Things are not looking well for our heroine Clary this week on Shadowhunters. Firstly the bloodoath she made with Iris kicks in and unless she finds the young warlock Madzie her life will be over. Secondly, most of Downworld now wants her dead too because news has spread that Valentine needs her to activate the Soul Sword that could kill them all.

Early in the episode, Simon and Clary are adorably making out when Jace walks in on them in the boathouse. Their romantic relationship is a departure from the books, but a welcomed one. Though I suspect that at some point the pairings from The Mortal Instruments series will come to be (ahem Clace and Sizzy forever), it’s still great fun to see the two characters interact in this new way. Also I must bring up this burgeoning affair between Raphael and Isabelle that is giving me lots of warm and fuzzy feelings that is also a change from the books.

After getting lectured by her older brother that she needs to be at the Institute because it’s the safest place for her while their fanatical father is hunter her down, Clary’s hand begins to burn, blackening into ash. The Morgenstern siblings go to Magnus for help and he informs that that it’s the effect of the bloodoath she entered with Iris. Unless she fulfills it, the curse will reach her heart and she’ll die. 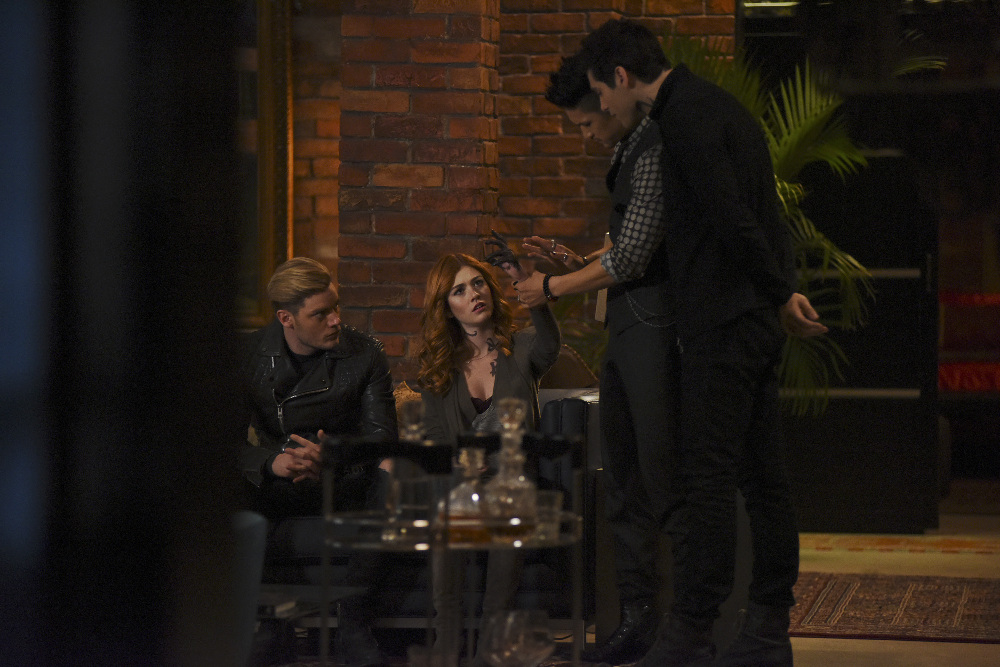 So Clary, Simon, and Jace end up tracking Madzie, while Luke meets with representatives from Downworld in an attempt to stop his kind from hunting young Miss Fairchild. Jace tells Simon to stay with his sister while he goes to look for the young warlock sensing that this was too easy. He eventually finds her with Valentine and proposes that either Madzie comes with him, or he lets Clary die.

Meanwhile the two lovebirds are on top of the van while Clary continues to weaken even further. The curse is almost to her heart and she’s giving Simon a tearful goodbye. He claims that she can’t die because it would be clichéd and too much like The Fault In Our Stars, which is only remotely similar because it’s also about young love. But thankfully Jace and Madzie arrive in time for the little warlock to remove the curse from Clary. But then she creates a portal and takes the Shadowhunter to her father.

Using Luke’s werewolf sense of smell, the three men are able to follow Madzie and Clary to the abandoned carnival where Valentine had moved his creepy experiments. Note, they had also been loosed upon the city and have been killing mundanes left and right. Likely it’s a distraction for what he has planned next and to possibly convince other Shadowhunters that his cause was righteous. Jace comes upon his sister by herself and breaks the chain keeping her captive. Then Valentine and Madzie appear, the young girl being controlled by the Circle leader. He manipulates her into doing what he wants with the promise of seeing Iris again and reminds her that Clary was the reason her nana got in trouble in the first place. Then Simon comes from behind and attacks Valentine, but the older man is the more seasoned warrior and he easily turns the table. Madzie then opens another portal and the rogue Shadowhunter takes the vampire captive. It seems like Clary just can’t keep herself and the ones she loves from getting kidnapped on a weekly basis. 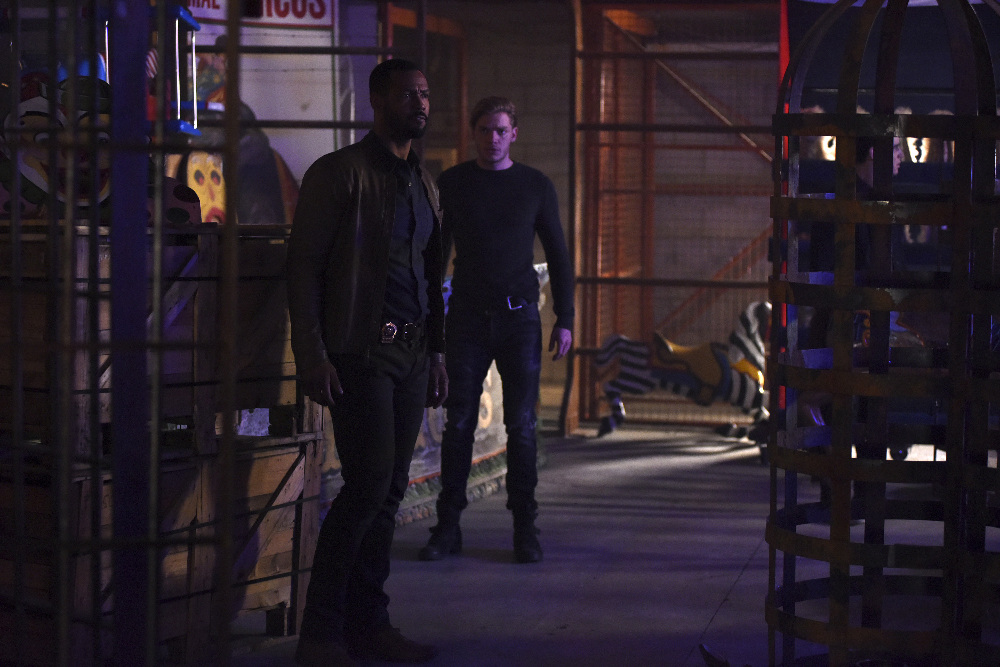 Additionally, Meliorn returns and proposes at the Downworld meeting that Clary should be executed on sight. Despite his feelings for Isabelle, Raphael agrees with him and claims that his people’s interests come first. That leaves Magnus and Luke who are not willing to execute Clary given their relationships with her. Earlier in the episode Maia attacked Clary herself in wolf form and for that Luke locks her up in a meat locker despite knowing that she has claustrophobia. She had been the one to spread that Clary was the key to activating the Soul Sword.

Loyalties were tested on Shadowhunters this week between friends, family, and lovers. What was more important, those you had personal relationships with or the greater good for the species as a whole? While Luke and Magnus of course didn’t want any harm to Clary, they certainly recognized that killing her would bring Clave upon Downworld even harsher and only give Valentine more fuel for his vendetta.

I also have to believe that Jace was just bluffing about wanting to save his own skin when he met with Valentine and Madzie and wouldn’t really let Clary die. I think he’s trying to outsmart the old man but it sadly backfired on him by not realizing that Madzie had been manipulated. If it had only dawned on him sooner, having experienced the same thing when he was a child being given Valentine’s special education. 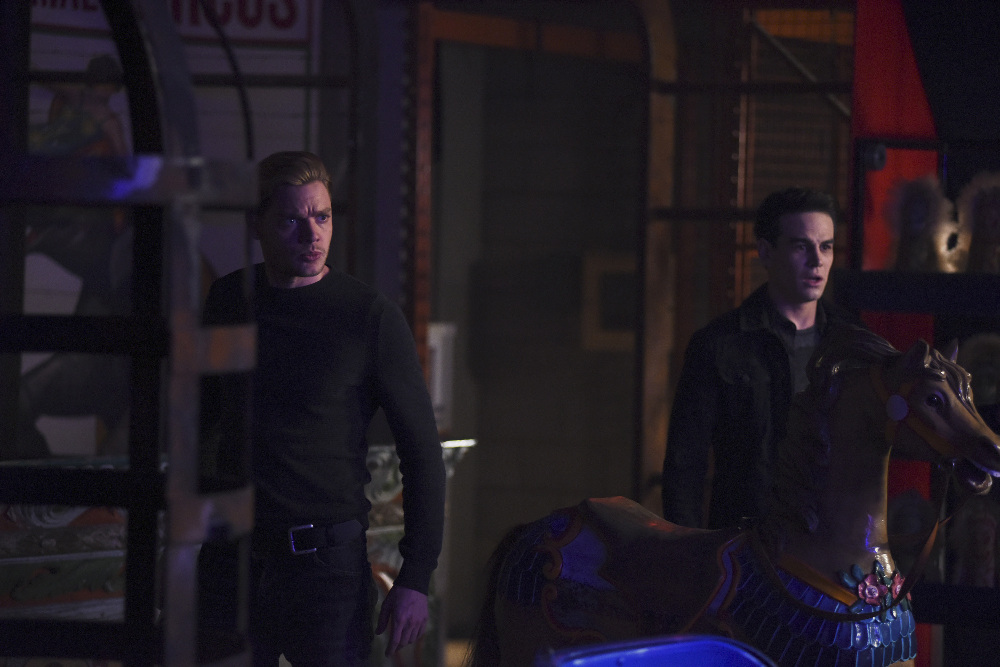 Meanwhile Alec also found out that Izzy had been seeing Raphael to feed her yin fen addiction and he catches the vampire feeding off his sister. Raphael tells the older Lightwood sibling though that he has genuine feelings for Isabelle. Magnus comes in and stops the fight and Alec reels on him for not saying anything sooner. He then storms off with Izzy in tow, but little sister is not having it. When they are alone she tells him to leave because Raphael saved her life and he didn’t even realize that something was wrong. Back at Raphael’s Magnus brings up a good point with the vampire that he needs to determine whether his feelings are real when he isn’t high off her blood. Fair point.

Season 2 has definitely changed things up a lot and it’s been refreshing to see the characters in new and interesting circumstances. For instance I wouldn’t have expected Clary and Simon’s burgeoning romance. It’s been such a treat to see Jace’s jealousy wanting to erupt, but he’s had to keep it in check because he believes that Clary is his sister and he can no longer feel the things that he undoubtedly still does for her. In the meantime I wonder if our red haired heroine has been so traumatized from having feelings for her brother to suddenly and tragically losing Jocelyn that she’s decided to cling to Simon to survive. Having her mother truly be dead must be the final straw that Clary’s running to the only thing that been stable in her life, her best friend. Perhaps she is really giving their relationship a shot because she’s afraid of losing him to Maia, though she may not be able to admit that to herself.

Still, these new storylines have made the show unpredictable but in the best way possible. With the winter finale next week, I’m sure we’ll be in for even more shockers.