‘Shadowhunters’: What Is The Mark of Cain?

On Shadowhunters this week, Simon is dealing with the effects of the mysterious mark that the Seelie queen had branded onto his forehead.

In the season three premiere, Simon was still at the fairy court singing to the queen, Meliorn, and others when he is soon ready to go home. The monarch however isn’t ready to let him depart quite yet and he’s taken to the Wander Woods and tied to a tree. Meliorn then takes the end of a staff with a specific emblem on it and marks Simon’s forehead as if he were branding livestock. The imprint glows brightly on his skin before vanishing. The Seelie queen then allows him to leave her realm with a parting warning that though he walks in the daylight, darkness will follow. Ominous much?

We first see the potent power of the mark in action in episode two when one of Luke’s pack members tries attacking Simon outside the Jade Wolf. Before the guy is even able to land a blow he is forcefully thrown back by an invisible force. Maia sees her boyfriend’s forehead glowing in the aftermath. In tonight’s episode the vampire confesses to his girlfriend that the Seelie queen had put this symbol on him and he doesn’t know why. All he’s learned is that only a daylighter could apparently survive the process. 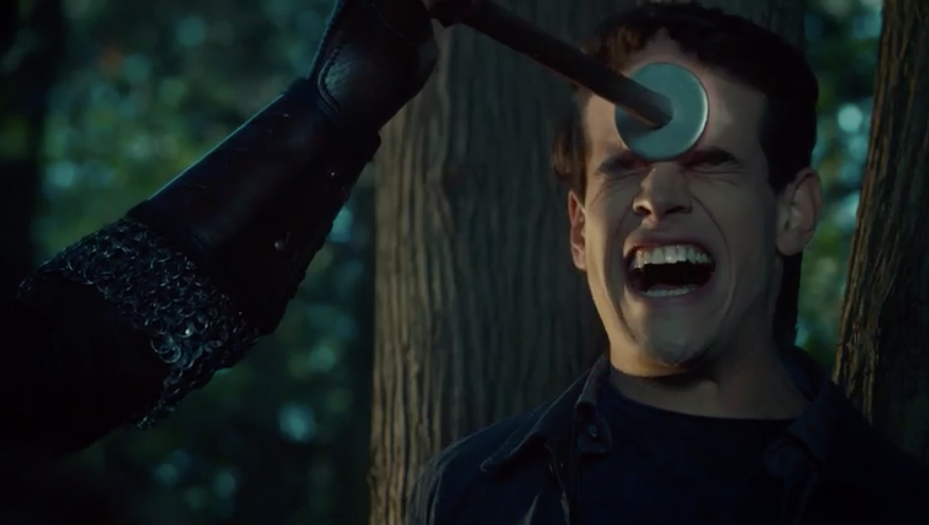 Maia and Simon head to the Institute to ask for Clary’s help in figuring out what this mark is. Unfortunately though, it’s not in the Shadowhunters’ Gray Book, which contains all the runes that the nephilim use (well except for the new ones that Clary creates thanks to the angel Raziel’s blood). Ms. Fairchild suggests that they ask Raphael in case this is more of vampire related lore. Simon is reluctant though but eventually sees no other option. Sadly it’s bad timing as the head of the New York vampire clan is grieving, having just lost his sister Rosa. The young daylighter doesn’t take no for an answer and continues to ask Raphael who then snaps and attacks. The mark activates and the elder creature is violently and powerfully thrown against the wall. He tells Simon to stay the hell away from him.

One other thing we know is that somehow anyone being rebuffed by this magic isn’t healing the way they normally do. The werewolf that first attacked Simon was still at the hospital with some serious injuries. Likely poor Raphael will experience the same.

Readers of The Mortal Instruments series know that Simon has been given the Mark of Cain. In the books, it was actually an angelic mark that protected the receiver from harm. Clary had given it to Simon in City of Glass during the time when Raphael and his vampire clan were hunting him down. At one point he was attacked under the orders of the Lilith, but a heavenly force struck the assaulter instead and reduced him to a mound of salt.

In City of Lost Souls, Simon raises the angel Raziel who reluctantly gives him the powerful sword Glorious as a means to sever the connection between Jace and Jonathan/Sebastian. In exchange however, the angel removes the Mark of Cain from the vampire.

While the television series has deviated from the books, there are still significant story arcs and elements that have crossed over. It’ll be interesting to find out if the mark on the show turns out to be an angelic rune or if this is Seelie magic. Speaking of which, to what purpose did the Seelie queen brand Simon for? She can’t just be concerned for his safety because the monarch seems quite strategic in her decisions. There’s bigger game happening that she’s undoubtedly planned for and it’s going to be such fun finding out what her true agenda is.

Till then Simon just needs to be careful and not piss off too many people.