On this week’s episode of Shadowhunters, we meet Jordan Kyle, an enigmatic new character who becomes Simon’s roommate.

We first meet Jordan (Chai Hansen) as Simon is walking while talking to Clary on the phone. He tells his best friend how he’s looking for a new place to live and she says maybe she can talk Alec to let him live in the Institute. But Simon knows that’s not an option and says that he still has some Bar Mitzvah money that he can use. As he looks at apartment ads on a newspaper, a bike messenger tells him to look out and the dude crashes into boxes and garbage cans. Simon rushes over to see if the guy is ok and offers to give him a ride to wherever he needs to go. The other man introduces himself as Kyle and says that he just needs to make a delivery in Midtown and then back to his apartment in Queens.

The vampire carries Kyle’s damaged bike up to the apartment and once inside discovers that it’s an awesome space. Not only is it super spacious with a pinball machine, but Simon spots a vintage electric guitar. Basically Mr. Lewis is in man cave heaven. Kyle says that it was a gift from his uncle after his family moved to the States from Brisbane when he was 11 (Hansen is Australian and they kept his accent on the show). He then starts chatting about how he’s in a bit of a bind because his roommate reccently left without a word and the rent was due. Well what a coincidence because a certain Downworlder needs a place to live! The bike messenger says no pressure though and to look around and see if he likes the place. Simon initially declines, believing that he needs a place of his own so that he doesn’t have to explain why he never eats and has a mini-fridge full of blood. Kyle adds that his place is rent controlled and that it seems like all three of them (including the guitar) would get along. Simon, from one New York resident to another you know how hard it is to get into a rent controlled building.

However, he is eventually convinced by Maia to take the place because it’s a great find. Simon then moves in his stuff, mini-fridge included. When Kyle points out that the apartment already has a bigger version of that appliance, the vampire explains that he just likes having his own and that he’s just very particular about his food. His new roommate says no worries and that it’s cool. Kyle does broach the subject one house rule that if Simon ever brings a date home to let him know ahead of time so he won’t be around because the walls are very thin. Simon has no problem with that. He then notices that the other man’s limp from the bike collision the other day is gone already. Interesting.

The next day, the two new roomies are playing video games when Kyle gets a phone call supposedly from his neighbor who has locked himself out of the building. Once he goes outside though, he answers by saying thanks for calling it in but that the caller should keep his distance. And who exactly is on the line? It’s Luke! He wants to come stop by tomorrow and just see how Simon is doing but is rebuffed by Kyle. The dude tells the alpha of the New York pack to let him do his job and that Simon Lewis belongs to the Praetor now. Cue ominous music! 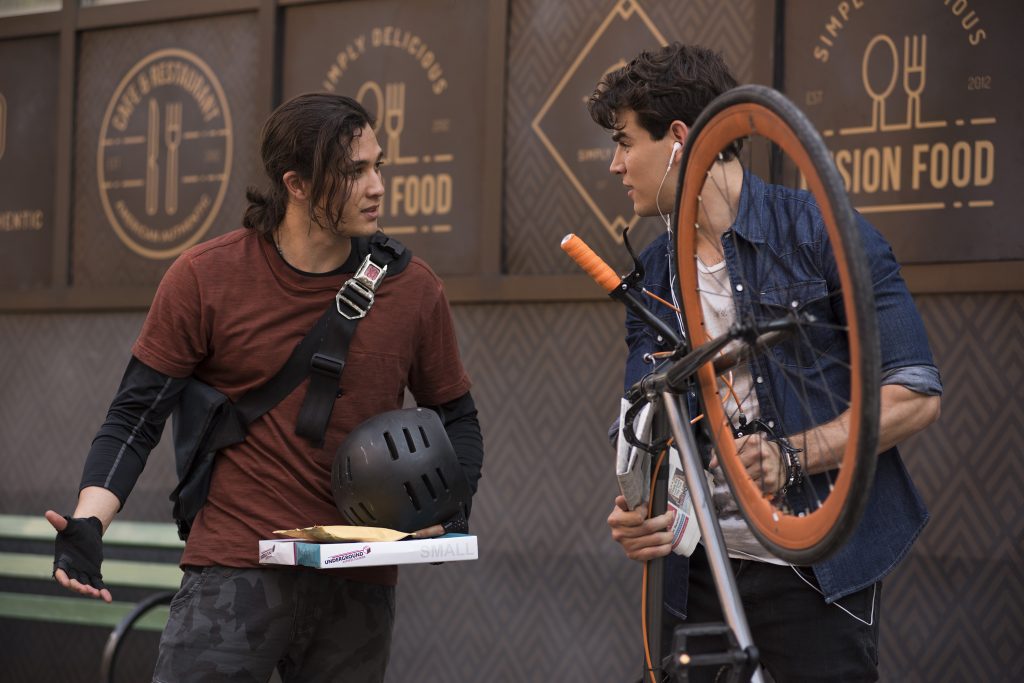 SPOILERS FROM THE MORTAL INSTRUMENT SERIES AHEAD

Tonight’s episodes gave us little clues about Jordan Kyle and who he might actually be, but book readers will know that he has significant ties to Downworld.

Kyle or Jordan, was the werewolf who attacked Maia (whom she had told Simon about last season). In the novels, they had been dating when he got into a fight with someone who turned out to be a werewolf and bit him. The change began to take affect and he became controlling, jealous, and filled with rage. He unfortunately took it out on his girlfriend. Maia wanted to end their relationship an eventually kissed another man in front of Jordan to end things. But it was bad timing as it was a full moon that night and he transformed into a wolf for the first time, biting her in his uncontrolled state. On the show, she tells Simon that she was scratched while walking home from a date with her new boyfriend.

After realizing what he had done, Jordan tried to apologize to Maia, but was stopped by the Praetor Lupus guardian who was assigned to him. The Praetor Lupus is a Downworld self-policing order of werewolves created in the 1800s by Woolsey Scott. The group’s purpose is to find young Downworlders and train them to manage their abilities. They then connect them to packs, clans, or a warlock mentor to guide them further into their new lives in the Shadow world.

Jordan joined their ranks and learned to control the change. Understandably, he wasn’t allowed to check up on Maia himself but was assured that someone was watching over her. After graduating he chose Simon to be his first assignment, seeing his ex-girlfriend’s name in his records. He figured he’d be able to learn about what happened to Maia through the young vampire.

With this in mind it makes sense why Kyle on the show asked Simon to tell him if he was planning on bringing a date home so he wouldn’t be there. Certainly he doesn’t want Maia to spill the beans and let Simon know who he really is. However probably she doesn’t know at this point that he is with the Praetor. He also wouldn’t want Simon to move out because protecting him would be harder, but also then he wouldn’t know how Maia was doing. In addition, do the Praetor Lupus have other plans for Simon now that he belongs to them?

Jordan may be waiting for the right time to reveal himself in order to apologize for what he’s done. Regardless of what happens on the show, things are looking mighty complicated for Simon and Maia this season.