Screenwriter J. Holtham Talks About The Cost Of Redemption In ‘Marvel’s Wastelanders: Hawkeye’

In this exclusive, we talk with Supergirl, Jessica Jones, and Cloak and Dagger screenwriter J. Holtham about his latest project in ‘Marvel Wastelanders: Hawkeye’. A Marvel Unlimited podcast featuring Clint and Ashley Barton set in the Old Man Logan universe.

Talk about a year of Hawkeye! Between Clint’s video game debut chapter last spring in Marvel’s Avengers, his highly-anticipated Disney+ series on November 24th, and now a 10-episode audio drama that’s releasing weekly on Marvel Podcasts Unlimited, Hawkeye has definitely hit a bullseye in the hearts of Marvel fans in 2021.

We got a chance to chat with Jason Holtham, writer of the Marvel’s Wastelanders: Hawkeye podcast. In this interview, we talk about the blind arrow master himself, Jason’s illustrious career writing about TV superheroes, and the importance of the theme of redemption; as we share all you need to know about Hawkeye, Ash, and the Wastelanders series.

The full interview is featured in our podcast but below is an abridged transcription.

The Workprint podcast is available on Apple Podcasts, Spotify, and Google Podcasts. 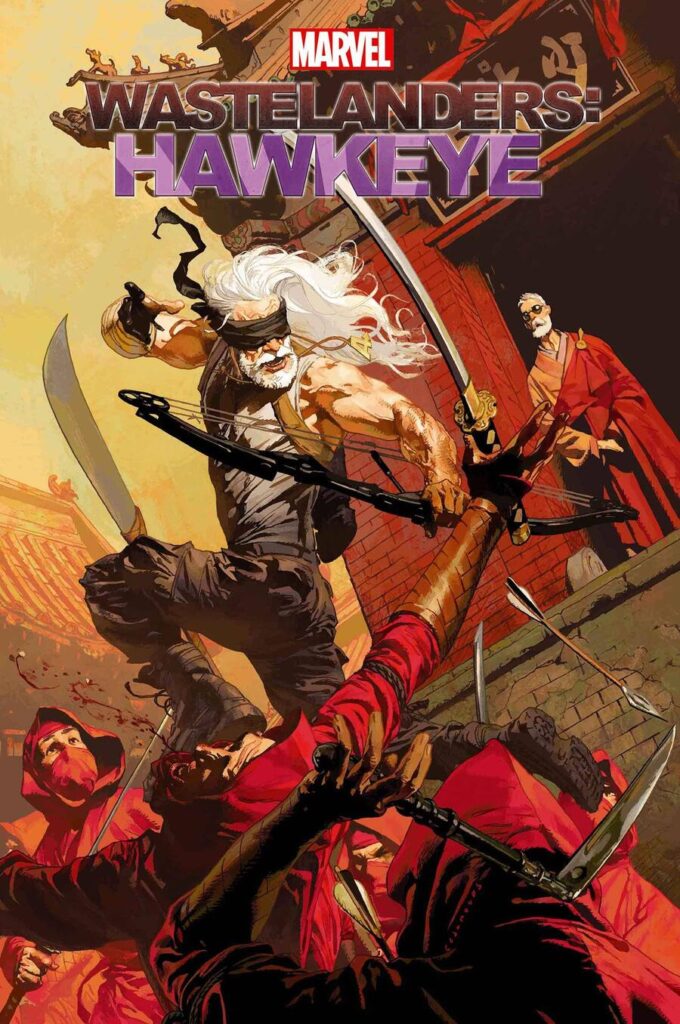 Your career seems pretty awesome! Can you tell us a bit about your journey from writing plays, to scripts, and now podcasts?

“Absolutely! I lived in New York and was writing plays and working in theatres for a long time. In about 2012, I made the jump to Los Angeles to pursue TV and screenwriting and wound up getting staffed on a bunch of Marvel and Comic Book shows: Cloak and Dagger, Jessica Jones, and most recently, Supergirl — which I was a writer on for their final season. Then, yeah, this fell in my lap. Marvel had these podcasts and I obviously had some ins there. This project seemed like a great marriage of my ideas and my material and it all seemed to work.

Though writing for podcasts is definitely a very different medium. There’s a very steep learning curve to it, learning how to communicate what was in my brain and into the audience’s brain without being able to visually see anything. The audio team helped me a lot in learning what sounds the brain could understand and what would be distinctive; because someone knocking an arrow down is a lot less distinctive sound than you might think. Getting used to telling people what they were seeing so they could imagine it was a different experience, coming from the stage and TV world of ‘show and don’t tell’, then learning: nope. You have to tell them a little bit. It was an interesting transition.”

For audiences unfamiliar with who Old Man Hawkeye is, can you tell us a little bit about him and the Old Man Logan universe this story takes place in?

“Absolutely! We’re in the Old Man Logan universe, where the central idea is that 30 years before the series takes place, all the villains of the Marvel Universe banded together and slaughtered all of Earth’s superheroes in a day. The villains then divided the country amongst themselves into little fiefdoms. Hawkeye is one of the few remaining hero survivors of V-Day, or Victors-Day, which is when the villains rose up and re-wrote history. Hawkeye’s now living in King Zemo’s domain in the western US, where the story is mainly set.”

Alright, so from ‘Supergirl’ to ‘Jessica Jones’ to ‘Cloak and Dagger’, what is it about the superhero comics medium you love, particularly writing strong women superheroes?

“Great question! I’ve been a comic book fan since I was a 10-year-old kid reading New Mutants, so it’s always been a world and a format and a kind of storytelling I found interesting. In fact, it’s one of the first places I learned about storytelling, so a lot of my natural writing inclination wanders back towards genre storytelling and getting to work with these worlds and characters.

As for why strong women characters? Why wouldn’t you? I don’t understand why wouldn’t you be interested in telling a story about strong and interesting and powerful women, especially given we live in such a misogynist and sexist world. Those struggles are primal and fascinating. And, as a black writer, it’s definitely something I connect with. That struggle for personhood. That struggle to be heard and seen. When I was 10, as one of the few black kids growing up in a mostly white suburb, reading the X-men as an outsider, and reading the New Mutants as a teen, meant a lot to me. I just wanted to tell stories that would do that for someone else.”

This takes place in a world where Earth’s mightiest heroes are gone except Hawkeye. In this grim future, can you talk a little bit about him as well as Clint and Ashley Barton’s relationship?

“ I mean, their relationship was the heart of it for me. I was writing this in the middle of the pandemic. In the shadow of the various uprisings of last year. So out of all that tumult, the big question that sort of kept raveling around in my brain was how do you, after something terrible happens, rebuild? How do you remake the world? There’s an argument between Ash, Clint, and Bobby in the story about what our responsibility is to future generations. What does justice really look like? What does it mean to let go of your personal vendettas to work for something greater?

You know, Hawkeye is a famously chill, optimistic, and bright sort of character. So putting him in this dark place, and then pulling him out of this place of hopelessness and cynicism, was important. Then you see Ash, who at the very beginning of the series was on the verge of vengeance until you see Clint as her father, and Bobbi as her mother, trying not to let Ash go down the path that they went down. There’s a lot in that, and in breaking the family cycle. I was personally unwinding and pouring a lot of that into those relationships.”

Here’s a funny question. How does blind archery work, and was there anything that you researched or that influenced you in writing a blind Hawkeye?

“I will tell you now: I did no research. Made it all up! But sure, there’s a glimmer of Daredevil in there with the echolocation. We went with the Hawkeye being partially deaf, and so having Stark-tech ear implants that could help him. Yeah, obviously it’s a little comic book-y, but there’s also just something I love about the image of a blind archer. And a blind archer that’s good at it! If there’s is anyone that could be that it’s Clint Barton.”

What is one big theme you hope audiences will take away from the series by its end?

“Redemption. That redemption comes at a cost. That it’s important, that it’s necessary, but it can be hard redemption… it will not always necessarily look the way you think it will. I wanted all these characters to find redemption at the end of the day.”

What was the most challenging thing about the creation of this series during the midst of the pandemic?

“For me, the most challenging part was making the shift to audio storytelling. Thinking about how to communicate what’s in my head into other people’s heads. Figuring out the structure was the biggest challenge. Production was complicated, but we were all pretty comfortable with zoom-like programs. It also made casting easy, as the reason we were able to get such an amazing cast was that many could do it from their homes. That definitely helped, but mostly, the biggest challenge was just thinking about how to communicate this story to my audience.”

Can you share any words of advice for anyone looking to become a screenplay or script writer?

“Write, is my always default response. Write a lot. And write about what really matters to you. Write about what you think is important and what you care about. The thing that is gonna ring true always: is the truth. And you gotta really make yourself comfortable with that and get really comfortable sharing as much of your real authentic truth as you can.”

That’s kinda all I got, unless you wanna talk about anything? The process? The weather even?

“LAUGHS. I mean, the thing I loved most about the process was honestly the research for me. Once I hit upon this setting, I really dug into Westerns. My big sort of touchstone was True Grit. I watched both versions. They’re both great, different, and terrific. I watched Clint Eastwood movies. I did not rewatch ‘The Assassination of Jessie James by the Cowboy Robert Ford’, but I love saying that title, and it was a big influence on building the ringmaster’s show. That was really the thrill. Getting to play in the sandbox with that kind of gritty character archetypes of these Marvel characters.”

So… I take it Westerns were your biggest genre influence?

“That was the biggest genre influence. Just cause of that feeling. That monument valley set in the desert feeling. If there’s any genre for storytelling regarding these grizzled old warriors who are pulled back in the fight: it’s the western.”

Totally, I can see that. I do like the father-daughter stories of surviving and finding redemption and vengeance and the difference between the two. Can you talk about Ash actually, and how her experiences mirror her dad’s?

“Ash to me is the fulcrum of the beating heart of the story. I really wanted to pull my own teenage angst into her and into that point of a person’s life of what kind of person am I gonna be? How do I really view the world and what do I want to pursue? Ash has all these forces arrayed around her: Clint, Bobby, and all the people at the circus, as she’s trying to figure it out. There’s so much that hinges on the choices Ash is going to make. At the end of the first episode, she wants to kill someone! It’s that question of whether she will go through it, and why, and what effect that has on her, and what effect that has on Clint? That’s the heart of the whole thing. And just coming back to that question as often as I could to try to answer it was my big goal.”

And that was everything! New episodes of Marvel’s Wastelanders: Hawkeye airs every Monday. It’s been pretty great thus far and features such great writing so definitely tune in. Special thanks to Marvel Entertainment and J. Holtham for this awesome opportunity.

An Interview with Marvel’s Peach Momoko