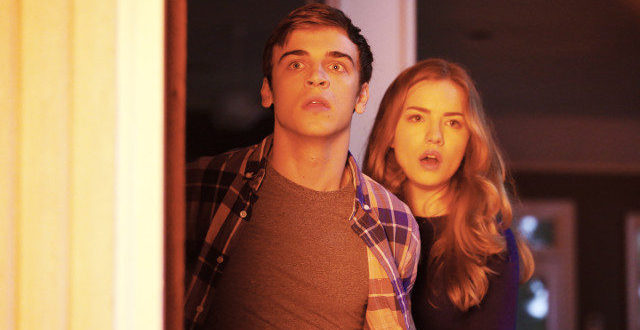 ‘Scream’ review: Phoning the right one in

And this is what I mean when I say this show is “frustrating”.

Last week, MTV’s Scream finally gave us something fun to watch. It wasn’t perfect but it moved things along and made me look forward to next week.

And what did we get this week?

A throwaway episode where every single character — including the Killer — do things that completely betray what they’re about for the dumbest reasons.

“Let the Right One In” (named after the famous overseas vampire flick — something I dearly wish this show would stop doing since the titles are pretentious and have nothing to do with what’s seen each week) is the seventh episode of Scream‘s sophomore season and, for an episode that really needs to continue to tell a lucid, compelling story, it seems a lot more interested in giving us insipid plot points and incompetent characters who change from one episode to the next.

When we last left the show, poor Seth Branson had it rough. First, Brooke broke up with him after teasing him with castration while he was tied up. Then, after Brooke left, he ended up losing a hand at the…er, hands of The Killer. The upside was that The Killer also cauterized the amputation by using a household iron. So that was nice of them, huh? We really never witnessed Branson’s fate after all that.

And we know it isn’t good news when Brooke receives a text from “Seth Branson”, telling her to come to him to “apologize” for what she did, lest she wants to be turned over to the police. But, Brooke is strong and doesn’t care. We saw that last episode. Which is why she agrees to meet Branson. It’s a good thing, then, that Audrey’s with her to encourage her to summon her newly-acquired Gurl Power(!!!)…by weakly telling her not to go to Branson, then giving in. Even after “Branson” tells Brooke to “meet him at the school” in his “old office”. And all Audrey can muster is “This is probably not good, but let’s go.”

They get this text from Branson while visiting the hotel room Brooke locked him in (room number “187”, by the way; even the show’s “in-jokes” are obnoxious and feel like a bad comedian trying hard, but failing, to make you laugh), a room which has been completely wiped clean. Blood is gone, bed is made (with clean linens), but the handcuffs and blindfold are still there, neatly laid out on the bed like a pair of socks and a tie. This obviously means a) The Killer cleaned the room himself or b) the maid staff is tolerant and open-minded and thought, “That must have been one hell of a night for these two,” before mopping up a pint of blood, changing the sheets and leaving the sex toys out to enjoy. If it’s “B”, they forgot the mint on the pillow.

Just last week, you had Brooke threatening Branson’s life and, here, she’s already rolling over and reverting to the airhead MTV has been feeding us for the last season and a half. It’s mind-blowing just how horrible this show can get…oh! I forgot. There was a camera watching the girls the whole time they were in there. Yeah. It was sitting next to the coffee machine with a BIG, RED BLINKING LIGHT that’s basically signalling to them and yelling “Hi, there” and neither girl notices it.

So, the twist here is that The Killer is trying to lure Audrey to the school. Which is why The Killer texts Audrey right after the hotel to tell her to “come to the school alone”. Except Brooke is with her and was originally invited, not Audrey. Didn’t The Killer tell Brooke to come to the school? Wasn’t that the idea established about five minutes prior to the scene with Brooke primping herself in front of a mirror for a man she hates and vowed not to go near? A man who betrayed her trust and who was taking money to stay away from her?! 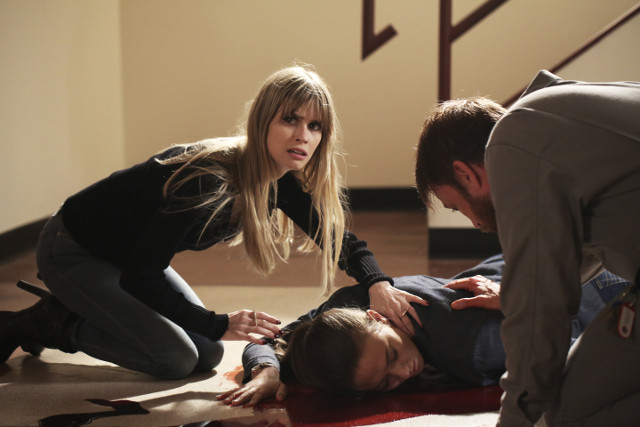 IS THIS SHOW FOR FRIGGIN’ REAL?!

And The Killer…hooo boy. They’re not off the hook, either. The Killer has one job to do: be creepy over the phone and occasionally appear with a knife. Sometimes, he/she chases victims around or attacks them or kills them and we’re like, “Cool! Give us more of that!” This week, The Killer does this, stabs an already wounded Seth Branson (who they used as bait to attract Ms. Lang) and then severely injures Ms. Lang by throwing her to the ground so hard, she cracks her head open and nearly bleeds to death. The problem is that the school’s janitor is there and he interrupts The Killer — who just bolts, leaving Lang’s body behind.

Audrey surmises that she was supposed to catch The Killer in the act so that they could pin the murder on Audrey which doesn’t make any sense considering The Killer already has footage of Audrey with Jake’s dead body. If that was truly the plan, why didn’t The Killer murder the damn janitor and stick around to finish her off?

And where is The Killer dumping bodies?

At a model home in the middle of property nobody at Lakewood ever accesses. Last week, I thought that “Eddie Kruger” was still in the bathtub at Lakewood Motel. He wasn’t. He’s in the bathtub at Casa de Killer. Folded up next to him is — you guessed it — Seth Branson. The same guy The Killer stabbed and then left behind to die when the janitor interrupted him. The Killer went back and got Branson. While he was bleeding to death. Leaving an unavoidable trail of human blood behind that nobody noticed? And, yes, I was wrong about Eddie being dead at the motel. PLEASE explain to me why nobody has reported him missing. 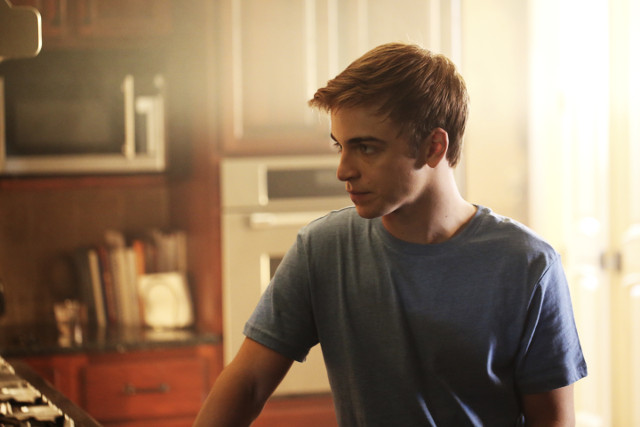 The Killer’s yuppie lair of doom is introduced to us, the audience, because Eli brings Emma there. If you’re not caught up, Eli is Keiran’s mysterious cousin who has made it his personal mission to get into Emma’s pants. Emma can’t really stand him and has told him that she isn’t interested in him. So, naturally, she agrees to go on a date with him to an abandoned housing project (that has no signs of wear and tear) so they can have dinner via lantern light with chicken and wine. “I like to pretend I have other lives,” Eli tells her. Not surprisingly, Emma plays that off like it’s no big deal even though there are enough red flags here to adorn the entire Chinese Navy.  In the cold open, Eli is shown breaking into a couple’s home while they sleep. He uses their toaster, eats some toast, tries on the husband’s sunglasses, then leaves. It’s all really weird — but it’s also fairly interesting. But the $64,000 dollar question is, “Will this be something?” Or will it be another obnoxious red herring that whacks you in the face, then sits on you like a giant elephant until you submit?

Their dinner is interrupted when The Killer sets fire to the place and, at that point, I really didn’t care if either one lived or died because I don’t care about Eli or Emma anymore. Eli serves no purpose other than to be weird and smarmy (and borderline rapey) to create an ill-conceived, D.O.A. “love triangle”. That’s it. And that doesn’t work when Emma’s shutting him down 24-7. It also doesn’t work because Keiran is as boring as Emma. He smolders and broods and carries a gun and talks back to the cops every two episodes. That’s it. So, when Scream insists on pushing this “Emma-Eli-Keiran” thing for nothing else than to appease the teeny boppers watching the show, I’m counting the minutes until we get back to something juicier. 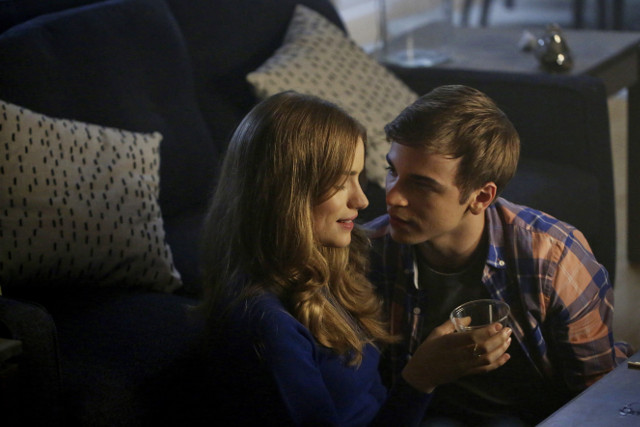 Like…Noah almost losing his virginity? Whoa. Ok. Yeah. To Zoey. For the love of…

Yeah, Zoey. The girl who shut Noah down, told him she wasn’t interested, apologized later on…she asks Noah out on a date. Well, to study…but it ends up being a beach picnic. She even brought Noah a pair of swim trunks which, if a guy did that for a girl, would be considered really sleazy. Here, it’s meant to be “cute”. The showrunners somehow even managed to get this gem on television:

ZOEY: So, how is your love-hate relationship with this body of water now?
NOAH: Uh…I…feel like a pretty big fan of the bodies NEAR me right now…

In the words of MST3K’s Mike Nelson: “No! Don’t you ever do that again!”

Then Noah decides it’s time to get laid. 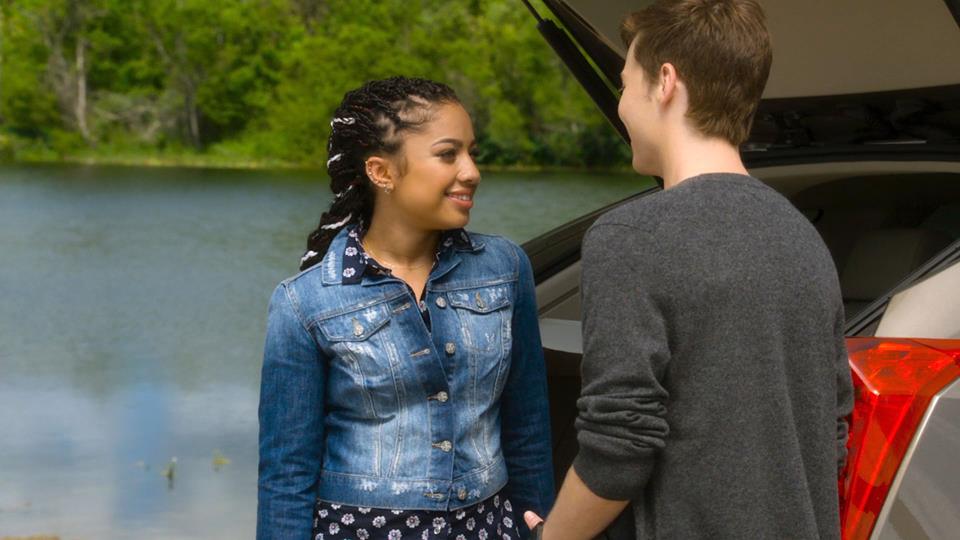 He visits his local Walgreen’s and agonizes over which condoms to pick up until a kindly old clerk helps him pick some for him, asking “Let’s at least narrow down your size…are you a big boy?”

Fear not. This leads somewhere. Before Noah becomes a man, he lets Zoey record her voice on his podcast microphone and saves the file to his desktop — next to Audrey’s confession file from last week so, while Noah goes to find a bottle of booze for the two of them to consume, Zoey e-mails the file to herself. Then she decides it’s time to get it on because nothing gets a woman hotter than finding out that your competition is a murder suspect. Fittingly, it’s Audrey who interrupts Noah and Zoey’s hook-up by complete accident because she bursts into Noah’s home like Kramer on Seinfeld. If horror film rules apply, that’s probably a good thing for Noah.

The other major plot twist (besides the fact that Seth Branson’s still alive as the bathroom around him burns…yay…more Seth Branson…) is that the Sheriff Acosta searches the “creepy abandoned farm” (the “creepy, abandoned plot line from the first episode of the new season) and finds a photo of Emma as a young girl posing with a guy whose face is scratched out — only he doesn’t let his police force know that he has it and only lets Emma in on its existence. A whopping three minutes is spent on this. The same amount of time was spent on Noah buying condoms. Twenty of it was spent on Noah getting some.

I think we can see where the show’s priorities lie.

This was a disappointing step down for Scream after the goodwill it offered last week. I wasn’t expecting brilliance or even a big turnaround tonight but I was hoping for consistency. It’s obvious the showrunners aren’t interested in providing that. At the beginning of this review, I said that the titles of the episodes bear little resemblance to what is shown to us. One could make the case that this week was about physical trust what with Emma and Eli, Noah and Zoey and Brooke and Branson. The issue is that, even in the short-term, these stories are awkward and uninteresting. And forget long-term. If the show gives us strong female characters last week and then gives us the same characters with their brains removed this week, they’re clearly not interested in “long-term” when it comes to anything.

They really should start to care if they want this series to continue.

Matt Perri is one of those literary Ronin you’ve never heard of until he shows up and tells you he’s a literary Ronin. He’s a native Californian, a film buff, old school gamer geek, and a sports/entertainment fan. A lifelong Giants, 49ers and Sharks fan, he also covers the world of pro-wrestling, writing recaps for WWE Monday Night RAW and Total Divas at Scott’s Blog of Doom. You can follow the guy on Twitter via @PerriTheSmark as well as here at The Workprint and his own blog, Matt's Entertainment.
@PerriTheSmark
Previous ’12 Monkeys’ Review: The Road to Titan
Next The Workprint Gamescast Episode 32: Fantasy Metacritic League