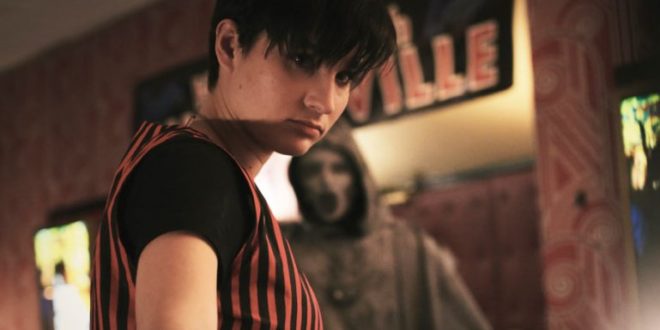 SCREAM
Season 2, Episode 1
“I Know What You Did Last Summer”
GRADE: C+

Not Quite GhostMcMeltFace 2.0 has found her. He chases her through Lakewood’s town movie theater, Audrey’s new place of employment. He’s already stabbed a theatergoer right in front of Audrey and made her bleed out all over the lobby floor.

What’s worse, he’s gonna tape the murder with a GoPro attached to his chest which I’m sure makes that company happy. He’s got Audrey cornered — when she spots movie prop weapons inside of a display case. Smashing it open, she grabs a knife — a very real knife; I suppose you have to fight off theater gunmen somehow these days — and stabs Melty in the stomach!

It was all a prank! The whole thing was a joke! The girl that bled out on the lobby floor? She was a friend of the “killer” and she used a blood pack to simulate the heavy bleeding! Just kidding!

The cops? They actually 1) explain to one of the pranksters that Audrey’s actions are in self-defense and 2) they let the girl who “bled out” go.

Welcome to another fun-filled season of MTV’s Scream, where the “horror” is D.O.A. and logic doesn’t matter.

Here, we find Emma and the rest of the survivors of the first season (dubbed “The Lakewood Six”; kudos to Noah for not making a “LOST” reference, either a missed opportunity or the producers overlooked it) as they try to carry on with life following Emma’s near-demise.

How have “The Six” evolved?

Audrey and Noah are still friends. Brooke and Jake are still dumb and climbing all over each other like human jungle gyms and Keiran and Emma are split up, but still friends. Kinda. Kieran’s horny and Emma’s unsure but sorta willing. They’re like that couple in high school who you knew were hot and heavy for a good few months or so but who broke up…except you see them hanging out together every so often, so you assume they’re together, but they continue to get it on…forget it. Everything’s pretty much the same, except Emma won’t put out — which is just fine with her on-again/off-again boyfriend Kieran. (Predictable Not-Really-a-Spoiler Alert: they’re kinda, sorta “back together” by the middle of the episode.)

Emma’s suffering from PTSD and keeps having dream of a pig farm where a little girl slaughters a pig with a big smile on her face.

“I’ve been having these dreams since I was a kid,” she says with heavy conviction, which is funny since she never had these dreams during Season 1 but, hey, this is a new season and I’m all for the invention of false narratives and exposition as long as it improves upon the prior season. Let’s do this.

And Emma’s not the only one being plagued by the past: the new “Killer” is pestering Audrey — and threatening to expose Audrey as The Killer’s Accomplice. Added to this new wrinkle is Noah who, unwittingly, may accidentally expose his very best friend before The Killer does.

What’s up with Brooke and Jake? Glad you asked. Brooke’s father is trying to make amends with Brooke who just isn’t having it while Jake’s dead.

In the series’ most goofy stretch, Jake gets knocked out, kidnapped, given the tools to escape his prison, then gets re-kidnapped and eventually killed by The New Killer who just gives not one fuck about anything except how to pointlessly prolong the death of somebody they kidnapped.

MTV’s usual goofiness aside, the episode cuts through the bullshit and delivers something watchable for a change. Yeah, there’s your usual “Noah Knows Everything” monologue and new characters to chew on and red herrings for days (the dude making pictures of Emma bleeding from her eyes is NOT going to be the killer…we know this, ok?) but the series’ second-season opener has what the first season lacked during it’s entire run: compelling storytelling and character development.

As silly as Emma’s “secrets” might be (The Killer is pasting photos of her near The Haunted Pig Shack of Doom), the idea that Audrey, the most fascinating character on the show (next to, I think, Noah), is being hunted by an unknown antagonist is music to my ears. I also love the duality and interaction between the aforementioned. Noah and Audrey are BFF’s — but what happens if Audrey’s soul is laid bare for Noah to see?

When I reviewed Season 1, I said that it was, “by all accounts, a failure, a colossal miscalculation”.

Here, the showrunners cut the fat, prey on one of the better characters on the show while killing one that isn’t of grand importance, and they make sure that we aren’t adding additional, unimportant plotlines or characters like we did the last time around.

I don’t expect much from MTV (and, seriously, who does?) but this was a good opener, a decent opener. Credit is given where credit is due…but the better question is this: how long can MTV keep this up?

Matt Perri is one of those literary Ronin you’ve never heard of until he shows up and tells you he’s a literary Ronin. He’s a native Californian, a film buff, old school gamer geek, and a sports/entertainment fan. A lifelong Giants, 49ers and Sharks fan, he also covers the world of pro-wrestling, writing recaps for WWE Monday Night RAW and Total Divas at Scott’s Blog of Doom. You can follow the guy on Twitter via @PerriTheSmark as well as here at The Workprint and his own blog, Matt's Entertainment.
@PerriTheSmark
Previous ‘Game of Thrones’ – “The Broken Man”: Family? What Family?
Next ‘Person of Interest’: “The Day the World Went Away” Review