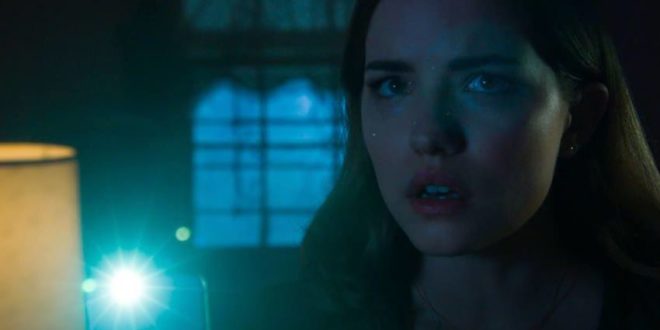 ‘Scream’ review: ‘Psycho’ in name only

Jake was killed off last week so, naturally, MTV’s target audience for “Scream” came back with their hands open ready for more shocks. MTV, however, doesn’t care what you want. MTV says, “You got your shock last week. We’ll give you more when we feel like it. Now go watch ‘Pretty Little Liars’, assholes.”

Then they create this episode.

Yes, that “Psycho”. The one by legendary director Alfred Hitchcock’s suspense-horror masterpiece of 5o-plus years.

“Psycho” (sorry, gotta hit my SEO quota here) featured an insecure woman who’s involved in a love affair with a decent, yet flawed guy — and ends up seeing her life suddenly cut short when she runs into a buzzsaw (or, in this case, a big chef’s knife) by way of the crazy Mrs. Bates at “The Bates Motel”, a seemingly innocent lodge in the middle of nowhere run by Bates’ awkward son, Norman.

This episode features kids in high school studying psychology. Emma’s a bit insecure. Kieran is a decent, yet flawed guy.

Also, the episode has a motel in it. Run by “Eddie Kruger”.

I can just see the well-meaning producers of “Scream” sitting there, crestfallen, as the awesome script they wrote as a homage to one of their favorite directors got neutered to the point where the motel clerk is a geeky dude talking about motel clients with “J-Horror hair” instead of a subtly creepy guy with stuffed animals in his parlor while the audience is force-fed the flavor-of-the-month bubble gum pop by an artist not named “Taylor Swift”.

This episode deals with the Lakewood Five and their quest to resolve some pretty heavy shit.

Those are the only three options to choose from.

Meanwhile, Kieran is underage and needs a “legal guardian” since his Dad is dead. All of this is nonsensical considering that Jake’s the same age and lives alone in his absentee parents’ house, but let’s go with it. “Aunt Tina” (Karina Logue) is there to make the save, acting as though she’s been there all along. She just appears out of nowhere, as if she’s been living under the sink this whole time, to reason with Sheriff Acosta who gives Tina and Kieran time to deal with the situation. Acosta, if you remember, is the same dude who let two aggravated assault suspects go last week. He’s nothing if not consistent. When Kieran gives the bad news to Emma that he may have to move, Emma is shattered.

Weren’t they not a thing last week?

She’s in the middle of her mid-teen crisis with this whole murderous pig farm thing and the creepy house next to it that contained a creepy stalker shrine devoted to Emma, which even her psych teacher dismisses as “hallucinations”. After all, the pictures and TV with static on it and beat-up easy chair weren’t there when Emma and her Mom (who has, thus far, been relegated to hanging out in the family kitchen with a mug of joe, serving up hot exposition that could have been oh-so-useful last season) checked the place out during daylight hours.

The ol’ “it-was-there-and-now-it’s-not” thing has been done. Originally, it was kinda cool because, done right (everything vanishes just a few minutes later after discovery), it made the protagonist look a few tacos short of a combo platter. It’s not effective when Emma just can’t figure out how stuff can disappear on its own twelve hours later.

But Emma powers through it. With the advice of her teacher, she goes back to the dock (where Piper nearly filleted her and her mother) to confront her ghosts, personified, in this case, by Ghost McMeltFace 2.0, who she sees from across the lake. Then she blinks him away. Yay! She’s cured! Now what? Well, to her credit, she came here with Keiran and he’s a dude she once had sex with in the middle of your lazy neighbor’s overgrown weeds last season, so we’re presented to some heavy petting in Kieran’s truck. It’s that anti-climatic and silly.

The entire thing is what’s wrong with this episode and, perhaps, the series: the deeper-layered stuff on the show is treated like a cheap plot device to advance the more shallow goals the writers wish to achieve. Brooke is hypersexual, applying a thick layer of red lipstick and showing off cleavage, ready for Jake to ravish her. Forget the fact that, to her, he’s a total cad who didn’t speak to her for quite some time. Brooke’s just a ditz who needs some and needs it now.

Case-in-point: Jake’s halfway out of the picture but Brooke feels the completely arbitrary need to flirt with Gustavo (Santiago Segura), the sheriff’s son while she’s waiting to report Jake as “missing” to the Lakewood Police. She does this even after he tells her that he “ranks the “Lakewood Six by number” for some reason. Mmmmm…creepy behavior is sexy…MAMA NEEDS SOME AND SHE NEEDS SOME NOW!

“Scream”, as we’ve discussed, isn’t at all subtle with their red herrings. Which is why we get Aunt Tina’s creepy son, “Eli” (Sean Grandillo), a kid who knows Emma but doesn’t go to school because he’s “thinking about attending here”. Y’know, since Lakewood High is just like Yale and Stanford and allows prospective students to wander the halls unattended.

Try Emma’s father coming back into her life. At first this is clever. The showrunners are obviously inspired by the “mysterious antagonist slowly stalking the protagonist with a beat-up car” thing from John Carpenter’s “Halloween”…until you realize where it ended up.

“WHY ARE YOU FOLLOWING ME???” Screams a tearful Emma after failing to outrun the creepy, beat-up car that chased her around the block.

“I was trying to figure out the best way to tell you I was back,” her father explains.

“The best way” to reveal yourself to your daughter is stalking her in a beat-up car, then chasing her around town?

To its credit, the best moments still come from Audrey and Noah. Noah loves horror but remains obsessed with the truth — something, he admits, “he won’t like when he finds it”. That’s because, as we’ve discussed, Audrey was Piper’s seeming accomplice in the first round of the Lakewood Murders. It’s a three-way cat-and-mouse game: while Noah hunts for the last piece of the puzzle, the Killer wants Audrey and is toying with her while Audrey wants to figure out who is behind the games and why.

One of the best moments in the episode comes when Noah’s about to add a little more color to the picture in his mind via “Eddie Kruger” at the Not Bates Motel. There’s a phone call. It’s the Killer — or so we think. They threaten Eddie with certain death if he tells Noah one more word. The camera cuts to the person calling Eddie: it’s Audrey. And she isn’t above saying some of the most gruesome stuff you’ve ever heard in order to make Eddie piss his pants in fear. It’s topped off by Noah meeting up later with Audrey in the parking lot, all smiles, checking in with her BFF who, she quickly finds out, is still very determined to get the information he seeks.

While Noah struggles, Audrey’s knee-deep in her own mess: the Killer leads her directly to the body of Jake with a nice note attached to it, taunting Audrey for her complacency in the first series of murders.

And it gets even more interesting when Zoe seems to be showing signs of getting a touch closer to Noah in class, something more that Audrey has to put on her plate. But since this is “Scream”, is Zoe part of Noah’s picture? Or is it just a “high school crush” as Noah puts it? The whole Noah/Audrey dynamic just works so well because the two actors have such chemistry together. They’re the only two people here who seem to be having any fun with the material.

This week’s episode is more-of-the-same. We’re in a holding pattern. The second season isn’t laugh-out-loud terrible like the first and that’s a very good thing. I’m still waiting, however, for that breakout episode that thrills rather than bores.

Matt Perri is one of those literary Ronin you’ve never heard of until he shows up and tells you he’s a literary Ronin. He’s a native Californian, a film buff, old school gamer geek, and a sports/entertainment fan. A lifelong Giants, 49ers and Sharks fan, he also covers the world of pro-wrestling, writing recaps for WWE Monday Night RAW and Total Divas at Scott’s Blog of Doom. You can follow the guy on Twitter via @PerriTheSmark as well as here at The Workprint and his own blog, Matt's Entertainment.
@PerriTheSmark
Previous ‘Persona 5’ Receives February 2017 Release Date in North America
Next ‘Person of Interest’: “Synecdoche” Review