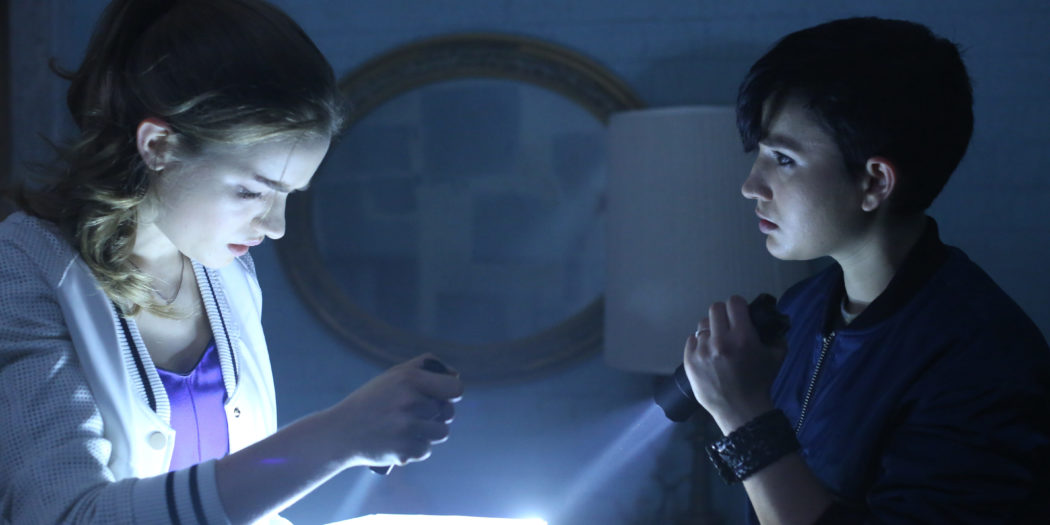 
MTV’s Scream picked a hell of a time to start being entertaining. Sure, Brooke’s basically replaced Jake with Jake 2.0 in ‘Stavo. Sure, there’s an actual deus ex machina in ‘Stavo talking Noah off the ledge by convincing Noah that he’s a hero and not a goat. Sure, we’re finally learning about Emma and Acosta’s relationship with the infamous Brandon James. Sure, The Killer invades Emma’s house while she’s slept for the 700th time and Emma still doesn’t have a security system to catch them. Sure, the episode spends a bunch of time trotting Eli out in front of everyone with “KILLER” written on his forehead in a lame attempt to throw everyone off the scent. Sure, the episode’s title pretty much tells you that two female characters are going to be wearing silver bracelets soon. The difference between the past and the present is that “Heavenly Creatures” (named after the esteemed Peter Jackson real crime film) manages to do all of that for the sake of character development and plot movement. What a concept!

When we last left The Lakewood Six (Minus Jake, But Adding ‘Stavo), Noah’s girlfriend Zoe had been abducted and drowned in a coffin in a lake outside the town, leaving Noah completely destroyed. Here, he’s in a hospital, a shell of his former self. His friends visit him to get him to come around by bringing him his favorite horror films which, even by the character and show standards, is incompetently crass: “We’re real sorry your wife was murdered, Tom…we brought you a copy of Seven to cheer you up, though, because we know how much you love that movie!” I mean, holy shit, even if Noah told them that he didn’t want to have anything to do with horror anymore or that his podcast was ending or for them to disassemble his Murder Board, who the hell think it’s a great idea to bring an assault victim movies about assault and blood and murder?!

In any case, no matter how much Noah wants to get out, they keep dragging him back in: Audrey finds a photo among Noah’s things showing Eli at Emma’s ex’s funeral. Even this doesn’t jar Noah out of his pity-me stupor, a photo booth strip of Noah and Zoe will and, soon, Noah’s ready to do a “farewell podcast” which pays tribute to his dead girlfriend. While Noah is saying goodbye, things are moving along fast: Emma, Audrey and Keiran attempt to make sense of Noah’s Murder Board to see if there’s anything they missed while Eli and his Mom feud over moving away from Lakewood to start over again — something Eli most definitely does not want. While the L6 suspect Eli, Eli’s living up to the role of Killer by vaguely threatening the mayor, Brooke’s father. On top of that, Ms. Lang is awake, something Acosta takes advantage of by running her through a thorough interview. The scene stands out simply because Acosta’s privy to death, first-hand. On top of that, he’s losing his son, ‘Stavo, in an emotional sense, because of that. “He wants to understand you,” Lang tells him. “He’s seen photos of the crime scenes you’ve been to.” It’s here that Acosta realizes that he may, inadvertently, to blame for his son’s behavior.

This is the main reason why Brooke and ‘Stavo have the connection they do: their parents have completely alienated them by engaging in the worst life has to offer. For Brooke’s father, it’s politics and financial corruption. For Acosta, it’s blood for breakfast and gore for dinner. Each time Brooke and ‘Stavo meet, it isn’t just to satisfy their mutual lust, it’s because they’re each other’s light at the end of a pitch black tunnel. When they part ways halfway through the episode, Brooke’s line, “You can go home but you don’t have to apologize,” actually feels like sage advice and not something the writers tossed in to sell more “cute” between the two. It’s also ironic since Brooke is actually the first of the two to reopen lines of communication with her father — which makes it all the more tragic, considering what’s in store for us at the end of the episode.

The entire episode culminates with a showdown/trap at the infamous “pig farm” that only seems to make an appearance when knives slash through air and bodies drop. Here, Emma and Audrey discovers that the house next to the pig farm has been inhabited by somebody — and that “somebody” may be close by. All of this because Keiran found photos of Emma and all of Audrey’s letters to Piper around Eli’s things. The visit to Emma’s home earlier in the show? The Killer took her “dream journal” (yet another “plot device” the show has suddenly created) and planted it in the house. Why? Strangely, The Killer’s plan is to frame Emma and Audrey for both the murder of Brooke’s father (a nice scene involving a pitchfork to the chest) and for the murders of everyone else in the recent Lakewood murder spree.

And doggone it, it actually works. There’s no happy ending with The Killer coming up short and getting away while Emma and Keiran make out and thank the baby Jeebus for the others company. It actually sets up the next episode. The downside? The finale. The Killer simultaneously released portions of Emma’s “dream journal” to the public, detailing the outright slaughter of her friends in that one dream she had a few weeks back while inter-cutting it with the footage of Audrey discovering Jake’s body in the storage place. Acosta knows, his police know, Noah knows — and Brooke knows. It’s just a little bit odd to be starting a feud between Brooke and Audrey at this point, considering that it’s going to be resolved in about 20 seconds next week.

Even still, this is the most impressive showing I’ve seen for MTV’s “Scream”. That’s huge due to the fact that the series’ future is largely up in the air due to poor ratings. With the penultimate episode of the second season, “Heavenly Creatures” not only manages to give its audience top-notch pacing and characterizations, it also ends up topping last week’s emotional series-best in “The Vanishing”. If “Scream” finishes well enough, that could be enough for MTV to greenlight another season for a show that, even with all its flaws, seems to have a steady conviction to entertain.

Matt Perri is one of those literary Ronin you’ve never heard of until he shows up and tells you he’s a literary Ronin. He’s a native Californian, a film buff, old school gamer geek, and a sports/entertainment fan. A lifelong Giants, 49ers and Sharks fan, he also covers the world of pro-wrestling, writing recaps for WWE Monday Night RAW and Total Divas at Scott’s Blog of Doom. You can follow the guy on Twitter via @PerriTheSmark as well as here at The Workprint and his own blog, Matt's Entertainment.
@PerriTheSmark
Previous ‘Dark Matter’: Who Will Betray The Crew of the Raza?
Next The Workprint Gamescast Episode 36: Telltale Games and the Narrative Experience