One of the repeated sins of MTV’s Scream is that the showrunners constantly feel the need to insult their audience. Week after week, we’re given pointless red herrings, bipolar characters and, of course, the dreaded “set-up with no payoff”. The latter is what the show does so well, it’s risen to artistic heights. In fact, in the first minutes of “Village of the Damned”, the episode throws a bunch of cliches at us: Lakewood is gonna have its “Lakewood Days Carnival” celebrating “100 years” and crowning the new “Lady of the Lake”. A bright neon sign flashing “KILLER ALERT” would have been much less subtle but that’s how we roll on this show.

Noah’s already on it: “Eager to move on, a wounded and misguided town concocts a flimsy excuse to celebrate which, in turn, instigates another round of bloodshed!” He warns them that “My Bloody Valentine” and “The Prowler” had set-ups like these. But nobody on the show has seen those and nobody in MTV’s target demographic would even know what those films are, much less care. But, enough about that! Brooke wants “positivity”, not “negativity”, you sillies! We’re goin’ to a damn carnival whether we get hacked to pieces or merely stabbed with a hunting knife! Woo-hoo!

That’s another beef I have with this show: the characters (Noah, most of the time) constantly recite this ridiculous pop culture-rich, self-aware dialogue, namedropping movie-titles like empty bullet casings from an automatic assault weapon, and then they move on and do completely asinine crap that runs contrary to everything that’s just been said. ‘Stavo even chimes in, warning everyone that “The Prowler doesn’t end well…for anyone,” and the characters shrug and we’re off to the next scene where the cops don’t know anything or Emma’s moping over Keiran. We get this all so Scream can keep it’s long-dead reputation for being “hip”. It’s really sad. 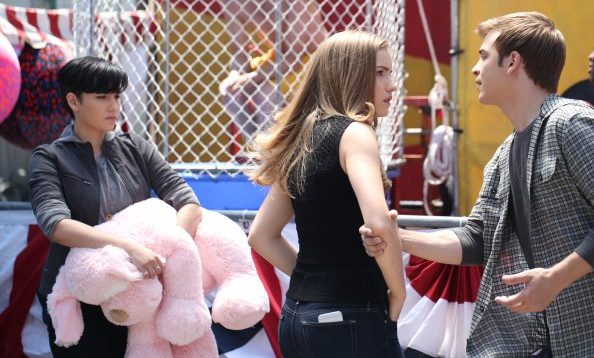 Most of the episode is Audrey vs. The Killer and it’s the same song and dance we’ve seen the last two and a half seasons: The Killer breaks into her room in the dead of night just to paint the words “12 DEAD”, in blood, on her ceiling. First, this is about the 82nd time, this show, The Killer has managed to sneak into somebody’s room while they’re asleep. And, secondly, the blood was directly above Audrey, meaning the Killer would have to basically stand next to her head to paint the words. How did neither Audrey or Emma awaken during the taunting? Has NOBODY thought to get an alarm system installed or a camera set up to catch the action? Why do these kids keep sleeping with the window open?

But, then, nobody in this town knows a thing about security. Just ask Lakewood’s Finest. In this episode, Acosta assigns a police detail to Emma. The killer still not only manages to get into Emma’s house to play with her hair like Lenny from Of Mice and Men, the officer’s lack of action nearly gets Emma killed near the end of the episode. On top of that, Acosta finds circumstantial evidence that all but leads to his own son being the main suspect which prompts him to harshly accuse his son of murder. Also, Acosta “reassigns” this case to Emma’s mom, Maggie, because she’s apparently the only person in town to autopsy the bodies found in last week’s burned-up house — one of which is confirmed to be Seth Branson. “I got a print from the hand that wasn’t severed,” says Maggie — and I won’t even question how she got a fingerprint off a corpse that was burned to charcoal when she could have just used dental records. And while Branson outlived his usefulness at the end of last year, it’s also really strange that the showrunners would keep him around this long, then tease him possibly surviving the fire, only to kill him anyway.

Audrey finally resolves to tell Emma everything that happened with Piper, something that should have happened about two or three episodes ago had we not been exposed to kids puking up tainted Tequila or Noah and Zoe constantly trying to play the naked version of “hide the suspect”. If Audrey’s overtures to Piper were really a good idea-turned-terrible, then what would Emma care? But, here, we’re supposed to pretend that Emma and Audrey’s friendship would be completely demolished if the truth got out — despite the fact that Emma and Audrey really haven’t built up a believable enough rapport, so that’s really asking a lot. 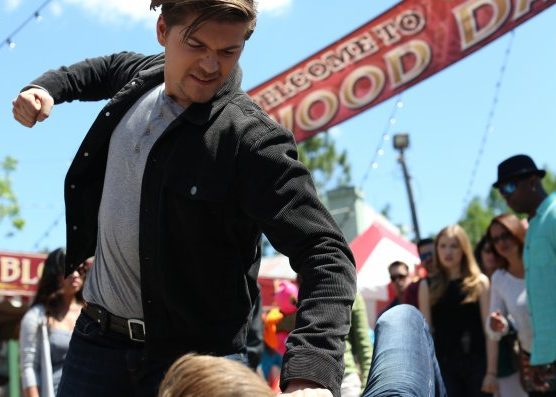 Emma, by the way, has resolved to also “tell the truth” — though I’m sure, with the way the writing on this show has played out, Emma will be back to telling half-truths and obfuscation by next week. She turns Eli into Sheriff Acosta who just cannot believe Emma would go with some strange guy to a dark, abandoned place in the dead of night. Either we’re being trolled here or Acosta had a moment of growth. It’s here where we learn that Eli has a knack for sneaking into other people’s homes and hanging out there. Eli also tells that Keiran’s tense because he had a falling out with his parents. Keiran isn’t pleased.

And it’s on to the carnival where Brooke and Zoe prepare to go one-on-one for the Lady of the Lake. I could swear there were at least 10 other girls running for this but they’re not interesting or the main characters. Zoe’s all dolled up — yet goes on a mini-date with Noah where they nearly end up having sex in a photo booth. Ever the rebel, Zoe also brought a flask with her to “self-medicate” as Brooke puts it. And because Brooke’s level of incompetence in this episode of Scream has been set to “You Won’t Believe What I’m Capable Of”, she downs the entire flask after telling absolutely nobody that she “hasn’t had dinner yet”. The upside to this is that it gives us another moment involving Brooke shaming the entire town for having a celebration in the midst of another set of murders. The problem is that the shaming and rejection of this grandiose party is sprinkled all over the episode, removing most of the emotional resonance — but it’s still worth watching because we haven’t really yet seen Brooke’s anger and sadness surface beyond her immediate reactions at the school following Jake’s death.

And she’s not the only one venting her anger: Eli and Keiran finally come to blows regarding Keiran’s past, vindicating Eli’s assertions that Keiran’s dangerous — and that frightens Emma to no end. But what happens when the hunter becomes the hunted? Keiran is apparently kidnapped by The Killer who forces Emma to traverse the carnival’s funhouse — where, literally, almost nothing happens and Keiran is “unmasked” as “The Killer”. This is a real downer and an unbelievable red herring if the showrunners are asking us to believe that the possibility exists that Keiran did this to himself as it’s obvious that, by the end of the commercial break, Keiran’s a free man and cleared of suspicion. 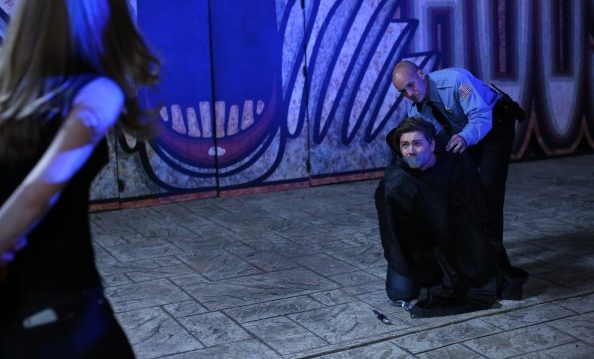 Oh, right! This episode was about Audrey and her personal battle with Ruining Her Friendship With Emma™ by telling Emma the truth about Piper. After cockblocking Noah again (she doesn’t have to show up at his room this time, she just attempts to phone him up during sex which, more or less, minus the murder, makes her as aggravating and annoying as The Killer), she skates over to Emma’s house — only to find out that Emma is listening to the audio file of Audrey’s confession on her phone, presumably sent by Zoe. So, for better or worse, Audrey has no more secrets and we can finally move on to a final act that doesn’t include the Killer sneering, “I’m gonna tell everyone about you if you don’t go to Emma’s house and eat all her cats” every fifteen minutes.

While “Village of the Damned” isn’t nearly as rotten as last week’s endurance test, “Scream” still unashamedly gives its audience more of the same, with just a slight mix-and-match concerning the characters involved. The upside is that what we saw this week may, in fact, be a means to an end — which is music, not only to my ears, but to the ears of the overall audience who, I know, has been patiently waiting for what’s been a fairly elusive payoff.