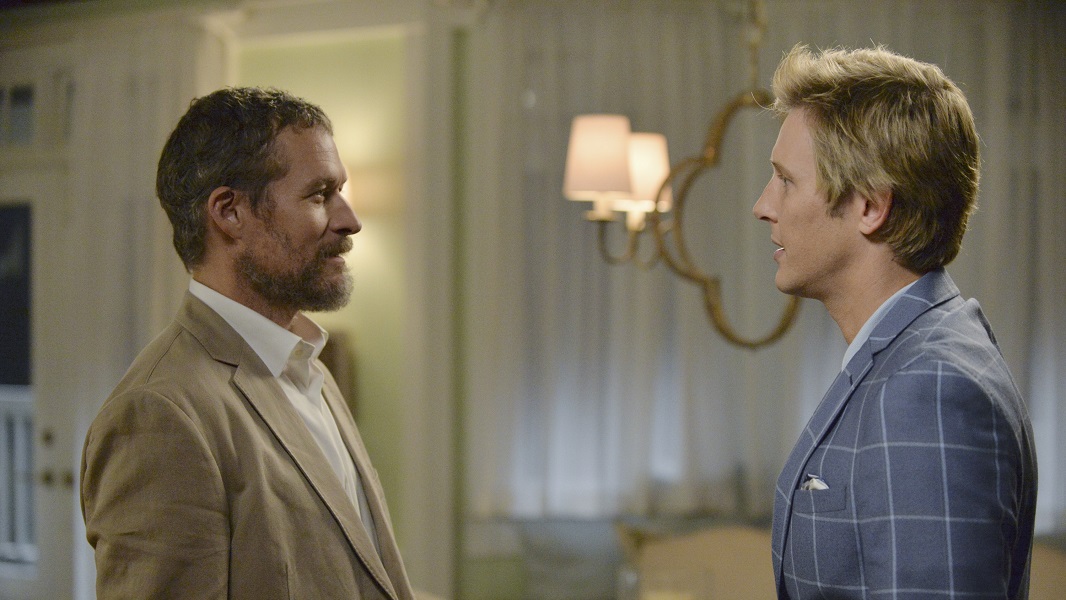 I can stand a lot of crap on this show. Let’s face it: it’s a soap opera made from the Dynasty/Knot’s Landing factory of cheap melodrama. I grew up with those shows and I shrug off a lot of what I see because it’s relatively minor…but now, Revenge is straying into Lost territory, withholding answers for the sake of withholding answers. Delaying for the sake of delaying. I’m well aware that if Emily/Amanda marches next door and says, “David, I’m Amanda Clarke, your daughter”, then this show is pretty much over. Since we have 18 more episodes to fill (at the very least), we’re probably not seeing a reunion any time soon.

What we did see was aggravating:

Remember the dude who tried to flatten David Clarke outside his hotel last episode? The one that kidnapped Charlotte Grayson after the nightclub date? He’s dead. Charlotte killed him. By him, I mean “Vince”. But, honestly, who cares? He was around all of two minutes before Charlotte managed to take him out. Between this and setting fire to The Stowaway, nearly killing Emily, Charlotte might have a future in the CIA. And who does she call for help? Emily, the girl she almost killed by burning down the Stow–you know what? I already said that. Anyhow, Emily inexplicably cleans up after her mess, lies about the guy’s affiliation and then drops a bomb on Charlotte: her Mom, Victoria, killed Aidan. This is the final straw for Charlotte (because Victoria and Conrad’s lies about Emily just weren’t enough) and she decides to give the finger to her Mom and check into a rehab facility. The last person she sees is her brother, Daniel, to tell him all about Emily…speaking of Emily, she decides to follow the tracks of the now-deceased Vince and finds the place where her father was supposedly kept all these years.

Nolan wants to join her but he’s a bit busy with David, “the father he never had” as he does a major interview for Margaux’s news company with a nervous Victoria watching it all from behind the cameras and floodlights. At first, everything goes according to plan, with David talking about his imprisonment and his inspiration for staying alive. Then, surprisingly, he asks Nolan to join him, on camera, so that he can thank him for all his hard work in helping his daughter while incarcerated. Nolan is shy and remains humble — until David asks where all of the money he allocated for Amanda went. He accuses Nolan of stealing it, letting Amanda die and then buying himself an expensive house, cars and other items. Since Nolan can’t reveal that Emily is really Amanda (and there’s still no real reason why not except to stall for time), Nolan remains silent and walks away from the interview. Not quite satisfied, David confronts Nolan in private and lectures him for what he did. Nolan fights himself, trying hard not to reveal Emily’s secret. David punches him in the face, which gives us this nice exchange:

Nolan: “I thought I was the son you never had.”

David: “If I were your father, I would have done that a long time ago.”

It isn’t until right after that moment that Emily walks in, fresh from her trip to Camp Clarke, that she sees the damage her father’s done to Nolan. The writers even make sure to hit the Don’t Show the Smoke Monster button by showing Emily’s face as she watches her father walking back home, just a few torturous feet away. When Emily asks Nolan what happened, Nolan’s only response is, “Your lies have finally caught up with me.” He begs Emily to tell David who she really is. And Emily still says no. Why? She discovered that her father lied about being held captive. And if her father’s lying about that…THEN WHAT ELSE IS HE LYING ABOUT??? *GASP* That last part is supposed to make the viewer go, “Awwwwsyeah, it’s on like Donkey Kong”. Unless you don’t say that. Or think about what Emily just said. Because that still makes no sense and can’t possibly stop Emily from revealing anything.

Jack Porter is still a cop this week but has a bit of a partner’s quarrel with Ben who wants to re-open the Conrad Grayson murder case despite Jack’s insistence that he should Leave it Alone (do a shot – this is a weekly thing now) and move on. But Ben can’t do that. You see, he found out that the cop who beat up Conrad in prison is now dead. After interviewing the cop’s daughter, Ben runs into Jack and, after a brief argument, they discover the “Double Infinity” symbol etched into a wood post. And, ruh-roh, it’s on like Donkey Kong, Jr.! Right?

In any case, the rest of the episode deals with Louise and her weird obsession with Victoria. First, she gets her tabloid article which, apparently, means nothing at all to anyone — including Margaux who I thought liked Daniel but nothing makes sense anymore and I’m starting to think that everyone’s really in purgatory and headed for a giant church. Anyhow, Louise confronts Victoria and just wants a mother figure back in her life. Victoria brushes her off like the nutcase she is and this story is just going nowhere. Even if they’re trying for “Louise is really Victoria’s secret daughter”, that’ll come off as cliched. Even for this show.

Lastly, David’s obviously started some shit with his expose of Nolan and the beginning of his revenge plot. He sits on the beach until Victoria approaches him. He tells her that with Amanda dead and gone and Nolan out of his life, Victoria’s the only one he can trust — and he wants to move in with her.

After six episodes, we’ve seen virtually the same episode told different ways. Louise wants Victoria, Emily won’t tell David who she is and neither will anyone else. Ben thinks there’s something janky going on about something some place and Daniel can’t keep it in his pants and acts like a giant douchebag. The only thing different was Vince and he was dead by the time I was done nuking my Instant Ramen Noodles. I’m really hoping for a little more velocity in the coming weeks or else we’re heading for a crash landing instead of a happy homecoming.

Matt Perri is one of those literary Ronin you’ve never heard of until he shows up and tells you he’s a literary Ronin. He’s a native Californian, a film buff, old school gamer geek, and a sports/entertainment fan. A lifelong Giants, 49ers and Sharks fan, he also covers the world of pro-wrestling, writing recaps for WWE Monday Night RAW and Total Divas at Scott’s Blog of Doom. You can follow the guy on Twitter via @PerriTheSmark as well as here at The Workprint and his own blog, We Hate Your Gimmick.
@PerriTheSmark
Previous The ‘Minions’ Get a Trailer
Next Marvel Releases New ‘Agent Carter’ Footage Plus ‘Ant-Man’ and ‘Ultron’

No matter what happens, we're sure The Good Place will catch us off guard and all of our theories will be thrown in the trash faster than Blake Bortles. The Good Place is back, baby!