Doom has been long in development over at id Software, with a beta key even going out with Wolfenstein: The New Order back in May of 2014 (even though we still don’t have a release date on the beta), but there is finally light at the end of the tunnel. Bethesda has announced that Doom will be coming to PlayStation 4, Xbox One, and PC on May 13, 2016. In honor of the announcement they even included a new trailer.

What would a video game be today without releasing a Collector’s Edition? Alongside the trailer, Bethesda also announced the details for the Doom Collector’s Edition. The centerpiece of this set will be the 12″ statue of one of the game’s demon, the Revenant (for those wondering, no, it does not look like Leonardo DiCaprio). The statue will be made by the company TriForce, and will be heavily detailed, as they used the actual game files from id Software for the design. The Revenant will even feature an LED-lit base (See if you can resist this one Rob). Outside of the statue, the Collector’s Edition will feature the game in a special metal case and will run you $120. 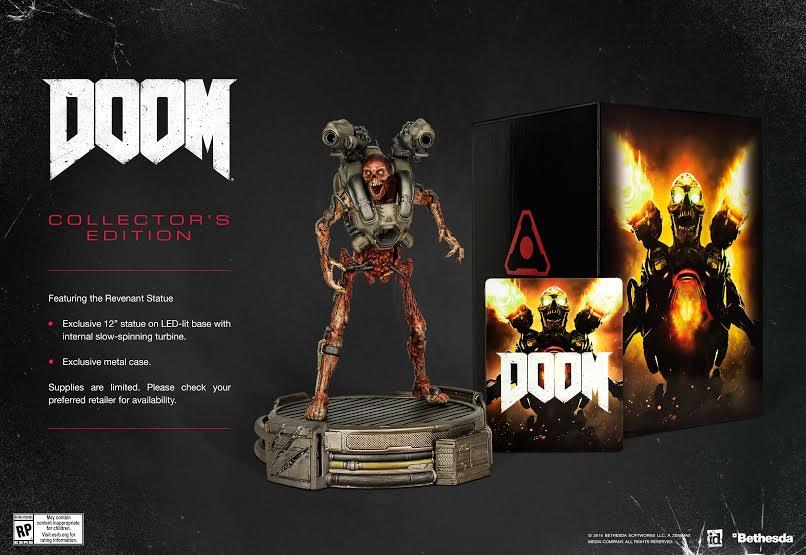 While no digital goods come with the Collector’s Edition, anyone that preorders the game will receive the Demon Multiplayer Pack. It will feature three skin variations, six paint colors, and three id Software patterns for your armor and weapons, as well as six Hack Modules which is said to “give you an edge” in the arena. While they can only be used once, I am still not a big fan of anything that may give you an unfair advantage online.

Are you excited to finally see the release of Doom? Are you like Rob and buy every Collector’s Edition with a statue, regardless if you will even like the game? Let us know in the comments down below!