I am not sure why they are calling this season of Pretty Little Liars the Summer of Answers, because I leave each week with at least twenty more questions, and having none of my previously questions answered.

To start the episode off, Alison meets the Liars to divulge her new information on Charles DiLaurentis. Ali’s father revealed Charles was indeed a real person, and was the eldest of the DiLaurentis siblings. He was a troubled boy and before his second birthday he was admitted into Radley, to ensure the safety of his brother and sister. I mean granted he tried to drown his sister in a bath of scalding hot water, but still, a two year old? Mr. D hid the truth of Charles from Ali and Jason so they could have a “normal” childhood without the distraction of their crazy brother. He looks at his kids and tells them that Charles didn’t leave Radley alive. He committed suicide at 16, and therefore in no way could be A.

The Liars are not eager to accept Mr. D’s tale of Charles demise. Hanna sums it up the best: “No body. No grave. No proof!” The gang sinks its teeth into the new mission of obtaining Charles’ private and confidential health records. The one kink in their plan is that Radley is currently shut down. Proving yet again that she is the worst Scooby of the bunch, Aria investigates Charles by typing the following search terms into google: “Charles DiLaurentis death record” and “Charles DiLaurentis obituary.” Suffice to say, her search is fruitless. 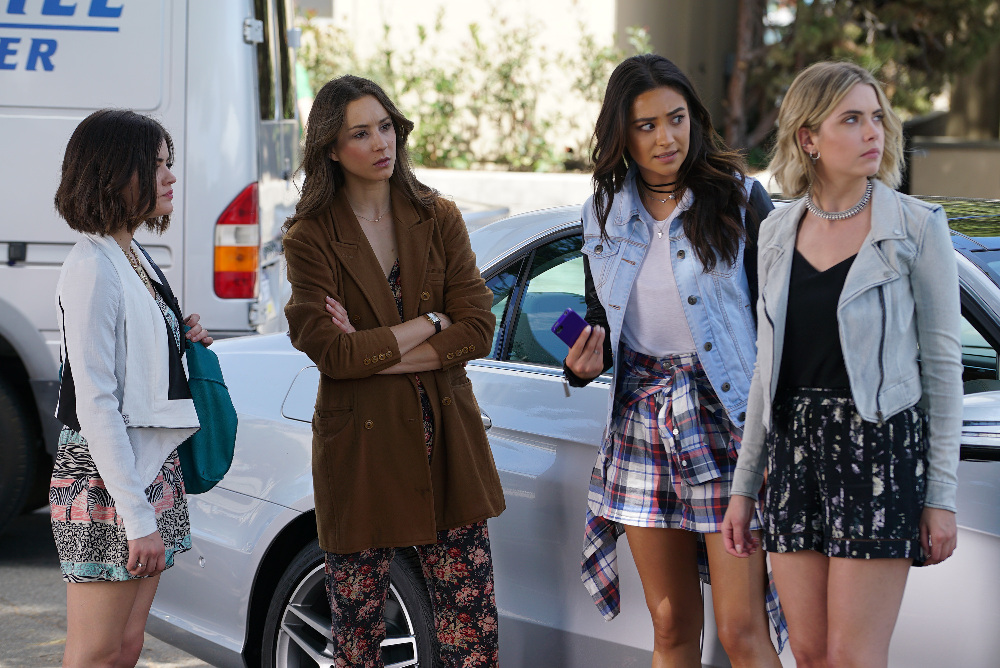 Since Spencer is not inept in the art of detective work, she obtains information about where all of Radley’s old files are being shredded. She gathers the girls and heads to the storage facility to obtain Charles’ patient file. They sneak into the building through the backdoor that is literally wide open, and search for the Charles DiLaurentis pin in the file warehouse haystack. Lo and behold the great Inspector Aria finds Charles’ file but only records from age thirteen to sixteen are present.  Despite only acquiring records accounting for a quarter of his time in the institution, the Liars discover that only two people ever visited Charles: his mother and his great aunt Carol (both of whom are presumably dead). They think Mrs. D helped Charles escape, and was hiding him in Aunt Carol’s abandoned house.  Jason, Ali, Spencer and Hanna head to Aunt Carol’s house searching for a living Charles. When they get there, they find Charles’ grave which Jason confirms has been there for ages due to the pattern of ivy growing on the headstone. And with that everyone seems content with declaring Charles officially dead.

At the casa de Field’s, Sara is scrutinizing her new haircut in the mirror. Emily tells Sara that she loves the new dykey due.

Before Emily invites Sara to march at this years Pride, Mrs. Fields enters the room. Pam has made appointments for the girls to go and talk to Dr. Sullivan about their trauma. Sara say no thanks and jumps into another shower, but because Mrs. Fields is her actual legal guardian, Emily isn’t able to get out of the appointment so easily. Pam pulls Emily aside later to discuss how she is worried about Sara and the responsibility of housing her, but Emily is sure that she can help Sara get better, because she knows what Sara has gone through. Pam, tries to explain to her daughter that while whatever Emily experienced, it is not the same thing Sara went through. Sara was there for three years, alone with A. Sara overhears this whole conversation, runs away but realizes she misses Emily too much. The pair meet at The Brew where they try to officially decide who is wearing the gayest outfit. Sara also explains that after her three years held captive, she just wants the simple things in life. Like swimming and make out with Emily. So Emily brings Sara to the pool to go swimming, and proves that nothing that she had with Paige is sacred anymore. On a plus side Paily fans, at least they didn’t make out?

Meanwhile, Spencer is still struggling to sleep since leaving the dollhouse. While kidnapped Charles tortured Spencer by playing a siren every time she fell asleep. The first night that Charles actually let her rest, Spencer woke up drenched in someone else’s blood having no idea of how it got there. So yeah, Spencer’s sleep issues are understandable. She is so desperate to sleep, she even rummages through actual garbage searching for Aria’s discarded sleeping pills. 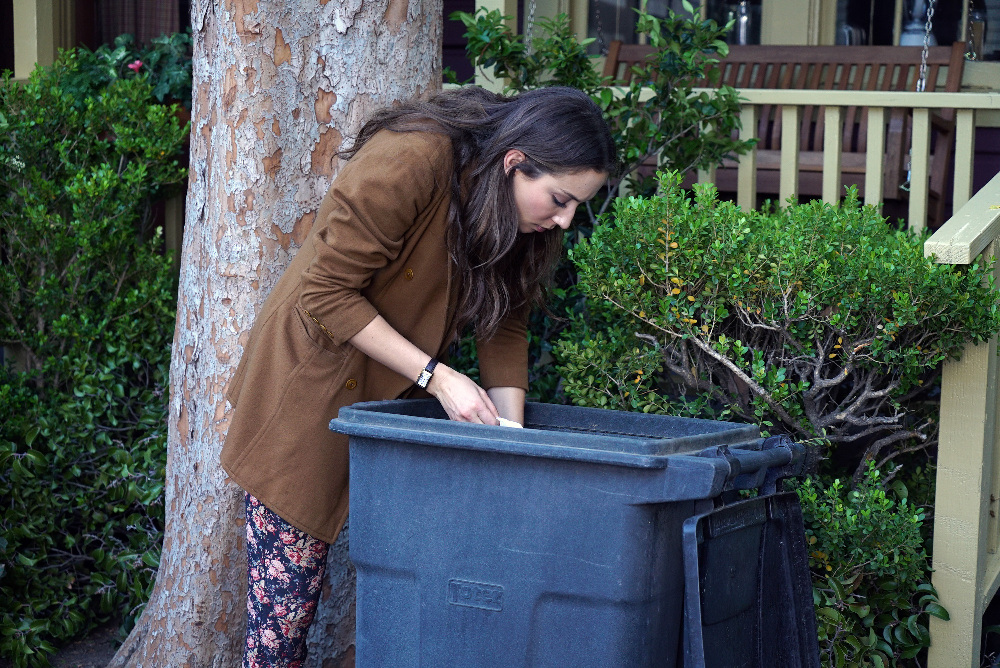 Spencer heads to The Brew to find Sabrina, Ezra’s new baker who is apparently a huge stoner. For the first time this season (or ever) Ezra is somewhat useful. She walks up to Sabrina who she has never actually talked to before and pretty much goes “So you know my story. Can I buy pot from you. Like just some brownies or whatever?” Sabrina explains that she is a pothead, not a dealer, so no she cannot sell her weed, but she could make her edibles free of charge. Oh man, the things that happen in Rosewood. Ezra catches Spencer as she is leaving with her special pastries and tries to expel some wisdom. Just as Aria’s has done every other episode, Spencer tells him to shove his sage wisdom up his ass.

Ezra does make one great point this episode. He tells Spencer that things are a bit safer because entire town is now looking out for the Liars. This is so true, and I think is great for the storyline because it takes away some of the power that is given to A. Everyone is on high alert and they are not going to so quickly look away when something strange and unusual occurs.

Aria’s dad has decided to come back from wherever he was and try to start parenting. Byron tries to get Aria to spend some quality time together, but Aria would rather develop the thousands of pictures she has been taking recently.  While developing a ton of creepy doll photo’s, Aria happens upon bottle of pink hair dye with a note “You’re MY doll, bitch.” This is the first individual message any of the Liars have gotten from A since they escaped the dollhouse. Aria flashes back to the dollhouse, where A forces her to either dye her hair pink or go bald. I take my statement from earlier, the show has provided the viewers with the answer of one very important question: The mystery of Aria’s short pink hair.

Caleb spends the night at Hanna’s, but  he ends up sitting in a rocking chair the entire night observing the ineptitude of the Rosewood PD, instead of snuggling with Hanna. Caleb also placed a tracker in Hanna’s shoe, and Hanna flips a shit when she finds out. While it is understandable that Caleb is worried, it is also understandable that Hanna, after being held captive for a month, also needs breathing room. This is true for all of the girls. But what Hanna needs is space… from Caleb.

Quote of the week:

Ezra: She reeks of weed, but she makes really good pastries.

1) Was there a time line error? Charles was sent away when Jason was 1 years old. But in the home video Ali was alive. Does that mean that Jason and Ali are a year apart? I thought Jason and Melissa were the same age, and Melissa is WAY older than Spencer.

2) What is going on with the IRS investigation? Will we ever find out how A got all this free cash for stalking?