Playdead Offers a Harrowing Look ‘Inside’ a Parent’s Anxiety

Because of the nature of Inside and it being a mostly narrative experience, expect some major spoilers in this discussion. If you haven’t played Inside, I urge you to do so. It’s amazing. But this isn’t a review. Go read one of the dozens of positive reviews for yourself and play it for the next four hours. I’ll be here waiting when you get back so we can get all kinds of personal.

There’s this obnoxious thing that parents sometimes do, especially when they’re new, where they look down upon the childless and smugly say, “Well, you’d understand if you had children.” As the mother of a rambunctious five-year-old, I hate those people. Except…when I unwittingly am one of those people. Like right now.

You see, as self-centered as it sounds, when you birth a watermelon, your life does change. Not just the lack of sleep and the over consumption of chicken nuggets, but your perspective of the world alters. It’s not some existential moment where the sky parts and unicorns bless you and the spawn you’ve created. It’s much, much smaller than that. As the proud owner of a tiny terrorist who controls everything you do, you begin to see that child in the media you consume. Those over-the-top sitcom jokes about baby vomit and toddlers repeating every word become relevant because shit, that happened to me in Target last Thursday. And again on Sunday.

And when you watch a child on screen in danger, the fear is much more palpable because that damning “what if” takes a hold of your brain and doesn’t let go for the next 100 years, driving you mad when you should instead be sleeping.

That’s what happened to me when I played through Inside, the latest puzzle game from Playdead (developers of Limbo). Because I assume you read my spoiler warning, I’ll tell you the premise of Inside quickly: you control a young boy, escaping the clutches of a post-apocalyptic society hell bent on mind controlling the human race. There’s no dialogue. The boy himself doesn’t have a name. Hell, he doesn’t even have a face. He’s just a young boy, dark hair, afraid, and running for his life at every turn.

And damn if I didn’t just insert my heart into that game, imagining the boy as my son fleeing torture, dog attacks, and tasers, as I fumbled through each puzzle, eager to get him to safety. Every time the boy’s neck snapped because of some gaming incompetence on my part (of which there are many), I felt more of that parental failure heaping itself onto my shoulders. I was the reason this boy was continuously torn asunder and dammit, Jen, get it together.

While I was having an existential breakdown, my ACTUAL son was safe and sound asleep in his tent fort under his bed, surrounded by Star Wars toys and week-old snacks. But the further I progressed in the game, the more I was attached to this child, adamant on keeping him safe. I won’t deny that it didn’t do a number on my anxiety. I stopped at least a dozen times, tired of watching my idiocy kill this boy over and over because I couldn’t outswim that chick from The Ring. With a heavy heart and still confused out of my mind, I’d close out the game on the Xbox, intent in finally finishing Halo 5: Guardians or sinking another few hours into Rocket League. But as soon as I hit “quit” on the screen, I’d immediately boot the game back up because not knowing the resolution to this boy’s narrative, to this boy who had now become a metaphor for my son, was driving me insane. 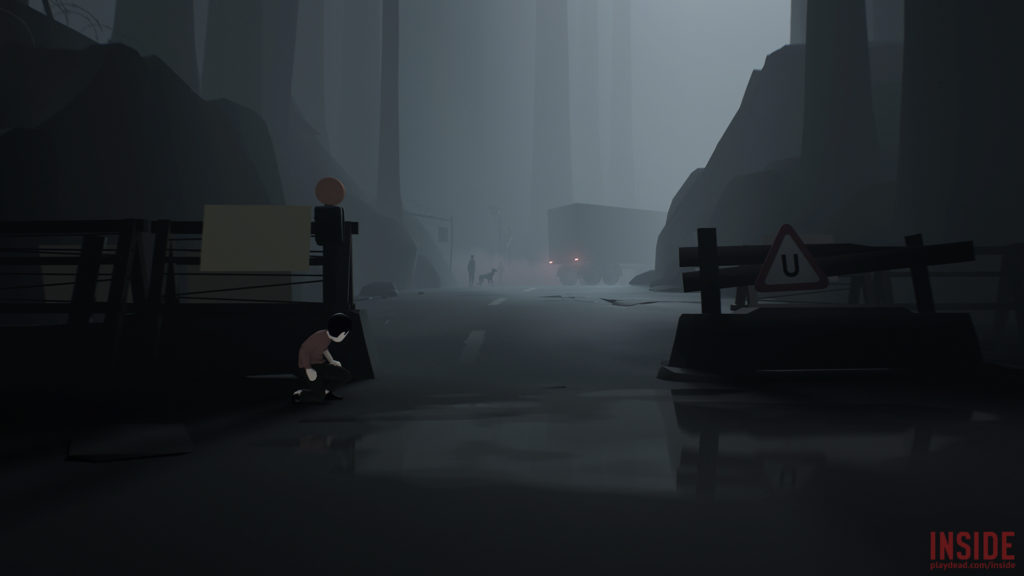 At one point in the story, there’s a moment where the boy witnesses a cage of human drones whisked away via forklift. It’s not a godlike entity or an alien race who orders them to be shipped away, but a man, accompanied by a young boy, presumably his own son. This was a frightening moment for me, not only realizing that humans seemingly in control of their own faculties ordered the demise of their own kind, but that there was a child there learning the trade of selling humans. To these characters, the experimentation on others was ingrained, accepted from childhood. And my god if that isn’t a terrifying commentary on our world at large and the future for kids like my son, I don’t know what is.

There’s a prevailing theory about Inside that you, as the player, are the one controlling the boy which then allows him to Inception-esque control other mindless drones. It’s a fourth-wall breaking theory, one that only comes to light once you’ve destroyed all of the game’s power orbs and completed the secret ending, thereby pulling the power on the device that allows you to control the boy. (And also resetting the game itself.)

The thing that’s so interesting about Inside is that you can interpret the secret ending a thousand different ways and because of the open-ended nature of the game, no one knows which is “right.” For me, personally, seeing myself as the mother of this child, the secret ending played out like a warning: if you control everything he does, force him to be perfect, you’ll lose him and never get him back.

Things may start over but they’ll never be the same.

If it sounds like I’m overreacting to “just a video game”, maybe I am. Maybe that parental anxiety that’s been heaped onto an already neurotic person makes me more likely to overanalyze the media I consume. But the fact of the matter is, Inside is a game so good at what it does that it elicited those worried feelings from me. When the boy was afraid, I wanted to comfort him, I wanted to wrap him in a bubble, hide him from the dead farm animals and men who wanted to hurt him. But I couldn’t. I couldn’t stop time and going back was fruitless. The only thing I could do was continue pushing him forward into this daunting world, whether he wanted to or not, and hope to God that the ending was better than the beginning.

Despite my anxious emotions guiding me through the plot, Inside is actually a good game with solid puzzles and a gorgeous world that doesn’t slam you over the head with its message. If there is even a unified message you can discern from its narrative. I highly recommend it and I’ll support others who want to enjoy its story, but given my emotional state, I’ll only play through it the once, thankyouverymuch.

I don’t know if my heart could take a second time.

Inside was played on the Xbox One and is also available on PC.