‘Pikuniku’ Review: Hard To Be Evil When We Look This Cute

Pikuniku is a hilarious puzzle platformer that asks players, “Should I kick this?” And the answer is always yes.

Charming design, clever dialogue, and general aloofness set Pikuniku apart from other puzzle-platformer video games. Developed by SectorDub and published by Devolver Digital, Pikuniku is a colorful, straight-forward game that never takes itself too seriously. As Piku, the red oval with legs hero of the story, it is up to you, to save the world from the evil Mr. Sunshine and his corn stealing ways.

Simplicity is the star of Pikuniku and I mean that in every sense of the word. Geometric characters are sprinkled throughout a 2D world colored with a bright, bold palette found only in a kindergartener’s crayon box. The music, punctuated by single notes, is charming in its playfulness, reminiscent of MIDI music from games three decades its senior. The controls are just as basic, adding: a flimsy kick that you’ll use often to solve puzzles and irritate neighbors, an ability to roll into an oval for faster speeds, or a graceful swing from hooks with Piku’s ever-so-nimble legs. Boss battles are easy affairs, brought down only by trying to navigate the imprecise nature of Piku’s movement. (No, I meant to kick his feeble leg the other direction!) Because of Pikuniku’s clean design, I didn’t come across any game-breaking bugs or graphical hitches on either the PC or the Switch.

In fact, Pikuniku’s strength comes from simply being present in this ridiculous world. Despite all the platformer elements, Pikuniku is much more of an adventure game that relies on the player being nosey. Comedic dialogue carries the story and without it, Pikuniku would have been a much more tedious experience. Instead, Pikuniku expects its players to be trolls, kicking everything in sight — from an entire pottery store, to skulls, even to baby bird eggs — and it rewards this absurd behavior with trophies. I regret that Pikuniku didn’t lean into this mechanic more heavily, letting Piku be more of a menace than a robot kicking hero. I found myself wanting more of these small world-building additions but unfortunately, once the story kicked into high gear with boss battles, it lost much of the nonsensical nuance.

While Pikuniku wants you to explore the world at large and enjoy all that it has to offer, earning trophies for completing side quests along the way, the reality is: there isn’t much to do outside of the linear main questline. The linear story, coupled with the relatively short gameplay, does Pikuniku a disservice. What’s there is fun and engaging, leaning into the ridiculous physics of Piku and his bouncy friends just enough to make traversing the world interesting and at times, hilarious. However, if the game had offered more than the three-hour playtime, more secrets to explore than three map areas, and fleshed out other uses for currency and gear, it would have been a richer gaming experience.

To increase some of the time playing Pikuniku, the game adds 9 co-op levels for two players to solve puzzles with Piku and Niku respectively. While the co-op is challenging and fun, it suffers from the same issue as the solo campaign: I wanted more. 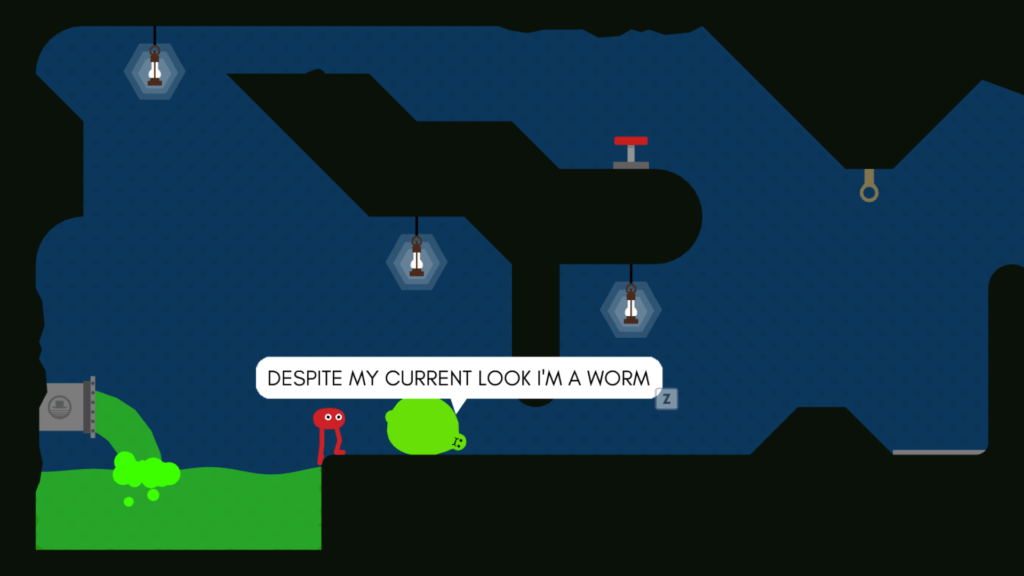 The most disappointing aspect of Pikuniku might be the “could have been.” When I demoed the beta version of Pikuniku back in 2017, the game felt more like what was promised in the trailers: political intrigue and covert operations wrapped in a playful bow of circles and cloud-shapes. Beating robots required feeding them paradoxes with dialogue choices. Mr. Sunshine was a more prevalent character in the town as opposed to the evil, unseen entity he’s become in the finished product. You weren’t sure which of the townsfolk you could trust and that made the colorful design all the more interesting because the cheery geometric shapes belied a darkness of distrust. As it is now, Pikuniku isn’t a bad game, not by any means, but I’m left with a hollow feeling wishing I had never played a game that didn’t pan out and might not ever be.

All in all, Pikuniku is a simple, entertaining game that left me wanting more. Had it been a mobile title, we might be praising the game’s mechanics and ingenuity and instead, I’m yearning for an update. As a game that launched on the Nintendo Switch and PC, it’s a fun time-waster that offers three hours of entertainment and a lot of laughs, which I would say is worth the $13 price tag, but I can’t imagine that either the solo story or the co-op levels offer much in the way of replay value. While I enjoyed the experience, I’ll just be over here hoping that SectorDub and Devolver offer gamers a bit more in the Pikuniku universe.

Previous article
Pinball Week, Day 4: The World of Virtual Pinball
Next article
After The Credits Episode 4.29: Frozen P’s and Q’s