Divinity 2 takes places centuries after the original, in a time where magic and Sorcerers are persecuted and imprisoned. As the party of four protagonists, it’s up to you to fix this horrible injustice in the world. Or don’t. Whatever. I’m not the boss of you.

Many previews on Divinity 2 already cover the obviously cool and new aspects of Divinity 2 – the multiplayer arena, the new characters, and the improved storytelling. Those are accepted as good improvements over the predecessor and genuinely good additions that enhance the world as a whole. The four new, preset characters, in particular, add another level of immersion to an already diverse world. But let’s talk about how Divinity 2 really shines: it’s all in how gross it is.

(Note: I’m sure the developers I demoed Divinity 2 with regret ever telling me any of this information. To those of you at Larian who had the misfortune to watch me fumble through your beautiful game: sorry, not sorry.) 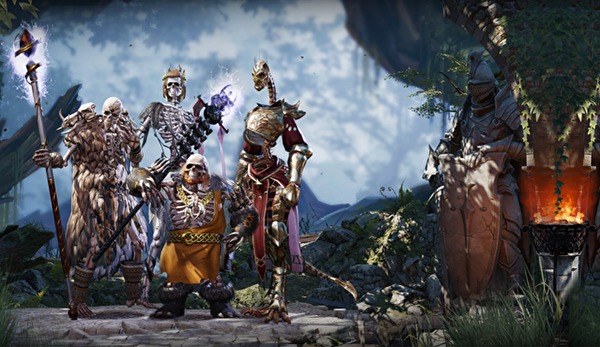 Let’s start with arguably the biggest gross addition: the new undead race. Any of the four main races can be “undead” in Divinity 2. You don’t have to settle for being a simple hooded skeleton dude with an affinity for poison (Poison heals you as an undead. Healing potions hurt). You can instead be a gross skeleton dwarf or elf or lizard or human, while also making use of the usual traits of said chosen race. Like the other races in Divinity, the undead received a set of perks, like the ability to walk through Death Fogs (and not die painfully, yay). As cool as surviving Death Fog is, the undead race can, among other things, also speak to the dead (including animals!), siphon their source for more devious magic purposes, and then make use of the Face Ripper.

Imagine you’re Arya Stark and you want to be someone else, like Littlefinger, for example. All you would have to do in Divinity is kill your enemy, drain his source magic, use the Face Ripper on his face, and then craft a mask using those ingredients. Put on the mask and no one knows you aren’t actually that person.

Isn’t that so horrifying it’s beautiful?

On top of being able to wear faces you didn’t grow yourself, your undead character is also able to embody the traits of the race they take on. If the undead wears an elf’s face, they would gain that elf’s skills, like the ability to use cannibalism as a detective skill.

I can’t wait to try out the new undead race. I could cause so much havoc, it would be a terrifying sight to behold.