As Chris Traeger would say, that was literally the best series finale ever.

Parks and Recreation has always been the underdog in NBC’s comedy lineup. The first season is almost universally agreed to be the weakest link in the entire series, but the show really came into its own in season two. By season seven, we’ve grown attached to these characters and look forward to their weekly adventures.

Last season’s finale jumped the plot forward to 2017. Leslie is a Midwest Regional Parks Director with three kids, Ben is still the City Manager, and the rest of the cast has split off. It comes across more as a series finale than anything else, albeit one that doesn’t let us see what happens to Tom, Ron, Donna, or Gary. In an unjust world, the elevator door would’ve closed on Parks for good, but NBC realized what a great show they had on their hands and gave it a true final season. Jumping the plot forward three years didn’t make things jarring; if anything, the first four episodes breathed new life into the show, giving it entirely new plots and taking the characters in unexpected directions. Ron forming his own company with his now revealed brothers? Totally makes sense. Andy having a TV show based on one of his many goofy personas? 100% plausible. But then it came time to say goodbye.

“One Last Ride” opens with a concerned citizen asking for a swing to be fixed, but that’s just the framing device for the series to do what it does best–letting us see its characters be themselves. This past season has featured the various odd people that make up Pawnee, Chris and Ann included (with their kids!), and the finale gave us a look into the future for the key players and the most recurring characters. It’s fitting that each of these flash-forwards began with Leslie giving a heartwarming speech to and touching the respective character. Leslie helped these people discover the best in themselves.

Some will think that these glimpses into their futures will border on cheesy at times, and admittedly they do, particularly with Ann and Leslie’s children possibly getting together, or April and Andy finally deciding to have a kid of their own (Burt Snaklehole Ludgate Karate Dracula Macklin Demon Jack-O-Lantern Dwyer, Jack for short). But each of the characters got their own cheesy ending. Donna created a “Teach Yo-Self” nonprofit organization for her husband Joe; Jean-Ralphio faked his own death so he and his sister Mona-Lisa could use the insurance money to start a casino in Tajikistan; Craig married the hairdresser, Typhoon and they grew old together (“We love each other, and the tax break is substantial”). These futures feel consistent with what we know about these people. Even Garry got a moment, albeit one where they spelled his name wrong on the tombstone.

The swing plot in the present day almost feels like an afterthought, and Leslie’s speeches aside, there’s nothing that really makes it all that memorable or relevant. Which seems like the point, since the characters are the heart of the show, and the Parks Department is secondary. Because of this, the show could have just as easily flashed forward for each of its characters and it would’ve been more satisfying. Since “Donna and Joe”, perhaps “Leslie and Ron”, the episodes after have given a true sense of closure. “One Last Ride” is just an epilogue, a definite assurance that everyone we cared about got their happy endings. It feels like things have finally come full circle with Leslie, who becomes governor of Indiana, maybe even a co-governor with Ben, or maybe more. It’s unclear, but then, it doesn’t really need to be. Whoever the Secret Service detail is referring to, they remain a team. A team that has a deep hatred of the library and a huge love for calzones. 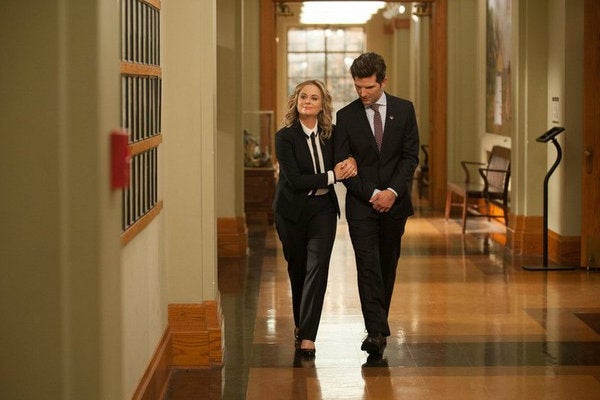 It’s fitting that the final shot of the cast of Parks and Recreation is of them hugging each other. The characters and the way their lives have all connected make them feel like a family. She was a mother before she even had her triplets in the way she cared for Tom after his real divorce with his fake wife and how she treated April. April jokingly calls her “mom” at one point, but their relationship has always felt like one between a mother and daughter. When you pair Leslie with any member of the main cast, you see that she treated each of them like they were family, like they were her children. And like any mother, she gave one important piece of advice:

“Go find your team, and get to work.”

You will be missed, Parks and Recreation. I love you and I like you. I will miss you in the saddest fashion, and you’ll always be 5,000 candles in the wind.