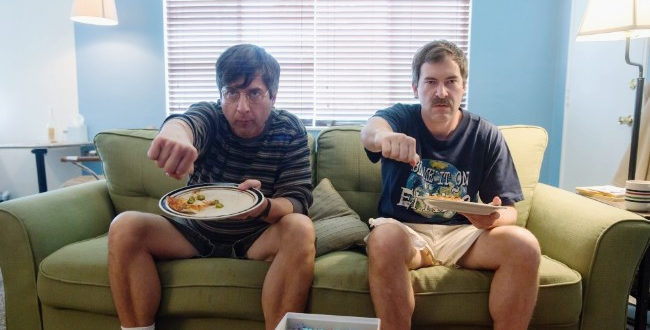 I’ve talked about mumblecore on here in the past. It’s a very particular style of filmmaking, heavily reliant on improvisation and low budget techniques – though has somewhat seen its golden age dwindle over time. Lena Dunham (Girls) and Greta Gerwig (Ladybird) are probably the biggest names to come out of the movement. As is Joe Swanberg and the Duplass Brothers, whom I am a big fan of.

I mention this because I’m a huge fan of Mark Duplass. He and director Alex Lehman, had worked together previously on their indie hit, Blue Jay which was a critical success distributed here on Netflix, after running the film circuits. Now, they have reunited here again for the film Paddleton.

Paddleton, is a mumblecore styled movie about two middle-aged loners, who live in adjacent, upstairs and downstairs, apartments. They are single best friends, who spend their weekends watching kung-fu movies, while eating some cheap homemade pizza, and playing a strange paddleball-meets-basketball like game, called Paddleton.

Mike (Mark Duplass) is suddenly surprised when he discovers he has terminal cancer, and only has a short time to live. Deciding to take matters into his own hands, he asks his best friend, Andy (Ray Romano), for help in committing legally assisted suicide: by going on a road trip to procure the end-of-life medication from a faraway pharmacy.

This forces Andy and Mike, to re-evaluate their friendship and better understand the meaningfulness of their lives and their relationship.

Again, mumblecore is less about the story and more about style. It involves a lot of bantering, which is prominently featured within this movie. More than anything else, the narrative pulls from its actors. Which is why this movie takes up most of its time with Andy and Mike, as we get to know their best friendship, and watch as a person (Romano), genuinely loves and cares about their friend, up until the end.

Obviously, the final moments of the film are where it gets most emotionally powerful, much like the film Blue Jay, which preceded this one.  So while a stellar performance was expected from Mark Duplass, as he’s shown his range within this genre, Ray Romano – whose only major dramatic performance of note was playing the father in The Big Sick, was a major surprise.

He utilizes the type of banter and humor of Romano’s own signature style. But what’s compelling about the performance, is how he maintains this façade of support – while all the while, emotionally dying on the inside, over his friend.

It’s easily the actor’s most compelling performance to date, in one of the saddest movies I’ve personally watched in a long time.

Christian Angeles likes to watch the moving pictures. He also listens to words on the page and writes in ways that make people feel things. All on a laptop. Sometimes from an app on his phone. You can follow him on Facebook or Instagram. Read his literature reviews on goodreads: https://www.goodreads.com/xnangeles. Or read his articles in NewBrunswickToday: http://newbrunswicktoday.com/author/christian-angeles
Previous Monomythic Screenwriting, Episode 7: Inspiration
Next ‘Captain Marvel’ Review: Middle Tier MCU Film Still Delights