When we left Outlander last week, things were pretty dire for Claire and Geillis. Laoghaire had accused both of being witches and given the time period, that’s no slight accusation. With Jamie off to do Colum’s bidding and babysitting Dougal, there wasn’t much help for the pair on the outside of their prison cell. (Not much help from the rats on the inside, either.)

“The Devil’s Mark” is an episode that epitomizes what I enjoy about Outlander. Was it a fantastic episode with heart-pounding moments and top-notch writing? Well, no. In fact, I have quite a few issues with the episode. HOW-TO-THE-EVER, it was concise, developed the characters well, and moved the story forward. I counted at least three moments in the episode where the writers could have stretched out the episode a wee bit more to end on a cliffhanger. Thankfully, the gods were with us and no such thing happened. 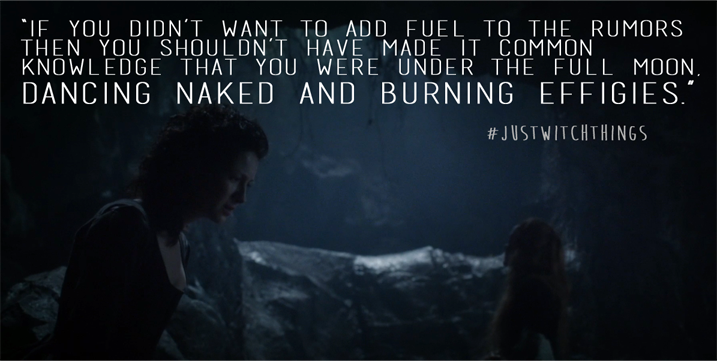 I’m always fascinated by representations of witch hunts from the 17th-18th centuries. Not because they’re insane and over-the-top (though that is enjoyable), but because of how easily our own culture falls into the same mindset. We like to think that we have grown as a people, and we have, what with all that science nonsense, but mob mentality still runs strong in our blood and the internet is total proof of that. It’s easy to look upon the people of Cranesmuir and judge them for being simple-minded and rash because we know Claire and Geillis, we know they aren’t terrible people who deserve to be burned alive. (Well, Geillis DID murder her husband, but she totally did it for love.)

The trial was nicely done, loud and chaotic, intercut with quiet, desperate scenes of Claire and Geillis in their cold, underground prison cell. It’s nice to see how different these two women are and to notice just how much Claire has grown. She trusts no one to save her except herself, which leads her to shouting back at the rabid townsfolk because like my young son, Claire knows that shouting always gets you what you want. Geillis, however, is almost serene, convinced Dougal will save the day. In the end, it is neither Claire or Dougal who comes to the rescue, but the unlikely hero in Ned Gowan.

Ned Gowan is an unassuming old man, significantly more bookish than brute. And yet, he walks into the trial with all the confidence of a–well, a Jamie–convinced he can save the girls from these false accusations. After the first witness, it’s clear how intelligent Ned Gowan truly is. He knows how to play each witness, either preying on their superstitions or their past as a means to discredit each testimony. Even with his splendid show, I was torn from the trial scenes once Claire started narrating. I don’t need to be told that Ned Gowan is a wordsmith who uses his meek persona to his advantage. That much is already made plain. The narration by Claire (and Jamie in the ninth episode) has only hindered the otherwise good show. I really wish they’d cut that out. 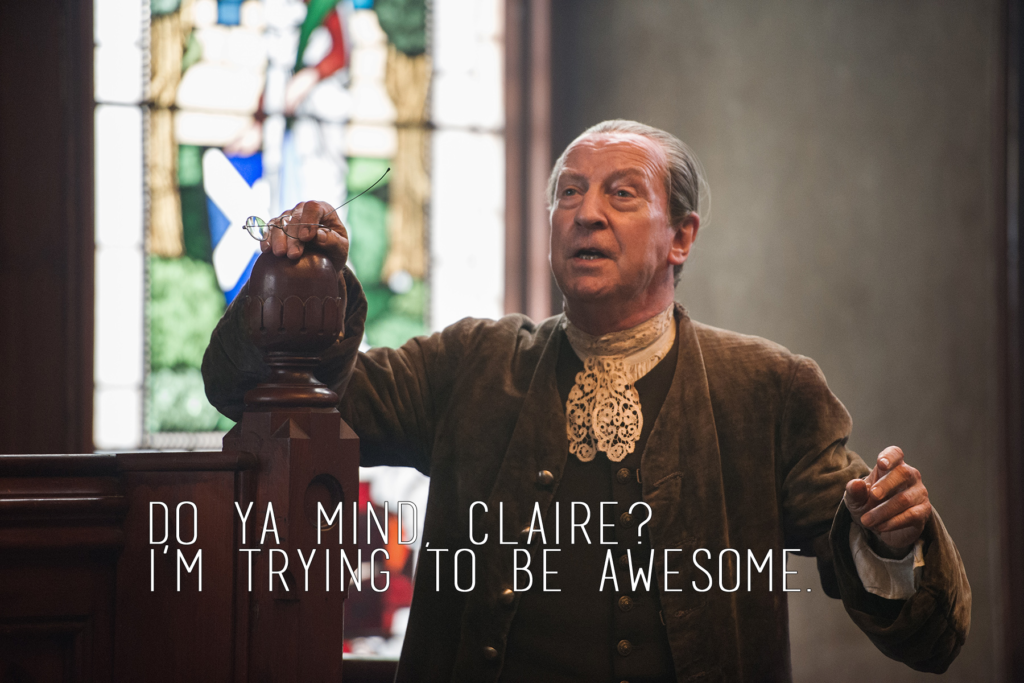 Nevertheless, Ned seems to get the job done. That is, until Father Bain takes the stand. He puts on a convincing display of a broken man, one who has lost his faith because of the selfless actions performed by Claire to save a young boy’s life. It almost seems sincere and for a moment, I thought this would be an interesting change, to see the pious man set free the accused witches. But then his purpose is made clear–he never intended to help Claire or Geillis, but to instead further the belief they are able to bewitch others, including driving a man of God away from his faith. And then the courtroom goes insane.

There’s no witty remark for Ned to make that can save the girls. Their fate is sealed unless one will admit the other is the real witch. Naturally, Ned wants to save Claire, as Geillis isn’t on many people’s Christmas card lists. Claire feigns nobility and this was one of the few moments in the show when I didn’t buy Caitriona Balfe’s acting. Claire was stilted, obviously torn between saving her own life and loyalty to her friend, but it was a flat delivery. It’s a stupid and noble act, and Claire’s not given many options, but something still felt off about it all. In the end, Claire chooses friendship and gets lashed for it. Just when things seem to hit their breaking point, Jamie bursts through the doors and somewhere in the background a trumpet plays his hero theme.

This was the worst part of the episode for me. I understand the situation Claire, Geillis, and Ned are in. I know it looks hopeless, but to have Jamie show up as the hero last minute with no explanation as to why or how he is there completely shatters all of the good things the trio did prior to his arrival. Geillis then (finally, amirite?) takes it upon herself to draw attention away from Claire so she can escape. And in doing so, she shows off her scandalous vaccination scar. Instead of Jamie rushing in to save the day, I think the scene would have played out better without the dashing hero and instead with Ned and Claire ducking out of sight. Alas, it doesn’t happen that way, and I don’t know what happened to Ned; I just know Geillis met an unfortunate fate and Jamie and Claire fled into the woods.

And that was just over half the episode.

See what I mean? There is a lot of meat to each Outlander episode, so much so that these reviews could go on for much longer. (Only I’m told to have less bodice-ripping. Silly, prude overlords.)

After saving Claire, Jamie sits down with her to calmly ask if she’s a witch, as one does. In a conversation that I assume took several hours, Claire divulges to Jamie the truth about how she came to be in 18th century Scotland. In all that time, she never manages to fix her dress and bring it up over her shoulders, but hey, if this were Game of Thrones, she’d have been fully topless, so…small miracles? (I realize the open dress was because of the wounds from her lashing, it just looked a wee bit ridiculous.)

Jamie accepts Claire’s story, admitting he doesn’t understand it (to which Claire scoffs, “Neither do I.”), but he believes she is telling the truth. They ride off into the sunset, share another female-approved sex scene, and then Jamie drops her off at Craigh na Dun.

After a lot of deliberation and a black screen that I was CERTAIN meant cliffhanger, Claire returns to Jamie and the world Jen rejoices. I can’t help but love those two crazy kids together. And now, off to Lallybroch!