There are few shows on television that cut me as deep emotionally as Outlander, so naturally, I was dreading this finale. Rarely does anyone want a show to come to an end, but this one especially so because of what we already know from season two’s first episode: the battle of Culloden happens and Claire journeys back through the stones, pregnant with Jamie’s child. Even knowing what we did, the ride was still incredibly enjoyable. Sure, some of the France stuff was hit or miss, but mostly, Outlander’s second season has been an enjoyable and emotional ride. One where the ending means the separation of one of, if not the, best couples on television.

“Dragonfly in Amber” starts in the 1960’s and I’ll say this about the episode: it jumps around the timeline quite a bit, back and forth between 1968 and 1745. I won’t do that in my recap, frankly because I found the jump between time periods rather jarring, but as I’ll discuss, I’m not sure how else sure the story could have been presented.

In 1968, Claire and daughter, Brianna Randall are in Scotland attending the funeral of Reverend Wakefield. There, they meet the incredibly sweet Roger Wakefield, and the two young ones immediately hit it off. Bree and Roger head out and explore Scotland, taking in the sights, visiting Fort William and the university at Inverness. They have a few historical conversations, talk about Bree’s parents, and even meet Geillis Duncan before she goes back in time. Geillis, Gillian in modern day, is a public speaker, advocating for a free Scotland. It’s a subject she’s clearly passionate about and even compares herself to the Bonnie Prince Charles. But Bree is much more interested in what happened between her parents, namely the rift that occurred between them in 1948. She and Roger snoop through the Reverand’s old journals and learn the truth of the matter: Claire had a three-year-long affair. 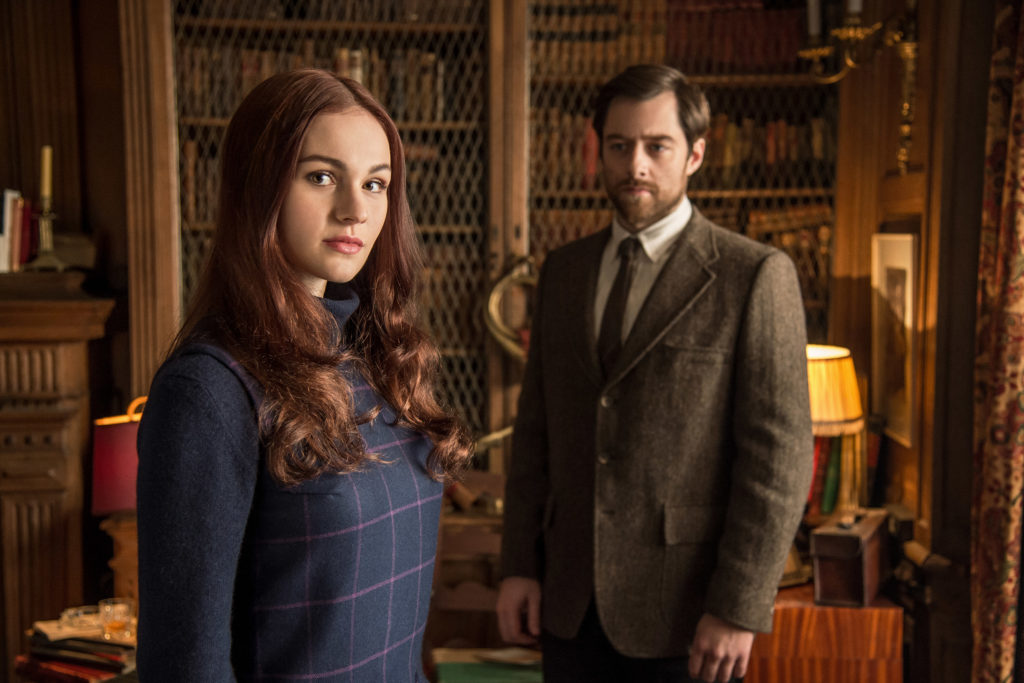 Claire, meanwhile, does her own sightseeing, but instead goes to the places that have the most meaning: Lallybroch, the Fraser headstone at Culloden Moor, and the Battle of Culloden museum. She even finds time to dig up the Deed of Sasine she witnessed Jamie sign before the battle itself. It’s an emotional time for Claire, going back over the memories, but she handles it well, even finally saying goodbye to Jamie at the Fraser headstone.

Things come to head, however, when Bree confronts Claire about the affair and wants to know the truth. Claire explains that she went back in time and fell in love with Bree’s father, Jamie. It’s here that I expected the flashbacks to occur. They didn’t, but this is where I’m going to talk about them because narratively, it makes the most sense to me.

Back in 1745, it is the morning of the Battle of Culloden and Claire and Jamie are out of options. Claire suggests they poison the Bonnie Prince Charles and Jamie is understandably aghast at the proposition. Claire, however, has run out of cares to give for the incompetent leader. Unfortunately. Dougal overhears this conversation and a fight ensues, leading to Jamie, with the help of Claire, to killing Dougal. It’s then that OF COURSE Rupert walks in, sees the deed, and Jamie realizes that no matter what he does, he’s a dead man. He signs over the Deed of Sasine (that Claire finds in 1968) to his nephew, Jamie Murray, to keep Lallybroch out of the hands of the English. Then he takes Claire to the stones to send her back to Frank, to the relative safety of the 20th century. Tearfully, Claire agrees, the couple shares one final time together, and she goes back through the stones. 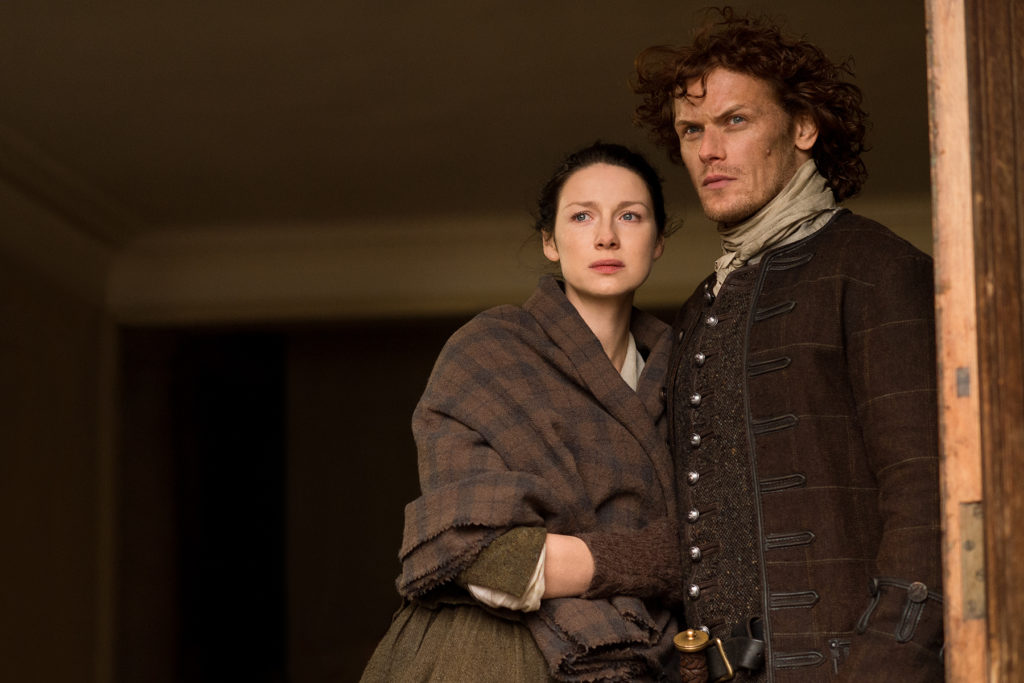 In the modern era, Bree doesn’t believe Claire’s story and thinks she’s making up the time travel to save face. However, when Claire learns that Geillis plans to travel back in time herself, Claire, Bree, and Roger head to Cragh na Dun to stop her. Or at the very least, prove Claire correct. Geillis uses dark magic and the death of her first husband to travel back to the 18th century and finally, both Bree and Roger believe Claire’s story. Roger then tells Claire that he learned through the Reverend’s letters that Jamie survived the Battle of Culloden and Claire vows to return to him.

I have so many feelings about this finale that I will try not to veer too much into rambling territory. First things first, the editing in this episode was so jarring that I think it ruined some of the emotional impact of the story. All of the moments in the 18th century were fraught with tension, emotion, and heartbreak, and they were broken up into pieces by the oftentimes silly scenes in the 20th century, with loud boisterous music to boot. The beauty in Dougal’s death and the fact that Claire physically gave Jamie the strength to carry it out, in particular, were drowned out by the quick transition to a car ride in 1968. The importance of the Deed of Sasine and the highlander’s goodbye were quick blips between the modern era’s story and it seemed a shame to zoom past them so quickly.

I loved everything in the 18th century: the Frasers outwardly claiming Fergus as their child, Murtaugh’s resolution to die beside Jamie, and ultimately, the goodbye between our lovers. And yet, I cannot help but think Outander’s finale would have been better served with just a few more minutes of highlander screen time. Of course no one wants to say goodbye to Scotland and this relationship we’ve come to adore over the past two years, but we also want to be able to relish the smaller relationships we might never see again: Rupert, Murtaugh, and especially Fergus. Even the final goodbye felt rushed, especially the discussion about Claire being pregnant, but I was okay with it, given Jamie’s own time constraint with the impending battle. The sex was rushed and will likely anger the fans of the smut, but it felt real for the moment. And of course, Jamie’s “Lord, ye gave me a rare woman, and God! I loved her well” shattered my heart into a thousand pieces.

Maybe I take that back. I was an emotional wreck after episode one, so I’m not sure I could have handled a longer goodbye between these two, even knowing they somehow find their way back to one another years later.

The moments in the 20th century were less emotional but just as important. I’ll be honest, I’m not the biggest fan of Brianna Randall and I can’t quite empathize with her hatred toward Claire, even before she finds out the truth about her father. Hopefully, season three will explore that distance between mother and daughter and how Claire, trying her best to go on without Jamie, still lived with her heart in another world.

Some of the writing in the 20th century felt stiff and too “on the nose”, even for Outlander. For instance, Brianna’s trip to Fort William, standing near the whipping post gave her chills and I think I would have preferred just a lingering stare or something less mystical than outwardly sensing her father’s pain in that place. Even Claire’s journey around Inverness felt too much like it was trying to tug on the heartstrings instead of just telling the story at hand. Caitriona Balfe is such an amazing actress, especially when it comes to facial expressions, so I wish they had relied more heavily on her talent to show Claire’s torment.

All of this being said, for all my complaints about the editing and the dialogue (especially Brianna’s), I still think that the season two finale of Outlander is gut-wrenching television. It left me an emotional wreck and I’m not entirely sure how I’ll manage to survive until next year. If the season hadn’t so masterfully enhanced this beautiful relationship, played up the struggles between Claire and Jamie so well, their goodbye and then hopeful reunion wouldn’t have been such an emotional roller coaster ride. All of the credit is due to the insane chemistry between the two leads, their gentle understanding of one another, and the ability to say so much with so little. It’s cheesy and goodness, I’m such a romantic, but I cannot help but love every scene they share.

And of course, I have to applaud the always outstanding Bear McCreary for his music, without whom certain emotional scenes would have been left dry and wanting. If not for the fabulous building score, Claire’s goodbye at the headstone would have been empty and cliche. Instead, it pulled at all the right strings and was remarkable, a perfect moment between a woman and the ghost she left behind for twenty years.

I’m sure that others will compare this finale to the Game of Thrones finale and that just isn’t fair because while Thrones builds all season to its finale, Outlander spends its entire season building relationships that tell stories. And as much as I loved Thrones, it can’t even compare to the feelings I have for Outlander and how excited I am for a third season.

Outlander will return next spring for season three and then again for season four.