Let’s discuss the first half of Outlander Season 1: Or die trying

Since I loathe spoilers, for this write-up I’ll paint the plot with broad strokes, in the hopes of enticing all you TV-obsessed maniacs to watch the show. I can’t promise some bits won’t slip through the cracks, since, well, I am discussing a show that has already aired eight episodes. To all of you perverts who’ve already watch the first half of the series, let’s have a super spoiler-y discussion in the comments. I’ll bring the snacks.

I’ll just throw this out there since I don’t like lying to you, internet: I’m new to the Outlander series. An outlander, in my own right, if you will. (Sorry, not sorry.) When Starz announced the show and I read the synopsis, I wasn’t impressed–which is odd, given my love of historical dramas, Scotland, and bodice-ripping red heads. Something about the time-traveling romance screamed “choking hazard: too much pulp” for my tastes, so I steered clear like the good little trend-chaser I am. It wasn’t until the first preview trailer that I became more interested. (Okay, okay, it was the male lead and promises of sex. I’m not a complicated woman, I know.) I sped through the first book and found myself on the other side–a fan, and a little bit too warm for polite company. Because I finished the book before the first episode aired, I consider myself an Outlander hipster and thus, am able to properly critique the first eight episodes of the series. Step off, plebes. 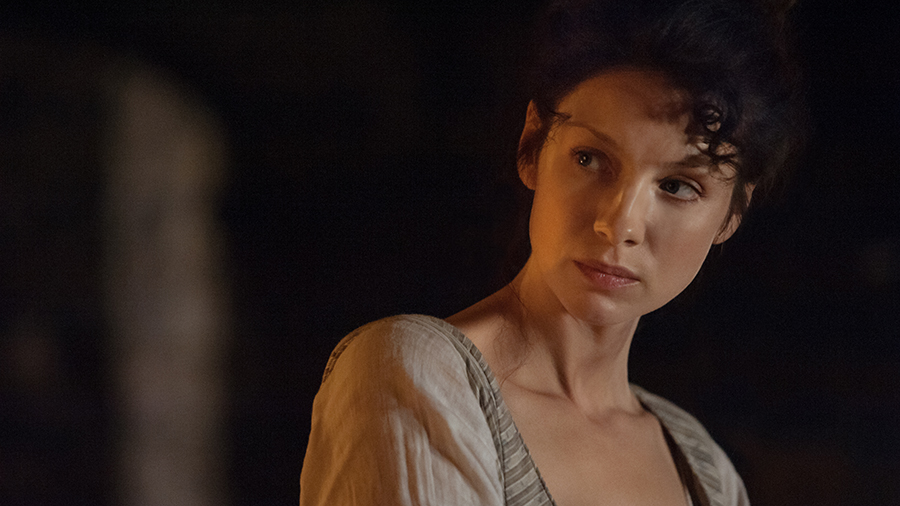 Outlander is the first of a series of books by Diana Galbadon that follows Claire Randall, a strong-willed nurse who travels to Scotland with her husband, Frank, for their second honeymoon. After five years spent apart due to World War II, the couple seeks to rekindle their relationship through lots and lots of sex in poorly put together Scottish beds, bringing joy to sweet, but nosy, old women everywhere. Unfortunately, during their plight to have sex on every flat surface in the Highlands things go awry when Claire touches the stones at Craigh na Dun and is vaulted back in time to the 18th century. Caught amid the Jacobite uprisings, Claire is forced to navigate political intrigue between the Scottish McKenzie clan and the English redcoats, in an attempt to prove to both sides she is not the spy they claim. Along the way, a romantic, ahem, entanglement occurs and I need a fan just thinking about it.

For as much as I’ve enjoyed Outlander so far, the promotional work for it has been downright terrible. From the episode trailers to the posters, the show comes across as a cheesy romance that just needed an excuse to have men in kilts. (“The Wedding” episode trailer is the finest example of this.) Don’t watch Outlander’s opening credits, either. I have no idea what Starz was going for when they made that nonsense. Unless they intended to lull their viewers to sleep, in which case: gold star. 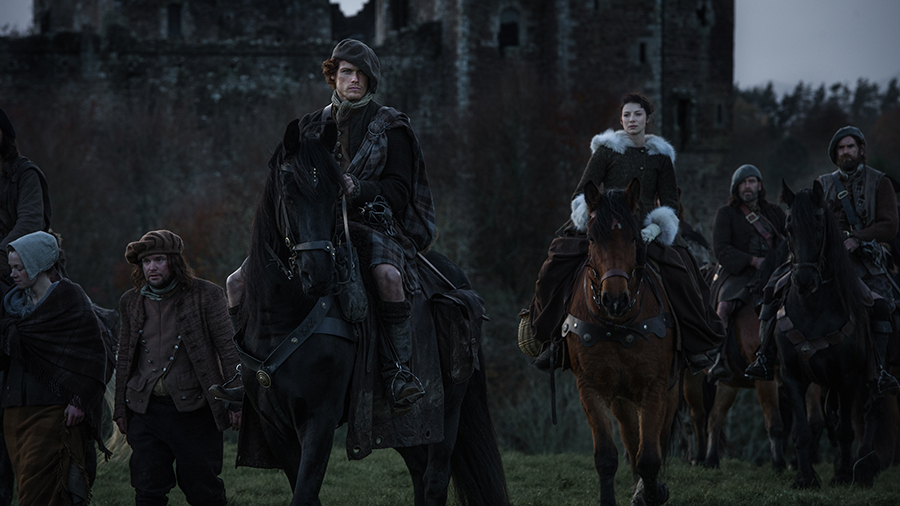 However, once you fast forward through the credits, you’ll see that Outlander is much more than the 18th century version of Fifty Shades of Grey. Claire, played by the wonderful Caitriona Balfe, proves to be an exhilarating protagonist whose resourceful yet stubborn nature brings out the best (or worst) in the surrounding characters. Watching a modern woman explore the past (to which she already knows the ending) is an interesting premise. The show is at its most interesting when Claire is tossed headfirst into unfamiliar customs. The men of the McKenzie clan are a fascinating bunch, and they begrudgingly come to accept the foreigner’s presence, not because she is attractive (or because they–sigh–want to rape her), but because she can handle herself in a pinch, mend a dislocated shoulder, and use all the best modern-day insults in a single breath. Even Jamie (Sam Heughan), her male counterpart, only comes into his own while in Claire’s company.

I don’t have a complaints about any of the actors, though, I do pity Tobias Menzies. Every time I see his face I’m reminded that he played Edmure Tully in Game of Thrones and I kind of want to sucker punch him in the mouth. But kudos to him for being able to act as both the endearing Frank and Frank’s English ancestor, Captain “Black Jack” Randall. Menzies capably expresses the quiet villainy of Black Jack without taking the character to Petyr Baelish levels of madness. But! The show is still young and his barbaric behavior can only go up (down?) from here. 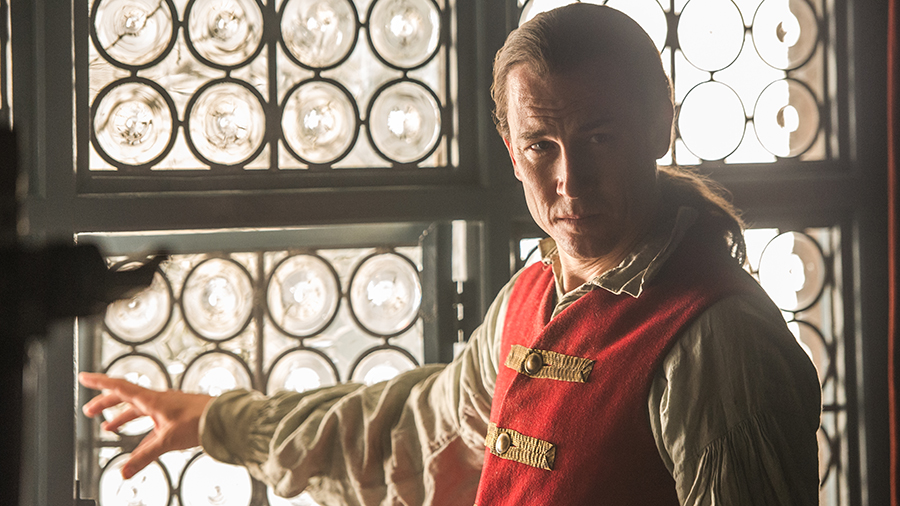 I won’t lie to you, internet. Outlander isn’t perfect. The plot meanders at its own pace and if you’re expecting Game of Thrones-intrigue or Spartacus-action, you’re gonna have a bad time. For me, the characters make the slow journey enjoyable, allowing me to savor the differences between eras, as well as the varying cultures, and–I’ll say it–the accents. However, I could do with about, oh, 90% less voice-over work. Nothing pulls a viewer out of a story more than having a narrator explain the story. I appreciate the attempt to insert the first person POV from the books, but we aren’t stupid. Yes, honey, Claire, we all figured out half an hour ago that you are no longer in the 20th century. Do try to keep up. And if another episode ends with Claire saying some variation of, “Somehow, I had to find a way back to Craigh na Dun….or die trying” I’m going to eat my hair.

The biggest problem with Outlander is what is happening to it at this very moment: nothing. Absolutely nothing. Outlander is taking one them fancy-smancy mid-season breaks all the cool shows are doing these days and I couldn’t be angrier.

APRIL? Are you kidding, Starz? Do you know what comes on in April? GAME OF THRONES. Do you know the kind of people watch shows like Outlander? PEOPLE WHO WATCH GAME OF THRONES. If people are already being sated with Game of Thrones, guess what they aren’t doing? LOOKING FOR A SHOW TO FILL THEIR BLOODY GAME OF THRONES HEARTS. Do you see where I’m going with this? Ya had your window with the fall showing and you. just. blew. it. But hey, I’m easy to please. Lure me in with more promises of bodice-ripping and I’ll keep watching.

Tell me your thoughts about the show so far in the comments. Frustrated rants, swooning, and inappropriate gifs are all welcome.

Outlander was airing on Starz on Saturdays at 9pm. Now it isn’t.
It will return April 4th, 2015.
Images courtesy of Starz.com