‘Outlander’ Not Shying Away From PTSD in Season 2, “Not in Scotland Anymore”

Spoilers through season 2, episode 2: “Not in Scotland Anymore”

I wrote a lot last season about the ending of Outlander and how important it was for us, as viewers, to see the pain Jamie went through. I was worried, given the tone of this season that the writers might brush off what Jamie’s endured and instead jump back into the smut, but thank goodness Starz believes in its characters and is letting broken Jamie put his heart and soul on display. It’s an important depiction of a man so admired for his strength to show that he was raped and that he does suffer, not because I’m a sadist, but because it is something that happens to men, something we as people should have to face.

It’s this darkness we’re confronted with from the beginning of the second episode, “Not in Scotland Anymore” when we see what appears to be a sweet, intimate moment with the Frasers that quickly turns into a sour nightmare of Black Jack Randall. Jamie’s in a painful position in France. During the day he’s playing a game of intrigue, trying to stop the Scottish rebellion that would lead to his death and at night, he’s reliving the torture and rape at the hands of Black Jack, wishing for the release of death. It’s enough to drive any man mad, even our sweet and lovable Jamie Fraser.

Claire is empathetic toward his pain and so she heads into town to meet one of many new characters we’re treated to this episode, Master Raymond, an apothecary who definitely has at least 37 secrets up his sleeve. Claire immediately puts him on the back heel, as she does with everyone she meets, and Master Raymond, learning of her spat with St. Germain, befriends her and offers some herbs to help Jamie sleep through the nightmares. Theirs is an interesting relationship but not one I fully trust. Master Raymond is much more than just a man selling fake crocodile blood to French nobility. 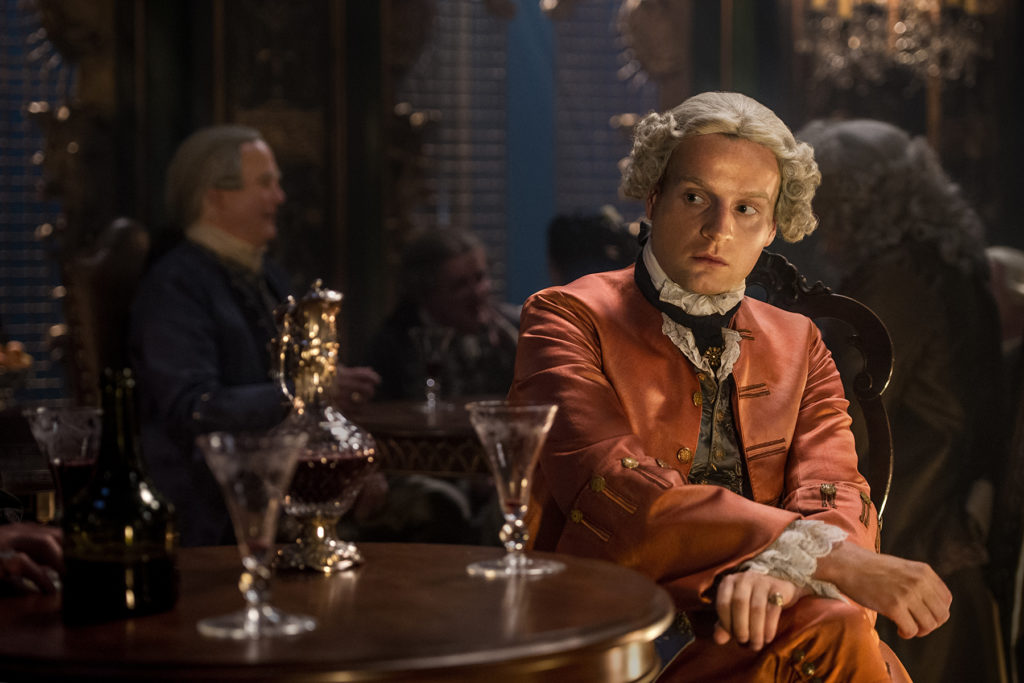 Another new guest for the week is the Bonnie Prince Charles himself, a weasel of a man who meets Jamie for the first time in a brothel. It’s obvious Jamie is uncomfortable in such an establishment but he never lets the prince see his hesitation. Jamie is quite the opposite of Claire in these situations. Where Claire has no issue with speaking her mind, Jamie is tactful, flattering, and downright charming. Sure, when the prince asks the state of the clans in Scotland, he’s honest in saying they’re rife with in-fighting, but he quickly amends the situation with the help of Murtagh’s candor. The prince is a spoiled brat and everyone can see it, but no one, even Jamie, seems intent on trying to change that fact. It’s frustrating watching Jamie kiss ass like he does, but there’s a purpose. I hope. Eventually, the prince tells Jamie that he is in need of funds for the war and he sends Jamie to make acquaintance with Joseph Duvernay, the man in charge of Louis XV’s purse.

Claire is also off making new friends in high places in both Louise de Rohan and Mary Hawkins. Louise is this season’s Geillis Duncan, loud and unafraid to speak her mind, no matter who it offends. When Claire meets with her she’s in the middle of getting all of her lower extremities waxed and Claire, desperate for Jamie’s touch, gives the hairless look a whirl. It’s a cute scene when Claire shows off her “bare honeypot” and it’s another reminder that even though he’s super masculine on the outside, Jamie is still very naive to the world of women. They try for a while to be intimate but Jamie still isn’t ready and Claire respects his wishes.

I know I touched on it before but I really appreciate that Outlander is taking their time with showing the struggling intimacy between these two. We know Claire and Jamie love one another but in the real world, it’s not all lust and stolen glances. There is pain and suffering and sometimes one partner has to be understanding of what the other is going through. I don’t want to see Jamie immediately jump back into bed with Claire (okay, I mean, the smutty part of me does) because it wouldn’t be realistic. This is a couple who has gone through actual hell and back so it’s silly for us to think they’d be the same people they were when first married. That doesn’t mean their bond isn’t still as strong, it means they’re figuring out their places in the world. Claire is still struggling with living 200 years in the past and Jamie is dealing with not only the lifestyle change in France but also his own inner demons.

The Frasers share another adorable moment when Claire comes downstairs dressed for their night at the French court in that red dress. You know the one I mean, the one with the…Uh huh. It’s GORGEOUS and believe me, if I afford such a dress, you bet your ass I’d be wearing it around the house for no other reason than I could. Claire leaves both Murtagh and Jamie speechless at her appearance and then Jamie, quickly showing his age and era, tells her he can see every inch of her, right down to her navel. Claire smiles and tells him coyly that she designed the dress herself so he can kiss her bloody ass because she looks fabulous. Jamie, despite his attempt to be controlling, can only smile at the fierce woman he loves. 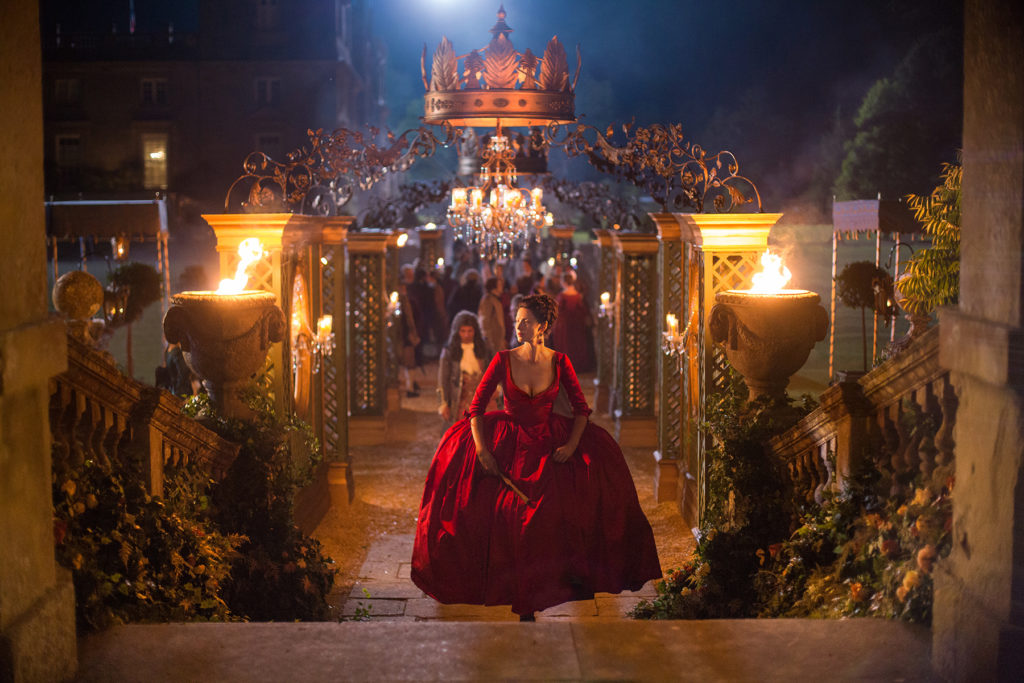 At the French court we’re introduced to the king, Louis XV, who is having trouble using the restroom with an audience. I mean, really, it was like female dormitory up in there with all the nobles gawking at him, trying to ascertain if he was or was not going to poop. He’s exactly how you imagine the king of France to be and Jamie is exceedingly charming given the situation. We also meet an old flame of Jamie’s, Annalise de Marillac, and the aforementioned treasurer (who is a bit of a hound), Duvernay.

But the most important new guest of the night was that of Alex Randall, a meek secretary who has an eye for Mary Hawkins. He’s serving under the duplicitous Duke of Sandringham who, I must say, is played beautifully by Simon Callow. The man can change his tone on a dime, perfectly befitting his manipulative character. But Randall gives Claire a bit of shocking news, that Black Jack wasn’t killed at Wentworth, only injured, and the Duke is positively gleeful at her horror. Now she is in the awful position of telling Jamie the news that his rapist is still alive and will likely head for France sometime in the near future.

Moving at a breakneck pace, the second episode of season 2 didn’t disappoint, especially with all this new intrigue and characters to distrust. Even though we know that at some point Claire journeys back through the stones and that she and Jamie fail to stop the rebellion, there’s still tension for what happens in the 18th century. I don’t quite understand why Jamie just can’t kill the prince, but for now, I’ll accept that the prince just has to survive. We don’t know what all they are able to change, if anything, but the journey certainly is stunning. I’m enjoying these France episodes if for no other reason than the costumes and the language. I love that characters have entire conversations in French, as it definitely adds to the atmosphere much better than say, casting more British actors and pretending they’re French.

Claire, Jamie, and Murtagh are all struggling with the changes in their own ways and it’s fascinating to watch how they cope but also how loyal the trio is to one another. There’s a trust between them not based on a love triangle and I’m so glad to see that represented on TV.

@theworkprint
Follow
Previous article‘The 100’: An Ode to Raven and Lindsey Morgan
Next articleIt’s a TRAVESTY if ‘Supergirl’ isn’t Renewed for Season 2