On Disney’s ‘Hawkeye’ and ‘Lucky Delivers’

We Breakdown What We Can About Clint Barton, Kate Bishop, and The Dog That Took The Internet By Pizza

Three episodes in on Marvel’s Hawkeye Disney+ series and thus far reception has been positive. The show, starring Hailee Steinfeld and Jeremy Renner, is a street-level beat-em-up Christmas special! Serving both as an origin story for the new Hawkeye in archer Kate Bishop, as well as a ‘Clint just wants to be home for Christmas’ tale.

We break it all down on Talkin’ Hawk on The Workprint Podcast. Available on Google and Apple Podcasts and Spotify.

The first three episodes of Hawkeye have been nothing but fantastic. With a positive RT score of 92 and a whole lot of shoutouts to cheesy holiday‌ ‌action movies (think Die Hard but with Clint Barton) there’s a lot to like about the new series.

In Hawkeye, the infectiously enthusiastic and fast-talking Kate Bishop — who has easily become my favorite new MCU hero — plays protege to the more grizzled yet family-man oriented, Clint Barton. A man mourning the loss of his best friend, Natasha Romanov. Her death is something Clint wants to put behind. Especially, as he seeks to return to his family in time for Christmas.

The show has been a fun low-key journey featuring battles set in New York city against mobsters such as the tracksuit mafia; there’s also a mysterious assassination plot tied to Kate’s family. But one of the biggest add-ons and stars of the series, featuring the bestest of boys, has been none-other-than Pizza Dog! Known in the comics as Lucky. 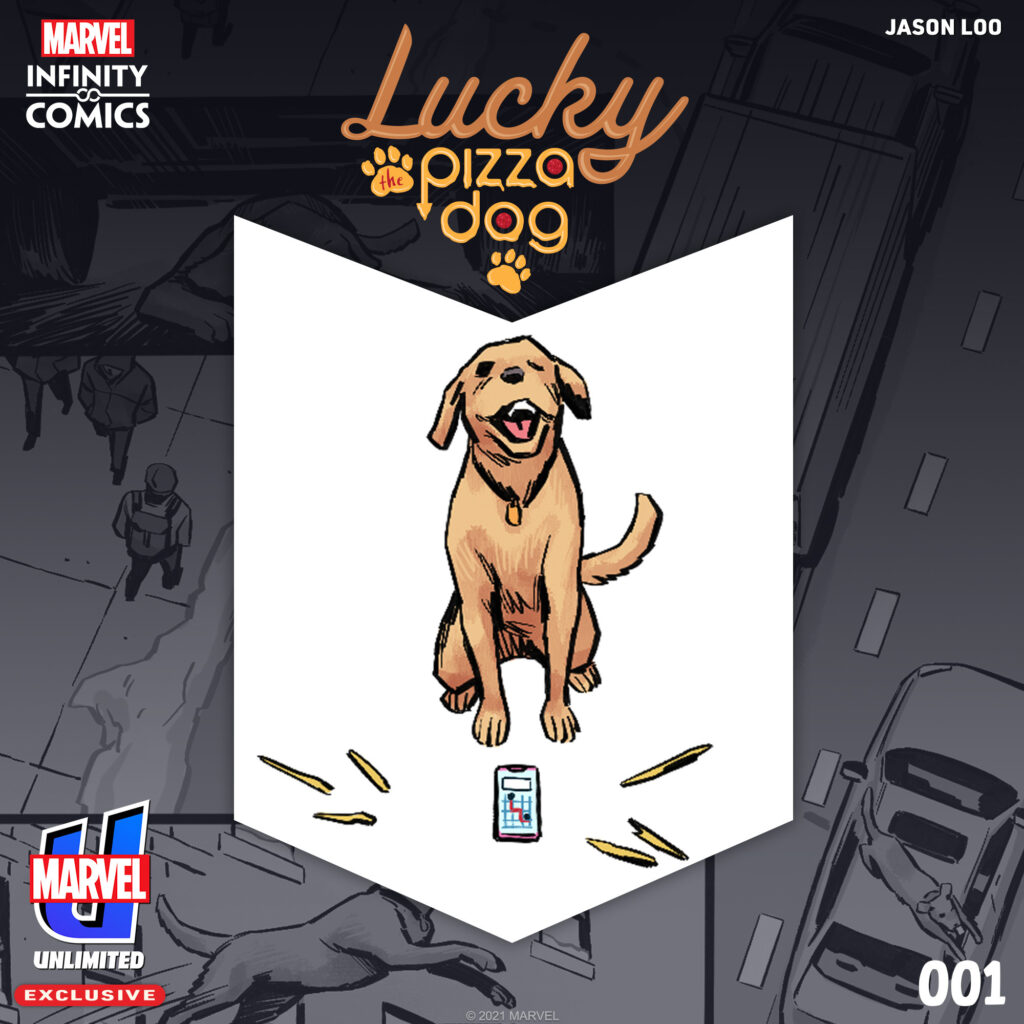 With gifs, memes, and even his own Funko Pop, Lucky, the one-eyed dog has taken the internet by storm. After a few close encounters where Kate Bishop risks her life to save the dog from the Tracksuit Mafia, we see the adorable Retriever soon travel with Kate and Clint in the Disney+ Hawkeye series and even, live in their place. Audiences quickly learn that Lucky really likes pizza, inevitably leading Kate to name him none other than, Pizza Dog!

Now, there are few things better in this world than pizza. But co-releasing a comic written and drawn by Jason Loo right on the debut of Hawkeye, comes pretty close. ‘Lucky Delivers’ is a quick one-off story that coincides with Lucky the dog’s debut. In it, we get a fun tale of Lucky investigating the case of Kate’s missing pizza. All verbal and language-free (because dogs don’t understand English silly!) and even encounter, his very own Pizza thieving supervillain!

Written and drawn by artist Jason Loo, who’d created such hits as The Pitiful Human-Lizard, this short one-off is sure to melt your hearts in the cheesiest ways and is available through the Marvel Unlimited application. And if that wasn’t enough to get your love of Hawkeye and Pizza Dog started, the actor who plays Lucky even has his own Instagram!