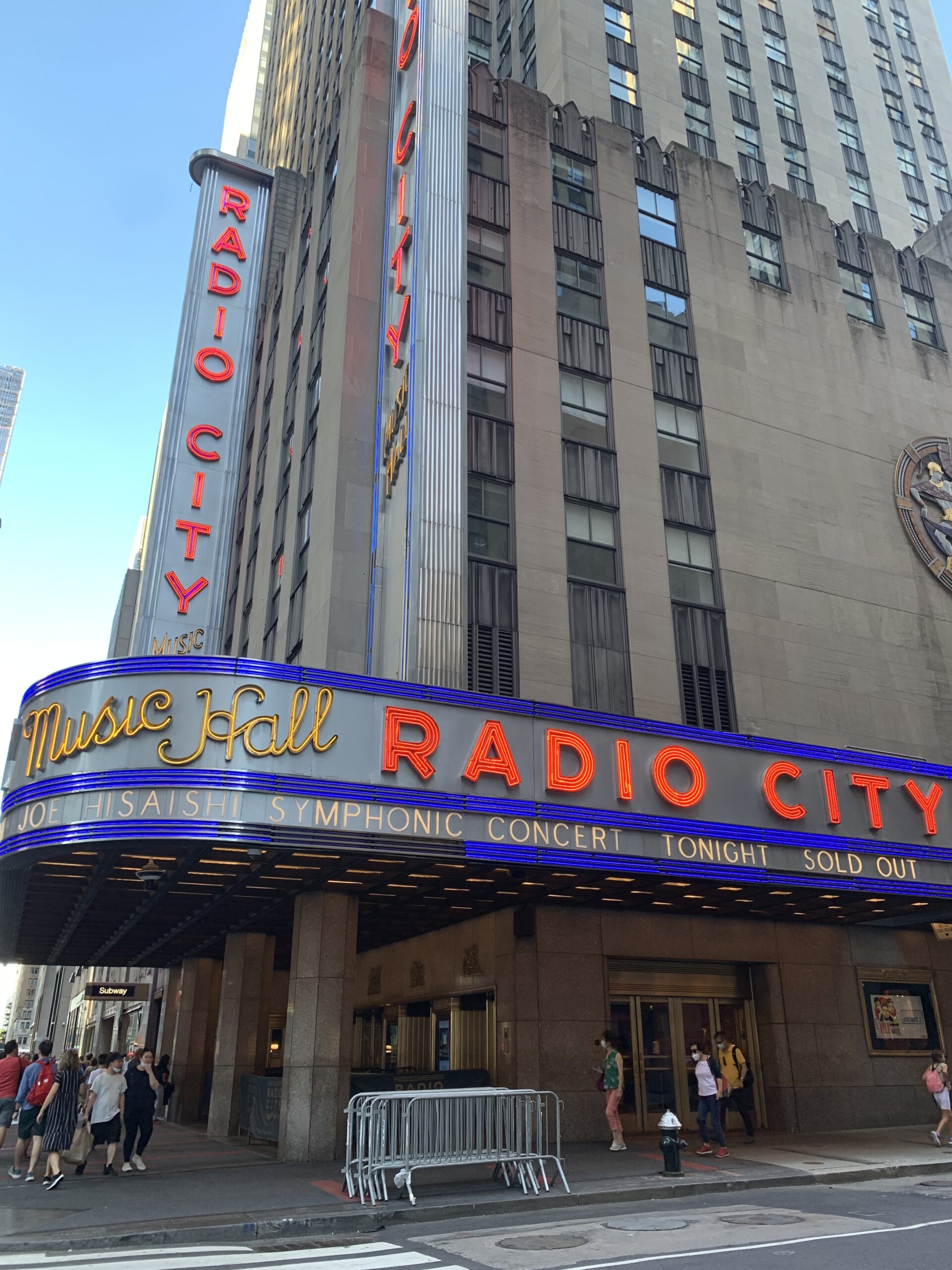 For various reasons, I missed the Miyazaki train growing up and had never seen any of the films, but knew of them by reputation. So when the choir I sing with, MasterVoices, was hired to provide the chorus for the concert, I was very excited (also, I just love cinematic music in general and am currently working my way through Miyazaki’s portfolio on HBOMax). Originally scheduled for late January, the concert series, which features music from 10 Miyazaki films, was postponed to August due to omicron. The new dates were imperiled as Hisaishi, 71, caught covid just before he was supposed to conduct the series in London earlier this month.

The music came together in three whirlwind rehearsals conducted by Hisaishi, with MasterVoices, the American Symphony Orchestra, the Brooklyn Youth Chorus, soprano Amanda Achen, and singer Mai Fujisawa (Hisaishi’s daughter). The crowd enthusiastically cheered when he told them this after her first solo.

I didn’t know what to expect from a musician of his stature, but I was surprised by his combination of efficiency and humor. One of the first things he said to the ensemble, jokingly, was that he knew we were all used to performing symphonies, and that this was only movie music, and so he hoped we wouldn’t find it too easy. 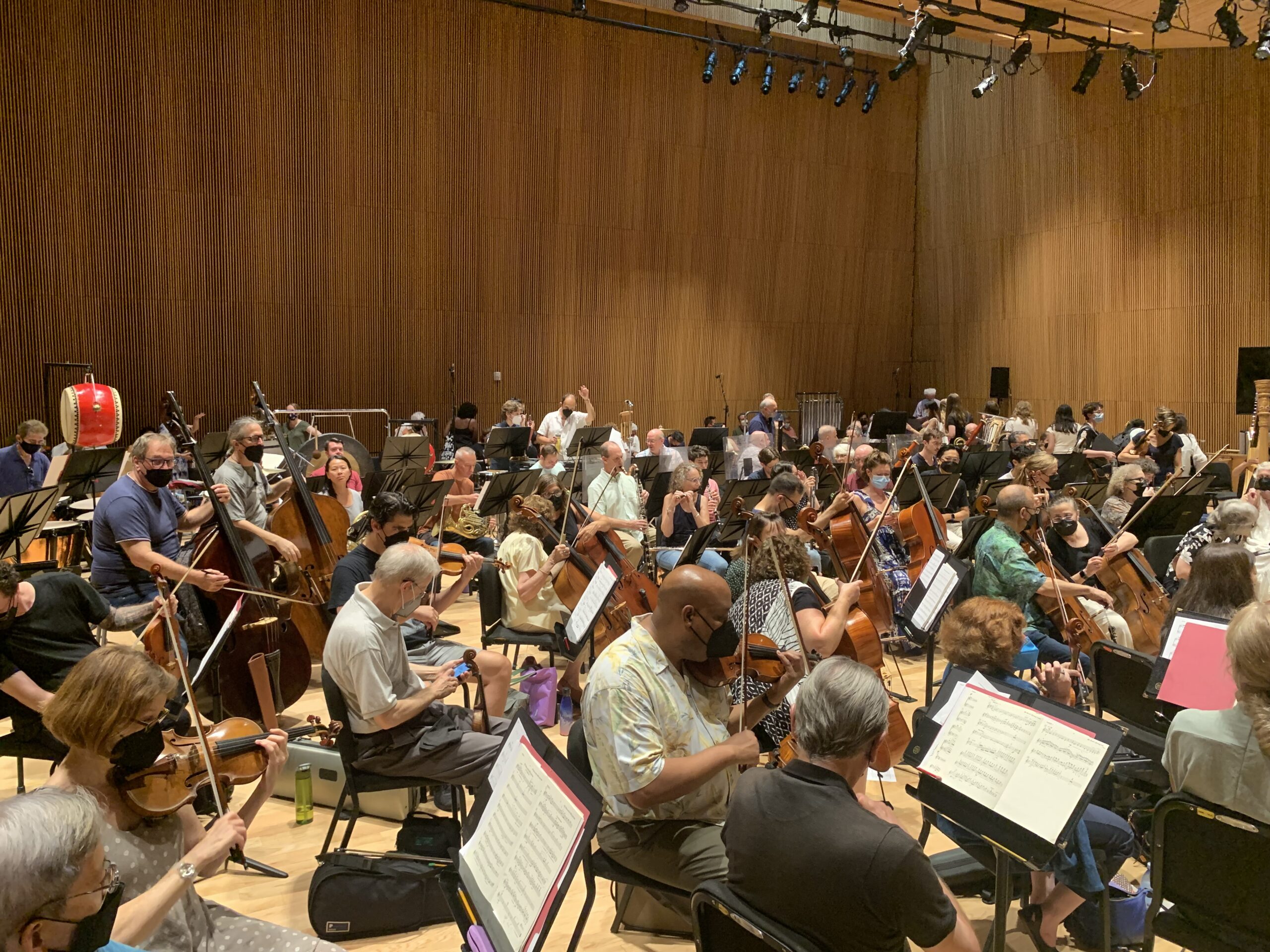 Hisaishi’s music is deceptive in its simplicity, much like the films themselves. The melody might be easy to execute, but the expressiveness required to bring it to life, evoking the characters, settings, and emotions of these beloved animated movies, was a different story.

Often the maestro asked us to try sections again not because we’d flubbed any notes, but because we weren’t giving enough to the spirit of his compositions. He was also very precise about the sound he wanted, at one point asking a percussionist to try out about half a dozen types of mallets to get the exact drum sound he envisioned. 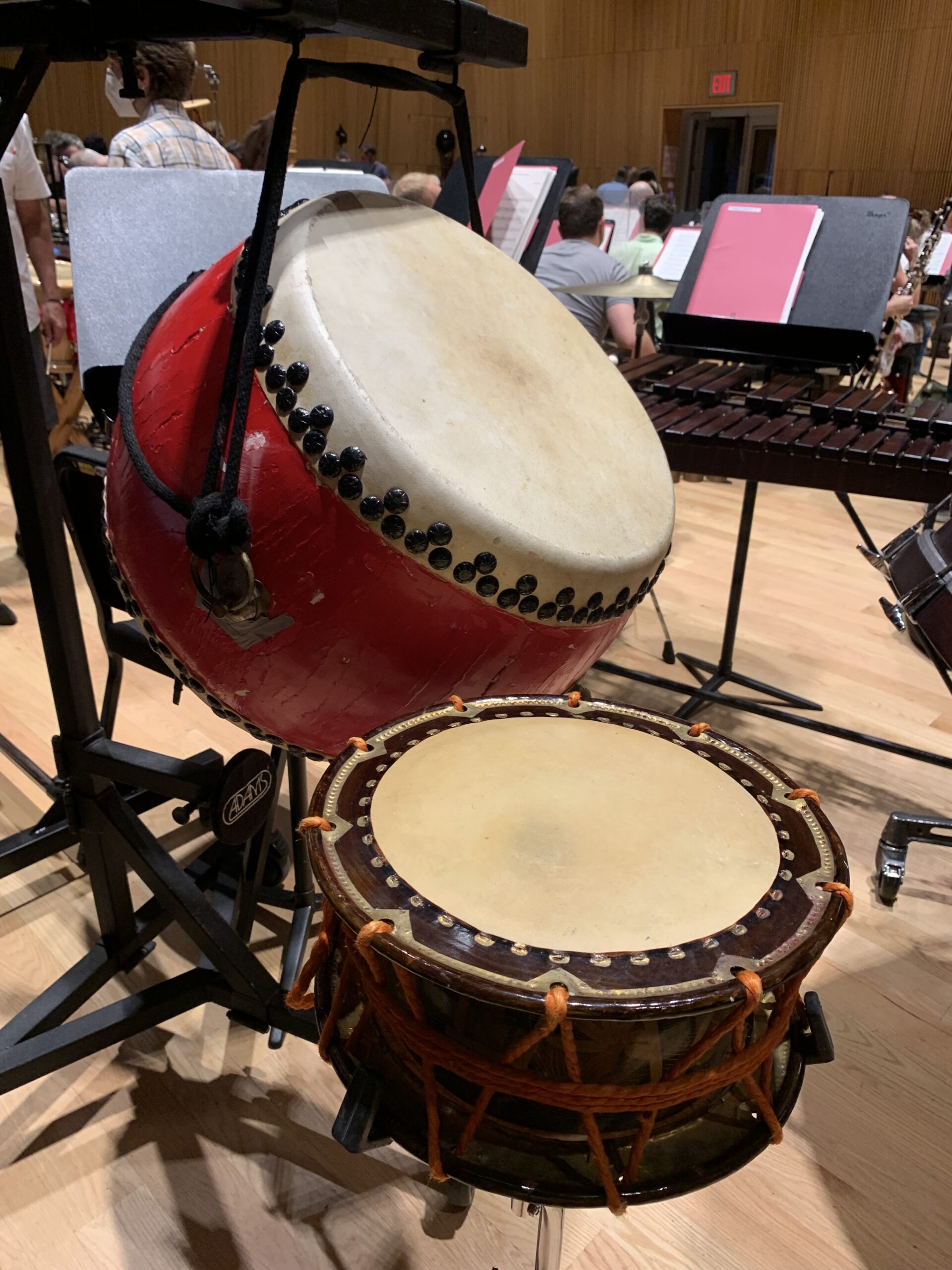 Very little of the concert music came directly from the film soundtracks. Hisaishi re-arranged his scores to be more suitable for a live concert experience. Having recently watched several of the films, I noticed that the music is a lot more understated in the movies, bucking the Hollywood tradition of using sobbing strings or heroic horns to tell the audience exactly what to feel (indeed, it’s said that some movies over-rely on their composers to add emotion to scenes that really don’t carry much).

I can see why, in bringing his music to a concert venue, Hisaishi would bulk up the orchestra parts, add a choir, and stretch out his movements to let the music luxuriate in the melodies. For instance, the “Nausicaa Requiem” from Nausicaa of the Valley of the Wind is expanded from maybe 10 seconds of instrumental music in the film to a full choral movement (set to the Latin Dies Irae text that many classical Requiem composers, including Mozart, used). And “Carrying You,” the theme song of Laputa: Castle in the Sky is transformed from a piece for a pop-style solo singer to a sweeping piece for children’s and adult chorus that would feel at home in an opera. 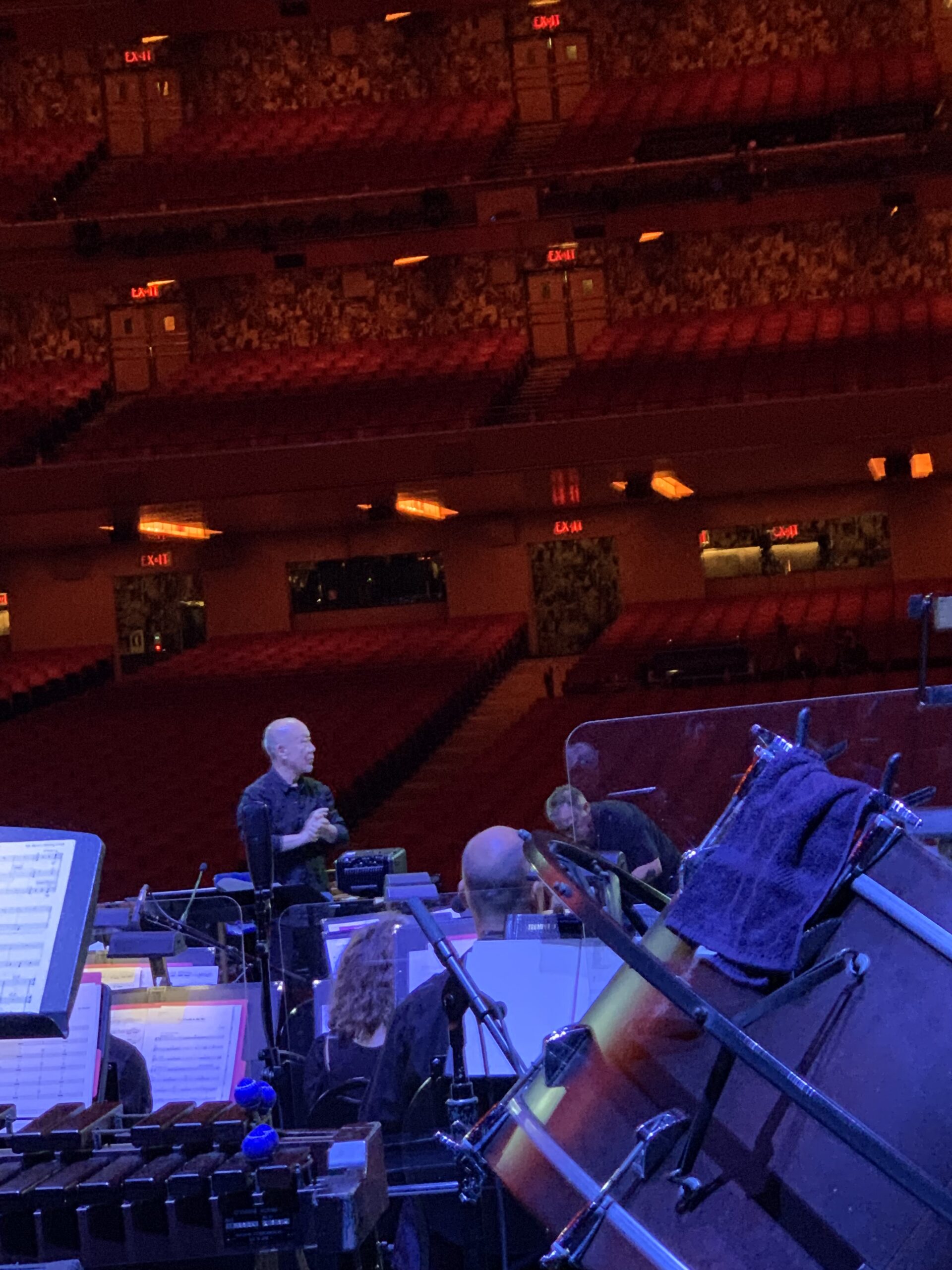 During the concert, clips from the Studio Ghibli films played on enormous screens beside and to the sides of the stage. They were chosen more for their evocativeness than because they precisely matched the music. For instance, the segment for Kiki’s Delivery Service, begins in silence, with a clip of Kiki looking bored. Hisaishi cued the downbeat once the clip transitioned to one showing Kiki’s seaside town, which was then followed by out-of-order scenes of her flying on her broomstick, talking to her black cat, etc. 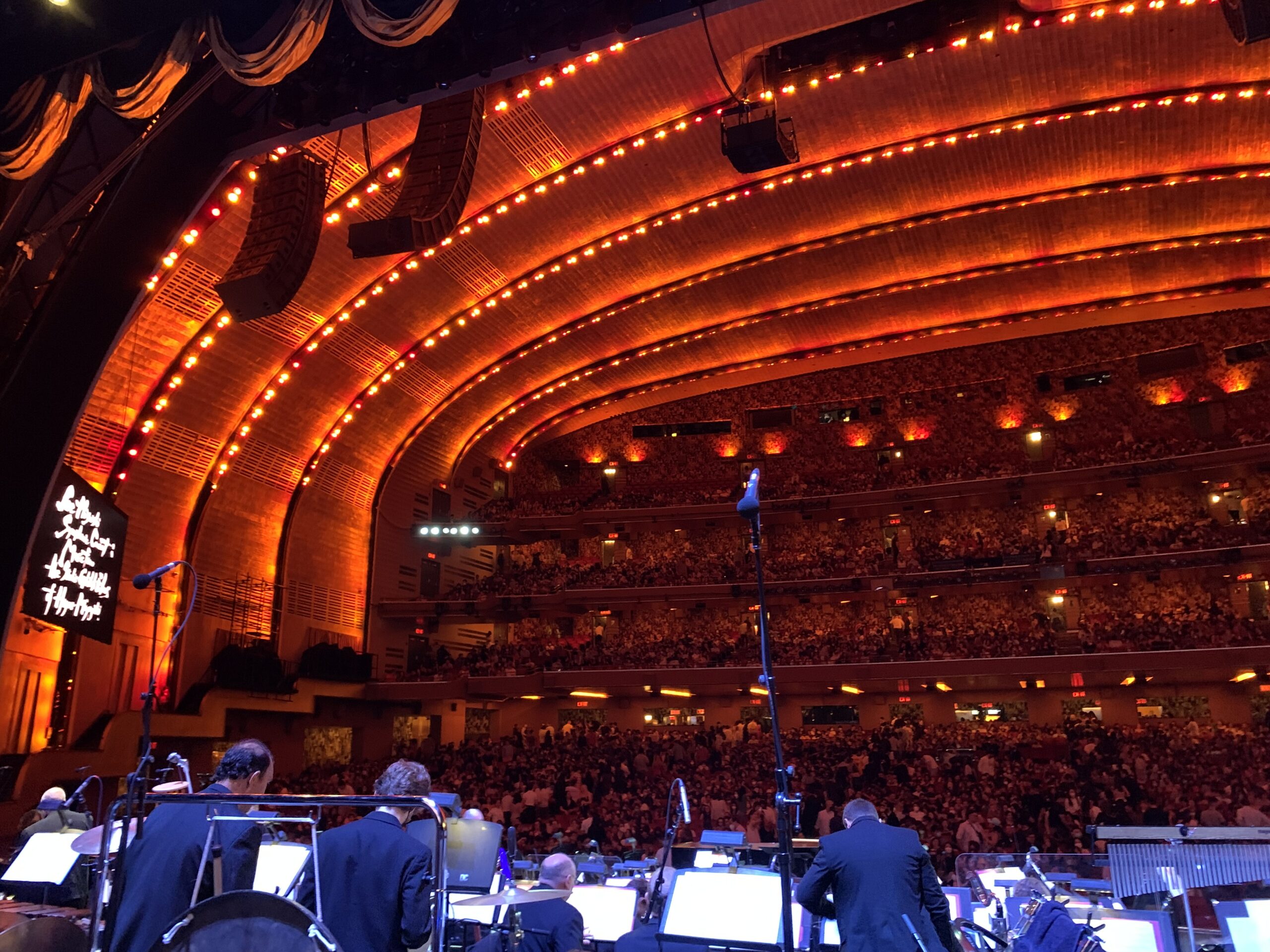 The posters advertised over 150 musicians performing. By my estimation, that’s an under count. MasterVoices provided 80 singers, there were at least 20 children in the youth choir, and the orchestra likely had 50 string players alone. In addition to conducting, Hisaishi also performed some of the piano pieces himself, including the theme song from Spirited Away, which was sung by his daughter. 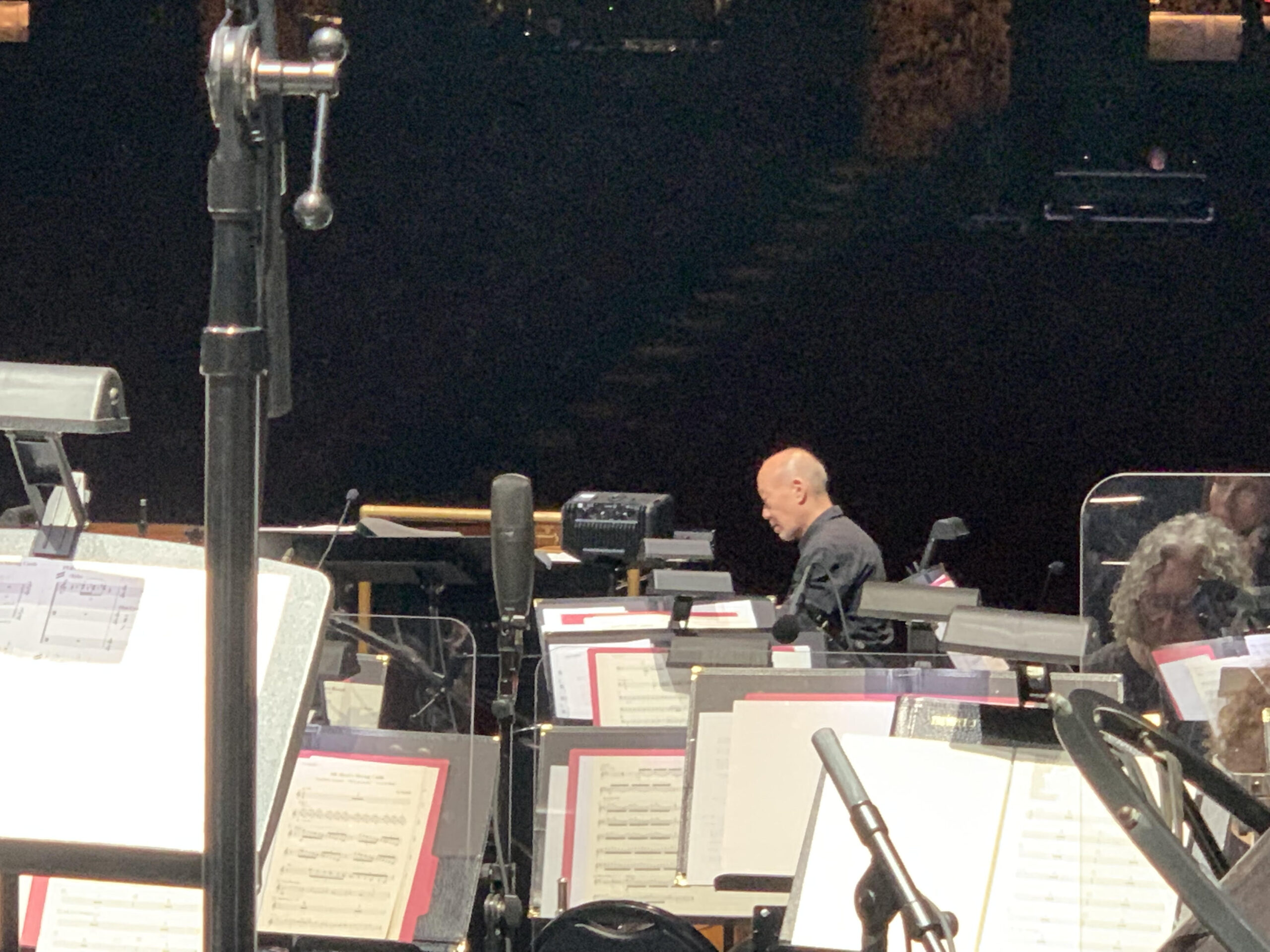 The concert was a long one, beginning at 8:00pm and ending around 10:20pm, but the audience never lost their enthusiasm. Each time a piece concluded, they would clap and cheer as enthusiastically as they did for Hisaishi’s entrance.

In true rock star fashion, Hisaishi took his bows, left the stage, came back, bowed again, left again, returned again, etc. And then proceeded to perform and conduct two encores (which we had, naturally, planned for and rehearsed). Despite being the reason all those fans came, he never let them forget all the not-famous performers who brought his music to life. With hand gestures (including pantomiming playing flutes and drums), he asked each section (choir, children’s choir, percussionists, wind players, etc) to stand one at a time so the audience could acknowledge them. 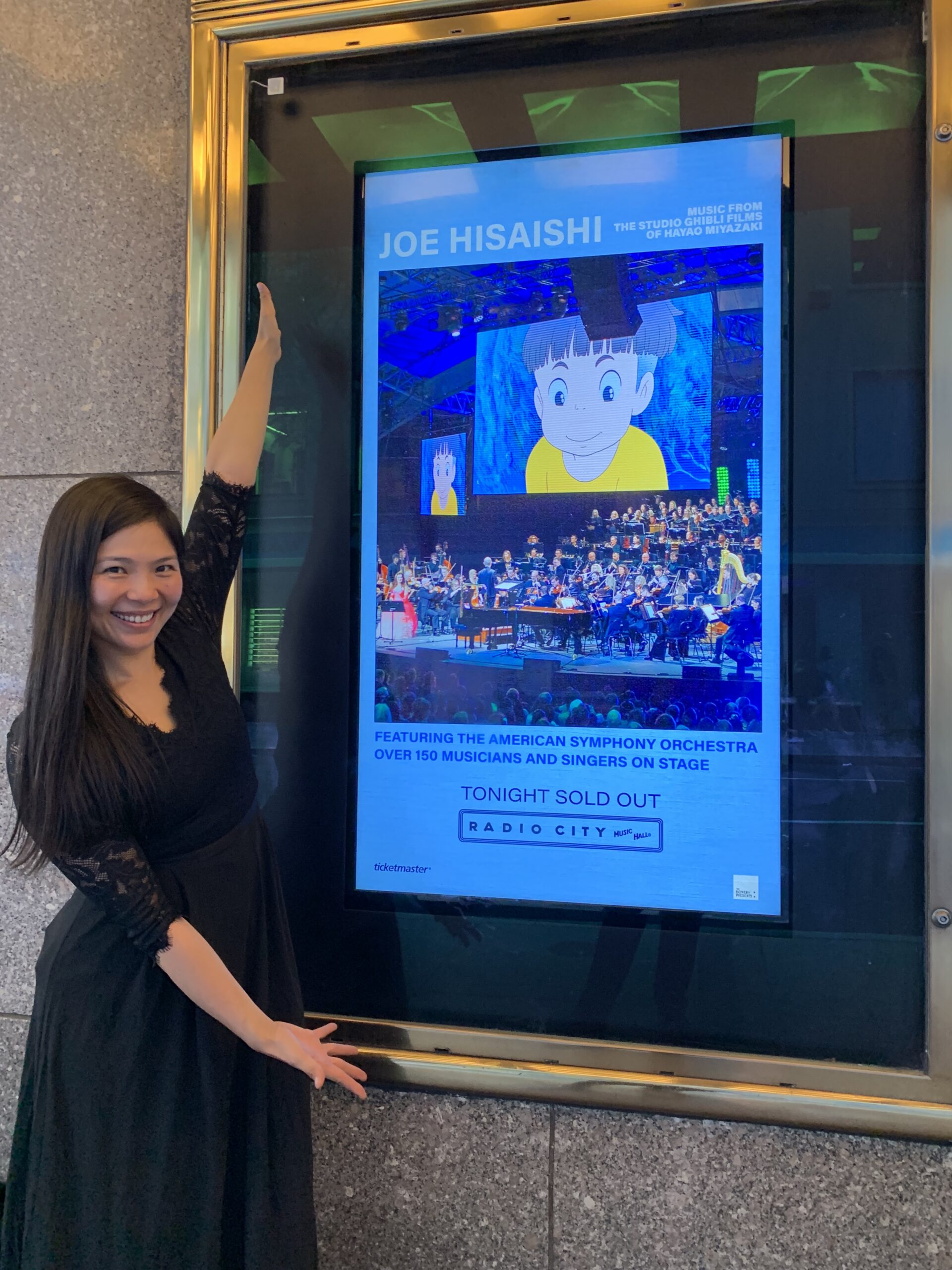 I think my favorite moment was during the theme song for Ponyo, which earlier that day Hisaishi had asked us to have more fun with. Ponyo, for those who are unfamiliar, is a charming little movie about a five-year-old boy who befriends a little goldfish, geared toward toddlers and kindergarteners. And so its theme song was cutesy and childlike – in other words, not something to be sung with the serious demeanor of a concert choir.

I don’t know if he was reacting to us or trying to direct us, but during that piece, Hisaishi started smiling and bouncing and mouthing along to the words (“Ponyo! Ponyo! Ponyo! Fishy in the sea! / Tiny little fishy, who could you really be?”). I hope the stage’s camera was able to project that to the audience, because it was truly a joy to see a composer having that much fun with his music. 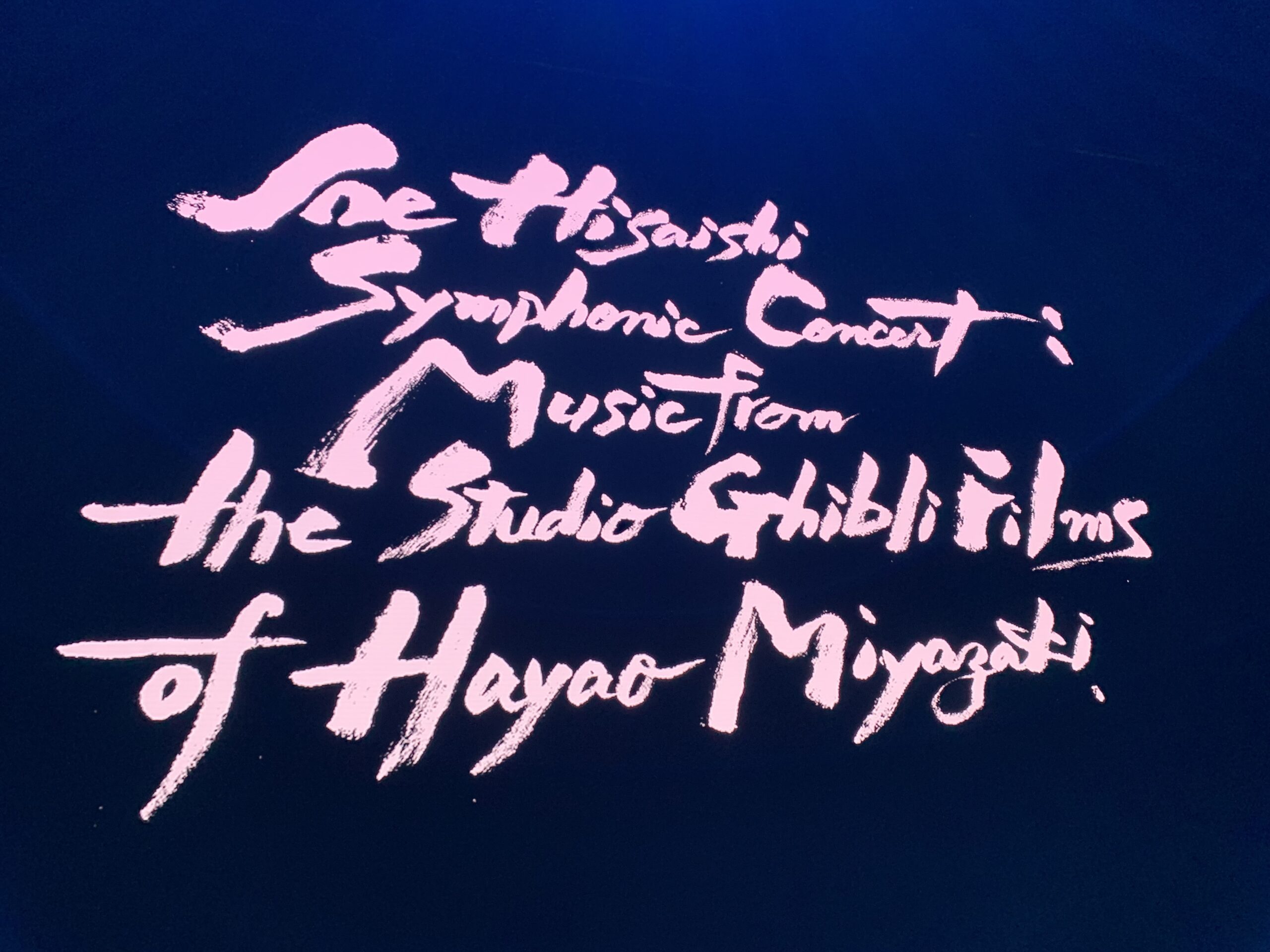 Was our performance perfect? Of course not. I won’t tell you about the part where the altos missed an entrance, or the orchestra fell out of sync with the each other, and more. But that didn’t matter. No one came to see how technically precise a bunch of classical musicians could be. They came to experience the soundtracks of their favorite films brought to life by the man who created them, and by the sound of it, they left happy.