The duo draws upon their Asian heritage to create a modern adventure set in a fictional past.

Wander the aisles of Artist Alley long enough and some of the images start to blur together. But one table that always stands out is that of Hammond Liang, also known as Hammling, a popular artist known for his vibrant, Asian-style illustrations.

In addition to drawing much-coveted images of Azula from Avatar: the Last Airbender, Denji from Chainsaw Man, and other characters from fandom, Liang is the co-creator, with writer David Chun, of the indie fantasy comic Monkey and Peach. Which was inspired by the Japanese folktale of the Peach Boy, also known as Momotarou.

“We did a spin on it based on what would happen if he’d created his own kingdom and his [descendants] afterwards,” explained Chun. “[We had] a lot of fun dealing with Japanese folklore and their monsters and their overall culture, and we wanted to use our personal history as being Asian Americans to make a fun, modern story set in a fictional past.”

In Monkey and Peach, a mysterious boy with a horn washes up on the shore of the kingdom created to protect people from supernatural threats. Years later, he must face what he is when fate brings the future leader of the kingdom to his doorsteps. Together, they go on a journey to find their place in the world.

Asked about he went about bringing this vision to life, Liang jokingly said, “I make pictures! I make pretty art!” Liang works closely with Chun to bring the story to life and takes inspiration from films, TV, and games. In addition, Liang practices traditional Chinese lion dancing and incorporates some of that background and movement into his art.

“I use inspiration from [shows] like Avatar: The Last Airbender, from martial arts, and then lion dancing, and I put that influence into Monkey and Peach, which has a very East Asian background,” he explained.

Liang and Chun are currently focusing on Japanese folklore. A lot of their creatures are based on yōkai, but they’re hoping to expand into Chinese and Korean folklore in the future. Both Liang and Chun are self-taught, with Monkey and Peach being Chun’s debut as an author. The two have been friends since college and started working on the comic about three years ago, along with their project manager/finance manager/graphic designer, David Bettencourt (aka Azroix), who they met through a mutual friend.

“The collaborative aspect, is what makes doing comics a lot of fun,” said Chun.

The process was not without its hurdles, though. Initially, Chun’s lack of detail frustrated Liang, and the two have had their creative clashes. Ultimately, the partnership thrives through a fluid back-and-forth where both creators have a chance to imbue the story with their unique visions. Chun starts each issue with a synopsis, which he later expands into a more in-depth summary and finally a full script. With each step, he discusses the story with Liang and Bettencourt to see what would make it feel smoother or more fun overall.

“It’s been a great creative process, I’ve learned a lot from [Liang], I’ve grown as both a person and a writer,” said Chun. “It’s just about learning and trying to do better every day.” 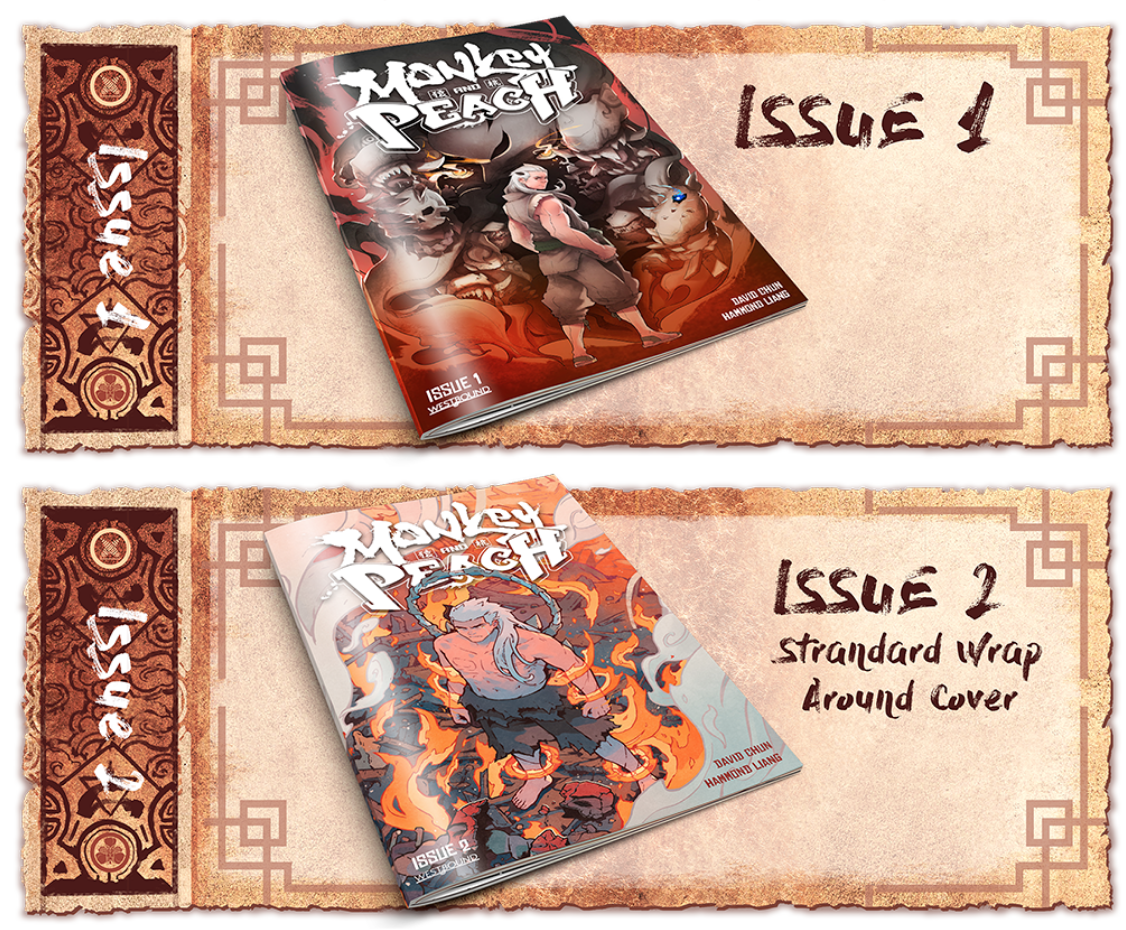 The team is currently working on Issues #3 and #4 of Monkey and Peach, which will launch on Kickstarter later this year. (At this point in the interview, Liang popped in to say, “I just make pretty pictures!”)

While Monkey and Peach is meant to be a finite tale, the creators aren’t yet certain which issue it will end on (they have planned out up to Issue #8).

For the latest updates on Monkey and Peach, including when the Kickstarter for the next issue will launch, follow @monkeyandpeachcomic on Instagram.