No Man’s Sky is a tale of space exploration and self-discovery. This is the diary of one such intrepid explorer who has lost all memory of the time before. Also, she’s very bored.

Today I woke up on an unknown planet with my ship in serious disrepair and not a soul near me. If that’s not an ad campaign against drinking and flying, I don’t know what is. Weird thing is though, I don’t remember the crash or throwing back enough booze to black out. Even scarier, I don’t remember a thing about myself, my name, or even what I look like. I’m just a creature (I assume bi-pedal because of the picture on my HUD but I don’t have the ability to look down and check) with a broken ship, an exosuit, some weird mining device, and you, Diary. My one true friend.

So I’m on this planet, Diary, and I figure, well shit, I’ve gotta fix my ship. I mean, sure, the planet was perfectly habitable with tons of resources, flora, and fauna. It wasn’t too hot or cold and didn’t have a lick of radiation. Can you believe that? But I said to myself, “Self, you gotta fix this ship and get on outta here. That there universe is calling your name.” And you know what, Diary? I did it. I fixed my ship and high-flied it out of that gorgeous planet with all the cute animals that were too small to eat me.

Of course, it was a flight by fire, because I don’t remember even learning how to fly a ship into outer space and sure, the controls were a bit odd. I kept spinning around and around in circles trying to figure out how not to kill myself. And nowhere inside this blasted instruction manual does it tell me how to slow myself once in a pulse jump. That’s how I know this can’t possibly be my ship. Were it truly mine, I would have left the proper guides in the glove box.

Oh Gods, Diary! Do you think I stole a ship?

I’m sure it must be some misunderstanding. I can’t possibly be capable of such an act. I’m a good bi-pedal creature. The voices in my head tell me so all the time. 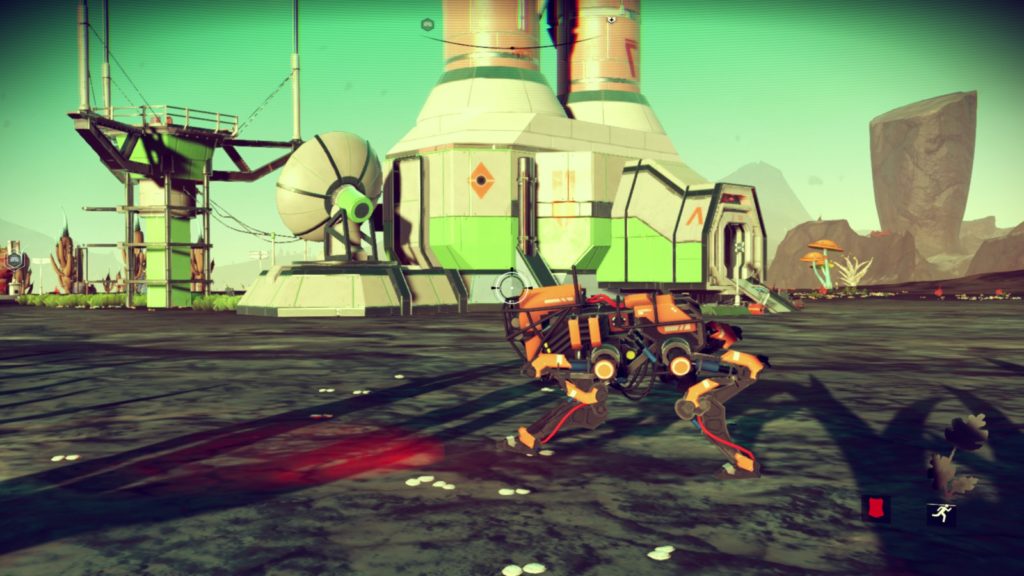 Oh! I’m not sure how I achieved it with my multitool but I managed to snap a photograph of this adorable little death machine today. He didn’t look like indigenous fauna, but he was so cute hopping around on metal feet, lasers flopping every which way. I was sad when I had to kill him for his titanium, but at least I named him before he died. Rest in peace, Rupert.

Later, I had a nasty run in with a space pirate. At first I thought he was angry I didn’t properly signal my intentions to land on the nearby planet but now I’m wondering if he might have been the original owner of the ship in my possession. Not knowing how my ship’s weapons worked, I accidentally blasted him out of the sky in attempt to contact him with my coms. To honor his passing, I sold all of the Lemmium on his ship and bought a multitool upgrade with the extra credits. I think it’s what Spare Pirate would have wanted.

Having lost my memories, I don’t know any of the alien languages, but slowly I’ve managed to pick up the words for “interloper” and “sad.” However, the locals must have a different understanding of language as a whole because they keep using those words side-by-side, not grasping what they mean. Or how hurtful it is when I try to sell 15 stacks of Plutonium.

I came across a space station orbiting the third planet I explored but it was quite a sad affair. I felt sorry for the poor fellow with the odd eyes stuck in that lonely little room. I don’t know much about this world or how I got in it but it seems to me something named a “station” would be a smidge more lively. The chap seemed quite solemn about his lot in life so I spared him a bit of carbon for his troubles.

Oh, but you don’t think he used the carbon for…drugs, do you? Should have offered a Gek Charm instead?

I spent a significant amount of time exploring several other planets finding nothing truly worth mentioning. Luckily for me, I’m pretty good at this whole self-made entrepreneur thing. Resources are plentiful and I’ve made quite the stack of credits selling them off. However, the local culture seems to be a bit…lacking, if you catch my drift, Diary. I wonder now if these creatures, these Vy’keen, are a solitary race. Every outpost I’ve stumbled upon has several structures built up–nothing major of course, we are on the outskirts of the universe, or so the voices in my head tell me–and inside is one lonely fellow, left to tend to his or her duty.

Even though monetarily I want for nothing, my days are lonely. If only I could find another bi-pedal-esque creature to share my time with things might be more interesting for me. As it stands, time passes slowly, storms come and go, but I’m still here, alone, crafting bypass chips and warp cells to continue my journey onward. It’s a shame I can’t stitch some of this extra fabric to my suit to carry more goods but something in the atmosphere forbids this action. It’s like there’s an all-knowing entity stopping me from creating more pockets.

Come to think of it, I tried to paint my spaceship with blood the other day and the blood disappeared without a trace. The more I think about it, the more I feel as though I’m stuck in a vast world of unending star systems that can’t be changed.

But that’s just silly talk, right? I’ve probably inhaled too much heridium dust over the past few days. It’s going straight to my head.

Well, Diary. I think I’ll call that a day. It’s frigid on this new planet but I’ve found an outpost that looks exactly like all the others I’ve come across, so it seems as good a place as any to catch some shut eye.

Until another stardate, may the asteroids be with you,