CultureComics
May 9, 2022
By: Christian Angeles

We say our goodbye, as we reach the end of Ms. Marvel: Beyond The Limit.

It’s hard saying goodbye to a really great story. Especially, for those kinds of series that come out of the blue like Samira Ahmed’s run of Ms. Marvel. From our interview here at The Workprint to the resulting binge-read of every iteration of the Ms. Marvel comics, there was just so much to love about Kamala. A character whom I believe the world will be super excited about seeing upon the debut of her Disney+ series on June 8th.

Without a doubt, Beyond The Limit serves as an ace introduction to the character. When I’d first picked up the series, I had no idea what I was getting into in seeing this young woman grow and change; the cultural zeitgeist of acceptance regarding that weight of being the first Muslim Pakistani-American superhero. How big of a moment this is going to be that I’m entirely certain your average superhero fan understands just yet.

Representation matters. Things are changing. The youth are more accepting against the prejudices of the old…

If you don’t believe me, ask some kids you know about their takes on superheroes. The things that they watch on Disney. The characters that are being portrayed like Captain Marvel or Kate Bishop. Perhaps, explain to my nephew and niece, why is it that when watching Spider-Man and His Amazing friends… it’s Miles and Gwen and Ms. Marvel, that they’re excited to go see? 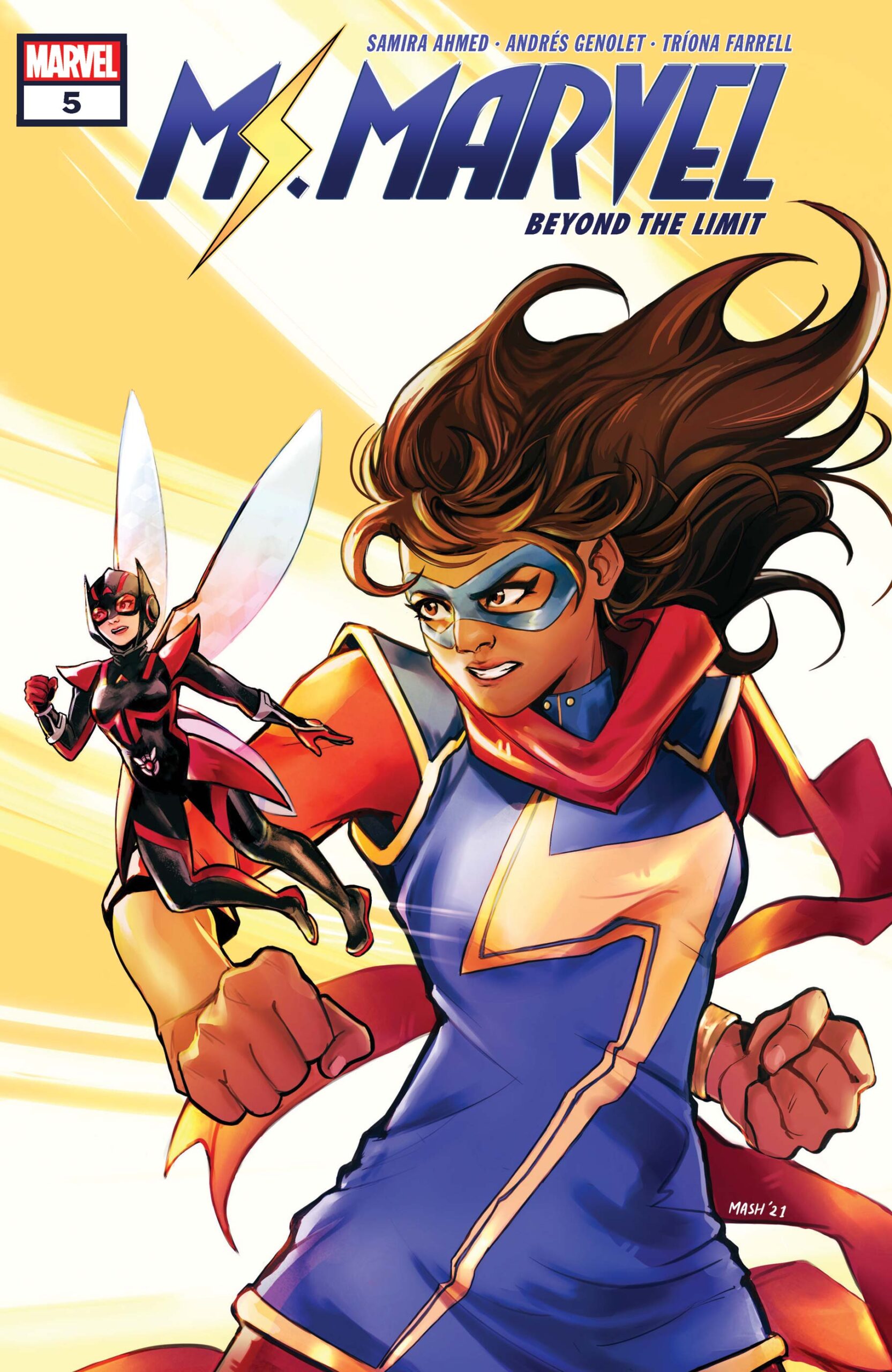 In the final issue of Ms. Marvel: Beyond The Limit, we see this run of the story come to a close. After issue #4’s harrowing conclusion which saw Kamala Khan at her most vulnerable, the series wrap-ups nicely not with brawn, but with brains, and the power of friendship triumphant overall.

Now, the best of the Beyond The Limit run has been its worldbuilding. Since the beginning, everything has felt like an homage to the best of Ms. Marvel’s history. The costumes, location designs, and character setups are all very in-tune with the comics. Nothing feels out of place and the storyline with the doppelganger allowed for a unique look back at all the iterations and abilities of Kamala and her journey.

That being said, Qarin’s storyline is super tragic! A shapeshifter from another part of the multiverse borrowing Kamala’s powers in their shared time/space, the revelation in issue 5 about how Qarin’s abilities justify a lot of the mechanics used in this run. It showed us other Kamalas from different worlds, and mostly, served as a unique plot device to get us to reexamine the character. My only qualm is that ultimately, having illusory projections as an extension of Qarin’s abilities instead of featuring actual multi-verse travel, did wrap things up a little too conveniently. As everything was more illusory rather than world-altering. Still, one of the most interesting story parts is the psychic connection between Qarin and Kamala. It’s how Kamala borrowed matter from a version of her in a different universe, thus in turn, having Qarin subatomically borrows Kamala’s powers. As mentioned, so much of this run focused on Kamala’s and Qarin’s abilities getting out of wack, as each was pooling energy away from the other. It’s a struggle that saw us deconstruct what these other-worldly abilities mean to both Kamala and Qarin. It also raised the stakes, as their instability, might’ve meant the end of the world.

Now, in this journey of self-discovery of what it means to be Ms. Marvel, we got to see really cool uses of S.T.E.M. thanks to Samira Ahmed’s brilliant showcasing of it. This introduced a whole lot of pop-science physics featuring strong women characters; where Nadia Van Dyne, in particular, played a very significant role by the series conclusion. So kudos to the writing.

Nadia’s presence adds a lot to the science. Her bouncing theoretical physics ideas with Bruno is exactly the kind of nerdy weird fans of the series come to love. I can’t stress enough, that the subtleties of this run have done a great job of embracing that and the artwork by Andres Genolet really pops in every one of these weird science scenes. Atop of this, the Bollywood and multiversal artwork at the beginning were easily some of the funniest I’ve seen about the series.

This brings us to the best part: that this run is fun! Between the action and the friendships, the science fiction rigamarole, and the Kamala montages… there’s just a good chunk of seeing Ms. Marvel doing her thing. Especially, in regards to the most stand-out part of the limited-run: the food!

I loved it and it made me really wish I still had that good of a metabolism. Issue 5 here features Balushahi, which was a unique and delicious type of Indian donut. Why this is important? Is because it takes a bite out of heritage and culture here, as Kamala’s need to feed both her abilities and Qarin’s, made it so that Ahmed could drop a lot of references to food. It’s delicious and super fun to see easter egged throughout the run. 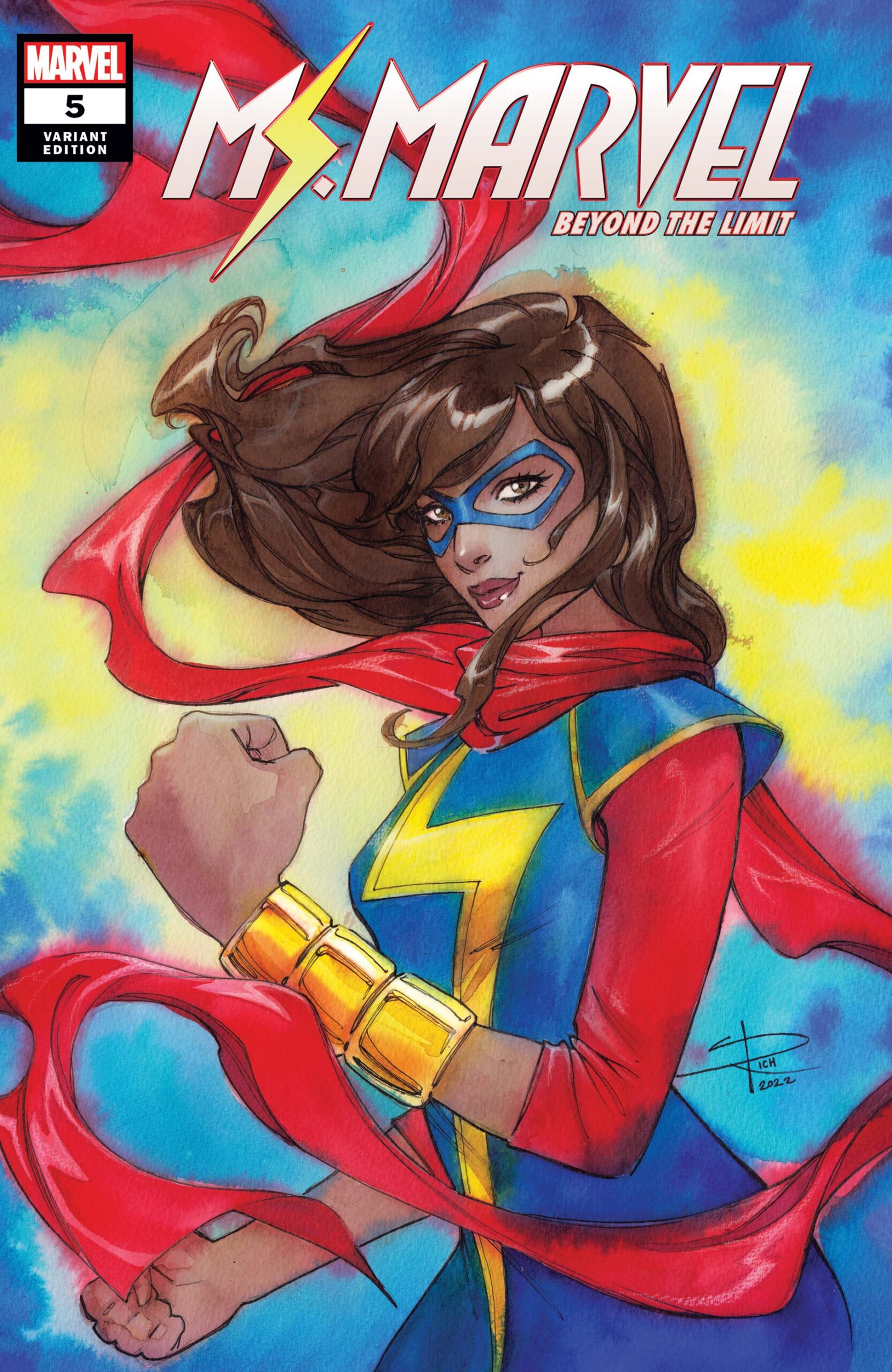 It’s a fun run that does its job to entertain, but also, empowers your Y.A.-themed lady heroines. Thematically, we hit the typical teen-superhero beats where Kamala’s biggest strength: is of course her friends and the actions she’s taken to be a caring type of person.

And sure, the conclusion is your stand-of-the-mill heroes save the day. But I liked that as that’s also sort of Kamala’s M.O. in a lot of her comic runs. The series is more about the culture of being Muslim American, and really, about the kinds of friends and company Kamala keeps as she continues to figure herself out.

Most important of all,  I like that the run also ends in hope. As Qarin can choose to be a new hero in her universe, which is really interesting to me. As it’s really important to have stories these in today’s world…

You really need to give the next-gen of kid readers hope. And I think this five-issue run of Ms. Marvel: Beyond The Limit did exactly that.

You can buy Ms. Marvel: Beyond the Limit at your local comic book stores. Also, if you liked Samira Ahmed’s run of the series, she’s also releasing a new book called Hollow Fires, a new YA book about racism and finding hope, Which debuts May 10th.