Steven and Layla Try and Thwart Harrow Before Things Get Weird

Bear with me, folks. Normally Christian would do his normal fantastic job of covering Moon Knight. But since he’s away covering PAX East, I’m playing pinch hitter this week. And honestly, I welcome the chance to cover Moon Knight, since it’s a very different Marvel series.

The episode mostly deals with Layla and Steven. At first, they’re both dealing with the aftershocks of Khonshu’s imprisonment in stone. As a direct consequence, not only is Steven unconscious, but he’s also bereft of any supernatural assistance. That means no healing, no increased strength, and no suit. Which, honestly, Steven is totally fine with. He just wants his life to go back to before he discovered he was an unwilling superhero. But the problem is that without those very powers, he’s very much at the mercy of Harrow and his men. Or he would be, if not for action-hero Layla. 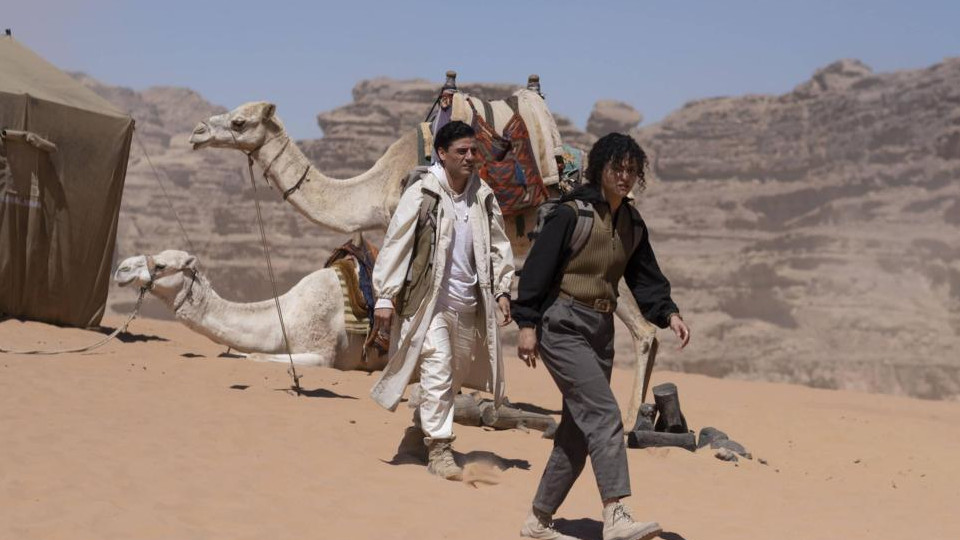 As Steven lies sleeping on the sands, men in armed vehicles start shooting at him. Layla thinks quickly and rolls him to some cover, but the ruffians keep after them. Using a well-timed flare and some quick maneuvering, Layla manages to blow them to bits, and get Steven away safely. It’s clear that the situation is weird for her since Steven is in the same body as her husband. Hell, she remarks at one point that he even smells the same. But regardless, they’re both very different personalities.

There are some fun romantic moments between Layla and Steven as they arrive at Harrow’s dig site. It’s clear Steven is starting to develop feelings for her, and Marc is not happy about it. He threatens Steven with all sorts of bodily harm, which seems even crazier since doing so would hurt him as well. And after an especially awkward kiss between Layla and Steven, it seems Marc gains temporary control to punish the goofy Brit git. 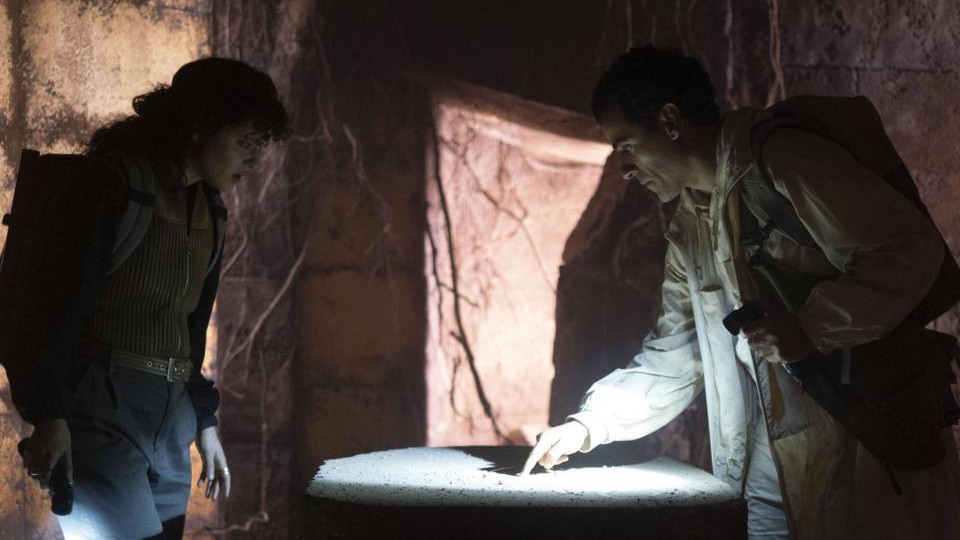 What I most liked about The Tomb was how much it dialed up the Indiana Jones energy. Normally there’s plenty of that in Moon Knight since it involves studying ancient relics and tombs and fighting zealots and monsters. But it’s even more poignant since Steven / Marc are very fragile human beings without Khonshu to assist them. And just to play on that even more, it quickly becomes apparent Harrow may have entered the tomb first, but he didn’t do so without resistance. There’s something called Heka priests already there, and the best way to describe them is as zombie Egyptian sorcerers with a penchant for carving up their prey. 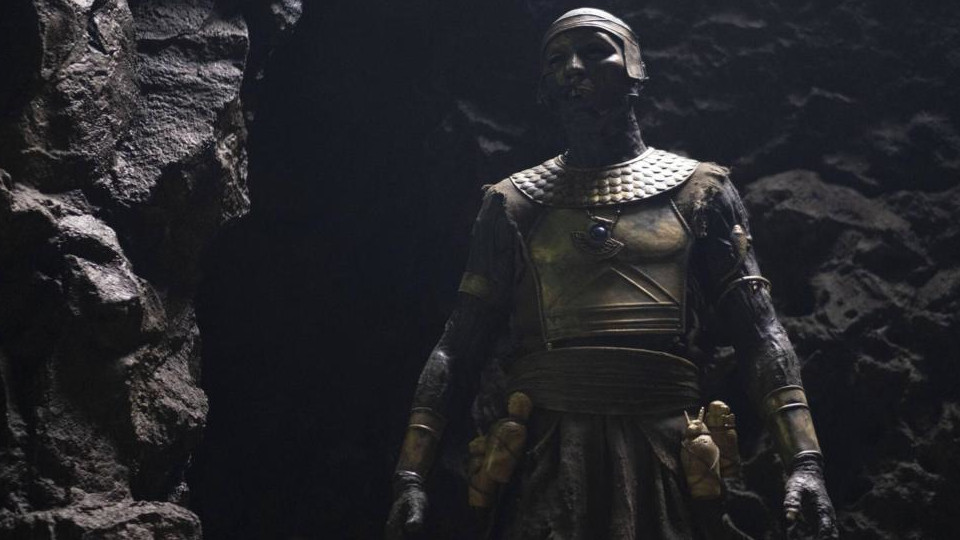 I appreciated a supernatural foe other than Harrow’s Anubis soldiers. Cause while those are fine, they’ve been overused by now. And it helps how incredibly indestructible the Heka priests are in comparison to the naughty puppies. They’re seemingly bulletproof, very nimble despite the whole undead thing, and super sneaky. After encountering them, Steven and Layla have to frantically race in separate directions, and of course, a priest manages to snag Layla. Unlike Steven, she can handle herself just fine, and she summarily uses another flare to good effect, plunging it into the eye socket of the creature before sending it flailing into a deep, dark pit.

Harrow gets some screen time with Layla, and starts to reveal unfortunate secrets. He tells her that when he read Steven’s aura, he saw his past pain and sin. And most of that contends with Marc being there when Layla’s father was killed. She angrily confronts Marc about this, and he takes control long enough to tell her that he had no hand in her father’s death. It was his partner that murdered him and then tried to kill Marc as well. Which is likely where Khonshu first intervened to make a new avatar. 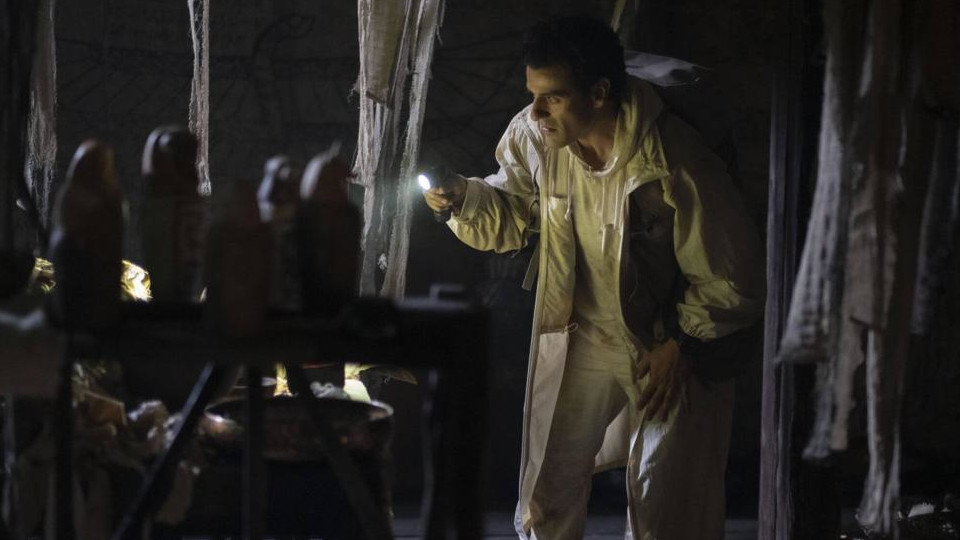 I also enjoyed watching Steven nerd out in Ammit’s tomb, and deduce the path forward using his keen mind. He eventually finds the sarcophagus that is supposed to contain Ammit’s ushabti, but finds something strange. I won’t spoil the reveal, but suffice to say Ammit’s original avatar was a very unconventional pharaoh. 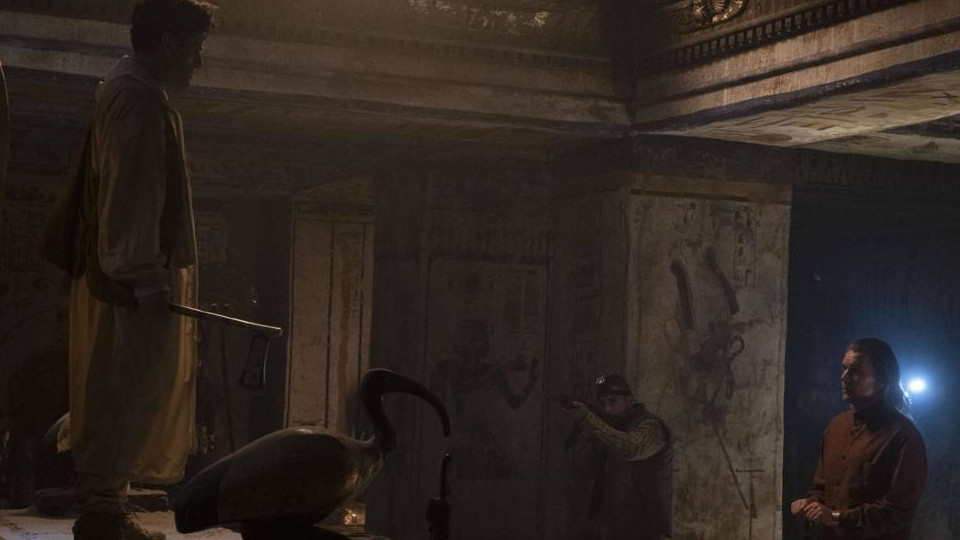 It’s all going as expected until Harrow catches up with the couple in the tomb, and seemingly fatally shoots Marc twice. As he falls into a pool of water, things get really weird. We see a corny movie with a hero named Steven Grant. Then we’re taken to a blindingly white room that appears to be a mental ward. Marc is doped up and barely able to talk, and his psychiatrist is none other than Arthur Harrow. And while part of me wondered if this was a mind fuck showcasing the depths of Marc / Steven’s mental distress, I suspect it’s something else.

As Marc gets loose, he finds a sarcophagus in the ward. Inside is none other than Steven, somehow in his own body. And as the two men race around trying to escape and find answers, they are stopped dead in their tracks by Taweret, some darling hippo goddess. Which really makes me think the men are stuck in the Egyptian afterlife, though I’m uncertain how they got there without Khonshu’s help. 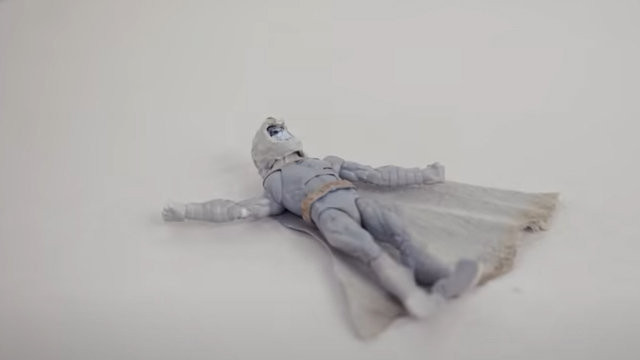 Overall, The Tomb was another solid episode of Moon Knight. It kept revealing new details at a good clip while allowing the various personalities of Moon Knight time to breathe. And though it appears Harrow is trying to resurrect Ammit using her former avatar, I have my suspicions that somehow Ammit might get brought to life inside Layla. As for how Marc and Steven will escape their predicament, I’m eager to find out!

Be sure to tune in next week for The Workprint’s latest review of Moon Knight. And thanks to Disney for the images used in this review.