While the fourth episode of Marvel’s Runaways “Fifteen” wasn’t the most exciting episode in the world, it was still entertaining. “Fifteen” begins with a flashback to the morning Nico found her sister Amy unresponsive with a bottle of pills by her side. Nico shouts and screams for her parents but when she instructs her smart house Wizee to call the cops, Tina Minoru not only nullifies the request, but she also uses the Staff of One to magically knock out Nico when she attempts to contact the authorities via her cell phone.

Fast Forward to present day, where Nico is thumbing through Amy’s diary which Nico stole from her mother’s office. She delicately grazes her fingers over the words inked by her sister which includes entries such as “Life is good because of Mermaid and Seahorse” when she is interrupted by a group chat invite by her fellow Runaways. Apparently, she is the only one in LA to not hear about Destiny’s dead body washing up on the beach. The confirmation of Destiny’s death further bolsters Nico’s developing theory that her parents killed Amy and the suicide was just a cover story.

With every passing episode, I swear that this high school follows the Rosewood High philosophy of education. The kids go to school, have lunch, and then head to their after-school activities.

Nico and Alex’s extracurriculars include heading to the police station to report their parents as suspects in the deaths of Amy and Destiny. When Nico first asks Alex to accompany her to the cops, he declines but he soon changes his mind after he sees Gert and Karolina teaming up. He also realizes that Nico probably needs someone in her corner right about now. 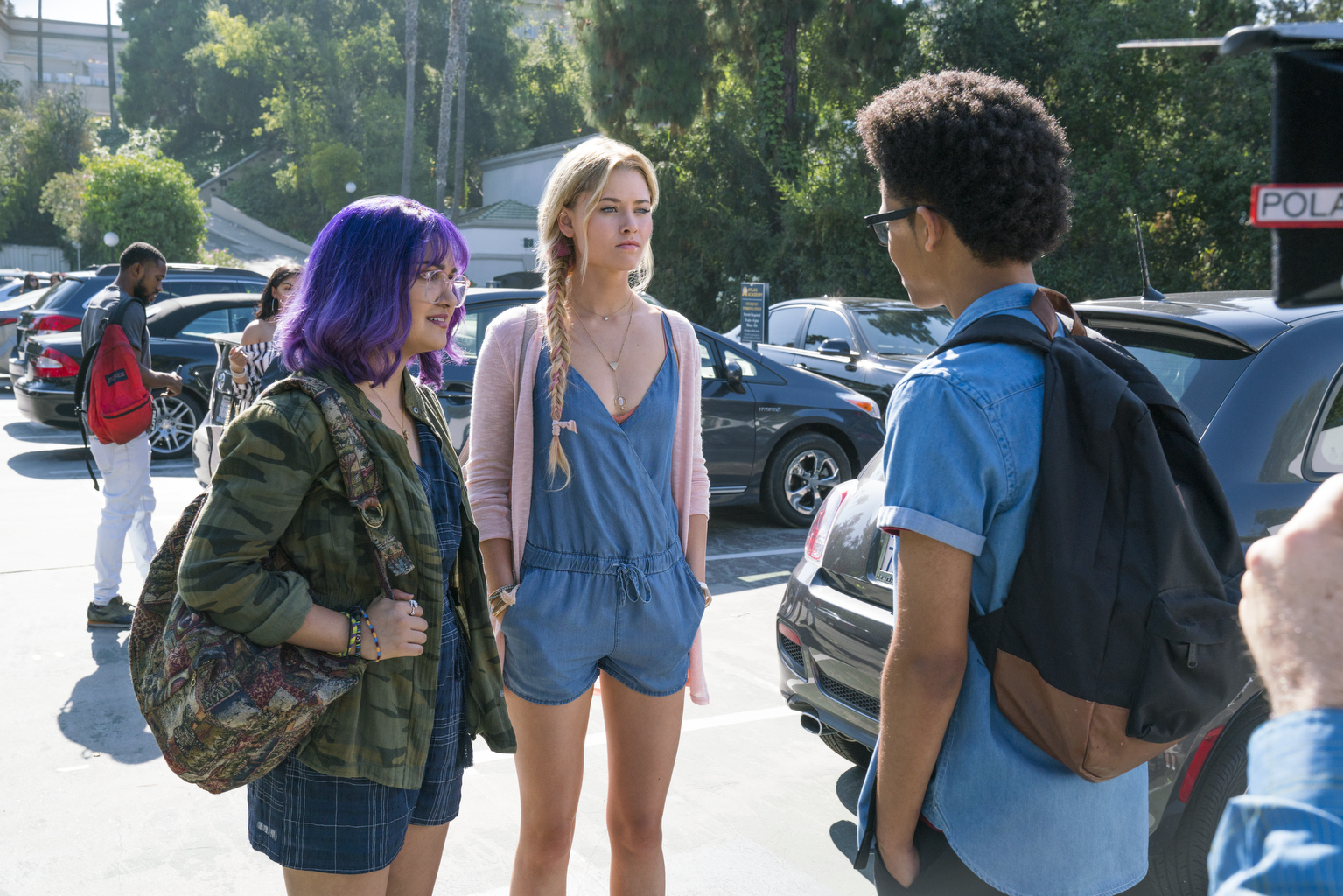 At the station, the pair quickly realizes that the LAPD doesn’t take teens reporting murders seriously. But Nico is not one to back down and she refuses to leave until her task is complete and she makes her statement. That is until she sees the cop the same cop that secretly visited her mother after Amy’s death escorting Robert Minoru and Victor Stein into the station. On that note, her and Alex scram, with new intel; The Pride has an LAPD Detective in their pocket.

Gert, Karolina, and Chase, and Gert

Welcome to another example of how horrible high schoolers can be and the manifestation of toxic masculinity.

It is the Monday after the party and two LAX predators approach Chase to demand an apology for beating them up and stopping them from raping Karolina. Since Chase is one of the good guys, he refuses and decides to break a few more of their ribs before Karolina and their coach intervene. Karolina still doesn’t know what happened the night of the party, but the rumors flying around school are that she hooked up with the two LAX douches and Chase beat them up because he was jealous. This results in one of the “mean” girls calling Karolina a “lacrosse ruining slut.” I hate high schoolers. 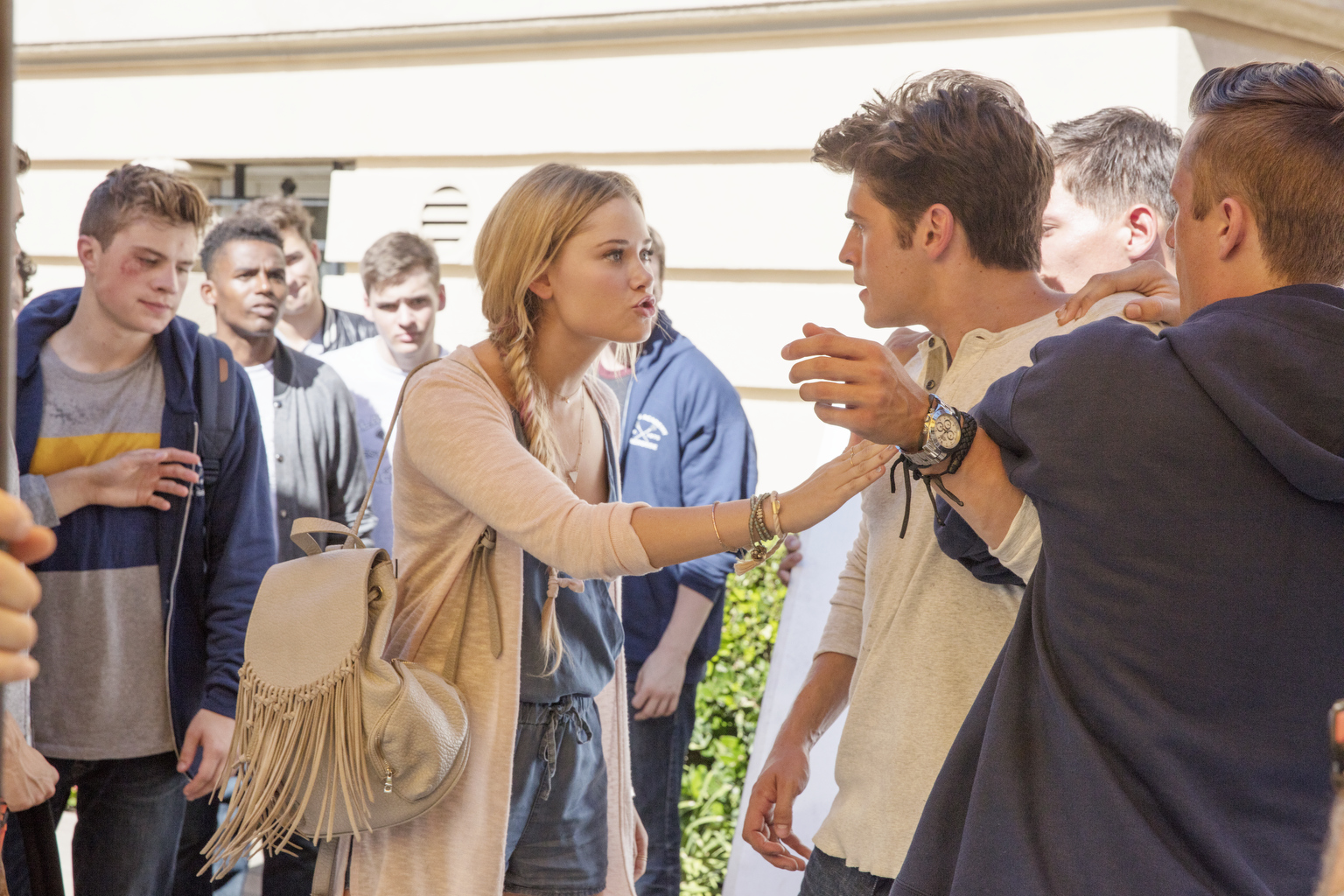 Still in the dark about everything that happened at the party, Karolina decides to focus on something more concrete: proving her mom’s innocence. She is convinced the Runaways didn’t see an actual sacrifice, but probably a non-sacrificial ritual that she has never seen because it is above her level in the church. She enlists the help of Gert, because sisters stick together, and they head to the Dean residence. After some bonding and investigation, they copy an encrypted ULTRA file from Leslie Dean’s laptop onto a flash drive for Alex to decode.

Chase also shows up at the Dean residence to talk to Karolina about what happened at the party. There has been a lot of discussion about how the inclusion and handling of the rape scene served more as a vehicle for Chase’s character development than anything else, and this episode further supports that argument. When Chase finally admits to her what happened that night she is more relieved to know what happened than upset that these two guys were about to rape her. I know that everyone deals with situations in their own way, but this seemed to be about her appreciating what Chase did for her more than it was about what she actually went through. It was also, yet again, used as a plot device because Chase’s admission prompts Karolina to show Chase her rainbow powers.

Karolina and Gertrude pass the encrypted files baton to Alex and Nico. When Alex cracks the code, they find a list of teen church member. One each year for the last 15 years. Their parents have been taking in scared and desperate teens to serve as their pool of potential sacrifices. One name that isn’t on the list is Amy, leaving Nico to re-examine her theory regarding her sister’s suicide yet again. 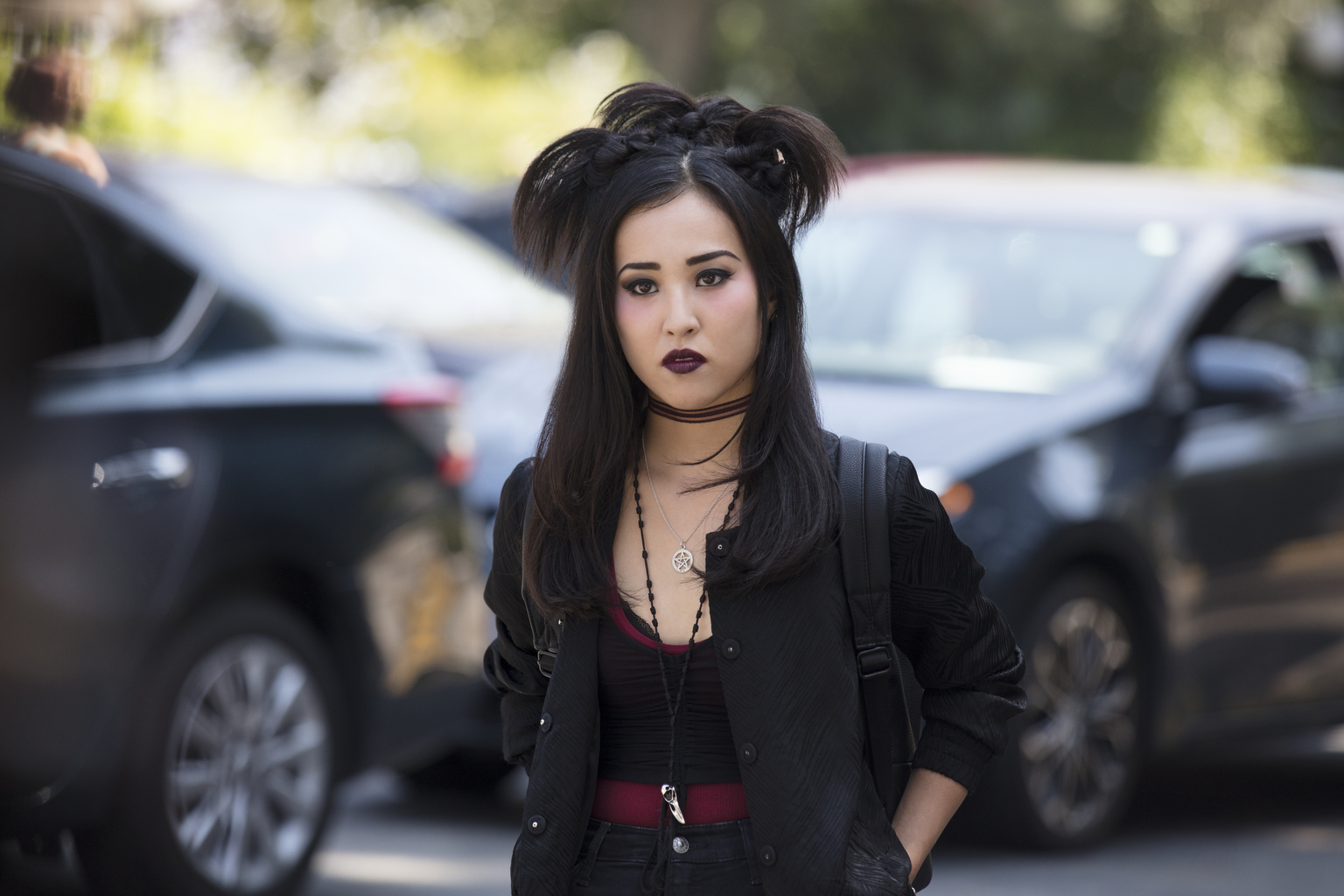 There are definitely suspicious incidences surrounding Amy’s death. The fact that it happened the same night as the sacrifice, the fact that Tina wouldn’t let Nico call the police and LOCKED DOWN their home after finding Amy, the fact that a corrupt detective came to their home assuring Tina that he would “take care” of things. That is all hella sketchy. All of those events coupled with Nico discovering that Amy’s diary was not a book of dark scribbled prose allowed her to think she could make sense of the loss of her sister. She didn’t miss any signs, her sister didn’t take her own life. It was something else. Something bigger. But just because Amy’s diary didn’t show signs of a depressed individual doesn’t mean that she wasn’t struggling. There is still so much of this Amy storyline that needs to be uncovered, I really don’t know where this plot will lead.

The parents are dealing with their own issues this episode since the girl they thought they sacrificed in a wonky machine was found on the beach.

Victor calls an emergency Pride meeting to show the rest of the group the most recent girl he kidnapped for the sacrifice, but when he arrives at the meeting his van is empty. Also, Victor looks like he hasn’t showered in 5 days and has been on a week-long bender. Not trusting Victor to successfully kidnap someone in his state, Tina assigns Robert to accompany Victor on his next kidnapping trip. This backfires because their next victim fights back and the cops come to the scene. Moral of the story: Tina, if you want something done right, you do it yourself.

The Yorkes decided to skip the emergency Pride meeting to search for their genetically engineered dinosaur. Unfortunately, The Yorkes’ absence makes the other members question their loyalty to the mission and Tina Minoru uncovers their tentative plans to flee The Pride. Ruh roh.

A rundown of the parent’s drama would be meaningless if we didn’t discuss Leslie Dean. I legit have no idea what is going on in her storyline. In my previous post, I theorized that the decrepit man on the bed was her father, and god do I hope I am wrong. When Leslie goes to visit him this week, she apologizes for taking so long, GETS NAKED, and then jumps in the bed so the pair can spoon. It was very disturbing, I can’t erase that image from my mind.

You may have noticed I haven’t talked about Molly much. Well, that is because our youngest runaway was barely existent this week. Starting with the teens’ video chat, Molly was placed in the background, and I mean that literally. While Gert is at her desk chatting with the other four members of the team, Molly is out of frame chilling on Gert’s bed trying to get a word into the conversation. I understand not having Molly and Gert call in separately, but at least have them share the screen! Gert could have brought her computer to her bed to include Molly or pull up an extra chair for her. Poor Molly. 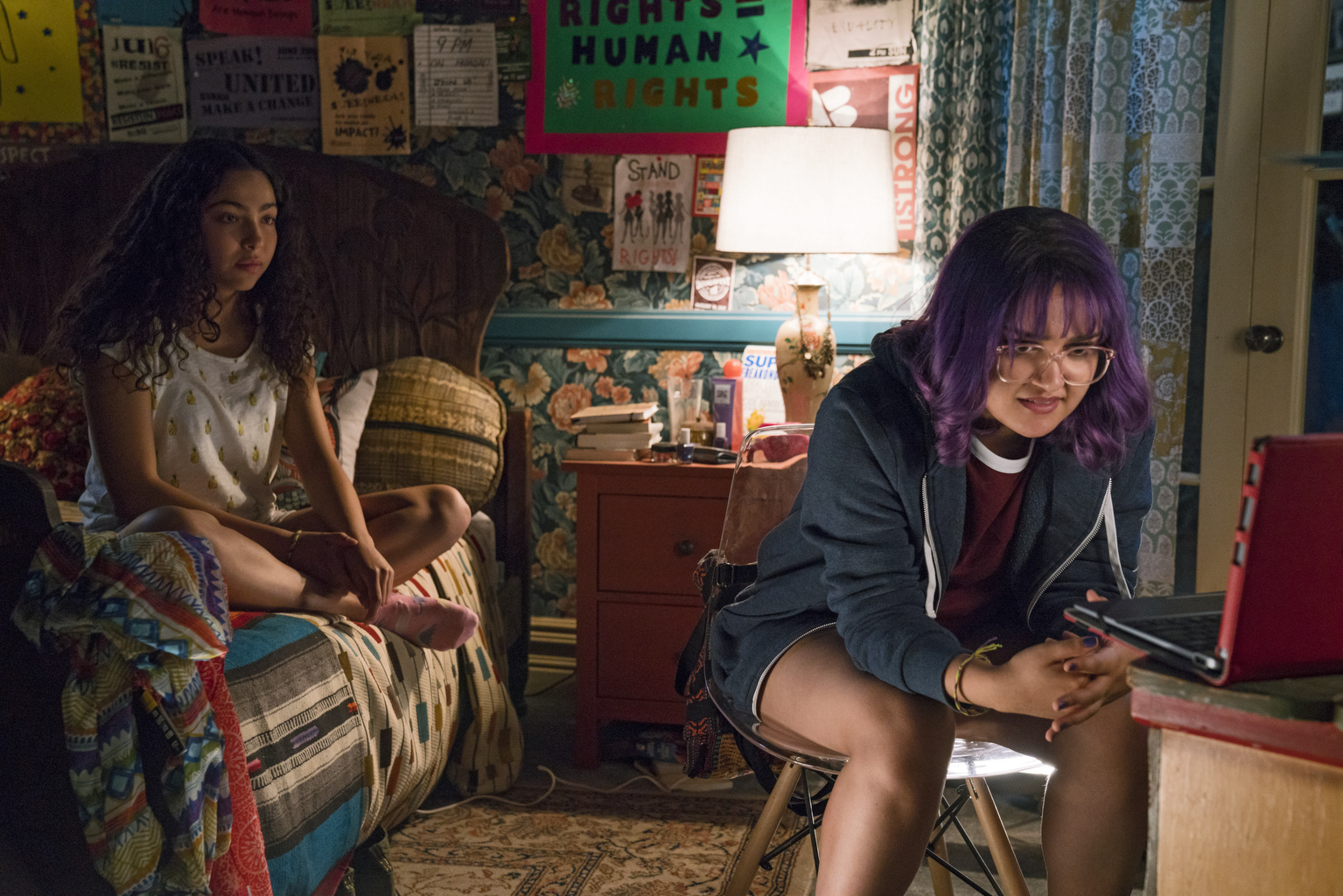 Later in the day, while home alone, Molly decides to take up Mrs. Wilder’s offer to answer any questions Molly has about her parents when she is interrupted by a loud noise that turns out to be Old Lace, the genetically engineered dinosaur her parents have been searching for. Luckily, Gert gets home in time to psychically train her dragon and save her sister’s life.