“I am the ill intent who set upon the traveler on a road that he should not have been on.” – Wilson Fisk

We’ve gone 12 hours without seeing the Daredevil costume. I will admit, when I first saw the reveal on Thursday, it was the first time I was ‘meh’ about anything from the show. So, I took with a grain of salt as we raced toward the finale.

Urich’s death came as a complete shock to me. I really expected Matt to burst in at the end and save his life. His funeral was punctuated by the absence of Foggy, who in the meantime has been pumping Marcy (figuratively and literally) for information on Fisk’s dealings, setting the stage for what could be the comeuppance of Fisk legally, and Matt getting ready to enforce justice in case that fails.

Owlsley meets the coward’s death that he deserves. Did anyone really think Fisk was going to let him get away with poisoning Vanessa? In fact, I thought Owlsley was going to go by the Oberyn Martell way, dying by elevator shaft seemed a bit too clean. Of course, this means that the Kingpin has to tie up loose ends, the one being Hoffman, a witness who could blow the whole thing. Luckily, Matt gets to Hoffman in time and proceeds to blow the cover off of the whole thing.

Playing ‘Nessun Dorma’ while Fisk’s criminal empire crumbles around him is  genius. Seeing so many of the series villains, both big and small, go down was fantastic. Obviously, this wasn’t the last that we’d be seeing of Fisk, but at this point, the flawlessly executed escape during prisoner transfer has been overdone (a la Dark Knight and Skyfall). However, this set up the final confrontation between Matt Murdock and Wilson Fisk. 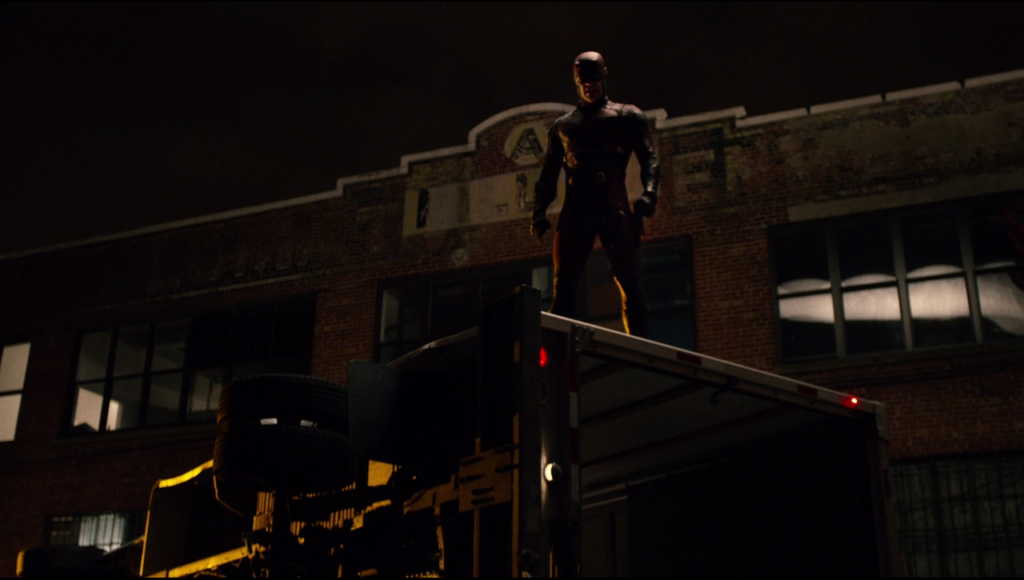 And finally, enter Daredevil. Seeing the first shot of the costume made whatever doubts I had disappear. Watching the suit in action was brilliant. Daredevil moved like he does in the comics, his suit didn’t constrain him at all, and the ricochet of the billy club made my inner fanboy squeal. This fight painted the two combatants perfectly. Daredevil, a perfectly honed and trained fighter reliant on speed, and Fisk, a brutal force of nature with no mind. However, those Murdocks have a bit of the devil in ‘em, so Matt ends up on top.

The series comes to close with scenes that wrap up the storylines, like Nelson & Murdock getting back on its feet. The two most haunting scenes though, have nothing to do with our heroes. Wilson Fisk, now clad in his iconic white, staring at the wall sent shivers up and down my spine. And finally Vanessa, slipping on the engagement ring, and staring out into the abyss. If Marvel and Netflix deliver a second season, seeing Vanessa reign as the Kingpin would be something we’d all want.

Have thoughts on the series? Share them below in the comments section!

Previous article
Marvel’s Daredevil Episode 12 – “The Ones We Leave Behind” Review
Next article
‘Game of Thrones’: “The Wars to Come” – Just Not In This Episode