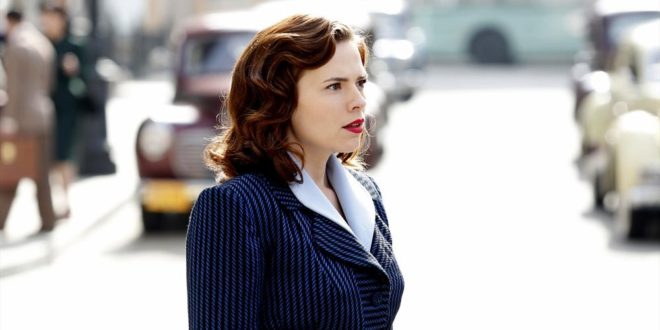 It’s safe to say that the whole of Agent Carter has led to this moment: Peggy walking into the SSR — the office that initially rejected her, laughed at her, and ignored her — and being received with applause, respect and a standing ovation for her work in stopping Ivchenko, aka Dr. Fennhoff. Not that it lasts. No sooner does Peggy get her validation than does the U.S. Senate appear, ready to commend the man they think should be recognized for the job: Agent Thompson. Peggy seems unconcerned though, content to let Thompson take the credit she rightfully deserves, and it’s a great show of how much she’s evolved from the past few episodes.

Because that’s really what this finale was all about — Peggy’s growth. I feel bad for the people who gave up on or wrote off Agent Carter because they were tired of the lapse in action, because in doing so, they missed the journey that was the payoff of the entire eight episode arc. The Peggy we saw at the end of the finale was vastly different than the Peggy who walked into the SSR on Howard Stark’s orders in the Pilot, and the beauty of a short mini-series type show is that we’re able to recognize that difference.

But let’s back up — the episode started where we left off last week, with Peggy, Thompson and Sousa investigating Dottie’s movie theater massacre. While checking out the damage, Sousa is the unfortunate recipient of Item 17, which causes him to violently attack Thompson before Peggy and the police subdue him. When he wakes up shackled to a bed (in a scenario that reminded me very much of Black Widow and Hawkeye in Avengers), he seems to be confused at his actions, but does remember the urge of wanting to kill Thompson. As he’s trying to explain the weapon’s effects to the team, who should appear but none other than Howard Stark (and Jarvis. Always Jarvis.) I had a wonderful moment of happiness when Jarvis comedically put his hands up, which I feel sums up the series quite well — it can be dark and intense at times, but it still manages to inject humor in those moments that deserve to be a little lighter.

Naturally, no one is too thrilled to see Howard, until he explains his reasoning for returning: he heard about the attack on the movie theater, and felt like he needed to come back and clean up his own mess. Item 17 is known as “Midnight Oil,” and according to Stark, it was designed to keep soldiers awake during the war. Obviously, it wasn’t intended for homicidal use, but once the military stole some, they used it on the Germans in Finnow. Peggy reveals that Ivchenko is actually Doctor Fennhoff, and Stark agrees to be bait to draw him out. First, though, he wants to see his inventions — and is less than pleased to find out how the SSR has treated them, much to Peggy’s annoyance.

At a press conference (which Howard seems to be handling better than his son would some years later), Thompson clears Stark of all charges, when he’s interrupted by what seems like an attempt at an assassination. It’s merely a ruse, however, as Peggy soon learns when Stark is driven off in a car with the police officer who had earlier stopped Dottie and Fennhoff in their travels.

Once news of Stark’s capture sinks in, Peggy and Thompson put two and two together: it’s VE-day, and that means that Fennhoff must have something bigger planned — like an attack on Times Square. (If it’s any indication how much of a New Yorker I am, I actually asked out loud, “why would you want to go Times Square?” before realizing 1940’s Times Square was probably less touristy than it is today.) We then flash back to six months ago, where Stark is shown meeting Dottie, which I thought was a cool little Easter egg — I really like that Dottie would’ve infiltrated Peggy’s life in this way, knowingly or unknowingly, and it’s always fun for me to see how womanizing Stark really was. In the present day, Dottie and Fennhoff have taken him to the same secret hanger where he met Dottie in this first meeting.

Fennhoff proceeds to explain how Stark’s Item 17 killed his family at Finnow, which leads to a truly great scene from Dominic Cooper. Everyone really sold it in this final hour, but Cooper — who I feel hasn’t gotten enough credit — was wonderful in this whole exchange. It’s easy to pass off Howard Stark as a sleazy, uncaring guy who only likes money and women, but if Cooper showed us anything, it’s that Stark has a heart. And when Fennhoff was talking to him about the damage he’d unknowingly done to his family, you could practically see the guilt setting in, which made the final act of the episode that much more poignant. Even though Stark’s actions on the plane were influenced by Fennhoff’s hypnosis, the underlying feelings were prominent.

It also made it that much more significant when Jarvis learned that by default (being the only person able to fly a plane) he had to be the one to make the sacrifice and take Stark down, should he not be able to shake himself out of Fennhoff’s spell. As Jarvis takes off, Peggy confronts Dottie and Fennhoff and the two ladies finally get to face off. And unsurprisingly, the fight is well worth the wait. Agent Carter‘s stunts this season have been nothing short of fantastic (not surprising given the great work Marvel TV does with their stunt sequences) but this was intense and impressive, and one of my favorite moments of the hour.

Peggy seems to get the better of Dottie, who ends up being thrown out a window, landing on an airplane wing. Meanwhile, Fennhoff has Thompson and tries to convince Sousa to shoot his friend via hypnosis. It’s a tense couple of moments until Sousa turns the tables and knocks out Fennhoff instead, revealing that he’s been wearing earplugs, therefore making it impossible for Fennhoff to brainwash him correctly. Score one for Sousa! I’ve been a fan of Sousa’s from the beginning and have continually been rooting for him, so I was happy to see him kick some serious butt in the last few episodes.

Jarvis has Stark in his sights and is preparing to shoot, but Peggy attempts to radio Howard and talk him down in order to save him. In a moment very, very reminiscent of the final moments between Captain America and Peggy in The First Avenger — the strongest and most emotional scene of the night, by far — Peggy pleads with Stark not to go through with his mission. Hayley Atwell kills it in this scene, and drives home how great of an actress she is.She tells him that they all need to let Steve Rogers go, and right there, in those few words, we get the through-line of the series. Since the first episode, the show has been as much about Steve and his legacy as it has been about Peggy, or Howard, or Sousa, or Thompson. From the radio show to the blood vial to the fact that Peggy is constantly seen as Cap’s “girl” aka a dame in distress, Steve Rogers has had an overwhelming influence on the foundation of the show and on Peggy’s life. But eight episodes later, Peggy has come into her own. Like the scene in Captain America when Steve realizes his purpose in life is to sacrifice himself to save the world, Peggy finally realizes her purpose is to be enough for herself — no matter what anyone else thinks. When Peggy tells Howard to let Steve go, she’s very much telling herself the same thing. The words work, as Stark lands safely.

The second emotional scene of the night came not too long after, with Jarvis giving Peggy the vial of blood that Howard had thought he had lost during his hypnosis. What does Peggy do with this precious blood, now that she finally has it back? She takes it to the Brooklyn Bridge, and says goodbye to Steve in the most heartbreaking way possible: by pouring the last parts of him into the ocean. And in doing so, Peggy officially releases herself from what the radio shows and work places want her to be, letting the past go. She’s not removing Cap from her life, but rather, moving forward, taking the steps to become the person that we saw in Captain America: Winter Soldier — someone who has lived a life, saved lives, and changed the world.

The episode tag, by the way, was both a great payoff and an Easter Egg to Marvel fans — Fennhoff in a prison, meeting Arnim Zola (kudos to the Agent Carter team for keeping Toby Jones’ name out of the credits until the end, to hide the surprise.) What does Zola want? To collaborate, of course. He’s heard of Fennhoff’s talents and muzzled or not, he thinks they can do great work together. Would this work perhaps include working on someone named Bucky Barnes? I guess we have a year to ponder…

That’s a wrap on Agent Carter! I truly enjoyed this series, which became one of my favorite shows of the season, and I’m truly thankful to the entire team for the ride that we were taken on. Next week, we return to our regularly scheduled Agents of SHIELD — Inhumans! Skye! Raina! The growing Marvel universe awaits. 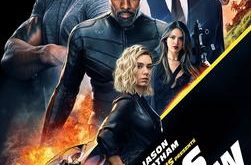