An immersive new experience, legendary comic book veteran Mark McKenna re-releases his Combat Jacks comics series as a Terra Virtua NFT collection. We talk about McKenna’s latest venture and break down what exactly is an NFT.

Last year, we covered the release of Mark McKenna’s Banana Tail and The Checkerboard Jungle last year. As somebody who knows Mark personally, I’ll also be the first to say he’s a standup guy, known for being one of the nicest names in the industry; with a 37-year history of comics production credits for all the big publishers such as Marvel, DC, and Darkhorse. Mark has been nothing but a friend and mentor to those he meets. Which is why, the re-release of Combat Jacks, a spooky pumpkin-themed horror comic created by Mark McKenna, Sam Eggleston, and Jason Baroody, is something to be excited about.

Combat Jacks is the story about a marine squad with futuristic high-tech weaponry who are sent to investigate the disappearance of prisoner terraformers on the newly discovered planet, Maia. A planet oddly rich with pumpkin-like vegetation, this seemingly habitable planet isn’t all that it seems — because the pumpkins: are alive and deadly. This NFT comic collection is dropping tomorrow on Tuesday, October 26th at 5pm BST | 12pm EDT | 9am PDT.

You can purchase the NFT comics on TerraVirtua’s virtual marketplace. You can even partake in tomorrow’s AMA with Mark McKenna himself.

Got a question for comic book legend @MarkMcKenna419? 💭

Submit your question in the replies below and we'll select 3 to be used in next week's AMA with Mark McKenna. If you're selected, you'll win an NFT! 😍#NFTGiveaway #NFTs #comics #comicbooks #comic #nftcollector #NFTdrop pic.twitter.com/raXy9uL24X

But What Is An NFT? 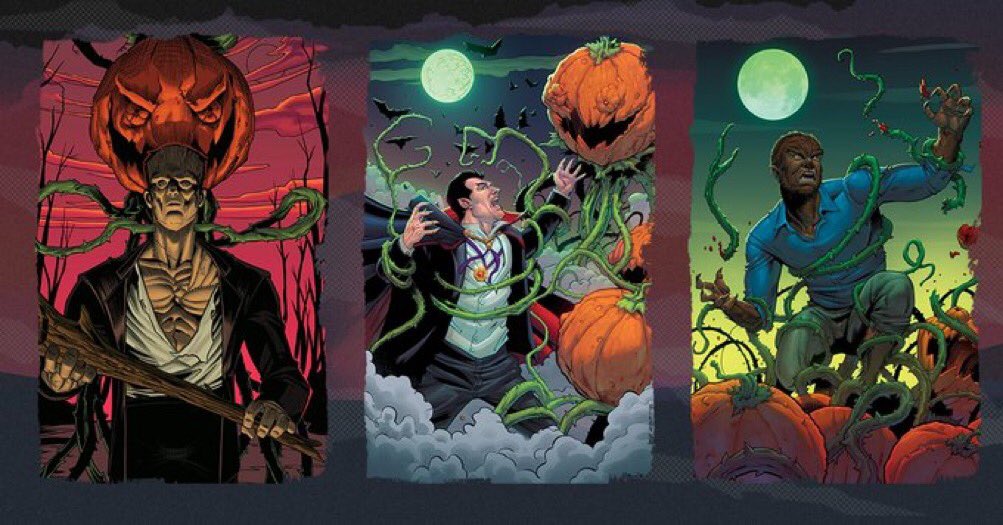 Like many people during the pandemic, I’m someone who had gotten really into investing. It financially helped me when the world was shut down and restarting. Stocks, dividends, ETFs, mutual funds, and cryptocurrencies, I sort of dabbled and learned a bit about everything this past year, including — though I personally don’t partake in them myself — Non-Fungible Tokens or NFTs.

In layman’s terms, an NFT is a digitized certificate of authenticity using blockchain technologies. It’s a unique proof of digital ownership for that registered subject stored as data on a digital ledger. Owning an NFT does not grant copyrighted ownership. It does, however, grant a license to use the underlying digital asset for personal, non-personal, or commercial use, all depending on the registered license.

Terra Virtua NFTs specializes in collectible commodities, and more importantly, immersive Virtual Reality. If the Metaverse highly anticipated by Facebook and seen in fictional works such as Ready Player One is going to be our future reality — then Terra Virtua NFTs have absolutely grabbed the attention of the Metaverse’s future investors, art enthusiasts, and digital collectors.

A big reason we have NFTs and blockchain technology is the idea of an isolated wealth outside of government influence; something that is less susceptible to declining economies and political climates. In many ways, crypto can be a better form of payment than say, for instance, the Venezuelan Bolivar, where doctors of that country earn less income than the American fast-food worker. Fifty years ago people bought gold to combat inflation. For this new generation of investors, it’s crypto.

On the downside, Crypto and NFTs have also made a lot of billionaires even more money. The field is largely unregulated (though governments are trying to change this) and some of these alternate currencies’ can end up tying back to shady forms of money income or black market purchases. Atop of this, blockchain technology is bad for the environment, as the multiple computers needed to chain transactions together in order to generate a blockchain consumes a whole lot of power. To top off all this criticism, memes get turned into NFTs and you’d be surprised at the list of things that can be turned into NFTs (basically anything).

But one thing that the media never seems to talk about, and what is, in fact, the one thing that I care about the most regarding the NFT space is that NFTs also puts the power of currency back into the hands of their artists. A leveraging of the playing field for fellow creatives who just want to be paid fairly for their art. Because most NFT spaces are being sold by a first-come-first-served approach or auctions. But what they sell for at price comes down to the fans, the collectors, and really: the public social space appeal.

It’s the artists and creatives taking back the power of their art.