I’m single, and sometimes I get miserable. Please, for the love of all that is holy, just let me wallow in my misery. Do not try to drag me out, don’t think that you have to fix me, believe me, I know that I’m broken, I’ll eventually piece myself back together. The absolute worst thing you can do is make me a third wheel, which is exactly what Josh is subjected to at the hands of his well-meaning sister.

Liz starts going off on how Josh can’t spend another Saturday holed up in his apartment playing videogames and ignoring the world outside his door.  I get this, and the speech half makes you believe that yeah, it is time to get off my ass, and the other half just makes you want to go out so you don’t have to listen to the full spiel about how “she’s out there”. Of course, this leads to a surreal scene where Josh is now a third wheel on his sister’s ice dancing date.

Couples ice dancing, which is typically not a sport for three, spells extreme awkwardness and floundering for Josh while Liz and her boyfriend dazzle the audience with their synchronicity. Now, normally my forays don’t end in embarrassing myself on an ice rink, but Josh and I both share the same trick, using our cell phones to get out of there. Of course, I usually have mine on and fake getting an important call, while he chooses to just leave his phone off and use it as a distraction brick. I’d like to think that my way works a little better.

Following the title sequence (which I really like for some reason), we’re introduced to the main conceit of the episode, which is a destination wedding in hell, literally. The whole hell setting was kind of overkill for the episode and left me feeling that it was milked for some cheap gimmicks (buying holy weapons and the purchase of a lightweight suit). A friend’s wedding where your ex is going is already a minefield. There’s no need to bring in additional fantastic elements that aren’t really played upon. 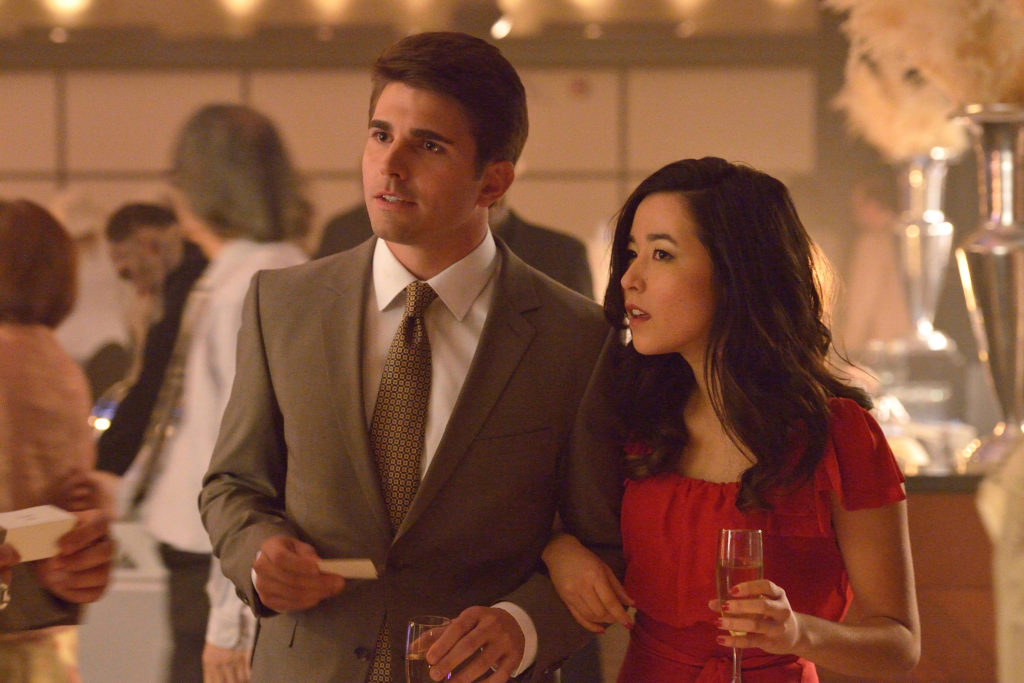 Seeing your ex is always a complicated thing. Seeing your ex in the honeymoon period of a relationship is the fucking worst. Yes, you want them to be happy, but that happy? Because of another guy? Fuck. Fuck. Fuck. Seeing Graham emasculate Josh was painful, and as much as you want to make Graham the asshole, he doesn’t really play to type. Let’s be really honest, when you see an ex, a tiny part of you wants to see them jealous, to show them that they made a mistake. You see Josh try to dance with a single girl, but what’s worse than not making your ex jealous? Your ex being so madly in love that she doesn’t even notice you at all.

Josh’s final stand, after suffering the insults and taunts of a demon that Graham slew to save Josh’s life, is a spiteful move in which he tries to paint Maggie as a cheating slut by referencing the last time that they had sex in the timeline of her and Graham’s relationship, only to realize that he has the timeline wrong. Facing abject humiliation, Josh further exacerbates his tenuous stand at the wedding by spilling red wine over the bride’s dress (Becky, of Ben and Becky, aren’t they great). He exiles himself from the wedding and after going over his sad-sack story of where he is in his life, Josh decides to man up and go into the wedding to apologize and own up to his mistakes.

The funny thing is, when he goes back in, he realizes that no one really cares about what happened. He had gotten so self-absorbed that he forgot the reason he was there in the first place, which was to celebrate the love of Ben and Becky. What ultimately happens to him is irrelevant, because yeah, this show might be about Josh, but the wedding in hell? That’s about Ben and Becky. So, get over yourself, and enjoy what you’re there for. Everything else is secondary, and maybe once you stop worrying about the million little insecurities that you have, you’ll realize what you actually have to offer.

@theworkprint
Follow
Previous articleDo You Want To Watch A Promo? ‘Frozen Fever’ Has Arrived
Next article‘Arrow’ and ‘Flash’ Heroes and Villains Unite for Superhero Spin-Off Series on the CW