The third season of Man Seeking Woman is back with “Futon” and luckily for Josh, the search may finally be over with the addition of the newest cast member, Katie Findlay (How to Get Away With Murder, The Magicians).

“Futon” kicks off with the debut of Findlay’s character, Lucy, going through what could be considered one of the worst days of anyone’s life. It’s comical how quickly her day goes from bad to worse, making it easy for me to see her being just the right person for Josh.

Exactly how bad is Lucy’s day? She breaks her phone’s screen in the morning trying to turn off her alarm, sets herself on fire making breakfast, slips on a skateboard and lands on garbage as a nearby kid calls her a dumbass, spills coffee on her work laptop, and randomly gets attacked by a puma. And yet, through this terrible day, with garbage clinging to her, Lucy still manages to go on her date with Josh and ends up telling her roommate that her day was “pretty good.”

It’s a great little scene that instantly puts Lucy down as a win in my book as a great partner for Josh. Of course, it wouldn’t be Man Seeking Woman without Josh running into some sort of trouble with the women in his life.

Josh quickly wears out his welcome in Lucy’s apartment causing her roommates to enforce a roadblock in front of the apartment. Things get surreal quickly as Megan, one of the roommates, appears on CCN News to discuss her views on “Apartment Illegals” – aka boyfriends living in apartments when their name isn’t on the lease.

The scene plays out wonderfully as Megan mimics Donald Trump when it comes to the discussion. “I love our apartment. I think it’s the greatest apartment in the world. But if we don’t start cracking down on these undocumented boyfriends, then pretty soon, I’ll tell you what, we’re not going to have an apartment left.”

When Josh returns to the apartment with Lucy, he’s met with border patrol and turned away since his name is not on the lease. He’s further mocked for not speaking the “Bachelor” language as the guard taunts him with “Rose Ceremony” and “Fantasy Suite.” Lucy can’t come to a compromise with her roommates and turns to ulterior methods of getting Josh across the apartment border. 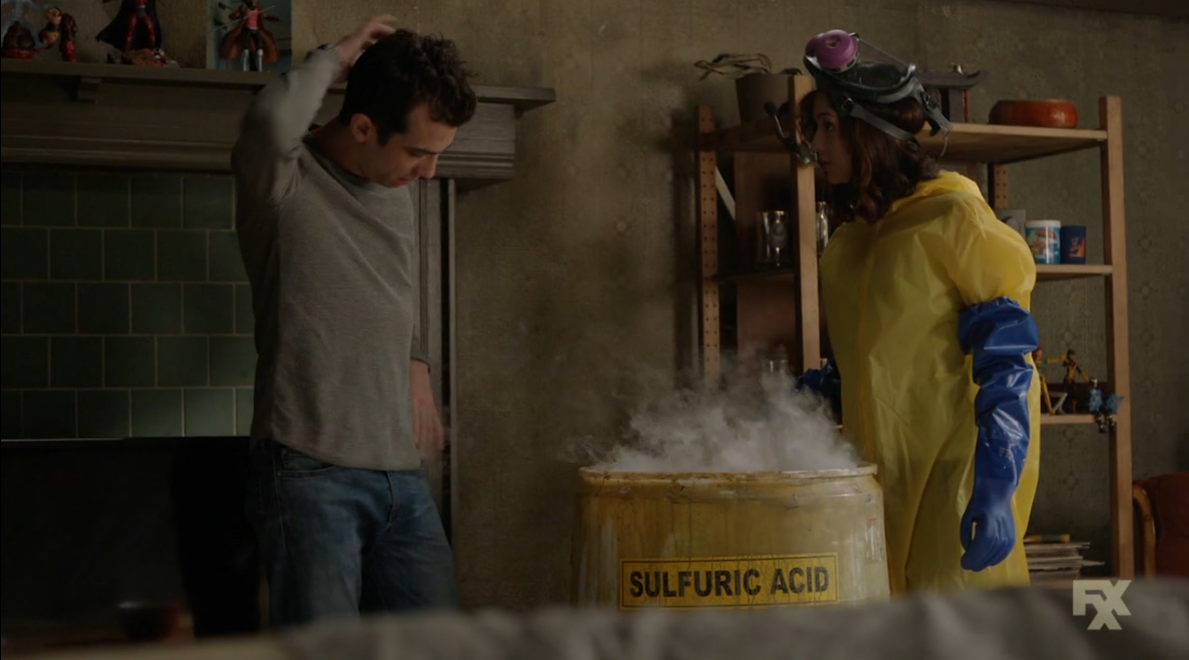 Things don’t go as planned leading Lucy to move in with Josh after an attempt to smuggle Josh across the border through a tunnel fails miserably. This ends up causing more issues as Josh’s place is a mess and Lucy attempts to tidy it up before her old roommates arrive for a party.

In her cleaning, Lucy goes overboard, dissolving nearly all of Josh’s things in sulfuric acid in order to raise the apartment to her friend’s standards. Yes, this includes Josh’s disgusting futon, Futie.

Sharing your living space with another person is not an easy thing. In my first year of marriage, my wife and I moved in together and quickly realized how differently we expected our place to look. Like Josh, I needed a Lucy in my life to help “adult up” the place a bit. But as Lucy learns, it’s easily done with compromise and conversation instead of forcing it on the other person.

It’s in her overzealousness that Lucy overlooks Josh’s feelings and sends him running to Mike who tries to convince him he doesn’t need his girlfriend. Lucy is quick to realize her mistake, making Mike’s portion of the episode seem short-lived and ultimately not needed.

“Futon” is a strong premiere for Man Seeking Woman‘s third season. The addition of Findlay is welcomed as her adorable expressions and reactions are a fantastic match alongside Jay Baruchel. Apartment Illegals and sharing apartments landed major laughs with me, but I’m hoping the rest of the season doesn’t try to pack in too much like Mike’s “Guyana” storyline. Man Seeking Woman works best when it concentrates on one or two themes per episode. With Josh and Lucy now living together, I can’t wait to see what the rest of the season will bring us.

@theworkprint
Follow
Previous article
‘Archer’ Moves to FXX With Season 8
Next article
‘Shadowhunters’: What Do We Know About Victor Aldertree?