CultureMoviesMovie ReviewsReviews
May 8, 2019
By: Christian Angeles
Image Courtesy of Lionsgate

Directed by frequent Seth Rogan collaborator: Jonathan Levine (Snatch, Warm Bodies, 50-50), what’s unique about this movie is that even though it takes place within the political landscape, the jokes don’t overtly rely on political humor. Less ‘Last Week Tonight’ with John Oliver and more Hugh Grant from ‘Love Actually’ – the movie is a tried-and-true romantic comedy, though one with a surprisingly level of depth. Its jokes flowing naturally out of awkward history, the nature of relationships, and oddly fitting chemistry – especially between Charlize Theron and Seth Rogen.

Charlize Theron stars as Charlotte Field, a Secretary of State who is being potentially vetted to become the next President of the United States. Charlotte is sharply focused on her big career ambitions. She’s one of the most influential women in the world, who more than showcases her prowess in the political landscape. Yet, it often comes at the cost of her own authenticity. As Charlotte frequently finds herself consistently making calculated decisions, sacrificing her own self-interests and self-care, all for the sake of playing the political game. Yes, she’s successful but she’s also actually rather lonely. 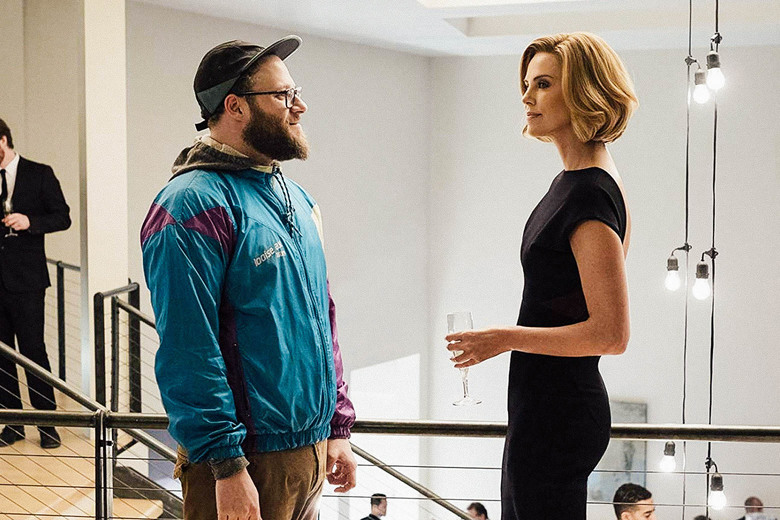 We then meet the prototypical Seth Rogen character, Fred Flarsky. An honorable yet sketchy journalist, whose integrity for the truth and embrace of living authentically, comes with the cost of being somewhat of an unbearable character. Like most of Rogen’s characters, Fred is a stoner and drug user who likes to speak his mind. Yet Fred is also somebody with a surprising amount of integrity, taking a severe career dive once he’s discovered his company’s been bought out by this movie’s equivalent of ‘Breitbart’ news.

Old childhood friends with a one-time history, Charlotte and Fred meet again through a chance encounter, listening to the band ‘Boys II Men’ (who were amazing) perform at a luxury banquet Fred’s best friend had taken him drinking.  We then get the rom-com meet-cute and begin to see the two reenter each other’s lives, rekindling a spark that’s always been there, yet was never fully addressed in their past lives.

It’s an odd yet cute cliché, but it works surprisingly well for this film. Simply because the chemistry between both actors is convincing. When the movie progresses into its second act, and we learn about their similar likes and shared history, we can’t help but sympathize with them as a couple. It’s an oddball pairing for sure, but it complements each other very well – as the two indirectly support each other’s beliefs and strengths, in a surprisingly healthy way – especially for modern Hollywood’s standards. Which is what makes the romance interesting. What’s great, is that we’re in on it from the audience’s perspective viewing their relationship from the inside. It’s the outside world that sees this pairing as gross and forbidden, which serves as the actual story’s antagonist.

And yes, it’s easy to dismiss this movie as your usual slob meets dream woman, Judd Apatow style of comedy. Which wouldn’t be entirely false, except that it misses the point. That this isn’t about Seth Rogen’s ‘Fred Flarsky’, it’s about Charlize Theron’s ‘Charlotte Field. The political intrigues of her world and those in power and how fascinating it is, yet also, detrimental to one’s personal hopes and dreams. Showcasing that the journey to the top can be a lonely pursuit that comes at too great of a cost to one’s integrity, worst of all, one’s convictions – which anyone who follows politics can attest.

Because politicians compromise and can never fully deliver as promised, something the movie knowingly acknowledges. So, what’s great about the theme, is that it eventually tells us that ‘it’s okay to be ourselves’. That sometimes, embracing your truth and being brave by being vulnerable, can potentially lead to a life of happiness…

That it’s okay to admit that you deserve to be loved.

And while it’s a hard to swallow, Hollywood message, never-the-less, it’s a good one. Which is why this movie is a romantic comedy first. One that just happens to take place within a political environment.

In an era full of polarizing opinion, where gibes and jabs could have easily been pitted between left and right, the movie instead chooses to make fun of the nature of political intensity. Yet, still, all the while, prove not to ignorant – embracing how difficult it must be to be in politics. It’s a safeguarded approach to satire but it works. As the movie seems to poke fun at the overall atmosphere in the US. Yet always, makes the comedy come first.

The jokes rely on character-driven histories and relationships, awkward reminiscing and vocalizing needs and desires – all while still balancing professional public appearances. There’s a constant pushing thread between pursuing career dreams and allowing yourself to open and be deserving of love in this move, and the film blends the two rather well.

And it’s not just typical Seth Rogen stoner jokes. It’s also some physical comedy, toilet humor, relationship driven nuances, and shockingly dirty secrets. Plus, it has all the fun beats you’d typically get from a Romantic Comedy. And one very R-rated scene that I think a majority of critics were surprised about, especially in how the creators got away with it (you’ll see it coming when it happens). 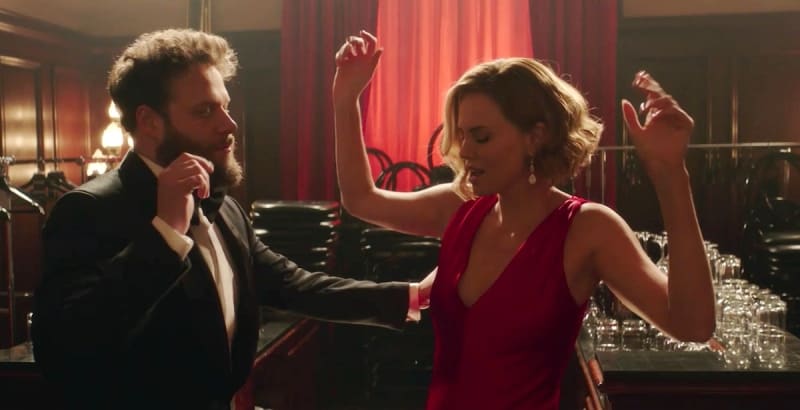 Again, I can’t stress enough: what sells this film is the chemistry between its actors. Definitely between Theron and Rogen, but also, with surprisingly stellar performances through its talented supporting cast.

In an obvious allusion towards Donald Trump, Bob Odenkirk (Better Call Saul) plays acting President of The United States. One who once played so compelling of a President on TV, that we won the actual Presidential Election. Exhausted with how difficult the job has proven itself to be after two years, he seeks to quit the Presidency to pursue a career in Hollywood as a Movie Star. Odenkirk portrays a narcissistic president who’s simply there out of self-interest, utilizing a bit of that ‘Saul Goodman’ persona.

Andy Serkis (Black Panther, Lord of The Rings) stars as Parker Wembly, a parody of Steve Bannon who abuses his power to push his corporate agenda. He serves as the film’s semi-antagonist, though is more of a hurdle to showcase our characters strengths, rather than an immediate threat. Serkis is somewhat unrecognizable in this movie (think Tom Cruise in Tropic Thunder level of make-up), but lately, he has shown a surprising level of range as of late. Mostly remembered for his CGI performance as Gollum in the Lord of The Rings franchise – Serkis has now performed compelling yet somewhat unrecognizable side characters in the major blockbuster movies: Black Panther, Planet of The Apes, and Star Wars: The Last Jedi. Showcasing a broad level of range of which the actor deserves credit.

O’Shea Jackson Jr. (Straight Outta Compton) excels as Lance, Fred’s super supportive best friend. With excellent comradery between Lance and Fred, Jackson steals the show as Fred’s lovingly sympathetic support system – he’s really good to his down-on-his-luck friend. Yet, what’s unique about this delivery of sympathy, without spoiling the film, is how it serves as a device to recontextualize Fred and Lance’s relationship. It’s very well done and gets us to address a tough topic in today’s America. Though it only works because of a very well-done portrayal utilizing O’Shea’s charisma, showcasing that he’s not too much of a chip off the old ice block (Get it? Because his father is Ice Cube…).

Which brings us to our main characters, Theron and Rogen. Charlize is a proven, academy award winning talent who’s starred in so many cultural gems such as ‘Mad Max: Fury Road’ and ‘Monster’. She’s also proven in her comedic chops again-and-again throughout her career, as we’ve already witnessed in ‘A Million Ways to Die In The West’ and ‘Arrested Development’. In this movie, Charlize plays a powerful and well-together woman, but one who hasn’t really had time to herself in ages. When she finally sees a potential chance to reconnect to her old self through Rogen’s character, she capitalizes on it – playing the role of a proactive protagonist, truly on top of her game. Atop of this, it’s the moments of strength but calculated vulnerability that makes her character charming. As her openness comes naturally when she and Rogen share the screen. They have great communication and very flirty chemistry, which is why you quickly root for the both-of-them.

Likewise, Rogen has really come into own as a dramatic actor. He plays similar drug stoner characters often but has also shown dramatic capabilities in the movies ‘Knocked Up’ ‘Take This Waltz’ and ‘Steve Jobs’. He does a good job an underdog and his party scenes with Charlize Theron really deliver some of the funniest comedy bits about the movie.

Despite the movie’s refreshing take on the Romantic Comedy, this movie is projected to be a box office flop, as it was crushed by week two of Avengers: Endgame. As non-blockbuster movie titles struggle with the increase in movie prices killing ticket sales of films outside of big budget productions.

To be honest, middle budget films seem to fare better on streaming. It’s a safer market and has many applications, such as Netflix, Hulu, Prime, Disney+, AppleTV+, Youtube Red, and HBO GO (wow, even I have to admit this is too much).

Still, I firmly believe that there’s definitely a place for the Romantic Comedy in theatres. But for it to continue, it’ll need support from viewers such as yourselves.

You Can Watch ‘Long Shot’ in Theatres Right Now