We are in an exciting time in the world of video games. Finally, no matter your preference, there is a console or device to satiate your gaming needs. Yet, old habits die hard, as big-budget titles continue to remain on consoles and PC, while mostly bite-sized gaming is what remains on mobile. However, that is all beginning to change with the rise of cloud gaming.

Many have tried to take a piece out of this new, growing market—including NVidia GeForce Now, Xbox Cloud Streaming, Steam Link, and even the soon defunct Google Stadia have all tried to bring the grandeur of larger games on the go through cloud streaming means. Whether through streaming local hardware or connecting with a system hundreds of miles away, you are now getting the opportunity to play games such as Assassin’s Creed, Resident Evil, and more in the palm of your hand.

Yet, one thing that is still somewhat unfamiliar to this marketplace is a dedicated streaming handheld device. In the past we have had options for controlling our cloud games. We have seen external hardware that can connect to your phone, such as the Backbone and Razer Kishi. Or you can connect a controller through Bluetooth to your tablet or PC. While both solutions are a way to use these cloud services, it still doesn’t change the fact that you need room to bring along another device to play. Unless, of course, you want to try playing with touch controls—and we all know no one wants to deal with that hassle.

Logitech is attempting to break this trend of superfluous hardware with its introduction of the Logitech G Cloud—an all-in-one streaming handheld. But does it meet the needs of today’s agglomerated gamer? We have gone hands-on with this fascinating new handheld to see if it’s worth its excessive $350 price tag.

The first thing you will notice about the Logitech G Cloud is its modern design. The all-white device with hints of yellow around the analog sticks and home button really catches the eye, with the black bezel around the 7-inch 1080p screen making it appear larger than it is. The back triggers and bumpers feel comfortable to press, while the standard X, Y, A, and B buttons feel great to the touch. Both analog sticks have a nice feel and response with just the right amount of give when you move them. The placement is comfortable, with no finger acrobatics or “claw” grip needed that could cramp your hands. It also features multipoint touch control support for your Google Play Store apps and games.

Gaming on this device never took a toll on my hands, with the textured grips on the back and lightweight 463-gram design making for a comfortable gaming experience over the many hours I have put into it. To place it into perspective, it is roughly the same weight as the Nintendo Switch. Also, while it boasts 12 hours of battery life, I typically keep my brightness at a higher setting, getting around 9-10 hours per 2-hour charge. 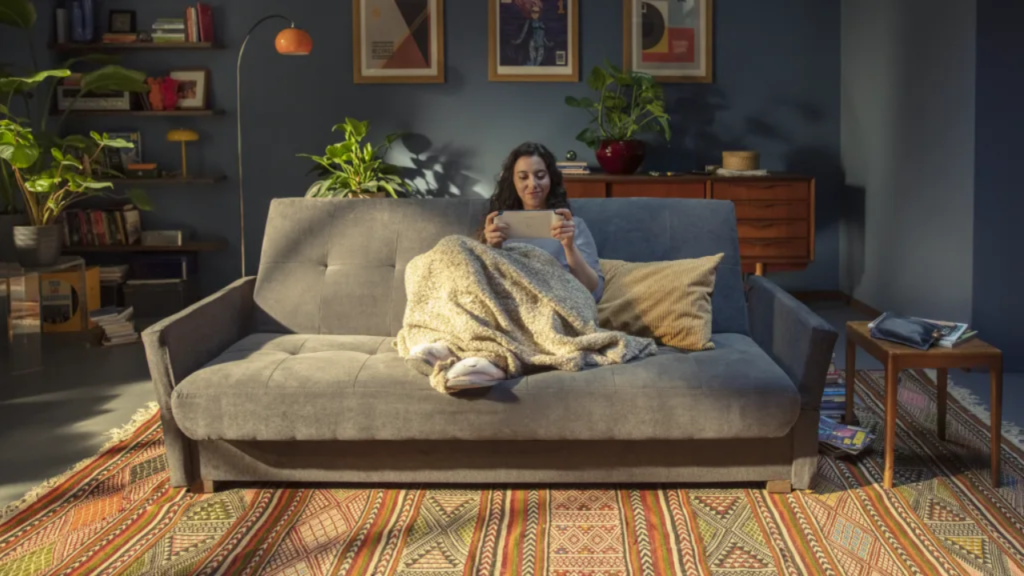 If there is a design choice I am not too fond of, it would be the placement and design of the start and select buttons. They sit raised at the top of the device, resting just above the analog sticks. While they function as they should, any time I would need them, such as bringing up the map while playing Gotham Knights, it never felt comfortable nor natural to do so. The buttons are hard to press down, and I just wish they could have put them elsewhere on the device, such as at the bottom.

Another disappointing fact is that this device only works on Wi-Fi. So, unless you have a 5G hot spot with you, you will be chained to your local Wi-Fi connection. And if that speed is not above average, your experience may be substandard. However, you can play any android games you have downloaded from the Google Play Store without an internet connection.

Where Is The Power?

When the Logitech G Cloud was announced, the first significant criticism came at the device’s power. It houses an older Qualcomm Snapdragon 720G processor, 4GB of RAM, and 64GB of flash storage (which can expand through a provided micro-SD card slot) and runs on an antiquated Android 11 operating system. However, when in “game mode,” it provides its own shell of an OS, which makes you forget that it’s just a tablet underneath with a fancy coat of paint and controller attached.

But how does it perform? It really depends on what you want the device to do. If you, like me, are looking for a machine to stream your household Xbox console or PC locally, it is mostly everything you want it to be. The majority of my time with the device was spent streaming my games over my home Wi-Fi. For reference, I have an average internet connection of around 300 Mbps down and 20 Mbps up. (It is also worth noting that all the devices I am streaming from are hardwired).

When streaming local games, lag was nearly unnoticeable in single-player experiences. However, it was slightly noticeable when trying to play online heavy games such as Overwatch 2 or Sea Of Thieves. While the games are still entirely playable, the characters have a heavier feel to them. Regarding fully remote play, such as with Xbox Cloud Gaming through Xbox Game Pass, lag was much more noticeable. As mentioned above with online games, controls had a heavier feel and never quite felt right. Everything was still playable, but I wouldn’t try any competitive modes in this situation.

Another thing worth mentioning when streaming, either locally or through the cloud, is that most games will be streaming at 720p, especially on Xbox. While controls feel tight when playing locally, the screen can still have an occasional blurriness to it. This is primarily due to how Xbox compresses the remote video feed to try and reduce lag times. Hopefully, in the future, we can expect a full 1080p stream option.

If you decide you need a bit more out of your portable playable, such as running games straight from the handheld, it does leave something to be desired. Games like Diablo Immortals and Minecraft run flawlessly, making great use of the controller support. However, certain games like Genshin Impact and Call of Duty Mobile must be run at the lowest settings and do not recognize the controls. Unfortunately, this means touch controls are currently the only way to go with these. While issues like this come down to the publisher and not the device itself, hopefully, situations like these can be patched in the near future. Since the device has access to all apps and games across the Google Play Store, I did test other games on the device, such as “Professor Layton and Curious Village” and the highly addictive “Marvel Snap.” Both games work great on the device, but the device needs to be held in portrait mode, making it look goofy in the hands.

Price Of The Cloud

Outside of the previous power complaint above, the other noticeable headline for the Logitech G Cloud since its original announcement was the price. Coming in at a steep $350 ($300 for those that preordered), it is a mightly tall ask for people to spend that kind of money when something similar like the Steam Deck can be yours for roughly $50 more. In that sense, I suggest waiting for a price drop.

However, there is a slight loophole in this conversation. If you are like me and fully invested in the Xbox ecosystem, you are more than likely taking advantage of the available Bing Credit and Xbox Credit (if not, you absolutely should be). Because this handheld is sold through the Microsoft Store, you can use all that credit toward this device. That is how I was able to get this at a reasonable price. The Xbox Credit and Xbox Gift Cards go a long way to make this device feel more attainable. For the amount I paid for this device, I am more than happy with my purchase. This is definitely something I will continue to use in the future.