‘Legends of Tomorrow’ Review: “The Justice Society of America”

This week on Legends of Tomorrow: the JSA is grumpy, Ray makes a boo boo, and Sara flirts with no one. 🙁

After last week’s premiere, “Out of Time,” I was cautiously optimistic about the second season of Legends of Tomorow. The first season of Legends was rough, only really coming into its own in the final few episodes. While the premiere had those similar roller coaster tendencies (issues with pacing and a superfluous Oliver guest bit to introduce Nate Heywood), there was hope for what the show could be in the coming months. Especially with, dare I even say this, Rip Hunter in the wind.

“The Justice Society of America” was a much more focused affair than the premiere. Legends does well when the episodes stay in one place, giving the group time to breathe and assess situations. In the second episode, they’re still in 1942, a year that at the end of last season Rex Tyler told them to avoid at all costs because it meant the end of the line for the group. But the Legends aren’t so good when it comes to following directions, ever, so after saving Einstein and New York City at the end of the last episode, the Legends ran face-first into the Justice Society of America.

The JSA is a staple in DC comics and with all the callbacks to Crisis on Infinite Earths and Flashpoint this year, I’m extremely excited for what The CW has up their sleeve for the crossover. The Legends version of the JSA consists of: Hourman (Rex Tyler), Stargirl, Captain Steel, Dr. Mid-Nite, Obsidian, and Vixen (the ancestor of the hero we saw in Arrow last season). These heroes aren’t too happy to see time travelers in their midst. In fact, they’re downright hostile. Vixen eager to toss them into a crater and saying sayonara, Hourman doesn’t give them two seconds to explain themselves, and Captain Steel isn’t pleased to learn he’s gonna be a daddy in the coming years. (For real tho, Nate. Give the man a moment before you spring all that on him.) 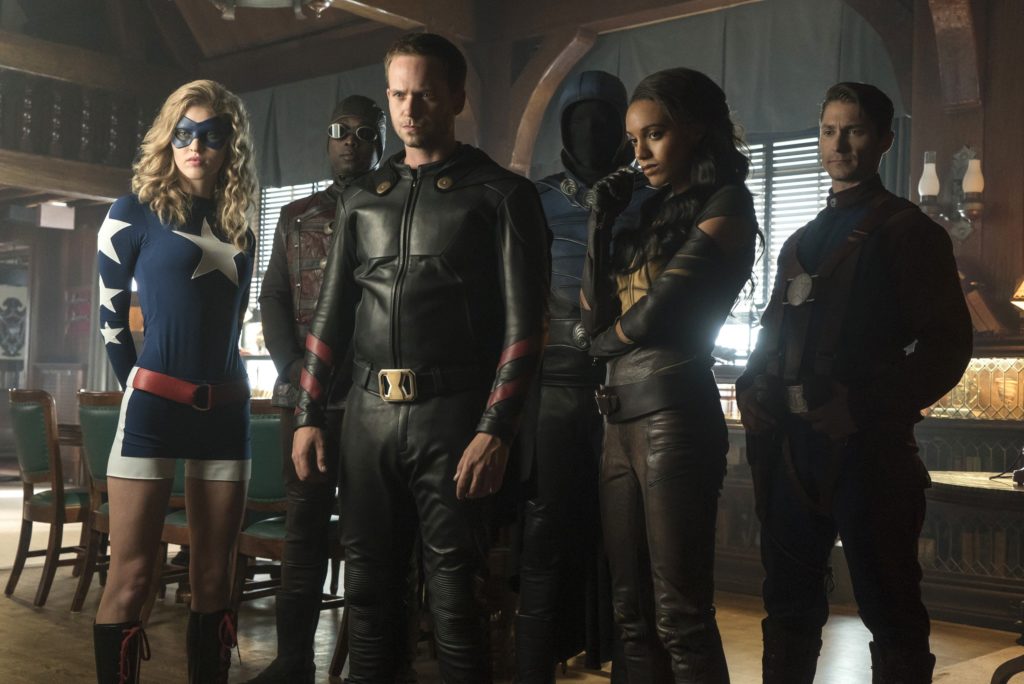 Compared to the Legends, the JSA is like an all-star team, working with one another toward a common goal. Meanwhile, the Legends can’t decide when or when not to fight in any given situation. Ray doesn’t fight with the rest of his team when the JSA shows up but he has no problem blowing their cover in front of a bunch of fully-armed Nazis. Stein gladly takes up the role of leader because it’s the 1940’s and he is tickled to feel superior. Nate doesn’t think to warn anyone about his hemophilia, even though it could kill him. No wonder Rip left you goofs. (I’m kidding, they’re better off.)

The JSA is on a mission: stop Krieger and the Nazis from winning WWII.

The Legends are intent on helping them with that goal and do so by making Stein sing and then ruining the Nazi party time. Eventually, the bickering leads to Krieger becoming superhuman, a ridiculous-looking beast of a man who stomps through the forest after our heroes. (The fact that someone filmed, okay’d, and edited that chase scene into the episode has me believing that no one on the Legends team takes this show seriously. That’s probably for the best for a show like Legends.)

I’ve had Sara pegged as the leader since about halfway through last year. She can be reckless and has sex with everyone (one of the many things I love about her), but when the job needs to get done, she’s there. She’s the first one willing to sacrifice her own life but she’ll be damned if any of her teammates get left behind. And besides, she did the voice-over this week, so that kind of clued us all into what was happening.

Also, Sara is the best wingman on the team. Not only is she forming a cute brother/sister bond with Jax, but she never lets her teammates be embarrassed. For instance:

Nazi: “Lorenz is said to be over six-feet-tall.”
*Sara crouches*

Bonus, she has no chill:

With the Waverider and its Legends leaving 1942, one might imagine that we’ve seen the last of the JSA. However, Vixen has already been confirmed to be a major player this season on Legends, so I have no doubt that she finds the team and asks for their help to get revenge on whoever killed Hourman. Of all the members of the JSA, she seems most likely to join up.

Timelines are so confusing

Between Barry screwing things up in Flashpoint and now Reverse-Flash screwing things up in Legends, I think the Speedforce needs to get its speedsters in check. I cannot keep track of all the different changes in time and what it all matters anymore. Intellectually speaking, if I try too hard to grasp the events in Legends, I’ll lose my mind. Eobard Thawne is controlled by timeline anymore because technically, he doesn’t exist. Barry made him exist. That, of course, makes him the most dangerous villain in the Arrowverse right now. Him taking out Hourman took a matter of seconds and I have no doubt that right now if he were to fight the Legends, they would lose.

The thing that confuses me the most about the timelines is that, since there are no more Time Lords, what’s to stop the team from say, returning to the same time over and over until they get their screw-up right? Like, if they say, “Okay, Ray, this time, maybe don’t punch a Nazi in the face and blow our cover” and redo the mission. Granted, that’s boring television, but it’s what my mind wonders in these situations. Do they leave a “what if” in the past kind of like Flashpoint did? These are the questions.

Wait, there are people who didn’t know Victor Garber could sing? Have none of your monsters seen Annie? HAVE NONE OF YOU SEEN CINDERELLA WITH BRANDY?!

Hourman not only called Sara “Ma’am” but shushed her to the side in favor of Stein? He’s lucky she’s kind of patient these days, otherwise she would have beat Reverse-Flash to the punch.

Jax and Sara are my favorites because they’re always trying to get laid. Gotta love that determination to romance women in different eras. Also, it’s nice that it’s not the charismatic white dude who is schmoozing with all the females. Kudos, Legends. I love a good smutty character.

Reverse-Flash is infinitely better than Savage, even after only two episodes.

Legends of Tomorrow airs Thursdays on The CW at 9pm EST.