This week on Legends of Tomorrow: Legends travel to Civil War era; zombies appear; Ray and Mick totally love each other.

Legends of Tomorrow has officially stopped trying to fit itself into the Arrowverse. Season two has been a thing of campy beauty: ninjas, nazis, and now to complete the holy trinity of WTFuckery, zombies. “Abominations” finds our heroes–Oh, sorry, I can’t call them that–Legends smack dab in the Civil War because of some future space pirate who brought the zombie virus to the 19th century.

Instead of doing things the “Rip” way, Captain Sara opted to stick with their bad situation and find a way through it. It created a much more compelling narrative and shined and much needed light on characters who were neglected last year, like Jax and Mick. And thank goodness we don’t have to deal with the Hawks or stupid Savage anymore. Season two is miles better than season one.

The Legends split up into groups, each with a job to do. Sara and Nate make their way to General Grant’s encampment to warn him about the zombies that they may or may not have pissed off earlier in the day. Nate politely tells Sara that she should let him do the talking and they share a moment that actually hurts me to quote: 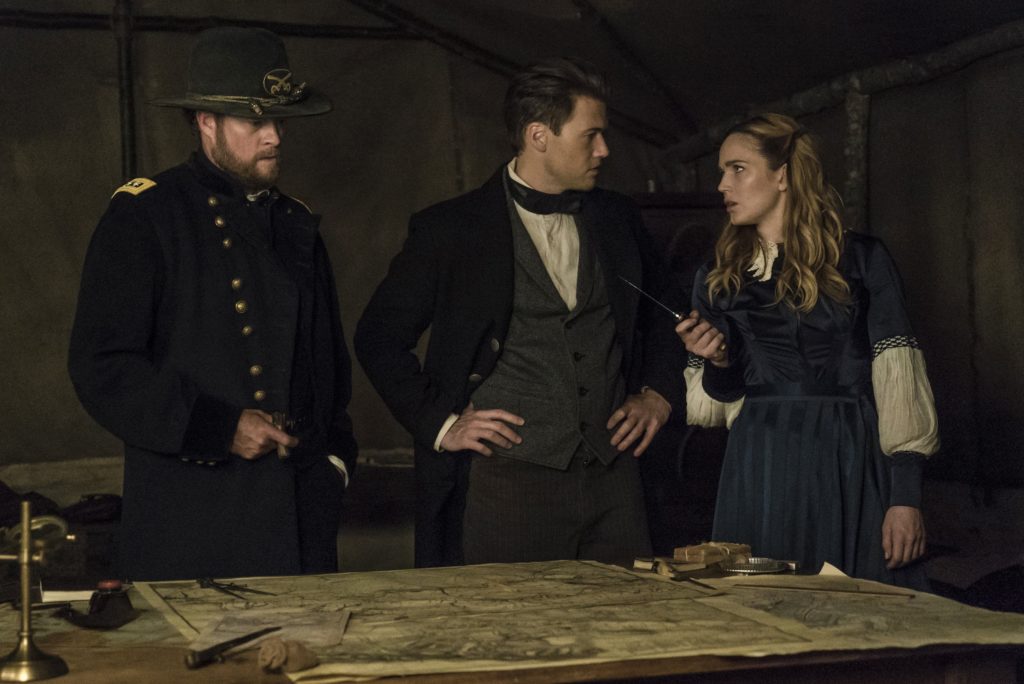 Of course, once they’re in the company of General Grant, Nate goes full doofus and claims he is “Colonel Sanders,” an error that Sara then has to fix by slamming a zombie head on the General’s desk. How do y’all not like Sara? Seriously. Even when she’s “not supposed to be a leader” she still finds ways to take charge and correct the issues her colleagues make. And you know what? She doesn’t degrade her team, either. She’s the one who takes on the burden when someone gets hurt; she carries with her the knowledge that any time shit hits the fan, she will be the one to make the ultimate sacrifice first. Sara spends her time making the hard decisions and living with those choices. But in the same breath, she’s constantly propping up her teammates so they can be better. She doesn’t lecture about how they screwed everything up because she knows if they make mistakes, that’s on her as a leader. I love her. I also love her off-handed comment to General Grant about Nate:

Sara: “And if I’m not back for any reason, feel free to shoot him.”

After using up most of the General’s ammunition to fight off the attacking zombies, Sara and Nate get an idea of Jurassic proportions. Nate attracts the zombies with a flare and then blows them all to pieces with some extra nitroglycerin. He goes “Steel” just in time and Sara is grateful she didn’t sacrifice a member of her team, even one as grating as Nate.

Of all the characters who have improved in season two, Jax has improved the most. No longer is the actor relegated to just squinting his eyes to make his monologues seem more emotional. He has actual story lines, a full range of emotions. When Stein suggests he stay behind because of current political issues in 1863, Jax responds:

Jax: “Okay, I get this might be difficult for you to understand, but I’ve been black my entire life, Gray. I can’t imagine a time period we could go to where I wouldn’t face some sort of racism.”

Jax has this amazing heart and even though he “took care of the confederates” by blowing them up and making even more zombies, he has the best intentions. He desperately wants to do right by the timeline, even if it means watching his people suffer. After unwittingly causing a ripple in the timeline by getting Henry Scott killed, Jax makes it his responsibility to carry out Henry’s mission. 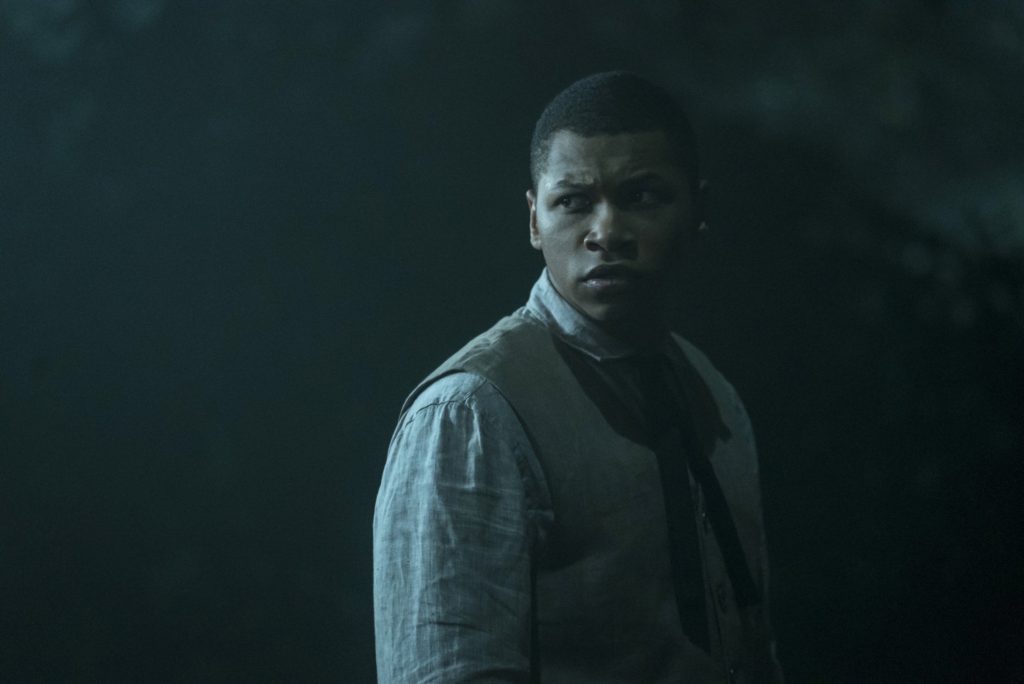 Jax and Amaya dress up as slaves to steal the information General Grant needs to win the war, but things aren’t as easy as Jax thought they might be. He thought they could slip in, unnoticed, steal the plans, and slip out. The reality of the situation isn’t that it’s hard for him to get the job done, that would be fine, but the difficulty is that it’s hard for both him and Amaya to watch how the slaves are treated and stay true to their mission. Eventually, Jax breaks and he can’t stick just to the mission and let people, his people, die. Jax and Amaya come out as heroes and Jax does right by Scott’s memory, but I can’t help but wonder if Jax feels some grief knowing that racism will still be a struggle 150 years from that point.

As a white person, I don’t know that I can comment on whether or not this story line was successful. From my point of view, it worked well, and I’m grateful we were given a Jax story line where he was more than just comedic relief. His relationship with Stein is really growing on me and I loved the line from Stein:

Stein: “You’ve just witnessed the very worst of humanity. We share a psychic connection and I still cannot even begin to fathom what you must be feeling. It must be like your heart is broken.”

Ray and Mick (And Stein, I guess)

I play a ton of zombie games and one of the first things those games teach you the hard way is that, meleeing zombies is never a smart idea. Now, I don’t expect Mick to realize the correlations to video games, however, he has the most OP zombie-killing weapon on the show–a fucking flamethrower–and he opts to stupidly use his fists.

Naturally, he got bit and he turns into a zombie.

Mick is scared by the idea of transforming into a zombie and the CW, which has given me SO MANY HAPPY THOUGHTS from Supergirl, now adds more gay on Legends in the form of Ray and Mick. (Is there a ship name for this, yet?)

Not only did Mick take a break from calling him “Haircut” (to show how serious he was), but they ADORABLY held onto each other during the process. Of course, Ray’s vaccine only exacerbates the issue and he has to turn it into a liquid to spray with a fire extinguisher, blah blah science-y stuff my simple mind will never grasp.

Once Mick is returned to his human form, he and Ray share yet another moment when Ray brings him food, sans vegetables. Mick, of all people, recognizes the position Ray is in. He lost his sense of “hero” the moment Snart died and so he hopes to help the both of them by sharing Snart’s Cold gun and gaining a new partner. Sometimes, Legends can be unbelievably sweet.

As annoyed as I get by Ray at times, it’s really hard not to root for him. He’s hurting but he embraces every role thrown at him with a giant smile. Even though he can’t be the Atom, he puts his soul into being the Team Mom by watching over everyone and packing lunches.

Please don’t make Nate/Sara a thing. I actually am really enjoying the swashbuckling, ass-kicking, suave womanizing nature of Captain Sara. It’s so refreshing to watch a female character unabashedly have sex “like a man.” And I shouldn’t even say “like a man” because she still gets at least kind emotionally invested in those she romances.

Stein still irks the piss out of me but out respect for Victor Garber and his character’s lovely relationship with Jax, I put up with his nonsense.

Legends of Tomorrow airs Thursdays on The CW at 8pm EST.