‘Kingsglaive: Final Fantasy XV’ Filmmaker and Director Talk About the Film and the Father/Son Dynamic

There are few games as anticipated as Final Fantasy XV. It’s been in development for over ten years now and FF fans like Bilal are champing at the bit to get their hands on what is thought to be the most beautiful and innovative entry into the series. Kingsglaive is a movie that serves as a precursor to the game itself, acting as a two-hour prologue to the events of the game. It’s a stunning look at how far technology has come in the animated industry and if you watch it for no other reason, it’s realism and action sequences are sure to impress.

Kingsglaive is out in select theaters around the country, but more importantly, it’s out now digitally. (Blu-ray releases October 4th.)

We had the opportunity to sit down with filmmaker Takeshi Nozue and lead writer and localization director Dan Inoueto (who translated for Takeshi) to talk about the process behind Kingsglaive, as well as discuss some of the more spoiler-y aspects of the film. (Spoilers are marked in red further down the page.)

SYNOPSIS: Lucis is home to the sacred Crystal, and the menacing empire of Niflheim is determined to steal it. King Regis of Lucis (Sean Bean) commands an elite force of soldiers called the Kingsglaive. Wielding their king’s magic, Nyx (Aaron Paul) and his fellow soldiers fight to protect Lucis. As the overwhelming military might of the empire bears down, King Regis is faced with an impossible ultimatum – to marry his son, Prince Noctis to Princess Lunafreya of Tenebrae (Lena Headey), captive of Niflheim, and surrender his lands to the empire’s rule. Although the king concedes, it becomes clear that the empire will stop at nothing to achieve their devious goals, with only the Kingsglaive standing between them and world domination.

When Versus 13 moved console generations to the PS4, it was decided that it should do so as FFXV, and then it was conceived to tell this story in this way. Over the console generation, we’ve seen fewer players interested in Final Fantasy as a series, so the idea of the film was to reach more people, a wider audience who may want to know about the world of FFXV.

Kingsglaive joins Brotherhood and A King’s Tale as story-building elements around the game of Final Fantasy XV. How were designs, story decisions, and character arcs decided and shared across the FFXV collection of stories?

Takeshi, you previously worked on Final Fantasy: Advent Children. How has the landscape of digital animated films changed in his experience while working on Kingsglaive? Was there anything he learned or took from the feedback from FF:AC into KG:FFXV?

When he worked on Advent Children, he was in the Digital Works Department of the company. For Kingsglaive, Takeshi and his team moved to the Business Division. The most striking difference you’ll see is the realism in Kingsglaive. The technology has improved exponentially over the years and the element you’ll notice this the best is in the facial expressions, helping to make the characters more rich and real than ever before. The bigger difference in terms of storytelling is that, in Advent Children is set specifically within that Final Fantasy 7 story, whereas Kingsglaive has a broader audience in mind, meant to appeal to those who may just have a curiosity about FFXV.

The announcement of Kingsglaive was a surprise to many during the Final Fantasy XV Uncovered event. How were you able to keep it a secret for so long?

Well, we weren’t even sure how we were able to keep it a secret. We did say that, in the past, we thought we may have been too quick to say anything but personally, he didn’t want to bring it out until it was ready. It worked out that we were able to do it as we were.

These next questions contain spoilers for some of the events that occur in Kingsglaive: Final Fantasy XV. Please continue with caution. 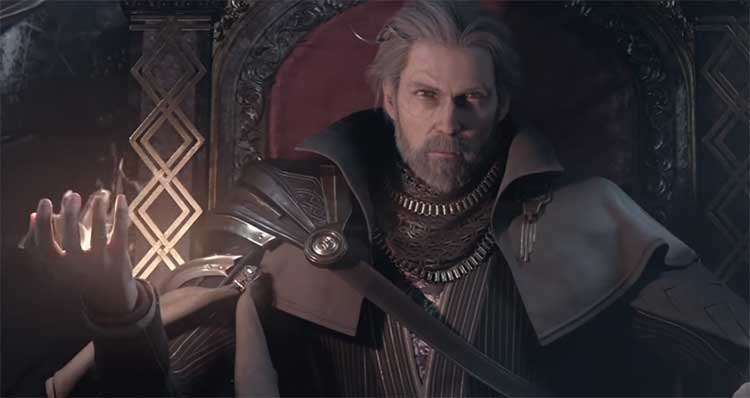 Kingsglaive packs a ton of story, background, and world building into a two hour movie. Why was this story so important to tell before FFXV’s release?

One of the other driving factors was that we really wanted to show this theme of father and son and then have the game transition into an open world game. It was kind of difficult to tell that story just within the game, so another medium was conducive to telling the story we wanted to tell about the father and the son.

So you mention this father and son dynamic, but we never actually see Regis and Noctis together throughout the film. Does this father/son relationship then show itself more in the relationship between Nyx and Regis, since Nyx is ultimately loyal first to this king who has so earned his trust?

Well, it’s kind of more a parent and child dynamic. Nyx simply shows the parental side of King Regis. Kingsglaive is telling the father’s side of the story whereas the game, FFXV is telling the son’s side of things. There’s a lot of depth to Regis and the decisions he makes so that’s ultimately what the film focuses on. It’s a half of a whole.

Why tell this story through Nyx’s eyes and not someone in FFXV?

One of the key things we wanted for Kingsglaive was for the film to be approachable. Character-wise, we wanted something open to a wider audience and Nyx is someone who can interest those who might not be inclined to check out something in the Final Fantasy universe. He has a broader appeal so that was why we chose him.

The fashion and costumes in this movie are absolutely top-notch, with even minute details in the Glaive’s uniforms to set them apart. Was this design something you had control over for the film?

We didn’t want to make the Glaive uniforms too “modern military” as that wouldn’t feel like it would work in a Final Fantasy world. At the same time, we didn’t want it to be too Final Fantasy that it would alienate viewers. We researched different traditions that would give it the appeal of both modern and original, while still relating to a magic-using society.

With the game already criticized for not having playable female characters, what went into the thought process behind killing Crowe early in the film?

It really is about the narrative of the film. I don’t think you can really tie it into the game side of things in terms of female characters and their treatment. The major plot point that we wanted was to focus on Nyx’s emotional landscape, so it’s told through Nyx and Libertus, intended to drive a wedge between them to show their internal turmoil. The death of Crowe was something we felt would be the effective activator of that.

Did you bring in Sean Bean as King Regis just so you could kill him, keeping his death streak in movies and TV alive?

Sean is great and so regal. He really was best for the character and he just happened to die.

Final Fantasy XV is set to release November 29th, 2016 on PS4 and Xbox One. Kingsglaive is available now digitally.

Previous article
In Preparation for the ‘Dead of Summer’ Season Finale: A List of Questions
Next article
Gamescast Episode 39: Summer Video Games