Dutch and Aneela Team Up in the ‘Killjoys’ Season 3 Finale

In the season 3 finale of Killjoys, war has come to the Quad but there is a much stronger and more sinister enemy awaiting them, the lady in the green.

As Aneela’s armada enters the J, D’Avin’s group has an ace up their sleeve in the form of Johnny’s sonic pulse emitter. The chief nerd has been able to create a device that scrambles all of the Hullen technology and modified their own Black Root ships so that their systems aren’t affected. But they need the Hullen to enter the kill zone in order for their forces to be disarmed. While that is happening, Dutch, John, and D’Av go on board the main Hullen ship to confront Aneela. They have Khlyen’s cube on board Lucy and plan to trap the Commander in there. 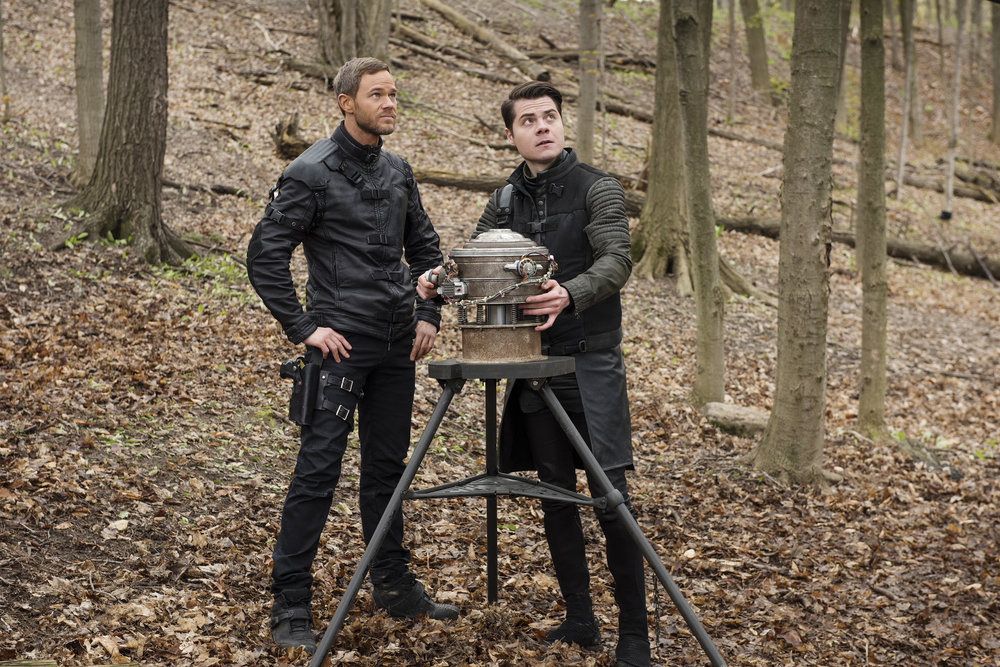 The sonic is being guarded on Leith by Pree and the Ferans while air support is manned within the RAC with Fancy and his cleansed ones piloting the modified Hullen ships. Things go haywire though as of course Delle Seyah reveals that she was there on purpose. As Dutch confronts her after discovering Alvis’s death at Aneela’s hands, Hullen minions appear and restrain her. They had been hiding inside Seyah Kendry’s ship though how they were able to hid their life signatures is unknown. They infiltrate the RAC and rescue Delle Seyah as well as take Dutch to their commander.

Aneela in the meantime had boarded Lucy (dressed up as Dutch) and finds Johnny. At first they are just chatting amiably but the younger Jaqobis brother soon realizes that she’s not his best friend and greets the Hullen leader. They scuffle but she’s stronger and manages to stab him with the lung with a Dreadnought. Lucy then contacts D’Av who’s still inside the RAC war room to inform him of John’s current state. Turin appears saying that he’ll take over while Jaqobis sees to his brother. D’Av reluctantly leaves with Zeph and the senior RAC office takes over general duties and coordinates the defense of the Quad.

The Hullen forces land on Leith for a ground assault, forcing Pree to shut down the sonic to get to safety. Meanwhile in space, Fancy and his cleansed are getting their asses kicked now that the Black Root ships are back in commission. Many of his people perish and we’re not sure how many survive. Mr. Lee himself is sent down to Leith to retrieve Pree and the sonic as the extraction group. The RAC gets overrun and Turin tells everyone to evacuate. He ends up getting caught and falls into Gander’s hands. But just as he’s about to undergo the green plasma treatment, Fancy shows up and saves his ass. You’re welcome. 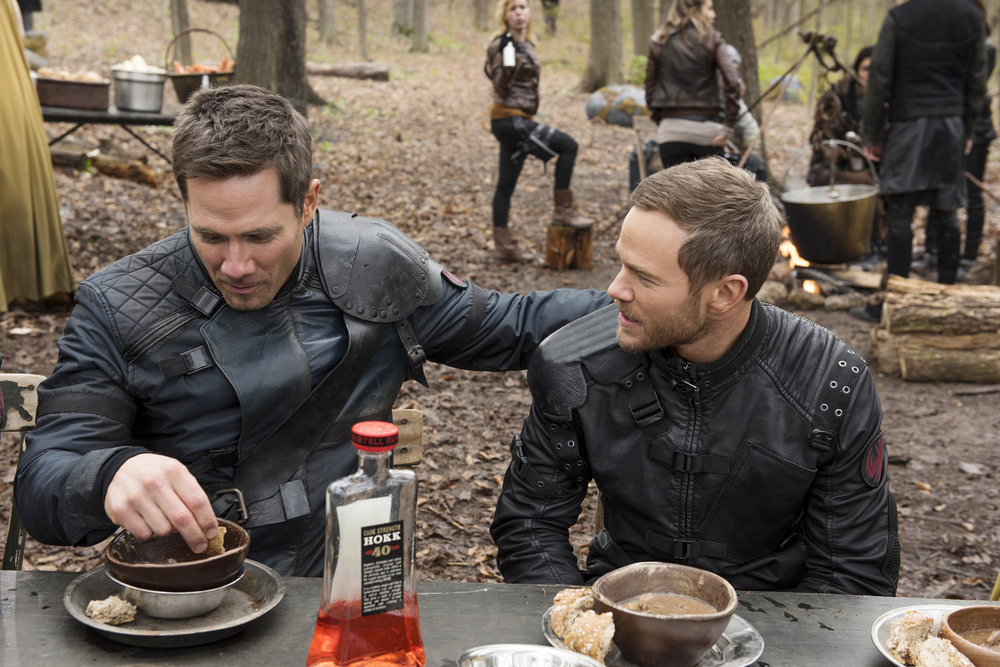 Meanwhile, the John gets patched up by Zeph and even though he’s still injured and not at 100% he tells his brother that they need to get on the armada to find Dutch. Once they are on board though Delle Seyah and her goons surround them and they find out that their leader is not actually in the vicinity. Looks like Aneela wanted some alone time and the two women are actually at the Necropolis. John then bluffs his way into making Delle Seyah take them to the Necropolis by convincing her that if Dutch dies so does Aneela because the Killjoy came from her. They also manage to get her to stop attacking the Quad while they save their ladyloves from both dying.

At the Necropolis, Dutch and Aneela get to the fighting because duh there’s been so much build up to their eventual showdown. The Killjoy though has a secret weapon and stabs the commander with a ring device that Zeph created for her. Inside were all of Dutch’s memories because if she was going to die, she wants the other woman to know what her life was like. But unexpectedly this act allows Aneela to remember that she had been the one to bring the other woman out of the green. She explains that she was lonely that’s why she did it. Aneela had wanted to watch Dutch’s life with Khlyen and that she thought the other would be her chance for happy memories. Except of course that Khlyen ended up loving her more which is why Aneela grew to despise her, that and because her father hid Dutch away as if she would break her. But we learn that Khlyen was protecting both of them from the lady in the green. He took his daughter’s memory of bringing young Yalena (named after Aneela’s mother) out because this ancient Hullen entity wants freedom from the plasma herself. Once Dutch had gone out the lady felt it. The two women come to an agreement that they would both go back into the green to kill the entity once and for all (though Aneela said she wanted to close the door).

Just as they are vanishing into the liquid, D’Av, John, and Delle Seyah arrive. Dutch apologies to her boys before disappearing and while D’Av tries to touch the green himself, weird Hullen spiders form and begin to attack. Seyah Kendry orders her two guards to cover them while they get back on the lift. To make matters worse, Black Root ships loyal to the lady have arrived and are inside the Necropolis’s docking station. In order to protect both Aneela and Dutch, Johnny has Lucy sever the cables for the lift so that the Necropolis is no longer accessible. As the three float aimless in space (where hopefully Lucy will be able to pick them up), D’Av and Delle Seyah talk parenting. He suggests the name Michelle (after show creator Michelle Lovretta perhaps??), it’s bossy but it means well. 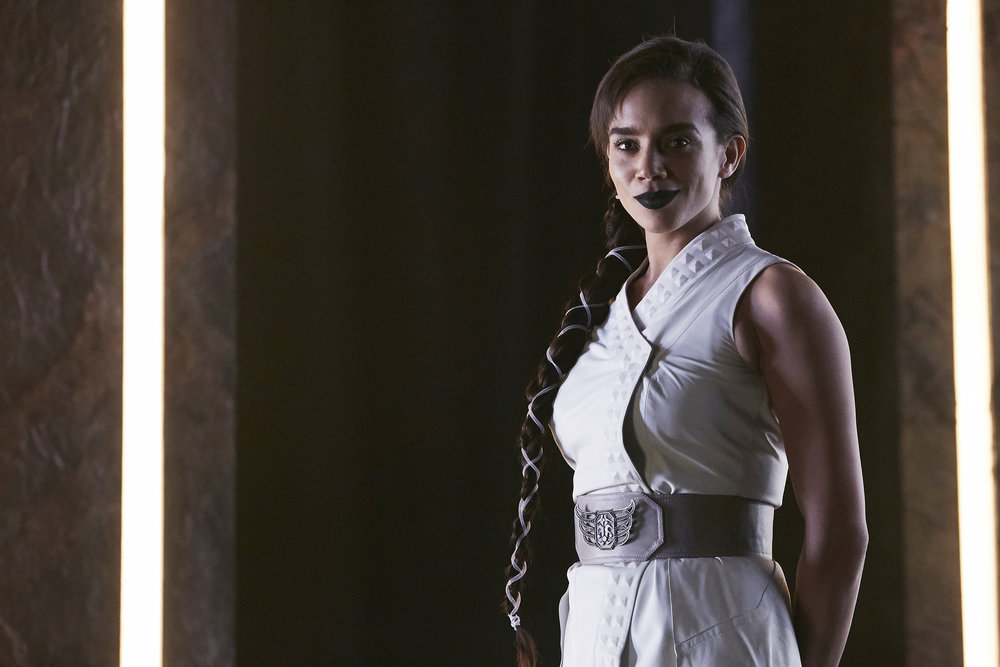 Inside the green, we see a familiar beach and both women have become blonde. Aneela explains that this is the green space, the place in between all the memories we store. Interestingly enough, Dutch is wearing white while the other woman is in all black. The commander adds that this is where Yala was born. When Dutch asks how they will find the lady, a familiar voice answers and its young Khlyen! Aneela holds her back though, explaining that it might not be their father but Dutch confirms that it is. When Aneela asks how does she know, Dutch hands Khlyen the Dreadnought and he answers that its because he made them these while pulling the deadly object into two identical blades. He hands one to each daughter and the three go hunting.

So there we have it, the end of season three and what a roller coaster it was. The expanding world was well done as each subsequent end of a season heralds the coming of an even bigger villain. In season 1 it was Khlyen and Red 17, then in season 2 it was the discovery of Dutch doppelganger Aneela, and now it’s the lady in the green. Speaking of which, Aneela as a character was developed quite splendidly so that audiences empathized with her as since her madness was not her fault. She endured countless horrors with the Hullen but she did inflict them as well. Getting to know her and discovering Dutch’s origins this season greatly expanded the Killjoys universe giving audiences a rich backstory of the Quad and its many inhabitants. I also loved how we found out more about Pree’s warlord history, witnessed Fancy’s and Turin’s conflicts and emotional turmoil, and Delle Seyah’s unexpected life as a Hullen. We also got to meet the Hackmods more extensively, though I did wish that we saw the Factory where they had been modified. Perhaps in season 4? Speaking of which, thank goodness Syfy renewed the show for 2 seasons because I need to meet this mysterious evil lady, see the doppelgängers kick ass, and of course meet D’Av and Aneela’s spawn (I hope it’s a girl!). 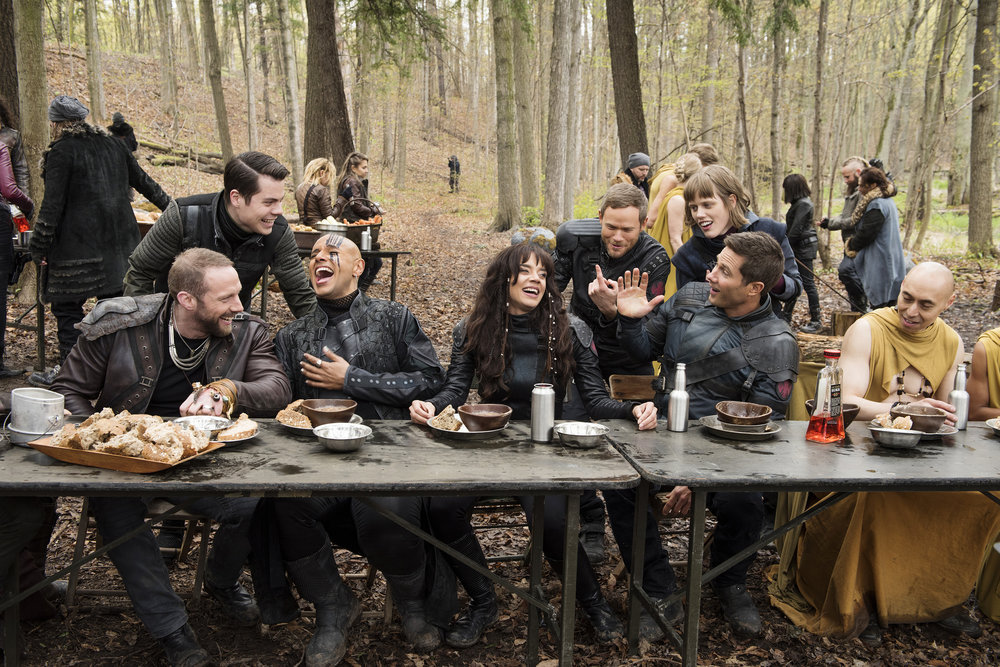 Till season 4 folks! The hiatus begins.