In this week’s episode of Killjoys, Team Awesome Force heads to Leith on a mission to electronically infiltrate The Lady’s armada. 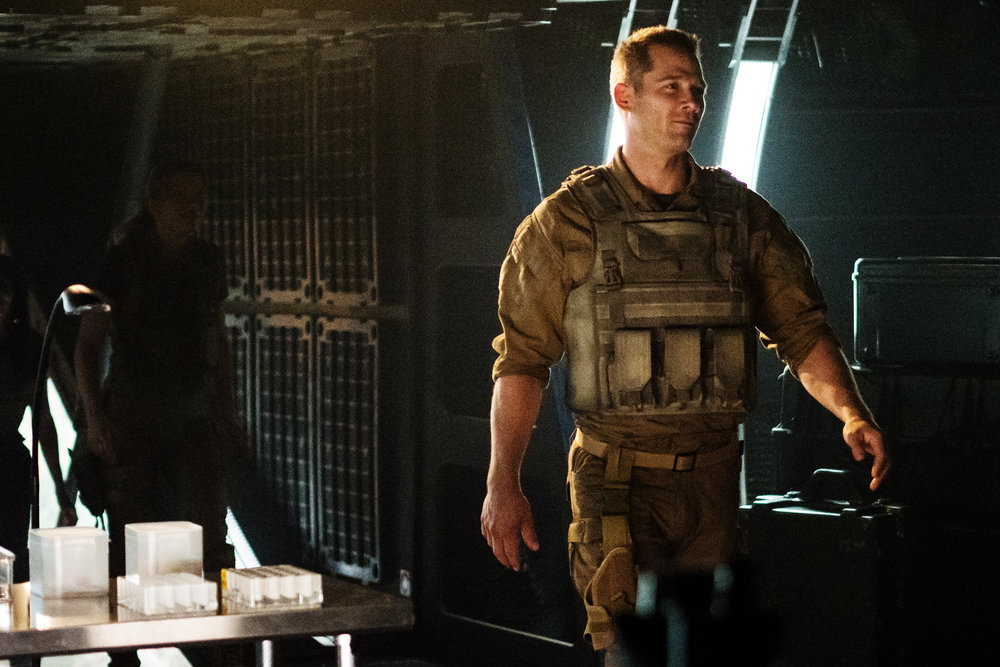 On the Herks Supermax, Johnny explains that before Lucy was erased she told him that the hatchling was in fact a clone of The Lady. He shows Dutch and his brother a digital image of what the full baby alien would look like and it has a lot of legs. It gets a lot worse however because a mature alien would be huge. Still, the spidery creatures can’t survive in their atmosphere hence the terraforming and Hullen-human body hybrids. The team needs to find The Lady’s original body and determine that it’s likely somewhere close to her that is well protected. It’s obviously on the Hullen armada. Dutch tasks Johnny with figuring out how they can digitally map the ship in order to find out the body’s location. The Killjoy makes his way to the warden (who is at the workout room) and explains to her his plan of bouncing a low level wireless signal through the armada in order to build a 3D holomap and then beam it back to them. Apparently because Team Awesome Force’s ship is still within the Hullen stronghold, it will act as a receiver that Nucy will get beamed to with instructions. The warden asks him if he needs her system but Johnny explains that would be too risky. However there is a satellite strong enough to do so, only it’s on a military base on Leith. He asks for an escape pod, her undying support, and a few prisoners. They end up picking Calvert because she had apparently been in the Leithian military and was the best candidate on short notice.

Team Awesome Force + Calvert head down to Leith on a mission to infiltrate the base. The base turns out to be underfunded and promotes military entertainment tourism as a source of revenue. They try to blend in with Johnny and Calvert heading down to the restricted section to access the satellite while D’av and Dutch watch their exit above. D and D soon find themselves the center of attention though as members of the military are expected to do some kind of presentation to the crowd. The two improvise terribly.

Meanwhile downstairs, Calvert is able to distract a soldier into thinking she was a ranking officer in order to buy them another twenty minutes or so. She and Johnny make their way to the satellite room where he sends the signal to the armada. Calvert tells the Killjoy that she knows something bigger is going on that he’s not telling her or the other prisoners. At the moment he says that this is a need to know only but to trust that they are the good guys here. It appears to work as Lucy’s systems on the armada hanger come to life.

Upstairs, Dutch and D’av are caught by the real members of the Leithian military and when Johnny tries to intervene, he is apprehended too with Calvert nowhere to be found. Team Awesome Force is held in an interrogation room with an officer informing them that he’s going to get a retinal scanner to ID them himself. Before said officer entered however, Johnny is able to grab a hidden blade in Dutch’s boot to in order to slice his bonds. Once the trio are alone again he is able to break free and gives Dutch and D’av the blade while he goes off to find Calvert because if the prisoner gets caught it exposes all of them. He manages to find her and the two have a small skirmish but she explains that she has a daughter that she’s trying to get back to whom she hasn’t seen for eight years. Johnny ends up revealing what’s really going on and that he can’t let her go home yet. If she gets identified that means The Lady will know that the supermax survived and his team will be in jeopardy and none of them will have a home left to go to. Westerley is just the beginning and The Lady will go after Leith next.  However, he asks for just two more weeks and he’ll personally bring her back himself and tell her daughter that her mom helped save the world.

D’av and Dutch aren’t so successful in trying to break their bonds but have a heart to heart. He states that he knows about Johnny’s sabbatical and asks her if she would like him to stay even though his brother will be gone. Dutch asks him if he wants to stay but before he can answer that Johnny and Calvert arrive to free them. 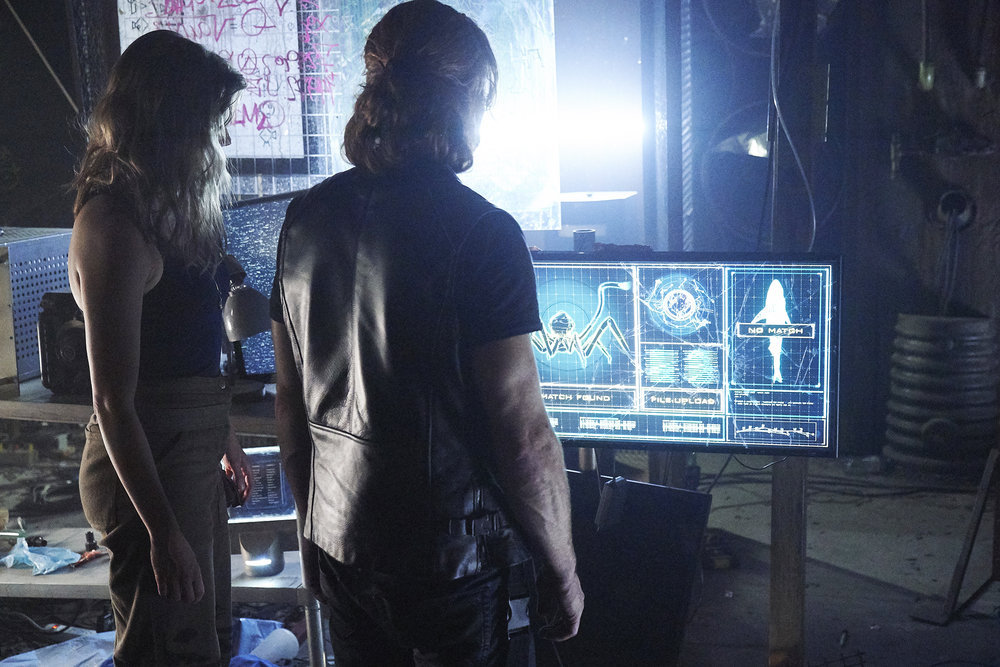 Back To Old Town

Meanwhile on Westerley, Pree, Zeph, and Turin make it out of Old Town into the badlands to a safe house. Zeph is feeling very unsure of herself after her last plan got Fancy abducted. When the ranking RAC officer finally arrives, he explains he almost got caught at a factory but it was worth it because he brought back a live hatchling for Zeph to analyze. She has them hold onto the box while she burns a hole through it to drop a surgical camera and then Turin has to seal up the opening. Once this task is complete, the trio look at Zeph’s tablet but are unable to determine what they’re actually looking at when the camera feed abruptly ends after the creature presumably eats it. The scientist though is able to grab one frame that shows the shape of the alien baby. She realizes that she’s seen it before but can’t remember where. Perhaps it was from old Company records or RAC research files but she’ll need a hacked direct line to be able to search through those because The Lady’s blocked everything in the area to preserve the illusion. They’ll need to go back to Old Town to her lab.

When they arrive the place is nearly deserted except for kill squads out to get them. Pree goes off in search of Gared while Turin and Zeph head to her hideout. The warlord does find his partner but then realizes that the other man is either awake or a mole because the real Gared wouldn’t remember that Zeph and Turin are even Killjoys. The two then have a disagreement because Gared gets upset that Pree didn’t trust him in the first place. Pree in return argued that he was just trying to protect him because their relationship is the best thing he will ever get and he can’t lose it. Eventually the two make up and get a move on. Back at the lab, Zeph is running a search to see if there’s a match with any record for the hatchling and we discover a bit more information about her background on Leith. She ran away from home, went to a scarback monastery to get an education, joined Killjoys and found a new family. Just as the system announces that there are no matches found, a kill squad good finds them and starts shooting. Zeph is able to grab Turin’s gun and fire a killing shot. Unfortunately the glass container breaks and the alien baby gets out. The two Killjoys end up making a run for it and manage to escape luckily. The elder Killjoy ends up sacrificing himself as a distraction by locking Zeph up so that once she gets out she can look for Pree. She does manage to escape, but is soon hunted by the kill squad as well. Just as she is cornered, Zeph clutches a small pendant and prays in fear but is thankfully rescued. Additionally she finally remembers where she seen the image of the hatchling. 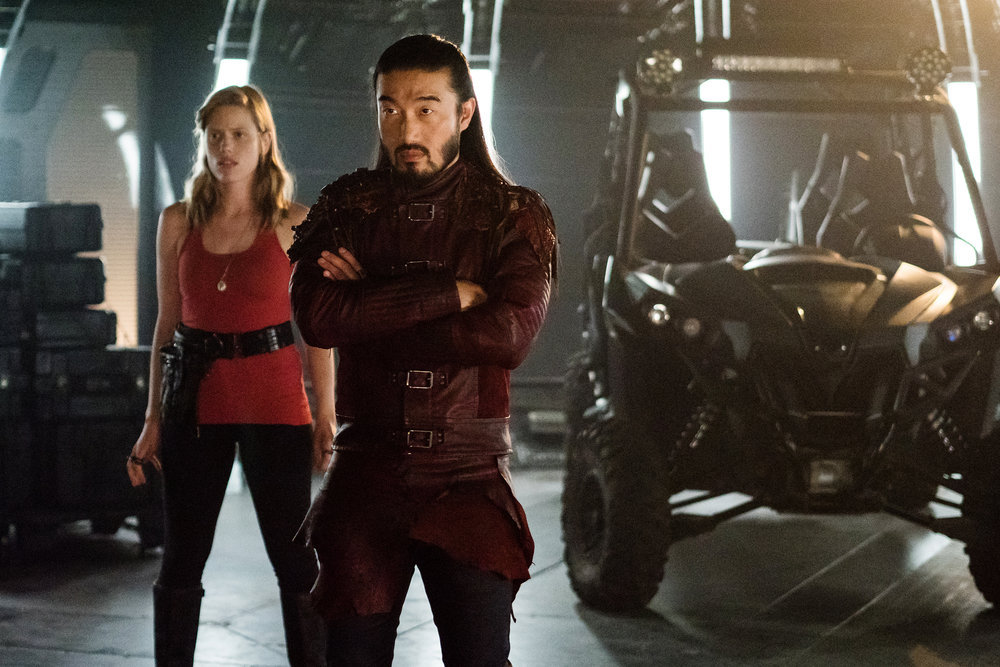 On the armada, Khlyen is pretty depressed with Dutch’s death with The Lady super annoyed at him. She informs him that she’s sped up her timetable so that everything on Westerley will be dead within eight days but that’s ok because he no longer cares about anything. FYI her body also isn’t doing so hot. Looks like humans are indeed to frail for her essence.

On a different part of the ship, Fancy is tied up having been tortured. Suddenly though a door opens with a soft electronic humming sound that seems to be leading him somewhere. The Killjoy is able to free himself and follows the sound. He comes across alien cocoons of sorts which could be larger hatchlings growing? But more importantly who has freed Fancy? Why it’s Lucy!! He also ends up saving Zeph in Old Town and they in turn fly to Leith to rescue Team Awesome Force. They arrive just in time as the trio plus Calvert are looking for their escape pod. D’av hugs Fancy and Zeph hugs Dutch. Meanwhile Johnny is freaking reunited with Lucy!!! Turns out when Nucy was uploaded she has a directive for Lucy to access any backups she had offline. She also tells him that Nucy is their baby. Awwwwwwww. Fancy is also able to tell them exactly where The Lady’s real body is on the armada and Zeph enters saying she knows who can tell them how to kill her. 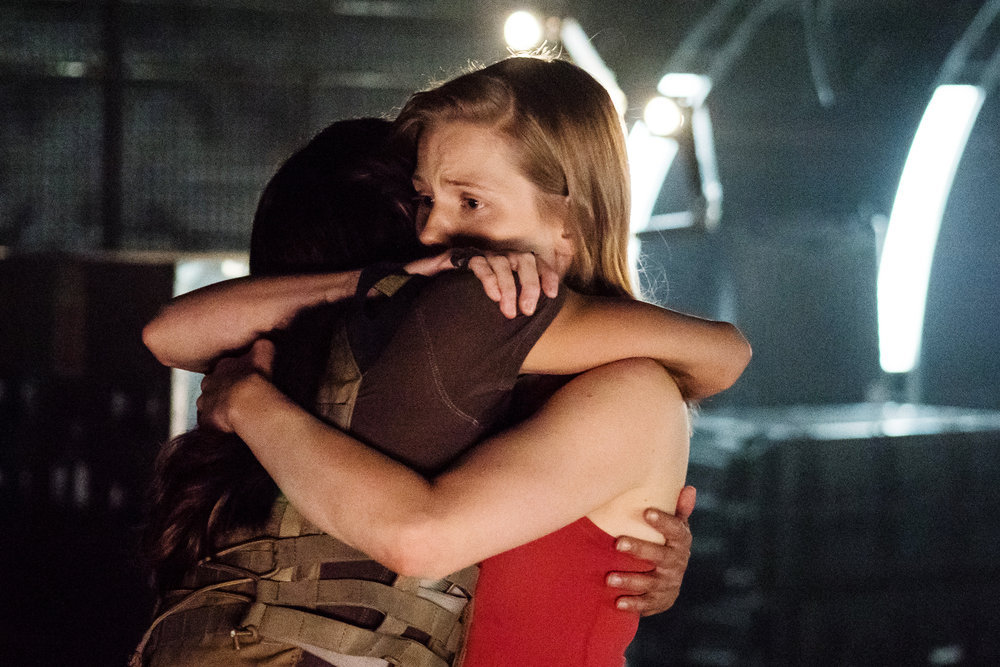 Previous article
‘Neon Genesis Evangelion’ on Netflix or: How I learned to Stop Human Instrumentality and Love Myself
Next article
Weekend Movie Brawls #10: Animation/Real Life Battle