This week’s episode of Killjoys brings us an epic prison tournament, Jaq and Delle Seyah try to find one of Khlyen’s cubes, and Khlyen looks for Pree in Old Town. 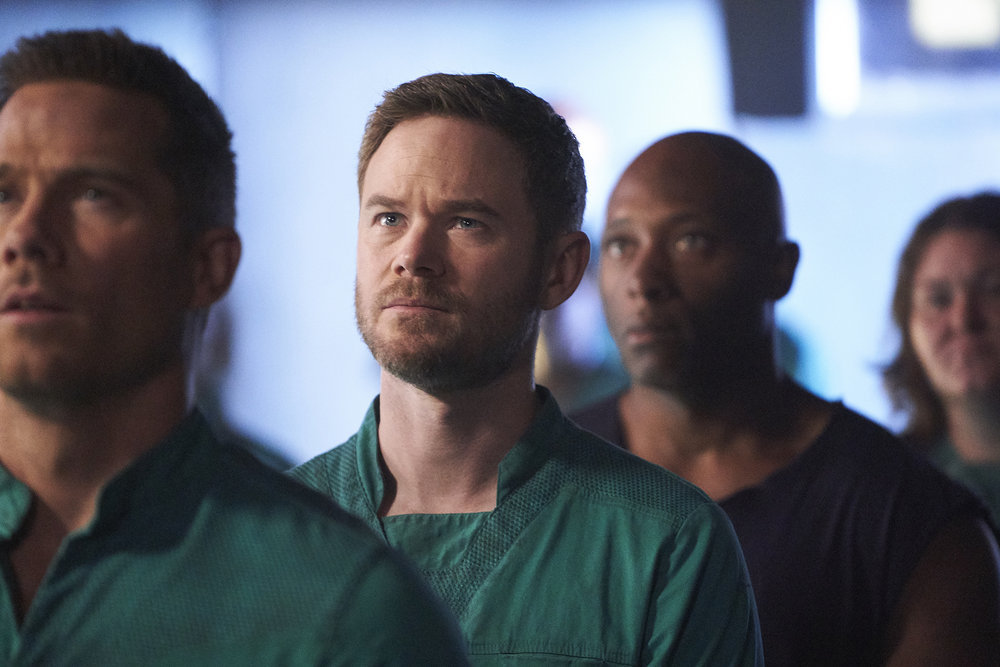 It’s fighting time at the Herks supermax as benefactors of the prison have arrived for this year’s Bellaxion, a tournament where prisoners are picked to duke it out and the winner will have a chance to battle the Qreshi champion. If he or she wins, they have a chance of freedom, but frankly that’s never happened before. D’avin is pretty confident that he’s going to get picked for the tournament by the Qreshi royal siblings but is actually rejected. Well that’s got to sting. Dutch thinks now is the perfect time for them to make a move with everyone focused on the tournament. They approach Sparlo to try get some help with man power but the criminal won’t have it. The man is currently embroiled in a turf war with Coren plus if the warden even gets a whiff of trouble their neck chips will get activated. Apparently the last time someone tried to remove it their head exploded.

When the trio visit the area that’s being set up for the fights, Johnny has Nucy scan the vicinity and she indicates that there is a single frequency jammer in the area. He then says that if he had one of the chips he can upload it to the mainframe and bypass all the encryption keys and use that to disable all the security fences of all chips. In addition he’s already got a plan on how he can get into the warden’s office to get into the mainframe the other two just need to figure out how to get into the tournament. Johnny’s plan is pretty suave, he has Nucy program a low level virus that he then uploads into the system. The warden then comes to him being that he is apparently the only hacker in the supermax who can get rid of it. At first on of the prison techs is trying to fix it but the Killjoy is able to use his superior intellect into bullying the other man into letting him use the console.

Meanwhile, D’av had been called by one of the Qreshi royals for a private meeting. Turns out she wants him to kill her brother because of a power struggle. She tells him that her sibling is actually the worse one and that he would let the entire prison starve if he had his way. Dutch in the meantime is able to get into the fight after showing of her skills in an impromptu bout against one of the contestants. The Qreshi male likes her style and puts her in. During her first round, she viciously bites her opponents neck in order to rip out his chip. The warden then has a chat with her and they come to an agreement, the Killjoy continues to fight so that the prison head can make the royals think twice before telling her how to run her own shop and in exchange Johnny is freed. The other woman warns the former assassin though not to try anything because she wouldn’t want an enemy. But of course this is exactly what happens as the warden finds out that Dutch had taken another prisoner’s chip and she is removed from competing while Johnny is put into solitary.

D’av and Dutch are forced to go to Sparlo and ask for his help. They reluctantly explain how John can control everyone’s chips and they have a way to do that but they need him. The criminal then agrees to help them out provided that his and his group’s chips are disabled. The Killjoys agree to the bargain. The elder Jaqobis brother is then goes back to the Qreshi sister and cuts a deal with her too, as long as she makes the warden put Dutch back into the tournament he will kill her brother for her.

The former assassin is allowed to compete again. Sparlo holds up his end of the agreement and is able to free Johnny from solitary. The two make their way to the warden’s office where the tech expert is told by the other man to disable his men’s chips first and to open the armory. Johnny says that will take too much time so he’ll just erase those them from the system. As he watches Dutch about to fight the Qreshi champion on screen, the tall man is suddenly shot in the head and the Killjoy knows something is wrong. At the fighting pit, Sparlo’s men take out the guards and the warden disables all the prisoners via their chips except of course that doesn’t work on the ones with the weapons. We discover that Sparlo’s double crossed Team Awesome Force by teaming up with Coren. In other parts of the supermax, Johnny comes across the warden who appears wounded. 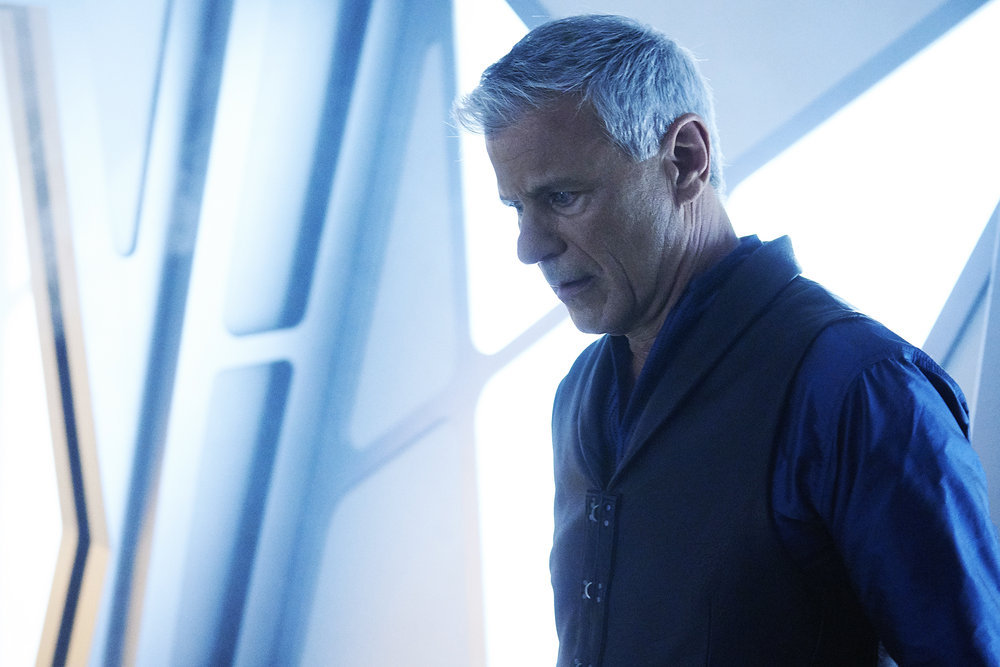 The Search For Pree

In Old Town, The Lady and two of her Hullen minions are on the ground with Khlyen who has identified Pree as having woken up and leading the rebellion. He asks her why she hasn’t put out a warrant on the man and she responds that it would alert his compatriots and drive them underground. She has the element of surprise and wants to keep it that way. Khlyen tells her then that they’ll find Pree at The Royale, since he is the true owner of the establishment and will eventually make his way back there. As they are waiting, he makes a drink and tells her to sip it. She unknowingly smiles and Khlyen comments that her body recognizes that the beverage was something made for Westerley children and it evoked comfort. Once she understood what it meant to love then she would understand humans.

Khlyen goes up to talk to the bartender asking if he’s seen Pree and the other man answers not for days but he should talk to the guy sitting by himself (Gared) who is his best friend. He heads to that direction but whispers to Gared that Pree is in trouble and to leave now while going over to another man who is also alone at another table. This poor soul is taken to be interrogated but clearly doesn’t know anything. The Lady soon figures out though that Khlyen is stalling and that he’d better find Pree or else Yala will burn along with everyone else. He is able to track Gared down after and says that the other man needs to wake up now. 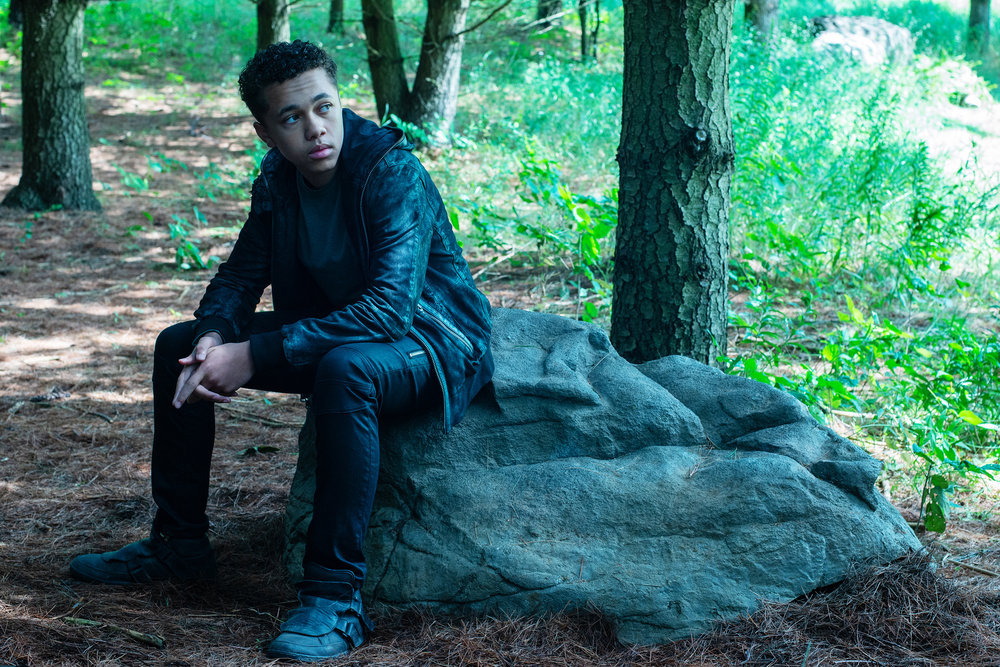 On a distant planet, Jaq and Delle Seyah are in a forest trying to find one of Khlyen’s elusive cubes. The young man won’t say why they need it for but there is clearly tension between the two. Jaq has been apparently getting visions but it doesn’t seem to work when he’s stressed out. Delle Seyah asks him to hold her hands, close his eyes, and just breathe. This works but instead he sees D’av, Dutch, and Johnny inside the supermax. Jaq freaks out saying that they need to go back to the Quad to help his dad but the older woman says they need to find the cube first. She says that they would be walking into a trap because using loved ones against their enemies is bad bitch 101 and she invented that move. Delle Seyah lays down some hard truths that they can’t always live the life they want in the middle of an apocalypse and that he was born to do a job because she hasn’t gone through all this crap protecting him for nothing. He looks back at her coldly and says that he wishes she was the one they lost in the green instead. Ouch.

Later on that night, Delle Seyah ends up dreaming with D’av reassuring her that she’s doing a good job with Jaq. The kid’s alive and he’s not broken, but she’s bruising him. The younger man isn’t cold like her but she counters maybe he needs to be to survive. Dream D’av counters her point that Jaq doesn’t need to be like her but he does need her. The Killjoy tells her that the kid has been trying to tell her something important all day and she needs to wake up. As soon as she does, Jaq is nowhere to be found and Delle Seyah tries to go after him. She is finally able to track him down and she tells him that he asked her what they were without Aneela and the truth was she didn’t plan for him. She was full, she was fine and now he’s here she’s still fine but she won’t be if anything ever happens to him. Delle Seyah says it’s because he is her son and she is his mother, losing Aneela doesn’t change any of that. He jokes a little that queens don’t cry, but she admits this one does now as she’s a teeny bit broken. She then gives him the choice of going after his dad if that’s what he wants to do. Jaq doesn’t answer though and looks off to the side and when she asks what he’s looking at it he responds with the cube. The former member of the Nine doesn’t see it though and so her son makes her hold out her hands, close her eyes, and take a deep breath. When she opens them the cube is suddenly visible. He then explains that this is why they need Dutch’s DNA but he makes her promise that they are still going to find D’av. Delle Seyah nods and Jaq puts the DNA swab onto the surface of the cube and out walks out Aneela!!! 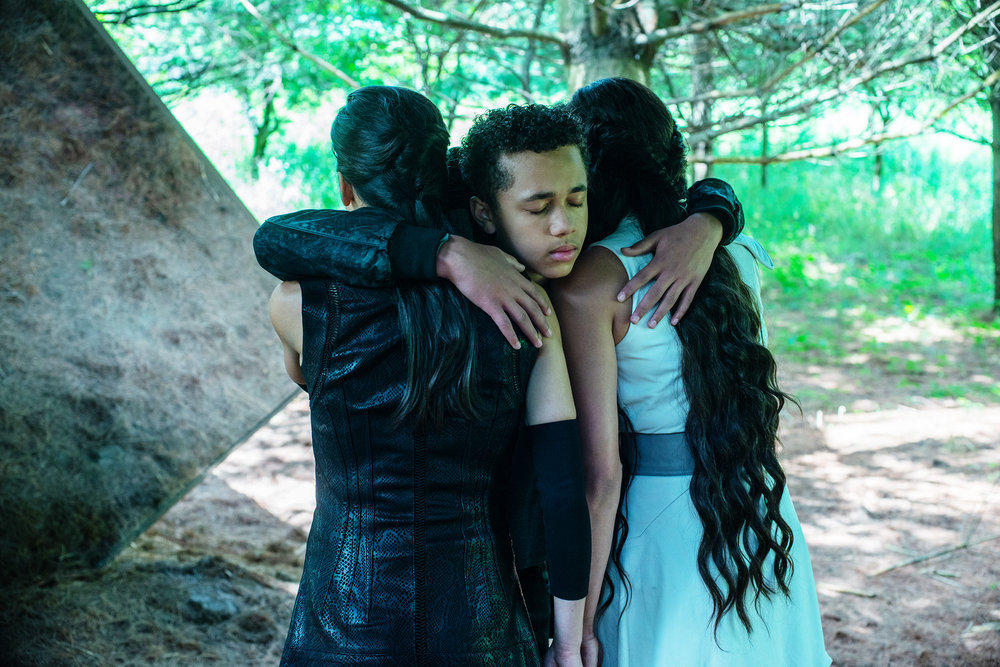