In this week’s episode of Killjoys, we find out what happened to the Jaqobis brothers and Delle Seyah after aimlessly floating through space at the end of season three. Spoiler alert, they land on a planet and things don’t go according to plan. Naturally the trio soon find themselves in grave danger. 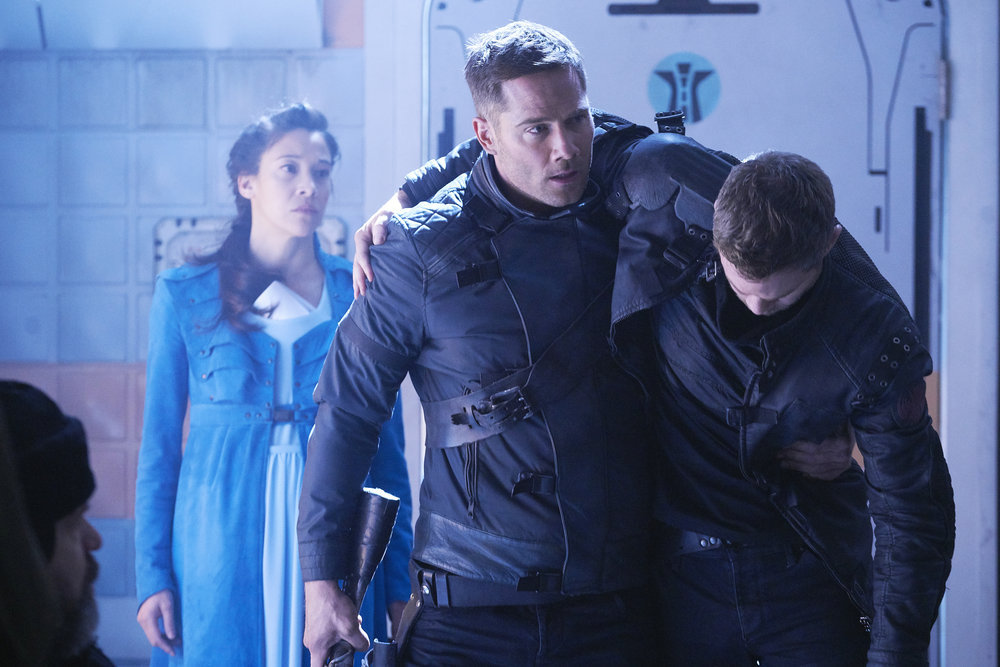 Having crash landed on an unknown planet, D’avin (Luke MacFarlane), Johnny (Aaron Ashmore), and Delle Seyah (Mayko Ngueyen) are walking trying to find any sign of life to figure out where the hells they are, when a vehicle carrying three people fast approach them. A fight ensues with these unknown assailants losing but Johnny’s injury gets worse as his punctured lung takes a beating. Luckily however, they are able to find a depot five miles east of their location and meet some of the locals. D’av demands medical help and one of the residents says they have supplies, but a doctor won’t be in until the morning. There is definitely something weird going on in this place as all the people seem shifty as hell.

Running out of time with Johnny’s life on the line, the trio sequester themselves behind what looks like a rough surgical room and Delle Seyah has a radical proposal. The only way they can save the younger Jaqobis is by Hullenizing him with the small bit of green plasma she has left. With no real supplies to help Johnny, D’avin is forced to agree. The aftermath is when things get really weird. 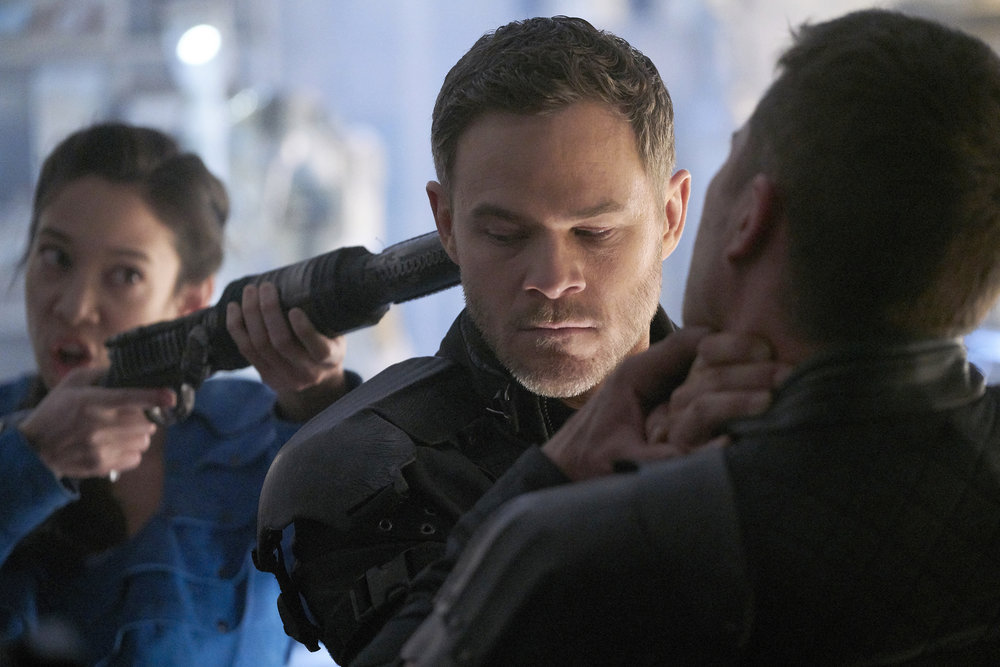 Having survived the transition, but not receiving a full transfusion of plasma (through his brain stem nonetheless), Johnny is really mentally unstable. He wakes up and chokes D’avin while angrily asking what he did to him with Delle Seyah pointing a gun at his skull. Johnny starts to laugh though and says just kidding. He wasn’t mad because he’s gotten an awesome upgrade. Delle Seyah and her baby daddy give each other a look that says clearly something is wrong here.

They rejoin the others and get hired by the locals to represent them. One of the women explains that they are a farming collective and that they can’t meet their quota this month and the fines for failure strict. They just need the Killjoys to negotiate a fair deal for them and in exchange they’ll help them get a ship. All of a sudden Johnny asks one of the men for his hat and then grabs D’av’s gun to point it at the dude. The elder Jaqobis calmly says that he knows his younger brother is not himself right now and that he doesn’t have to shoot anyone. John backs down for the moment having regained his cool.

Soon however another group of men arrive and the locals turn on them, their leader telling the new comers to take the Killjoys and that they want out of there. Johnny seems to quickly calculate what is actually going on and is easily able to take out all the people with guns. He tells D’av that this is a con job. Delle Seyah adds that the planet must be a prison and the people there were going to make them do their time instead. But one of the survivors says their wrong and lifts her shirt up to prove that this place is indeed a farm collective, except that the people themselves are the goods. Turns out that they are in a colony for those with debts and it’s mainly unsupervised. They were all there to work for what they owed in one way or another, hers being was being an organ grower. When it’s their time their chip beeps and tells them which depot to go to or else they get tracked down. Once the organ is taken a new one is implanted along with a dosage of regrowth medication where you then start the process all over again. Except no one can really pay off their debt because they charge for food.

All of a sudden, all the chips of the dead men go off and the one of the prisoners explains that now a ship full of men and guns come. This is good new to D’avin though because that means there’s a chance they can use it as their ride out of there. So they come up with a plan where all the detainees get de-chipped so that they can’t get fried remotely. When the reinforcements arrive their group can take them out and seize the space vehicle. As D’av and the others argue, we seem to see Dutch appear and tell the younger Jaqobis to fight it and that he’s losing her. John tells her that she’s not real and she counters that it doesn’t mean she’s wrong. Now that he’s got plasma in him I wonder if that could be a mental reach from the real Dutch in the green.

The R.A.C. Facility in the Aftermath

Meanwhile on the Hullen controlled R.A.C. facility, Zeph (Kelly McCormack) and Pip (Atticus Mitchell) find themselves alone trying to figure out a way off the massive structure. All of their overlords also seem to be mostly unmoving. I wonder if this is because Aneela has been cut off from being able to control them since she is in the green. Zeph comes up with a plan for them to hotwire a Black Root ship and regroup with the others. They are able to find Aneela’s base where Fancy (Sean Baek), Turin (Patrick Garrow), Pree (Thom Allison) and Gared (Gavin Fox) are along with the remaining survivors. Turns out that the Hullen on their ship have gone catatonic too. Zeph asks what John thinks about them and discovers that the Jaqobis are not onboard. Turin explains that the boys went to the Necropolis with Delle Seyah and never returned. They also had no way of getting inside because the elevator is gone. The newest member of Team Awesome Force comes up with a plan however needing Khlyen’s mirror cube and a Scarback willing to help them. Being the only female currently in their small band, Zeph reminds Turin and everyone else not to underestimate her because she survived in the dark and alone (mostly) in a Hullen infested R.A.C. base building tech to get herself out of there. As far as a Scarback to help them, Gared asks what about an ex-Scarback if all the others won’t want anyone to go into the Necropolis because they consider it a tomb.

Gared and Pree head to the Westerley White Sands where they meet Fairuza (Anna Hopkins), an ex-Scarback and current dominatrix. It’s obvious that Gared had been there before for her services but he tries to play it off that he heard about her through the grapevine. When it’s their turn, Pree asks the woman that her new line of work seems in contradiction to Scarback beliefs. She responds by explaining that she took pain for 12 years until she found out that her religion was based on crap. Now she’s in charge of who hurts. Gared blurts out that they need help getting into the Necropolis and she tells them to get out. The barkeep protests that he’s a friend of Alvis and they are looking for the person who killed him, but to do that they first need to get into that floating tomb. He goes on to say that they can get inside however require someone who knows the place well enough to guide them. Fairuza agrees to come as long as she gets to keep any artifact she finds. Pree doesn’t have any issues with that condition and is about to leave when Gared suggests they stay to worship since they’re here. The owner of the Royale says why the hells not, he hasn’t been that good anyways.

Zeph has managed to hack Khlyen’s mirror cube with jump technology from the Black Root ship and it will now allow them to enter the Necropolis if her calculations are correct. Fairuza and Pip come along. Upon arriving, Pip goes down to see if he can find any CCTV footage of what happened while Fairuza provides death rites for the dead Scarbacks. Oh but what’s lurking around there? The Lady’s nasty plasma spiders!

Pip makes it down to the lower levels where he is able to turn on the generator and then looks at the Necropolis’s recording system. Once he replays the footage on the tenth level (where the ladies currently are) he sees that the spiders came out of the green and basically attacked everyone. He freaks out and smacks into a catatonic Hullen who suddenly moves, grabs Pip and opens his mouth where an insect comes out. It’s like every scary alien movie ever.

Up at the worship floor, Zeph takes a sample of the plasma that Dutch and Aneela vanished into when Fairuza calls out saying that she had found something. That something was dead Hullen who had committed suicide. The ex-Scarback suddenly tells the other woman not to move. She then quickly roll over at the count of three. As Fairuza says three, Zeph does as she’s told and the dominatrix fires her weapon at something behind the technologist. What do they find skulking there? A spider of course. The duo then hightails back to the cube heading back when Zeph runs into Pip who seems normal. Except we know he’s not because he’s been infected by a Hullen spider! 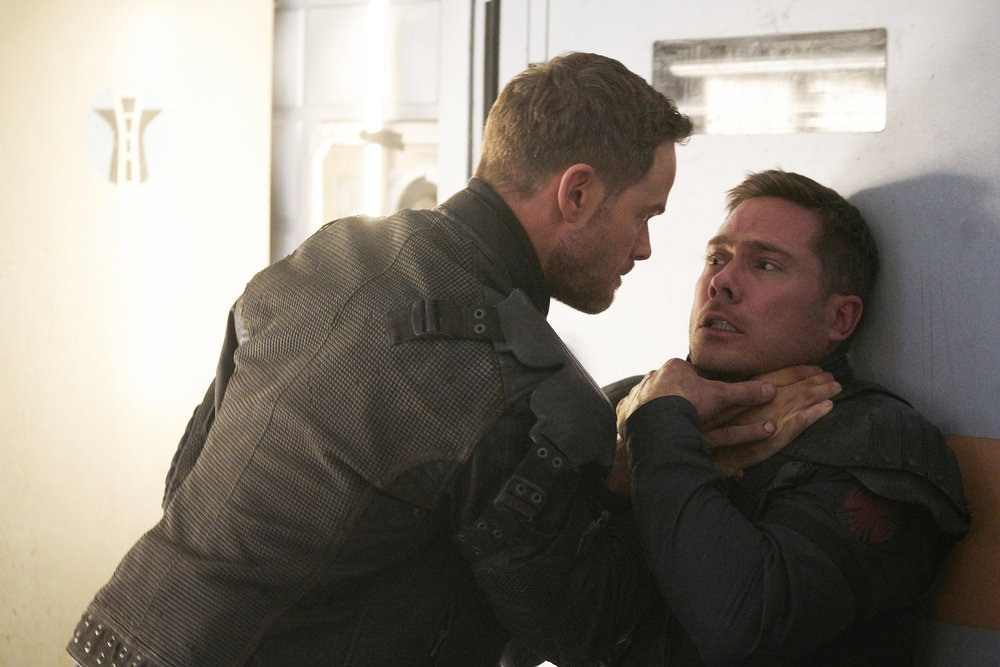 Back on the organ harvest colony, Johnny hands D’avin a beacon that he made from the chips of the detainees. He explains that he’s coded it to Lucy’s specific frequency so that if his big brother’s plan fails, they have a backup. All it needs is to get hooked up to the elevator and that will increase their chances of getting out of there. D’av gives the beacon to Delle Seyah saying that he needs Johnny there with him to fight. After some bickering between the two Hullens, the elder Jaqobis gives a gun to the woman currently carrying his child and tells her to take care of their baby. Delle Seyah in turn awkwardly says you too. To make things even more weird they shake on it.

Seyah Kendry takes the beacon and connects it to the panel inside the elevator. The detainee Bea is with her and the other woman asks how the three of them survived in there without killing each other. We get a hilarious flashback of D’avin doing a lot of HIIT exercises, Johnny and Delle Seyah playing games, Delle Seyah acting as a therapist for the boys, and her threatening to kill they both if they didn’t stop snoring and farting. As she is able to activate the device the guard reinforcements soon arrive instead of Lucy. Well played John Jaqobis. He fibbed and the guards were actually tracking the chips. Meanwhile back at the depot he killed everyone else and tricks D’av by using laughing gas to lower his guard. He then teases his brother asking what if he had to be cured the way Sabine was cured. D’avin says that he would wreck him. Soon after he gets punched in the face, knocked out, and loaded onto the passenger seat of a truck John has commandeered. His real plan had been to get plasma and apparently he knows where to find it. 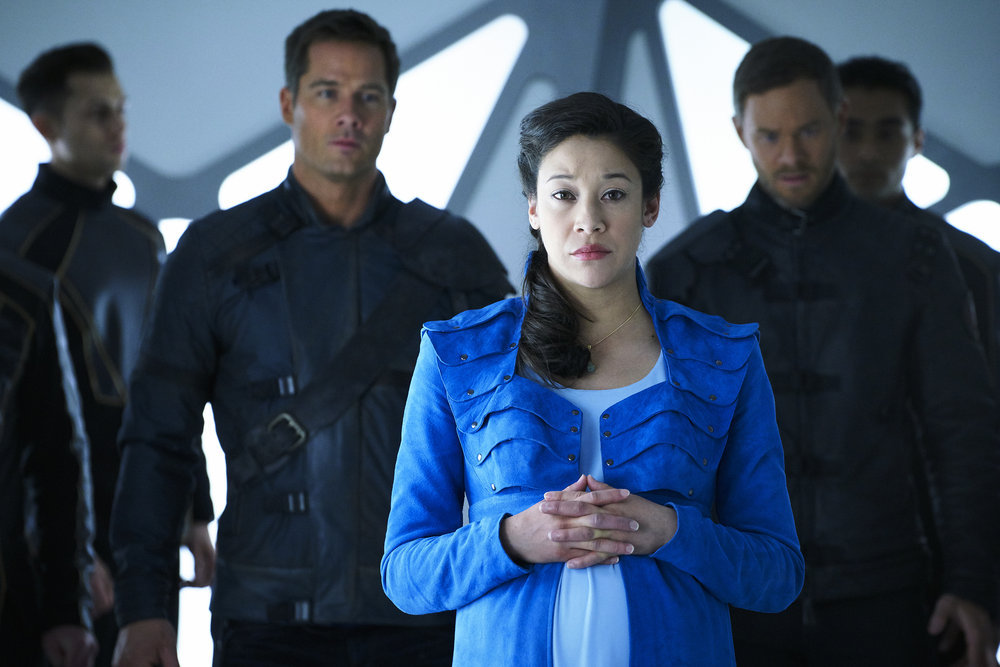