‘Killjoys’ Review: Aneela and Delle Seyah are a Match Made in Hullen

Things just got a whole lot crazier in the Quad as Team Awesome Force prepared to take back their RAC on this week’s Killjoys.

In theory it was a great plan, with Turin’s help they kidnapped three high ranking officers from nearby RACs in order to prove to them that the Hullen have invaded their territory. The trio then get a front row seat to all the action to prove that Dutch and the gang aren’t crazy.

Having recruited a few more soldiers to the cause, Dutch, D’Av, and John lead their troops into killing all the Hullen in their own RAC via releasing a paralytic agent through the ventilation system. It is supposed to neutralize both human and Hullen so that they can scratch each person one by one to determine who should be eliminated. However, things don’t go according to plan when surprise the Hullen aren’t paralyzed after all because they had been wearing patches  counteracting the toxin. That means someone ratted them out. 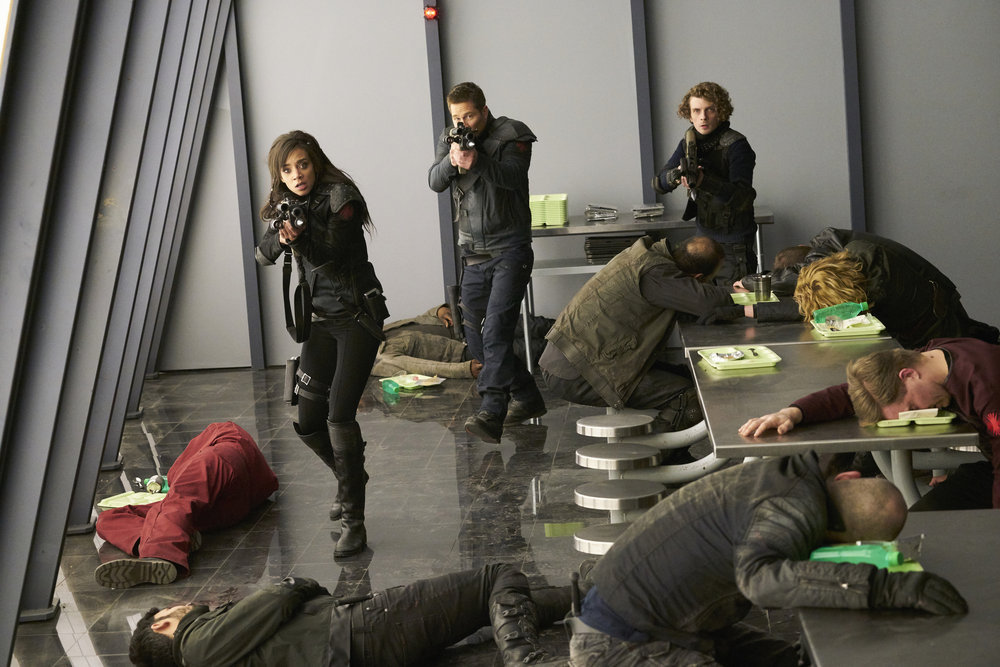 One of the nerds die before Dutch is able to save him. Knowing they are heavily out manned and out gunned, she decides that they need to head to the armory to stock up on stronger artillery because they can’t back out now, they would be leaving the humans on board for slaughter. However before they can get there, the group is surrounded by uniformed Hullen who had been sent by Aneela to retrieve a package. It seems that the commander was indulging Delle Seyah and sent a team to get her something from the Quad because she is homesick. Dutch is able to get away slipping through a garbage chute while Johnny and D’Av are taken for interrogation.

The Hullen unit leader (played by the glorious Noam Jenkins) is possibly the wittiest Hullen of them all and I love him. He has such a glorious banter with the brothers that really could go on for hours but alas, time is short. He implants chips into their necks and then has John strapped to a chair with a little device that scrambles his brains thus slowly making him loose his memories while D’Av watches. Seems that the alien hive creatures want to know how they poisoned the Arkyn plasma. They know someone on Team Awesome Force did it but they don’t know how. When that tactic doesn’t work, they bring in one of the other nerds (whom we find out sold them out in exchange for assimilation) except he is soon killed. A super pissed off D’Av uses his weird power over the plasma to make another Hullen brain explode. Much like this:

Unit leader then says that he’s only ever seen Aneela do that and understands why she wants him. Initially we thought that the commander was grabbing Johnny for Delle Seyah after her black warrant against him as a little gift but it turns out Aneela wanted the elder Jaqobis all along after seeing him when he was connected to the plasma. D’Av is then knocked out and taken back to the Hullen ship with John about to be killed. Of course Dutch gets back in time to prevent that.

Speaking of which, Dutch manages to get to the armory where she finds the highly dangerous weapon that wiped out a whole bloodline during a meeting of the Nine. However she is blocked by Banyon who thinks she is the enemy. They scuffle and Dutch stabs the other woman believing she is Hullen, except she isn’t. The Killjoy apologizes and explains what’s going on and eventually Banyon gives her the code so that she can get out of this sector. She relunctantly leaves the officer bleeding to go find Johnny. 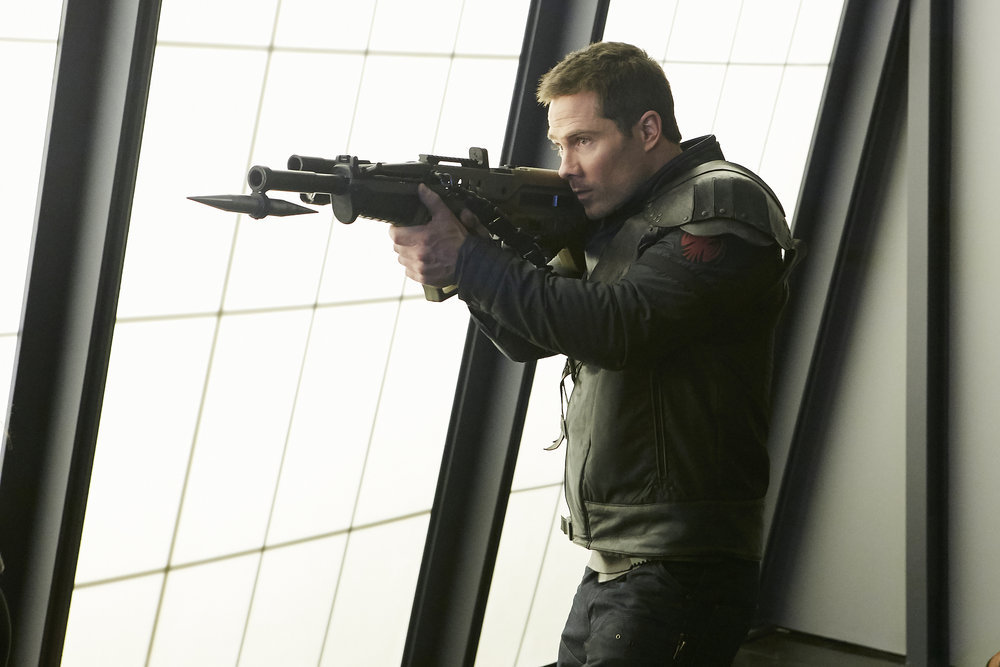 Once they are reunited, she shows him the weapon and he drops some plasma and hopes that it’s calibrated to be able to tell the difference between Hullen and human. Thankfully it does and the aliens creatures are all wiped out of their RAC in one sweep.

Meanwhile back at the viewing bunker, things got all tense as one of the RAC officers thinks that Fancy is still one of the Hullen. They lost visual once Dutch and the others got ambushed and Khlyen’s former right hand volunteers to go talk to the Hullen they have captive. The prisoner taunts him, saying that he’s not cleansed, he’s just in remission and that he’ll want to come back to them. She plays on their fears, planting a seed in Fancy’s head that the others don’t fully trust him and unfortunately, Turin temporarily falls for it. He doesn’t open the cage door immediately until the former level 6 kills the female Hullen.

When they are all celebrating at the Royale, Turin brings Fancy a shot in an attempt to apologize but he is quickly rebuffed. There’s only room for one asshole at the table. Ouch. But he has a point because it sure didn’t feel like he was a valued team member. Fancy has been a lone wolf in the past but has shown himself to be humanity’s side. Now though, I think the Hullen have gotten to him because he’s being taken for granted. Oh Fancy, you deserve better! 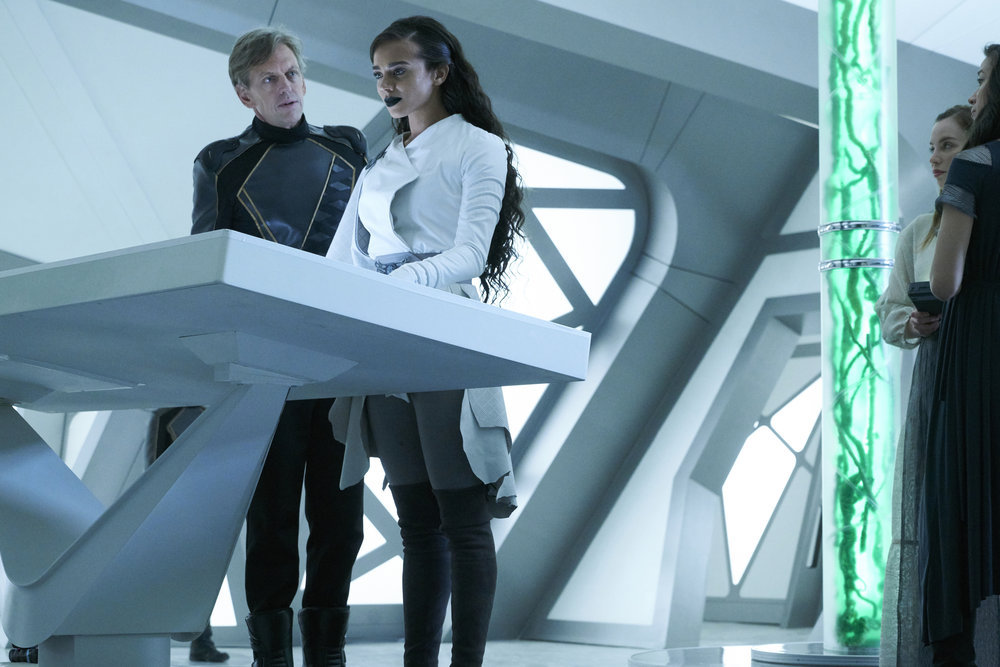 In the meantime on Aneela’s ship, Delle Seyah and Gander have been at war as as each tries to remain in their commander’s good graces. Gander has been the Hullen leader’s right hand for a long time it seems but now that Seyah Kendry is here, she’s looking to replace him. In previous episodes he has warned her that their leader often breaks her toys after she tires of them. For the moment though, the former member of the Nine appears to be a favorite and Aneela reveals her plans. Just as Dutch and the squad are bringing home one of the RAC officers from a different sector, the entire station explodes. This was all thanks to the commander’s plan because she wants her doppelgänger to be completely alone like she was before killing her. So she played Gander and Delle Seyah against each other so that she could get her real plans underway. Turns out she also destroyed the other RACs near the Quad who were going to turn on them. Delle Seyah is so totally turned on by the Aneela’s duplicity that she kisses the Hullen leader. At first the other woman is rattled but then she warms up to it and smooches back.