In the season premiere of Killjoys, the stakes are raised as Team Awesome Force prepares to do battle with the Hullen, the beings who have merged with plasma and turned into crazy universe conquering beings.

When we last left the team, they had succeeded in poisoning the Arkyn plasma but at a terrible cost. Johnny (Aaron Ashmore) lost Pawter and Dutch (Hannah John-Kamen) lost Khlyen (Rob Stewart). While Khlyen had been touted as a villain throughout season 1 and 2, we finally found out that he had been preparing Yala to battle his own daughter Aneela, as his people were about to take over the Quad and assimilate many into their ranks. We also got the backstory to the plasma and how it became sentient when merged with a human host. Likely its prime directive was to spread itself as much as possible. Khlyen had once though that the green goop would save them from starving but instead turned them into monsters that are incredibly hard to kill.

Here are the most important things to know from tonight’s episode: 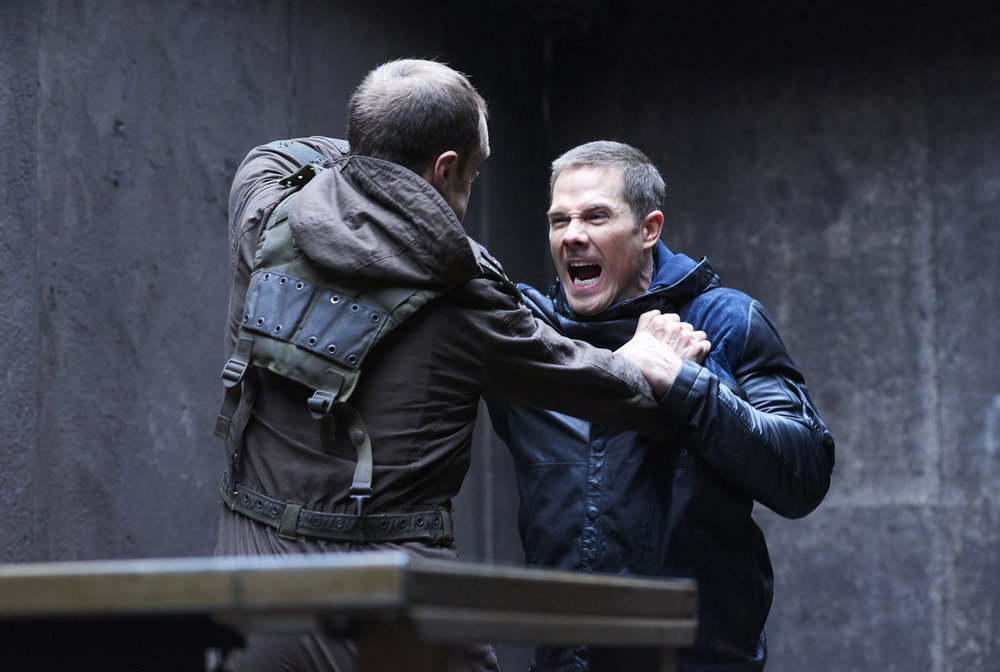 Dutch and D’Avin recruit Fancy (Sean Baek), Alvis (Morgan Kelly), and Pree (Thom Allison) on their mission to kill the Hullen one hive at a time. They manage to find one but it’s mostly abandoned, except for one messenger left behind who tells the group that they know they poisoned the plasma at Arkyn. But turns out not all of them are Arkyn born so the others have gone into hiding and are preparing to come after them. The messenger then self-destructs into green goo.

Mass Defection In The RAC

Meanwhile at the RAC, Dutch and D’Av are called into an emergency meeting because an oversight team has arrived to figure out why 400+ RAC agents have suddenly gone missing (including Johnny). Could they mostly have been Hullen undercover? That would make sense since Khlyen’s people have been pulling recruits from the RAC (like Fancy). Maybe some of them died when the Arkyn plasma got poisoned or they were recalled and have gone into hiding. However, according to Turin, he thinks that they all woke up from being controlled by the plasma and got the hells out of the Quad. 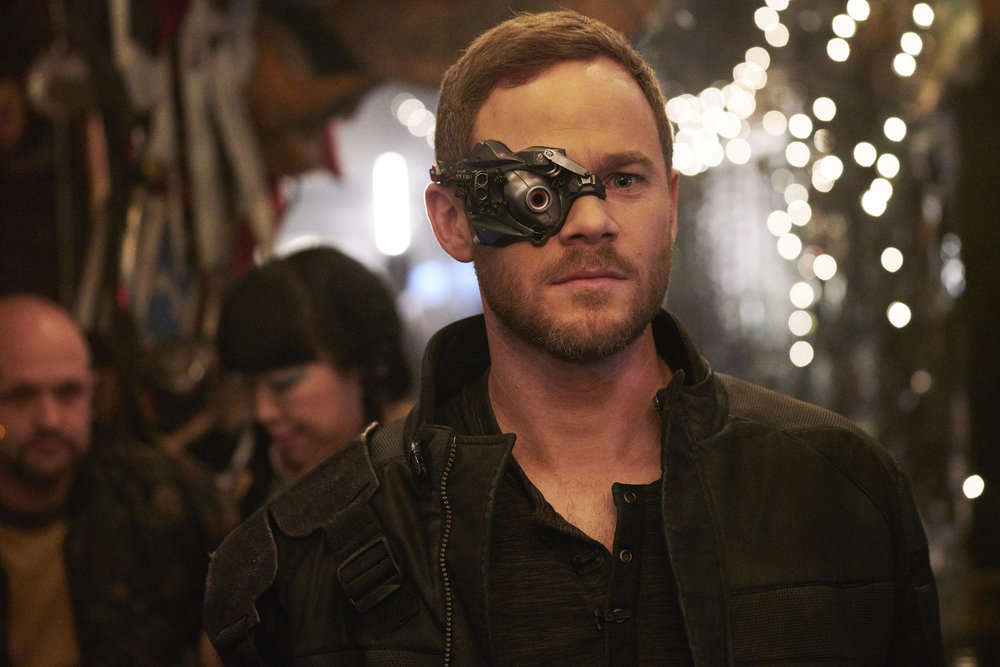 Johnny is Still Separated From the Team

The level 3 Killjoy is now trying to find the hackmod Clara somewhere in the Quad. He meets another modified human with Alice (Clara’s modified arm) on her, but the other woman has no idea how it got attached. Alice had been sending both Johnny and his current owner signals to their current location.

At the Royale, Dutch and D’Av meet with Turin and she explains that Johnny had been sending back chem probes every time he passed a RAC facility in the J and it turns out that they are all near plasma pools just like theirs. They need to enlist the help of other RACs to fight the Hallans. However their superior office brings up a good point that they don’t have anymore of Khlyen’s concoction to poison other pools. So Dutch wants more Hullen and toxins to be able to do this.

Turin comes up with his own plan and has Dutch and D’Av travel to the Veluvian Steam Baths on Leith to kidnap a Qreshi rich kid who is also a black market dealer nicknamed The Mouth. Back on Lucy (Tamsen McDonough), the Killjoys inform their guest that they need him to find a beacon that will help draw out an organized crime syndicate moving into the Quad. He tries to negotiate to get off the ship but Dutch counters with staying on board, a monitored line, and his teeth. The Mouth accepts the terms and has five hours to find the beacon.

He is able to locate it quickly and it happens to be in the possession of a black marketer named Sweet Janet. Good news is that the other woman is willing to sell to them but only in cash and it must be tonight. 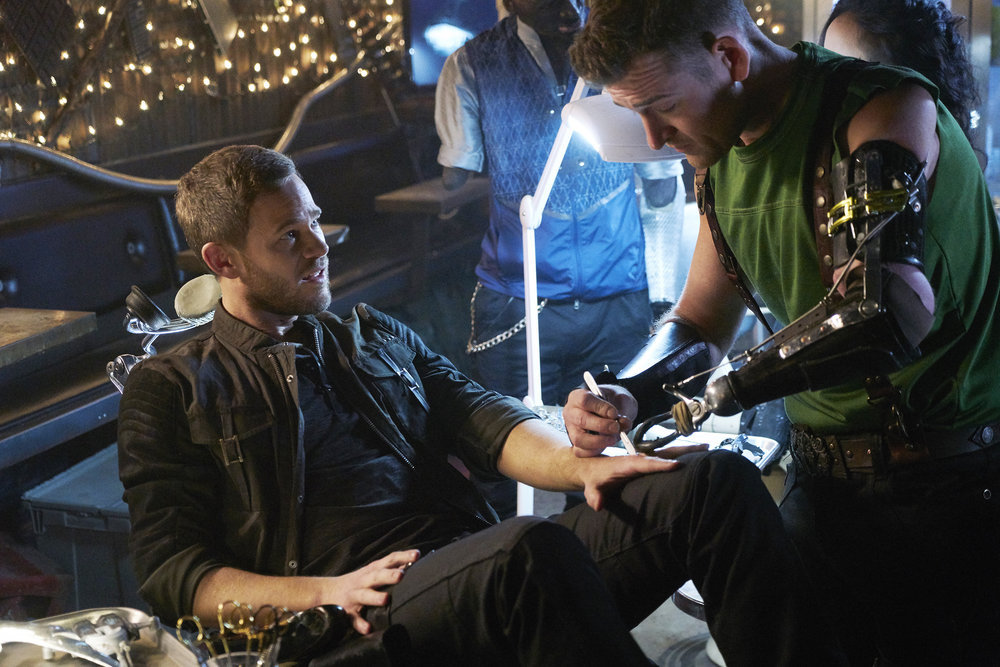 Johnny and his new companion Ollie head to Rat City since it was the last place he knew that Clara was heading to. She was there to recruit a friend against the mega hackmod factory. Ollie tells him that if they do find Clara and they are serious about storming The Factory, she’s in if they’ll have her. Once at Rat City, Johnny wears his fake mod into a bar that doesn’t allow basics to find Clara’s friend (unmodified people). It’s got a very steampunk space feel, which is awesome.

Ollie proceeds to tell him about the hackmod class system. Mods like Alice are special order and so she’s called a spec and tends to be treated better in The Factory because buyers pay more money. Others though are more off the shelf and essentially are cheap super human indentured labor. They finally meet Clara’s friend Yoki who says that she never met the other woman and that whatever she was trying to find she didn’t. She also ominously says that this place is not as safe for their kind as it used to be and that they should leave. Yoki walks away with John goes after her except that the lens of his faux mod falls off and he is then forced to undergo a real modification or lose his life. He gets an addition to this finger where he is able to generate a laser beam using his mind. Cool and handy!

Johnny and Ollie ask for help from the bar’s owner to see if anyone’s seen Clara. Eventually they get a lead and the Killjoy is supposed to meet a contact whom runs away from him. At the lookout point Ollie gets attacked by a mysterious man, but luckily the younger Jaqobis brother is able to kill the assailant before she got hurt further. However, it turns out that the man is wearing two faces with a layer of plasma in between. Now what is that about? 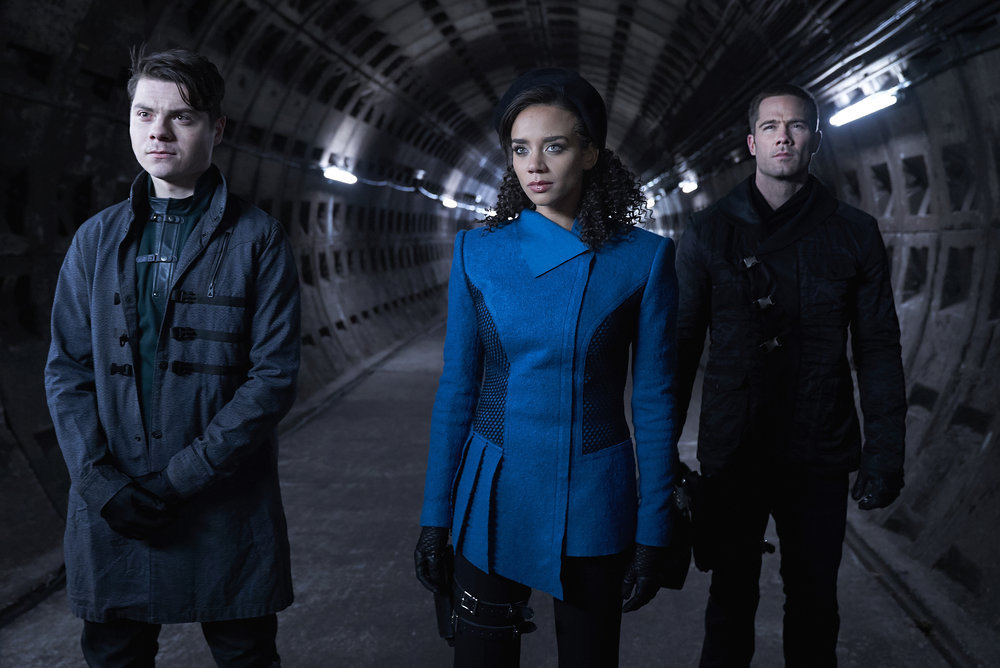 Dutch, D’Av and The Mouth head to meet Sweet Jane to buy the beacon off her when another group attacks. Fancy, Alvis, and Pree are able to help subdue the other men and the group makes their way out of the tunnel only to be apprehended by Border Control. They get taken in and questioned about the beacon and what their plans are. Dutch is the last one to get interrogated and she tells the story of monsters who have infiltrated their lives and the woman sitting opposite from her thinks she is talking about the Hullen, but actually she’s talking about herself. Turns out that Team Awesome Force planned to get captured on purpose to draw the Hullen out of hiding and use them to make more toxin. Brilliant!

Turin Finds A Bunch of Ships

After a successful toxin gathering mission, Dutch and D’Av meet Turin at an undisclosed snowy location. He explains that they initially missed this during the chaos of the plasma poisoning on Arkyn but because he’s paranoid as balls, he eventually found one of their secrets. The senior RAC officer uncloaks a whole fleet of Hullen ships before their eyes. They’re all empty for the moment but no one seems to be able to get in either. Well, except D’Avin. Why he’s alone with the ships after their meeting is a mystery, but he runs his ungloved hand upon the bottom of one of the crafts and a ladder appears that he boards. It then goes invisible again and then seems to teleport to some unknown destination. This must have something to do with D’Av’s plasma whisperer abilities.

Johnny and Dutch Really Miss Each Other

Having been each other’s only family for a long time, Dutch and Johnny are BFF’s and they are both having a hard time during this separation. They have sent the other a hologram message recording their current exploits but not revealing the full truth of their circumstances. D’Av reminds her if that she asked Johnny too, his baby brother would come home, but that’s exactly why she won’t do it. Meanwhile Johnny thinks that they are managing just fine without him while he’s struggling with Clara missing and being outside of his element as a rogue Killjoy. Still, it’s really nice to see how much they really care about each other as best friends and platonic life partners.

It’s wonderful to be back in the Quad and be scheming with Dutch and Team Awesome Force one again. After last season’s intense finale, she’s still mad as hell and wants justice for all the screwed up things happening in her turf. I wonder though if Dutch could take Aneela one on one given that the Hullen heal quickly and have enhanced strength, agility, and other abilities. Still looking forward to their eventual confrontation and Hannah John-Kamen’s dual performance as both characters. It’s also been interesting to see Johnny’s growth as a character as he ventures out on his own. We saw a bit of that last season already with Pawter and saving Westerly, but this time around he’s helping Clara. He does seem to have a soft spot for strong women with a cause. The mystery surrounding D’Avin though continues to grow as he can now gain access to the ships. What was really done to him in the military that makes him immune to the plasma and even control them to some respects. The Killjoys world has definitely expanded as we are beginning to learn more about other entities like The Factory and how widespread the Hullen truly are. However, the best part of the show continues to be the characters and their relationships. As bonds and loyalties are challenged, will Dutch, D’Av and Johnny survive this season? Time will tell and I can’t wait to see what’s happens next!