‘Keanu’ Review: Not a Complete Cat-tastrophe

Who knew the tiny squeaks and cute face of a kitten could pull so strongly at the heart strings? (Let’s be honest, we all did). How far would you go to save the furry one you love? That is the premise behind Keanu, the first film from the team of Keegan-Michael Key and Jordan Peele.

The story opens with Rel Williams, played by Jordan Peele, who was just dumped by his girlfriend and feels that he has nothing left to live for. Rel reaches out to his close friend Clarence Goobril for guidance, played by Keegan-Michael Key, but nothing can console his broken heart. That is until Rel hears the soft pitter-patter of kitten feat on his doorstep. It’s love at first site.

Things don’t stay bright and cheery for the duo for long. Rey and Clarence decide to spend their night at the movies, but when they return home they find Rel’s apartment ransacked, and Keanu has gone missing. Rel loses control, and all reasoning is thrown out the window. Nothing can stop the man on his mission to find his favorite furry feline. They soon realize that they have bitten off more than they can chew, however, as they discover Keanu has been catnapped by the leader of the East Street Blips.

From here the movie really begins to fall into the cookie-cutter fish-out-of-water story we’ve all heard before. Uptight city folk travel over to the wrong side of the tracks and must pretend to be someone they aren’t in order to blend in and complete their mission. It’s the humor and pairing of Key and Peele that really helps this movie stand out on it’s own. Those that know the duo from their years on the Key and Peele show know exactly what to expect, but even if you weren’t a fan or never got around to watching the show, there is still plenty to enjoy in this film.

The movie is consistently funny and the cameos are well done. When they have a celebrity on the screen, it’s not wasted, always giving them something interesting to do. We have all seen Will Forte in the trailers, but he is not the only surprise star.

One thing that may catch the viewer off guard is that this film is full of violence. For every funny joke there is a gun fight, torture scene, or ruthless death. The film does find a good balance between the two, but the more brutal scenes can sometimes feel jarring in an otherwise humorous movie.

Overall the film was enjoyable, if somewhat predictable. The movie seemed to be the perfect length, where I never felt that any scene or joke ran too long or overstayed it’s welcome. If you’re a fan of Key and Peele, or are just looking for a movie where you can go on a fun adventure and enjoy a few laughs, this is definitely worth a viewing.

James is a freelance writer, who also hosts the Life Of Gaming Podcast on iTunes.
Previous ‘The 100’: The Problem With Pike
Next ‘Game of Thrones’ – “Home”: Book Readers, You Know Nothing 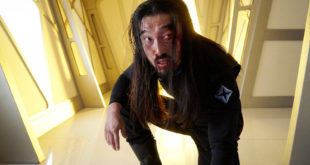 In this week’s episode of Killjoys, Team Awesome Force heads to Leith on a mission …