‘Jane the Virgin’ and the art of the OMG WTF cliffhanger

Spoilers through Jane the Virgin 2×12, “Chapter Thirty-Four,” including some major ones, so stay away until you’re all caught up!

There’s this magic thing that happens in the final moments of a Jane the Virgin episode–I don’t know how the writers manage it week to week–but as the episode comes to a close, events go from zero to a billion in a single pop song verse.

It’s not truly surprising, especially when you remember Jane the Virgin is made by The CW. I grew up on shows like Dawson’s Creek and One Tree Hill–I know how crazy the cliffhangers can get. In Jane we’ve already had newborn kidnappings and near-death stair incidents. And let’s not forget we all watched a dude get impaled on an ice sculpture at the buzzer.

But there’s something different about how Jane approaches the drama. It’s a TV show that is very good at the bait and switch, which really says something since as the viewer have a telenovela narrator holding our hand throughout the story.

A few weeks ago the mid-season premiere “Chapter Thirty-One” got pretty crazy and ended with Rafael getting needled in the neck by his estranged mother (who we then learned is the crime lord Mutter). As with most of the cliffhangers in Jane the Virgin, things got cleared up in the opening moments and Rafael appeared to be…relatively okay with the events that transpired afterwards. But some cliffhangers, like the season one finale, or last night’s “Chapter Thirty-Four” ending, take a little bit longer to resolve themselves. I think we’ll be feeling the effects of last night’s ending for week’s to come, whether for good or bad.

But let’s talk about how we got to that shocking finale in last night’s episode. It was a whirlwind of an hour, guided by an overly talkative narrator, teasing us with the prospect of a name change for the show. At first, I have to admit, I thought Jane’s relationship with Professor Chavez would go down the Little Women route, giving Jane her own Professor Bhaer who would allow her to shine. Alas, Professor Chavez mentions he’s only into Jane as a casual thing and right then I knew they wouldn’t get past the make out phase. (Which I’m completely okay with even though no one would have been sad to see the actor repeat his dance routine from Magic Mike XXL.) 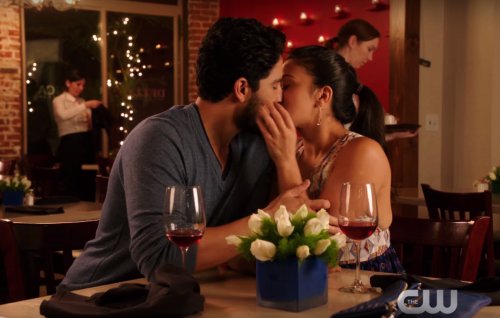 Besides, with the way the show has been pushing the love triangle between Jane, Michael, and Rafael, there’s no way the writers could simply push those shippers aside. Unfortunately for Rafael fans, Jane put the kibosh on their relationship, shooting down any hope he might have had for them to be a family. I felt for Rafael in that moment, but I can’t say I’m surprised. He’s been downplayed heavily in season 2, making ludicrous mistakes one after the other. On top of that, he’s embroiled in yet another unplanned and unwilling pregnancy, this time with Petra (a story line I’m really not a fan of) and their romance seems to be kind of, maybe, possibly heating up.

And then, out of left field, there’s Michael.

A few weeks ago, Michael pushed Jane away, treating her coldly and forcing her back to Rafael, and then eventually toward Professor Chavez. However, we learned in “Chapter Thirty-Four” that Michael’s reason for this wasn’t because he didn’t have feelings for Jane. In fact, the opposite. He drove her away to keep her safe from Rose and after the character’s (somewhat suspicious) death, he felt like they could be together again.

After the intense hospital scene, and yet another emotional breakup between Xio and Ro, Michael shows up at Jane’s door (the site for the majority of the cliffhanger endings) and professes his feelings. I’m sure that the sweet summer children among us would like to believe this is the end of the emotional struggle for Jane, that she’s finally made her “choice.” A lifetime of watching CW shows and with nearly two seasons of Jane the Virgin under my belt, I’m not so hopeful. I wish I could believe this is “it” for Jane, but there are still ten more episode endings on the season two books and I’m certain at least half will involve Jane’s love life.

That doesn’t mean we won’t get some super sappy and potentially title-changing moments between Jane and Michael–I think we will–but like every other time Jane finds happiness, disaster intervenes.

What do you think? Will Jane FINALLY be happy in her romance life? Is Michael “the one?” How many more crazy cliffhangers are we in store for on Jane the Virgin?

Jane the Virgin airs Mondays on The CW at 9pm EST.