Honey! Put out the good china! We have companyyyyyy!

Spoilers: Obviously. This is about the ninth episode of Homeland season four, so if you haven’t seen it, I can’t be held responsible for your feelings.

Excuse me while I go catch my breath, because Homeland, you have left me as winded as a flight of stairs. I spent the last ten minutes of last night’s episode eating my shirt out of fear. (It tasted delicious, by the way, so thank you.) If any of you stopped watching Homeland because of those–ahem–bad episodes, well, now is the time to hop back in the car because it’s getting hot up in the streets of Islamabad. Literally. Because explosions. Kaboom.

Be honest, who saw that coming? Because I SO did not. I thought the kid with the bomb vest would make an appearance somewhere in the American embassy, or there would be a standoff at the airport runway. RPGs into the CIA vehicles? File that under “What the fucking fuck?” Courtesy of my new friend, Lockhart. (He has the best lines.) But we’re warming up to Remond too, right? 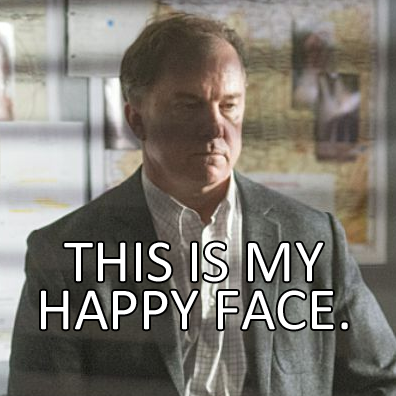 Let’s take a step back for a moment and appreciate Carrie Mathison. “There’s Something Else Going On” is an episode on par with some of the best from season one. Right from the start, Carrie knows something is hella wrong, but no one believes her, because she did just come off drugs twenty times stronger than LSD. And because she has no proof. But mostly the drug thing. At the station, along with our friends Quinn and Redmond, things continue to not heat up with Dennis Boyd, and much like his wife, I have to give the sniveling weasel credit for not breaking. I thought he’d crack under that stern Carrie gaze, but alas, no. At least he gave in later, once he realized his life was in danger. Priorities. What a schmuck.

Carrie then makes Quinn stay behind during the prisoner exchange because she needs his eyes and thinks there is something else going on. I wonder if she didn’t know an attack against the embassy was a possibility? She did mention to Dennis “ratbag” Boyd that the I.S.I. was not afraid to take out sources a la Sandy Bachman, and after the prisoner exchange leading to the attack on the embassy, Boyd’s assistance is no longer needed. What I’m sayin’ is, he’s stupid to think he was safe, and Haqqani is going to thank him the same way he thanked Aayan for the life-saving medicine. At least Quinn is still in the embassy to protect everyone because who is better at murder than this dude? 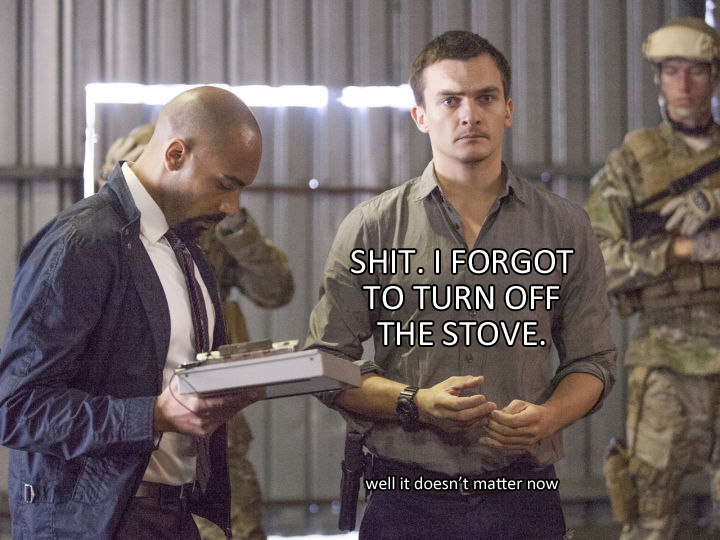 At the Prisoner Exchange–where the prices are shit and all handcuffs are half-off!–the important people make small talk and draw pictures on a map. Redmond gets tired of their frivolous ice breaker and tells everyone, “Let’s light this bomb party and get the heck outta here. I want to be dead before the end of this episode.” It is kind of odd to me that Carrie so quickly trusts Khan when she’s insanely suspicious of EVERYONE else, especially considering his proximity to Tasneem. However, I trust him too, so I expected that to backfire immediately because I have terrible judgment. (Don’t worry, there’s still time.) Oh, and Carrie, sweetie? You ain’t foolin’ anyone with that fake phone call to Khan. Tasneem ain’t stupid, girl. She can put two and two together, and then multiply that by two, so you could kind of say, “the jig is up.”

In this week’s Laugh Out Loud moment, Martha Boyd quickly climbs the ranks of Jen’s Favorites when she tells a marine to “take Dennis’ bag” and then proceeds to search through it like Dennis is a grounded teenager trying to sneak out of the house and smoke pot. God, Dennis. Stop being such a Dennis. Even without that scene, my love for the ambassador would still ring true if only because she is SO good at making this face:

At the air field, the CIA makes a five-for-one trade and you gotta figure they’re going to hire a new agent. I mean, that’s a crappy exchange. Did they at least get a draft pick or two? Saul isn’t going to be around much longer as it is and you can’t get a teddy bear like that from just any federal department. Sports jokes aside, Claire Danes and Mandy Patinkin are nothing short of phenomenal as Carrie coaxes Saul to move away from the poor kid in the bomb vest. It was easily one of the best scenes in the show. The two have such fantastic chemistry I would have really hated to lose that, even though I didn’t think Saul would make it off that runway. The ex-director finally breaks when Carrie pleads, “No more dying” and something in him snaps, realizing he had just screamed at a child to blow up and kill him, too. He relaxes and agrees to follow Carrie, but there’s still a darkness in his eyes. Saul has gone through hell over the past few weeks and it’s not going to be easy for him to bury those emotions and be his affable self again. Thankfully, Carrie picked up his glasses as they left.

And just like that, the tension that had been building fell to the ground in record time. With only a few minutes remaining, my stupid brain was sure that would be the end of the episode. Then Saul gets on the phone with the understandably frazzled Mira, and just as she breathes a sigh of relief, things go kaboom. What a fantastic turn of events! I mean, minus all that death and destruction and the fact I’m sure at least one main character won’t make it out of this attack alive. And then next week we’ll watch Haqqani storm the embassy with his reunited shooting buddies–what’s that? There’s not an episode next week?

To sum up: Things don’t go as planned. At all. Fucking Dennis.

Season 4, Episode 9: “There’s Something Else Going On”
Homeland airs Sundays on Showtime at 8pm EST.