The following are extensive scene-by-scene recaps on ‘Hollywood’ a Netflix social issues drama created by Ryan Murphy and Ian Brennan.


As a special treat, I will be recapping the first 4 episodes of the Netflix original series ‘Hollywood’ using a good amount of screenwriting prose, for what’s arguably, the most extensive scene-by-scene recaps you’ll be able to find on the internet. We’ve also already covered the pilot episode of Hollywood earlier, this recap is on Episode 2. So if you think you missed anything, want to see if this show’s for you, or just feel like catching up on the series, check them out right here.

At a police station, officers take Jack’s (David Corenswet) mugshot. He’s taken to a holding cell and is released on bail by Ernie (Dylan McDermott). Jack complains he can’t have a record, but Ernie tells him vice squad is part of the gig. That Hollywood sells the false idea of American virtue despite being rotten to the core.

Afterwards, at the Golden Tip, Ernie tells Jack that Avis (Patti LuPone) desires another ‘servicing’. Jack complains, as he wants to see his wife having spent the night in jail, and has to attend an audition that evening.

He goes anyway and joins Avis as her escort into a mansion auction. One where her husband’s items are being auctioned off. Jack reveals a casting agent (the brunette he slept with) is going out of her way to help him land an audition at Ace studios. Avis reveals her husband runs Ace. She insinuates that if he satisfies her, she’ll do a favor in return. Minutes later, a pantsless Jack thrusts hard into Avis, as he looks up at a collection of Oscar statues up above them.

Elsewhere, a man with a briefcase later revealed to be Raymond Ainsley (Darren Criss), knocks on the door of acclaimed Asian actress, Miss Anna May Wong (Michelle Krusiec). She lets him in and pours him a scotch but Raymond refuses. He reveals a dream project script he’d written called: Angel of Shanghai and comments on he hates how Americans vilified Asians during the war, revealing he’s half-Filipino himself, much to Wong’s surprise. Though she appreciates the gesture, she doesn’t believe the movie will do well with an Asian woman lead and a half-Asian director. Her proof: her entire career as Asian fetishized, over-sexed, opium addled courtesans and temptresses — roles expected from someone like her in the industry.

Suddenly, we hear laughter a few tables away, and Camille sees her competition: a young blonde woman later revealed to be Claire (Samara Weaving), who offers a dainty wave. Camille returns a smile. Raymond leaves as Claire eyes him down.

Later, Raymond pitches Angel of Shanghai to big shot executive Dick Samuels (Joe Mantello) in his office. Raymond gloats that he got Anna May Wong to play the lead. Dick comments Anna has a bit of a drinking problem but Roman defends her, saying they can resurrect her career and get her the Oscar she deserved for The Good Earth. Dick reveals he knows… he was there.

A flashback reveals Dick was an essential part in Anna’s career. She was the only Asian star in town, and this was to be her big moment. She was excellent in this movie, but as she cradles what is revealed to be a dead baby in her arms during a powerful monologue. The scene soon transitions to the Oscars, where in the audience, Dick looks above at May in the balcony: crying. She had lost out on the role in The Good Earth to a white woman – never being given a fair shot because the studio didn’t think an Asian lead would get distribution.

Dick iterates stresses you can’t open a picture with a Chinese or colored lead. They disagree. Afterwards, Dick shows Raymond a stack of scripts Mr. Amberg (Ace Studio Head) is excited about. He tells him to read them over.

Later that day, Jack has a screen test for the film ‘Tap Roots’. His performance is loud and overly aggressive with a poor sense of framing. Dick calls him talentless, but a woman in purple, later revealed to be Ellen Kingcaid (Holland Taylor), says she sees his talent. She claims to have been responsible for finding William Powell, Lana Turner, and Judy Garland. Dick says he won by discovering Vivian Leigh. Ellen says she has a feeling about Jack, and Dick lets her hire him. The brunette casting director from before who is also in the room grins as does her friend.

Ellen meets with Jack just outside and tells him says she’ll put him on contract for 25 a week. He is ecstatic. Later, Ellen teaches a class on annunciation where she calls out Claire, the blonde woman from before, to answer a question. Then she asks about where the Mid-Atlantic accent comes from, and Camille answers correctly instead. Ellen then leaves with Camille leaving Claire jealous.

On set, Camille is given her first role. She enters a scene dressed as a servant and utilizes a perfect ‘Mid-Atlantic’ accent. The director cuts and calls Camille, as Ellen watches from the distance. In private, the director tells Camille to ‘make the line funny’, like something Hattie McDaniel would do. It’s obvious they want Camille to act like a subservient black stereotype, going from elegance to slack-jawed buffoon. Camille does it the way the director wants and nails it, though feels awful having sold all integrity to get her foot in the door.

At their apartment, Raymond is greeted by Camille who updates him on her day. He reveals that of the 25 scripts, only one is good: The one about Peg Entwistle that Archie had written. When asked about Anna May Wong, Raymond reasons that the only way to get Angel of Shanghai made is to direct a successful film first. Camille returns in a nightgown with a bottle of champagne and two glasses. The couple celebrate and have sex.

Using a sex transition cut, we move from one sex scene to another, where a topless woman straddles Jack. In the morning, he comes home and quietly closes his door. Henrietta (Maude Apatow), his wife, waits with folded arms. She approaches him and takes his pants off and smells another woman on his cock. She yells at him to get out then clutches her pregnant belly in pain. They rush to the doctor, who tells Jack that for the baby’s health: keep his wife calm and stop fucking around.

At a fancy restaurant, Archie (Jeremy Pope) and Raymond meet for the first time over martinis. They talk about Archie’s script and agree to make his movie. Raymond asks Archie, how as a black man, he was able to write such a strong portrayal of a distressed white woman — revealing their similarities as repressed people in Hollywood. This spark’s Raymond’s dream: to get more diverse representation, especially because he himself is half-Asian. He also reveals that he has a black girlfriend. Archie approves, but shows concern about being discovered that he’s black (Though he’s the screenwriter, no one’s seen his face before). The two agree on one thing: That they want to change the industry for the better.

That evening, at The Golden Tip, Archie is picked up by Roy (Jake Picking). And they go back to his place to have sex. Afterwards, Roy asks why he was never charged for their times together and asks this makes them boyfriends. Archie shuns the idea, as both want careers in Hollywood. Roy wants Archie to consider it: a life of happiness and growing old together. Before archie leaves, Roy asks him to coach him on lines. He agrees and the two prove to be quite the emotionally compelling pair.

Later, over one continuous scene at the studio cafeteria, Camille asks a Ms. Ryman for a role consideration but is told the part is for whites only. At another table, Raymond shows storyboards of the Peg Entwistle movie to Dick. He congratulations Raymond on getting his first picture green lit and shake on the deal. Immediately after however, Raymond asks if he can do Angel of Shanghai after this movie, somewhat spoiling the moment. Shortly after, the camera now follows Claire as she sits with Jack and congratulates him on his contract. After some flirting, she reveals that the Peg Entwistle story was green lit (having just eavesdropped) and she tells Jack she’s auditioning for the lead, the romantic interest role being open.

Elsewhere, a nervous Roy has a meeting with an agent, Henry Willson (Jim Parsons). After looking him over for 30 seconds he tells him he’s signing him, as despite being a terrible actor he thinks can be a marketable star. Still, Henry wants a makeover: drama lessons, posture correction, and voice work to make a low baritone. He renames him: Rock Hudson and offers not just to be his agent, but like his godfather too.

Before he can sign, Henry has one stipulation: he gets to suck Roy’s cock. Flabbergasted, Henry rebukes that he knew Roy was gay the moment he walked in, and that he’ll help teach Roy how to hide it, but only after sucking him off cock. Roy reluctantly agrees. 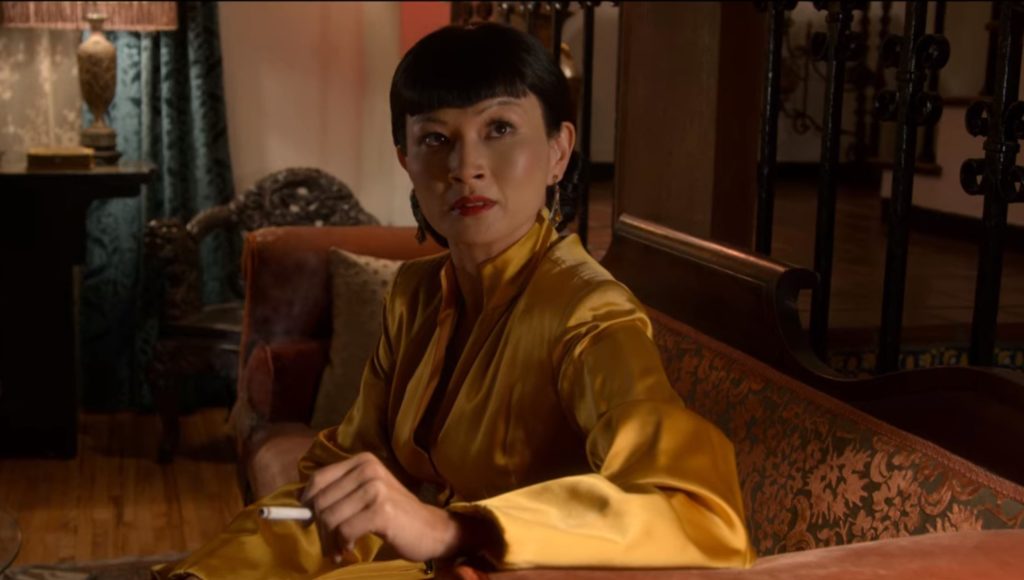 Later that evening, Raymond visits Anna at her house and reveals they’re not making the picture right now. He says he’s trying. She tells him it’s never happening — especially, as someone unable to pass as white, unlike Raymond — then she wishes him luck and looks away. Raymond leaves.

At Ace Studios, Raymond drives into his new private parking spot with Archie. They’re greeted by Jack, who just happens to be strolling by. Surprised, Jack tells them he’s auditioning for the part of love interest in their movie (which is unbeknownst to them somehow?). The three go to lunch but are soon met by Ellen and are introduced to Avis Amberg (though as we know, Jack already knows her intimately). Ellen is surprised Archie is colored, but approves. Avis is helped down the steps of the small walkway by Jack. The camera then pans up to the Ace Studios water tower… with the Hollywood sign in the far distance. 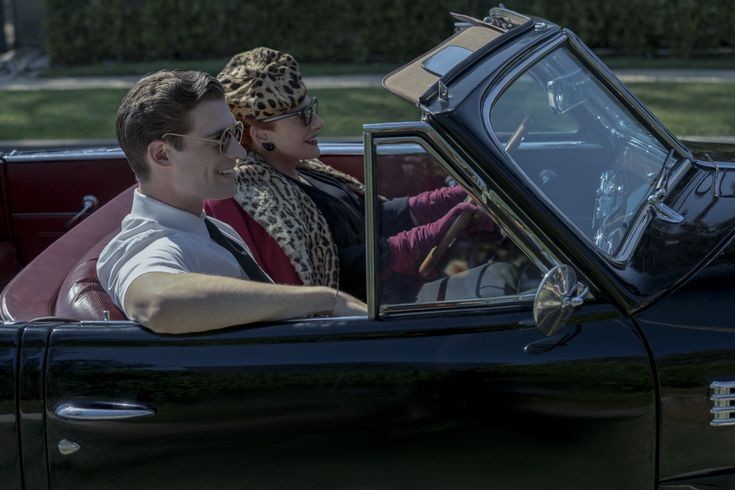 A good episode that’s powerful yet also, getting a little preachy. I like it’s themes though the execution seems a little too coincidental, especially with how everyone meets. Then again, from what we hear and gather about the industry: that’s Hollywood.

I also do like how Jack and Archie attain their goals by separate means and how hypocritical Hollywood is in itself. Behind the scenes, it’s well-known this process was less than wholesome.

I do wonder if the show’s more censored than it should’ve been as the series seems a little too hopeful, especially regarding such dark topics. I don’t think it should make light of things like sexual abuse but the series runs a thin line between acceptable sex work and who’s using sexual favors as leverage.

It’s a mixed message but entertaining if this is what you’re looking for.