‘Hawaii Five-0’ review: A pirate’s life for them

The perils of covering your average hour-long network television cop drama are probably unlike the perils of covering something you’d view on paid cable or premium network channels. If your episode of Game of Thrones or The Walking Dead is lower in quality than usual, the dip in quality is fairly negligible because the writing, for better or worse, remains somewhat consistent and doesn’t stray from the familiar. The same just cannot be said for shows like CSI, NCIS or Hawaii Five-0. When an episode of any of the aforementioned are bad, they’re bad — and you know they’re bad.

Hawaii Five-0 has spent a great deal of time letting us learn the characters of McGarrett and Dann-o, Chin Ho Kelly and his cousin, Kono. Last year, we had a running subplot featuring Chin Ho, Kono (and her husband, Adam – Ian Anthony Dale) and the menacing Gabriel Waincroft (Christopher Sean) who, after the ill-advised death of Wo Fat, has really become the next “big bad” the series has. The good news is that his feud with Kono and Chin Ho makes for some great television.

As we witnessed in the season finale, Kono and Adam finally tied the knot after about three seasons of turbulence involving Adam’s involvement with the Yakuza which saw the couple running for their lives throughout Asia. Of course, Kono and Adam just can’t have nice things and they get an unexpected visit from a pissed-off Gabriel. At first, Gabriel’s visit appears to be for revenge — until Adam drops a bombshell: Gabriel wants Adam to wire every penny of the “break-up money” Adam held on to for the Yakuza. Adam has a choice: either he does what Adam says (and the Yakuza eventually kills him) or he doesn’t and Gabriel kills him. 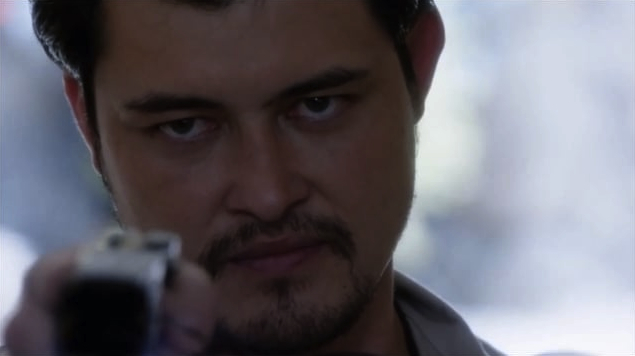 “But enough of all that!” says the show! “Let’s tell a goofy story about a pirate treasure buried somewhere in the mountains of Oahu!” Yes, Hawaii Five-0 seems content with making this a co-op, giving us a hokey Pirates of the Caribbean Waikiki invasion story complete with the same pounding pirate musical score and a dude who looks similar to Captain Barbossa. About 150 years ago, pirates raided the area and stole a really nice painting. As it turns out, this painting was, in reality, a treasure map showing the exact location of one of the greatest treasures the country has ever seen.

How does Five-0 get involved? It turns out that somebody has murdered a young novelist who was hot on the trail of the hidden treasure. The late Keanu Carson (the novelist’s name — proof this show is near giving up trying) had been reviewing video cassettes with interview footage featuring “Byron Washburn”, a 104-year-old man who claims to have been part of the crew that raided the island all those years ago. The murder investigation is on — but so is, by proxy, the treasure hunt. 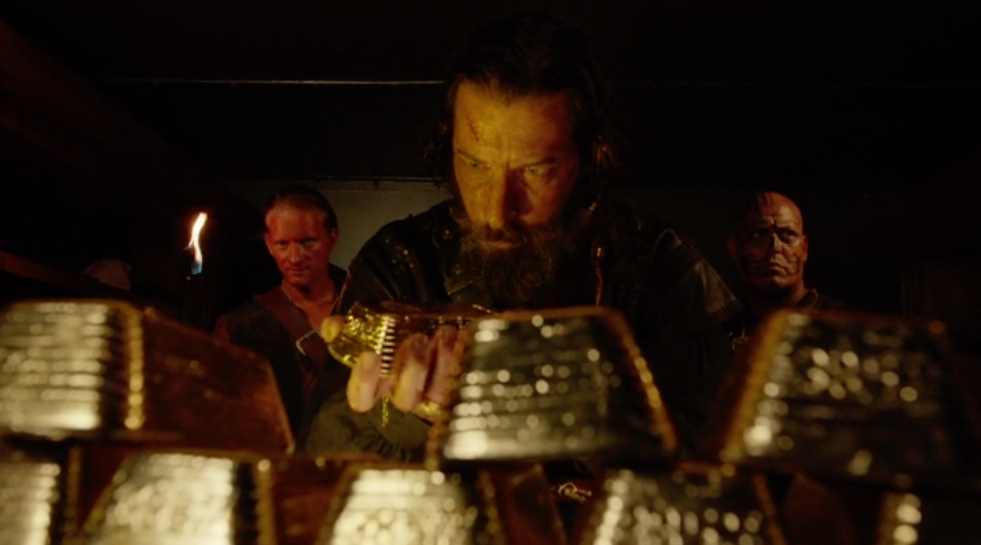 With Kono on her honeymoon, Chin Ho has elected Jerry to fill in and help out. This, of course, is right up Jerry’s alley and this episode doesn’t skimp on giving us cutesy moments between he and the rest of the cast. Not only does Jerry figure out that the famous treasure map painting, quite literally, has an “X” on it that “marks the spot” of the treasure, but he also educates McGarrett and his team about the type of tapes found at the Carson crime scene:

JERRY: That is a box for a Betamax tape, not VHS. VHS was actually eight percent larger than Betas. Incidentally, they were inferior in every way. Beta had better picture, better sound but, for some reason, the format never caught on with the general public.

DANNY: Is that a conspiracy, too?

JERRY: Nah…just a basic format war. Not everything’s a conspiracy.

Back at the Noshimuri household, Adam agrees to transfer all funds to Gabriel. Gabriel, however, doesn’t count on Kono getting free and rushing to a local bank to liberate her husband. As a result, Adam is critically wounded after Gabriel shoots him for the betrayal. It gets worse: Gabriel actually got away with all of the Yakuza money, setting up this season’s big story.

This is all well and good, but the season finale gave us a suspense-filled hour with the fate of the Hawaiian Islands at stake so even the Gabriel/Adam/Chin Ho story running in the background didn’t feel like a rip-off. While traces of fun can be found in the season premiere (we even get an Indiana Jones moment with a centipede crawling out of the eye socket of a human skull because it ain’t a treasure hunt without an awesomely gross moment in a tomb or a cave), this is the type of episode that’s usually reserved for the pre-Christmas slate of shows. It doesn’t “feel” like a season finale, so It’s awfully strange that we’re getting a run-of-the-mill episode with little or no personal velocity.

It’s even more annoying that the ending of “the hunt” has no pay-off: the “treasure” turns out to be an absolute bust with a chest full of tarnished kitchen and dining wares and that the raid (and resulting treasure) are downgraded to mythical status. Byron Washburn’s “pirate story” was possibly a hoax — and we’ll never know because he’s dead, which actually prompts Jerry to say, “Dead men tell no tales”.

Previous article
‘The Last Man on Earth’ Review: “Is There Anybody Out There?”
Next article
‘Quantico’ Review: Fun, as long you don’t think too hard