This episode gets psychological, taking a look at the origins of Doctor Harleen Quinzel, with a Review, Recap, and Podcast below. 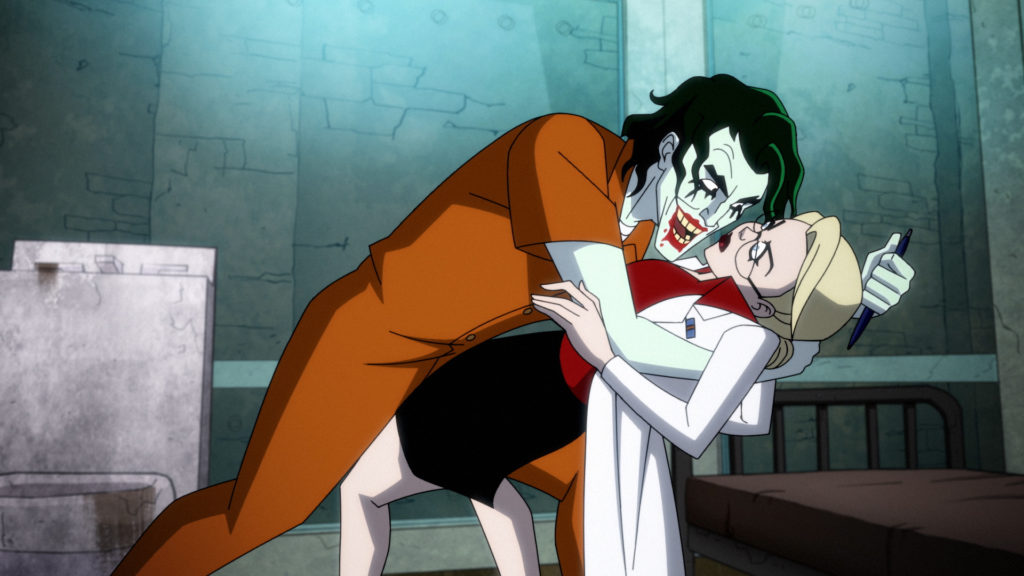 In this episode, we delve into Harley Quinn‘s past as a psychologist, including her first assessments with the Joker and her first encounter with a misanthropic Poison Ivy.

We also revisit an old friend who reappears from out of the shadows. Forcing Harley and Ivy to acknowledge just how much has changed, not just in the city, but in their respective interpersonal lives as well. The two becoming vastly different people from who they used to be.

This heartwarming flashback episode delivers on both depth and backstory, as we get to learn a thing or two about the heroes and villains prominently featured in Gotham City thus far this season.

Most importantly, this episode takes a look at Harley’s first impressions with The Joker — who very much steals the show — all in an emotionally sentimental take on traumatic origins, acts of kindness, and budding best friendships. 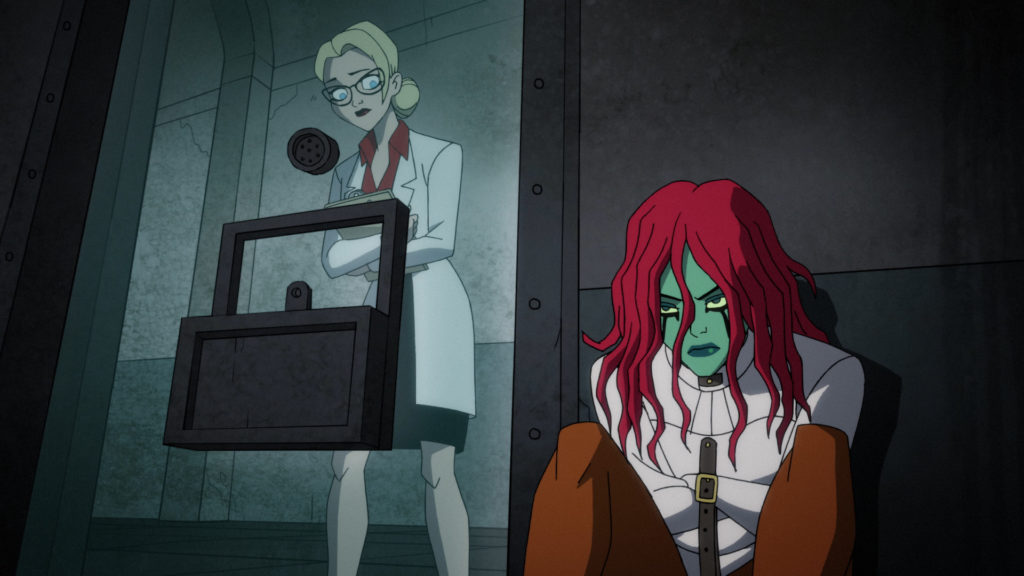 At Noonan’s (The Bar), Harley and Ivy play ‘Marry, Fuck, Kill,’ when, suddenly, Harley gets distracted by a bartender she believes is Joker. Ivy calls him just a typical boring white guy, but Harley takes a picture of him and then colors in his face. They confirm it’s definitely him.

Ivy wants to murder Joker, but Harley wants to sneak out. As they crawl on the floor to escape, Joker trips on the duo. They meet, and it’s revealed that Joker has become a normal person after falling into the ‘undoing acid’ last season. We learn that he has a girlfriend now, along with two kids that he’s adopted (the girlfriend’s).

Disgusted, the girls go to leave but are stopped by Joker, who picks up Harley’s bat and gives it back. Ivy distrusts the situation and still wants to murder Joker while making a ninja star out of a flower. Harley says she does not want to kill a normal person. Ivy says you are who you are at your core. Harley says she is wrong and wants to prove it.

This prompts a flashback to Harley’s first day at Arkham Asylum. She walks into the administration office to see Harvey Dent — the district attorney up for reelection — and Commissioner Gordon having a shirtless contest of push-ups and squats. She is happy they hired her because of her extensive work studying the Joker’s pathology, though it is revealed they only hired her because she’s cheap, and Joker has already killed his other shrinks. Harley is assigned to get Joker to reveal where the bomb is, though it’s obvious Dent only wants polls to reopen today for his D.A. reelection campaign in a callback to the original series.

At that moment, alarms blaze as some vines tear a guard into pieces. Another guard comments that the cafeteria had allegedly ordered living lettuce, something Poison Ivy utilizes until taken down by unsanctioned flamethrowers. Harley protests the deed and comments about prisoner rights. Gordon commands her to stop gawking and find the bomb.

Back to work, Harley walks past some of the infamous Batman rogues, including Killer Croc, Scarecrow, Calendar Man, Man-Bat, and a fully haired Riddler. She then checks on Poison Ivy and apologizes to Ivy for their harsh treatment of her, but Ivy brushes her off. Afterward, Harley checks in on and meets with The Joker.

Joker greets Harley as Puddin’ — her infamous nickname for the Prince of Crime —  though it is revealed that Joker thought he was calling out to Arkham’s in-house chef, Luigi, with his lunch, as Joker likes to eat dessert first. He misses eating at the cafeteria like a normal person.

The Joker soon calls out Harley’s thesis as fanfic. She tells him that she’s there to set the record straight. Joker knows she is only there to find the bomb. He plays with his mashed potatoes and disregards her. So, Harley, desiring to get on his level, goes inside his roomy and isolated cell. After some getting to know each other, he takes her hostage, but she fights back and gets away.

Moments later, Gordon tells her she’s done. She asks for another chance, and Dent doesn’t think they have a choice. But, from the shadows, Batman arrives and offers aid. He interrogates Joker, but the clown rubs in the death of Jason Todd to his face. Losing it, Batman badly beats Joker but still gets nothing out of him. Afterward, Gordon asks if Batman has plans — showing the beginnings of their friendship.

Taking command, Harley meets with Ivy, after discovering she and Joker went to group therapy together. Ivy reveals her grim view of the world: that people just aren’t worth saving. Harley disagrees and gets Ivy to reveal that Joker has family issues: which is something she can work with. When Harley visits a newly bruised and broken Joker again, she asks about his life growing up, grilling him on his daddy issues.

Joker reveals how he got his emotional scars. That his parents were wealthy yet negligent, and so Mr. Farris — his pet ferret — was like a brother to him. Inseparable until the day he walked in on his father sleeping with the maid. As a result, his father took Mr. Ferris away then beat the shit out of him, all while smiling.

Harley sympathizes and offers to help. Joker requests to have a normal meal at the cafeteria, tonight — as he doesn’t trust the ones in charge to keep their word. She agrees. He reveals that the bomb is in the heart of Little Italy. That night, Harley thanks Ivy and gifts her a tiny plant, which Ivy grows into flowers.

At Gotham, Batman rushes to Little Italy with Gordon as Joker gets to finally go into the cafeteria with Harley at Arkham. Joker treats it like an informal little date. Harley seeks to turn her thesis into a novel, as Joker realizes she never cared about the bomb, just herself. It dawns on Harley what’s actually happening; Joker reveals that Luigi, the cafeteria chef, is nicknamed ‘Little Italy.’ Luigi detonates, creating a hole in the wall to escape. 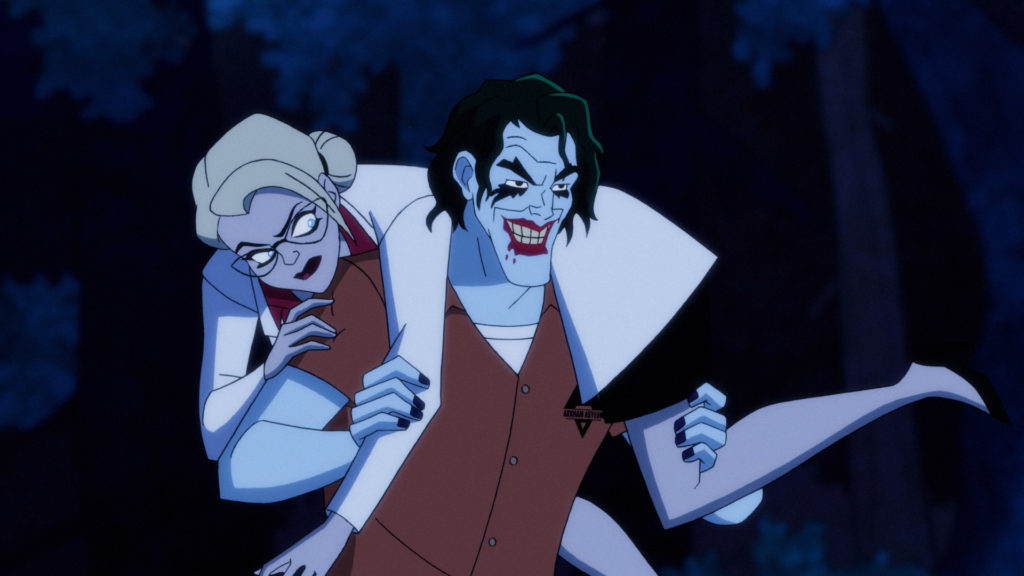 Joker carries Harley and says she’s the only one that understood the joke. Dent chases after with a squad, but they cannot take a shot without killing her.

Dent commands to do it anyway. The sniper shoots.

Yet, the two survive, thanks to Ivy protecting Harley with her plants.

When asked why, Ivy reveals no one’s ever given her a gift before. Harley thanks Ivy for saving her. Suddenly, the villains are surrounded by guards with flamethrowers, and it’s obvious that, though Ivy can keep fighting, Harley might die in the process. Ivy surrenders to keep Harley alive. When Dent walks over to congratulate her survival, Harley spits in his face, telling ‘Two-Face’ to fuck off, effectively creating his trademark nickname.

Back at the bar, Harley tells Ivy she changed her mind that humanity was worth saving back then. Ivy retorts that she didn’t change her, just helped her, as she didn’t always hate people.

She then reveals Mr. Ferris was her Ficus plant. That story was hers, not the Joker’s. This upsets Harley, as she’d gone years doing ferret themed everything for Joker. They wonder what to do about the reformed Joker and use Doctor Psycho to probe his mind to be sure he’s legit.

It’s revealed… that the Joker really has become a boring and kind person and father with no memories of before the Tower incident. Harley says bye for the last time but right as they leave the Noonan’s, they are caught by Harvey Dent.

Joker goes back to working at the bar. He sees a picture of his kids from the ‘best girlfriend in the world’ and maniacally laughs at a picture of the kids covered in sauce — hinting that a little bit of Joker is still there, though he’s mostly, still this new man. 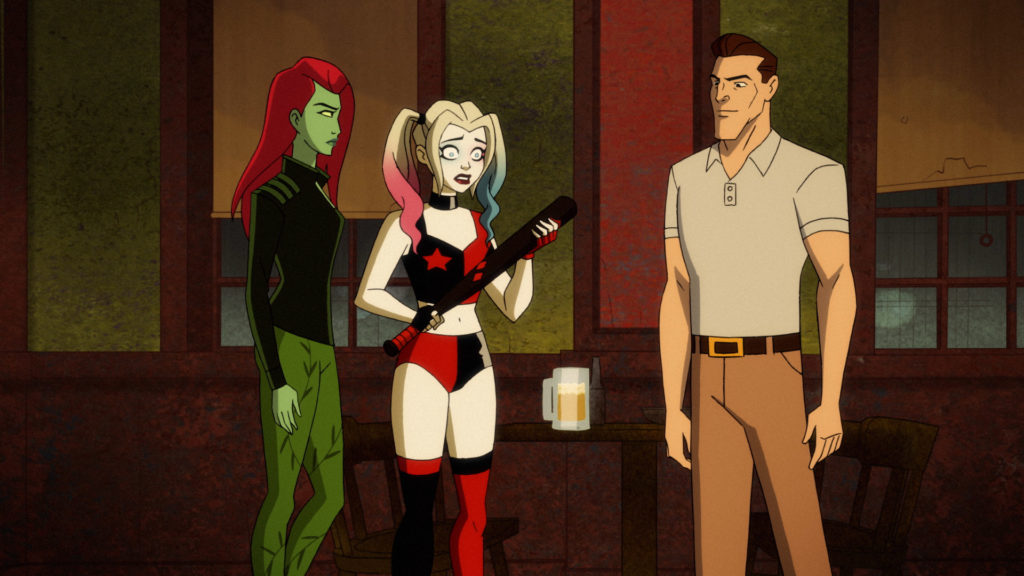 This was a really good episode that delved into some heartfelt moments between Ivy and Harley. Mainly, they’re not all that bad of people.

Though I’d be remiss not to give kudos to Joker as well, as his and Harley’s dynamic was acerbic yet foreshadowing, a set-up for the inevitable fates we know befall on them both. I also have to give it Alan Tudyk, who’s been nothing shy of amazing this season as Condiment King, Doctor Trap, Clayface, and now of course: The Joker.

Arguably the best episode thus far this season, in my opinion.

Previous article
What We Do In The Shadows episode 2.05 Recap – Unfinished Siphoning
Next article
‘Hollywood’ Recap Scene-by-scene: Episode 1 “Hooray For Hollywood”